Santa Fe is the capital of the province of the same name, with a population of 415,345 inhabitants and a territory of 3,055 square kilometres. It is located in the middle of an intricate network of river systems, which has been historically important for the city.

During the 1960s, the city set a national standard for its strong cultural influence. However, a lack of prevention strategies in its risk management approach, coupled with misguided political decisions, resulted in a series of floods that significantly affected the social and economic structure of the city.

With a change of government in 2007, political efforts changed to focus on remedying the situation and rebuilding the city. Santa Fe: Design Hub (2008) emerged as a result, and has continued for over 10 years. The condition of this port city, university city, and provincial capital, has been changed by the Strategic Development Plan. The approach has reinvigorated Santa Fe's social and cultural economic life, one marked by a large number of entrepreneurial initiatives with a high level of creative content. Indeed, the creative industry is one of the key management areas in the sustainable development of the city.

Following the 2007 floods, the city and its socio-productive fabric were severely affected by increased unemployment, urban violence, and general despair throughout the population. In 2008, the Strategic Development Plan was implemented, and was updated in 2015. By committing to the public with a partnership between State and society actors, clear lines of management were prioritized that promoted active citizenship to contribute to sustainable development, citizen coexistence, and improving quality of life. The Ministry of Culture (formerly the Directorate) was created, recognizing the strong potential of Santa Fe’s cultural ecosystem, a key step toward its recovery. Cultural policies were outlined that recognize cultural diversity, strengthen citizen cooperation in developing regional projects, and promote economic development through creative industries. The Cultural Industries Programme was also established. Its mission is to aid in the design, implementation, and evaluation of public policies related to culture-based initiatives, thereby serving the different sectors of production and distribution for goods and services. After an initial diagnosis of the Design Sector, a strategic policy was put in place to carry out specific actions that entrepreneurs had been previously carrying out in a non-systematic way. The result was “Design Santa Fe”, the predecessor project to “Santa Fe: Design Hub".

Emphasis was placed on management lines that promote the construction of active citizenship.

In partnership with the National University of the Littoral, the incubator for culture-based ventures EXPRESIVA was created in 2010, representing a significant 65% of the sector.

Alongside Santa Fe Activa and the Entrepreneurs Club, “Santa Fe: Design Hub” is one of the most emblematic projects in the city's Resilience Strategy. The project is built on a framework of international cooperation with the 100 Resilient Cities Program under the Rockefeller Foundation, located in the Mercado Progreso, a Cultural Industry Market, with international and local participation in the Network of National Creative Cities, in the Mercosur Cities Network, the EU’s AL-Invest 5.0 programme, and the UCLG Culture 21: Actions Pilot City Programme.

Through ongoing work with creative economies, Santa Fe: Design Hub has been developed with a focus on creating a city that is resilient to physical, social, and economic challenges (100 RCs Network). The project has been established in accordance with the Commitments of Agenda 21 for culture and the UN’s 2030 Agenda.

Strengthening the Design Sector can be done by seeking out entrepreneurial initiatives, thereby creating goods and services that offer unique, competitive advantages. In 2017, the project began with 40 initiatives, and currently involves more than 1000 entrepreneurs. Its growth involved constructing innovative spaces such as the Interdisciplinary Design Laboratory, and promoting spaces for governance such as the Design Centre. This also included the revitalization and reuse of landmark spaces such as Mercado Progreso and Santa Fe (Belgrano) Station.

After noting a strong level of participation by women, a state policy has been proposed that would empower them as protagonists within the value chain in the development of their organizations. This is particularly important given the fact that 90% of the beneficiary enterprises are led by women.

With respect to education, the project has helped create an effective and transformative learning environment. It has separated know-how from an applied knowledge about products and services themselves, incorporating innovation based on a strong link with local cultural heritage. Additionally, there are instances of eco-design projects that aim to propose better recognition for the cultural and natural landscape.

Activities are aimed at the professionalization and ongoing improvement of productive and commercial capacities.

These actions are framed within a policy of ongoing government work geared toward consolidating public-private partnerships and good entrepreneurial practices, as well as promoting equal opportunities as tools for peace and social cohesion. The initiative aims to contribute to reducing inequality by working on the Creative Neighbourhoods project alongside socially vulnerable youth. Successful strategic alliances with the academic world, incubators, and specialized national or international centres have been vital in this line of action.

Beneficiary groups include more than 1000 entrepreneurs, artisans, artists and design professionals, universities, tertiary communities, companies and industries, and citizens. Through the Ministry of Culture, the Ministry of Strategic Development and Resilience, and the Agency for Cooperation, Investment, and Foreign Trade, the Municipal Government of Santa Fe works in an ongoing strategic alliance with 18 different local, national, and international entities. These include the Barcelona design Centre, IDEAR, the Municipal School of Visual Arts, the Faculty of Architecture, Design, and Urban Planning such as the National University of the Littoral or the Catholic University of Santa Fe, among others.

The main goal is to use the design sector to promote regional economic development, social cohesion, and citizen participation in city building. This can be achieved through the promotion of creative economies, entrepreneurship, access to information, and innovation as features of local identity. This approach strengthens the project as a driver of sustainable development, fostering crossover and growth with the arts, artisans, trades, and industry through actions focus on training, associativism, and commercialization.

As a thriving city that is encouraged to innovate and transform, Santa Fe aims to position itself as an International Design Centre, a regional development leader, and a promoter of cultural policies.

The programme aims to provide to local entrepreneurs with innovative projects that require assistance for their start-up, uncubation, growth, and internationalization.

Plan for Strengthening Design Industries Across the City and the Region Through the European Union Bankruptcy Fund, AL-Invest 5.0: Joint management with the Barcelona Design centre, the Industrial Union of Santa Fe, the Foreign Trade and Cooperation Agency for the City of Santa Fe, and Expresiva, which facilitates actions with the national and provincial governments

Santa Fe Design Fair: 10 Christmas and 10 winter events held from 2008 to 2017 at Santa Fe (Belgrano) Station with the selection of 250 projects that affected more than 350 designers Year-long continuity at Mercado Progreso with a weekly fair.

Phase 1:  Improvement of Technical and Management Skills Through Training. Professionalization and ongoing improvement of commercial and productive capacities

Phase 3: Improvement of Marketing Tools and Access to New Markets. Focus on activities aimed at establishing bodies for the commercialization, promotion, and communication of products and/or services offered by micro, small, and medium enterprises (MIPYME) at the local, national, and international levels.

Based on MCSF follow-up programmes, it was noted that entrepreneurs have difficulty marketing and promoting their products. The biggest obstacle is the informality of some ventures that undermine sustainability processes and hinder access to relevant information like product costs, MSRP, or other details that would improve the implementation of public policies.

The Santa Fe: Design Hub project has set a regional and national benchmark for managing the sector, which drives and follows the growth of its organizations. It helped build a solid foundation for the city’s entrepreneurial development, and was instrumental in outlining the Santa Fe Activa and Entrepreneurs Club Programme, by expanding the scope of the city to include the broader metropolitan area and the central region (Córdoba, Santa Fe, and Entre Ríos).

The project improved technical, productive, and commercial capacities, which was reflected in the strengthening of various economic sectors. It also developed actions that strengthened the city’s cultural initiatives. This has had a notable impact across the entire value chain, resulting in the strengthening of sectors and trades associated with design, such as artisan crafts and arts.

The project has set a standard across the regional as a space for commercialization, visibility, circulation, and training. It has established networking and associativism, which both help to consolidate human resources that incorporate innovative approaches and sustainable production processes. Together these provide new solutions to the region’s environmental, infrastructure, landscape, and social issues.

It has also led to the development of policies with a gender focus, highlighting the role of women who lead 90% of the participating enterprises.

Additionally, based on an inclusive cultural policy, access to quality training was facilitated in response to the population’s social heterogeneity.

The work done over the last 10 years has helped focus on women as protagonists who make up 90% of entrepreneurs. This made it possible to develop policies with a gender perspective, further emphazing the important role of women.

The Statistics Programme annually produces the “Status of Santa Fe” report, which is a presentation of the city’s assessment and an evaluation of socio-economic indicators. The Unique Entrepreneur Registry, a tool that uses surveys and interviews to incorporate representatives of MIPYMEs into the social economy ecosystem.

The trust established through ongoing work with entrepreneurs, the existing level of diverse design education, have all created a scenario that is conducive to the success of this public policy. Interdisciplinary work is one of the keys to success and a strengthening factor for both the creative ecosystem and the value chain.

Alliances with institutions, government agencies, and non-governmental organizations have facilitated stimulating and awareness-raising actions, generating management proposals with a greater scope and increased funding. Resources from the Agency for International Cooperation have also been crucial.

Santa Fe was a candidate for the third “UCLG Mexico City – Culture 21 International Award” (November 2017 - May 2018). The jury for the award drew up its final report in June of 2016, and requested that the UCLG Committee on Culture promote this project as one of the good practices implemented under Agenda 21 for culture. 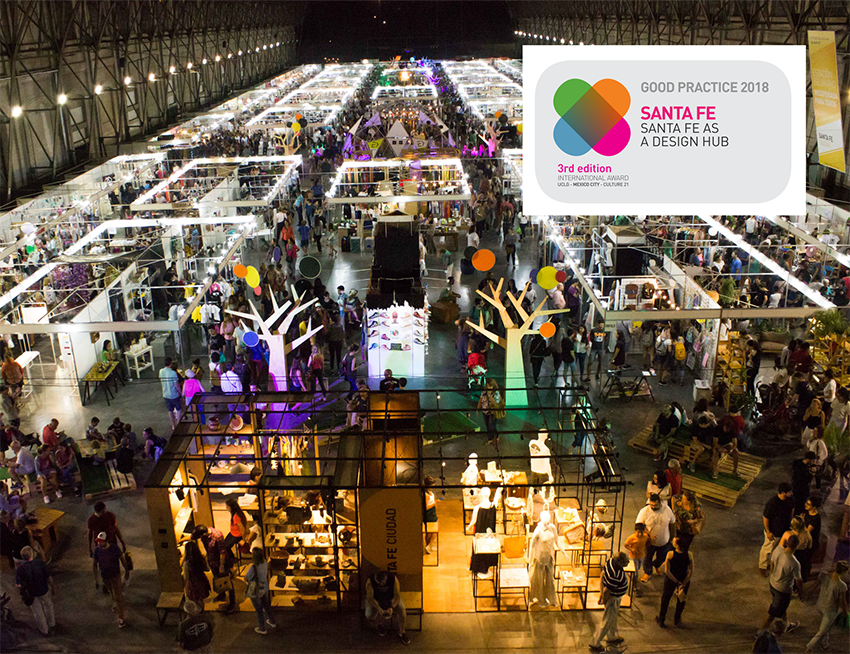