Val-de-Marne is located in the "inner" suburbs to the southeast of Paris, with a population of 1.35 million and an area of 250 square kilometres. It is characterised by its social diversity, with densely populated areas, surrounding zones, its affluent middle class, and its sometimes poorer working-class. It has a large immigrant community, with a history partially linked to post-war migratory movements. On a social level, there are notable feelings of solidarity and banishment. Furthermore, there are sometimes deep divides, with high levels of unemployment and social uncertainty. However, at the same time there are also examples of resilience such as the emergence of countercultures or strong expressions of identity. The confluence and many small branches of the Marne and Seine Rivers through urban areas are a strong part of the area's heritage. The H2-Oh! Festival was first held in 2001, based on the fact that rivers and creeks played a significant role in developing the area, and it was after bathing was prohibited that cities subsequently allowed industries to take over the cultural heritage connected with the river lands. This has resulted in environment degradation and a lack of interest in the issue of water management. The H2-Oh! Festival is a movement to recapture the area both physically (the rivers and banks) and politically (water management). While Val-de-Marne has chosen to directly manage sanitation through public administration, there is the addition issue of helping users of sanitation to become citizens who are aware of the impacts of their behaviour, and of urban development models.

The festival focuses on establishing a shared report on water, based on the relationship between people and their habitats, as well as respect for resources and common goods.

In keeping with the principles of the H2-Oh! Festival, Val-de-Marne has self-identified itself as the "Department of Water", and has brought together dozens of water stakeholders around a "Blue Plan" to improve water management in all areas. Innovative policies have been developed for the management of rainwater, the restoration of buried urban rivers, and the development of riverbanks.

The aims of the cultural policies of Val-de-Marne are to ensure access for everyone to art and culture while promoting heritage, contemporary art and performance art, reading and interest in books, cinema and audiovisual media, as well as promoting scientific culture. Cultural policies are also centred on two main strategic focuses. Policies also seek to manage a contemporary art museum, as well as to organise major events for street arts with the H2-Oh! Festival. The H2-Oh! Festival is part of a qualitative vision of local development, in which the cultural project is built into other public policies, including participative democracy, the struggle to maintain academic success, and ambitious water management policies. A unique governance that, from the initial stages, connects various levels of regional authorities (municipalities and departments) with citizens through association representatives. Every year, a solidarity project will be chosen from one city, or association, from around the world that is linked to water, or connected with cultural projects. Some years there shall be a guest of honour which will encourage planning and debate among relevant local stakeholders (Ganges, Niger, Ebro, Saint-Laurent, Danube, etc.). The H2-Oh! Festival promotes cultural diversity through dialogue and discovery of "water cultures". The city favours diversity of cultural expressions, as a crossroads of those disciplines and backgrounds within the programme. It devotes space to an intercultural dimension, through long-term cultural action projects, emphasising the value of immigrant populations. The H2-Oh! Festival promotes access to the cultural world of water, and the upholding the core principle of free access for all. Artist residencies and coordination with the education programme encourage the expressive capacities of populations that are under-represented in the area of culture.

The festival focuses on establishing a shared report on water, based on the relationship between people and their habitats, as well as respect for resources and common goods belonging to all humankind. It also works to unify contribution, encourage expression, and encourage the sustainability of projects.

The project will transform a "learned" ecology into an ecology based on appreciation and understanding, created by individuals through a personal or collective experience. The latter may include: the passenger cruise (about 20 passenger boats are chartered during the festival, each passenger can disembark or join at each stopover), trying sailing (the festival involves the boating clubs, mainly canoe and kayak, but also sailing and rowing, in addition to their volunteers and their qualified instructors who welcome and supervise newcomers), and the development of all types of water transport, while encouraging mobility along the banks such as hiking, cycling, free bike loans, and paths). Residences, facilities, performances, and shows are all set up along the water. These proposals showcase the territory from a new angle, initiating a considerable transformation of the landscape that questions people's relationship with the environment.

The project will transform a "learned" ecology into an ecology based on appreciation and understanding, created by individuals through a personal or collective experience.

Projects are carried out in the medium-term in order to establish real links with the public based on trust, communication, and sharing. The festival fuels the collective imagination in a powerful and effective way. It empowers individuals because it offers them a unique experience; one that directly concerns them and their environment. Street arts have a strong role in inclusion; a genuine capacity to include alienated, fragile communities that do not have much exposure to cultural spaces. Every year the festival welcomes some fifteen companies, either in-residence or smaller forms, for creations or performing shows. The region ensures sanitation survey works and the establishment of dedicated learning spaces, such as Water Resource Centres at every stop. These pedagogical activities are carried out over the two days of the H2-Oh! Festival. They are combined with education and citizen activities that are geared towards students. It included an educational cruise for 5000 children and offers scientific mediation for one semester with 24 classes. Additionally, it involved the Université populaire de l’Eau et du Développement durable (UPEDD) [Popular University of Water and Sustainable Development] which has attracted nearly 20,000 people over the last 15 years. These projects are based on practices of popular education and the scientific method, in that they foster consideration of different types of knowledge, encourage openness to questions about society's choices relating to development, and much more. It concentrates on strategies that spark collective debate on issues related to water management, and encourage participants to draw on their personal experiences. In this way it legitimises alternate perspectives and subverts the dominant discourse.

New governing bodies have been established to develop water management policies, with the notable adoption of the Blue Plan. There has also been an impact upon the priority given to management or infrastructure projects, such as the reopening of the Bièvre, and the regeneration of riverbanks. The awareness of the entire executive branch of the department of environmental concerns has generated an unprecedented involvement in the COP21 in Paris.

Every year, more than 700 volunteer applications are submitted for only 200 positions in greeting the public and pier security.

The festival has created a strong regional identity. Nearly half of the population has participated at least once. A study carried out in 2012 showed that public interest was committed, while it also continued to grow.

The H2-Oh! Festival has had an impact upon tourism policies by creating a strong argument for its inclusion as part of a European Cultural Route. This contributes to the debate on projects likely to support new initiatives in the Grand Paris project, replacing the river heritage and cultural policies at the heart of metropolitan city planning. This has a significant impact on accessibility policies by allowing many institutions to welcome disabled people to participate in activities. The festival also impacts cultural life in the region, particularly in the area of street arts as they are a central focus. In fact it has an effect on all environmental associations, and on environmental awareness.

Between 2007 and 2013, twelve studies, surveys, or assessment audits were carried out. In 2011, the festival notably implemented the environmental management system of the Val-de-Marne Environmental and Sanitation Services Department. In 2012, the scope of ISO certification 14.001 expanded to include the region, and was renewed in 2015.

The project envisaged that, as of 2017, the H2-Oh! Festival would be organised by the Etablissements publics territoriaux (EPT) [Regional Public Establishments] of the Metropolis of Greater Paris (MGP), together with the region, and funded by corporate sponsorship as well as the MGP. These prospects are still being pursued.

The festival has created a strong regional identity. nearly half of the population has participated at least once.

Val-de-Marne was a candidate for the second "UCLG Mexico City – Culture 21 International Award" (January - May of 2016). The jury for the award drew up its final report in June of 2016, and requested that the Committee on Culture promote this project as one of the good practices to be implemented through Agenda 21 for culture.

This article was written by Olivier Meier, Director of the H2-Oh! Festival, Val-de-Marne, France. 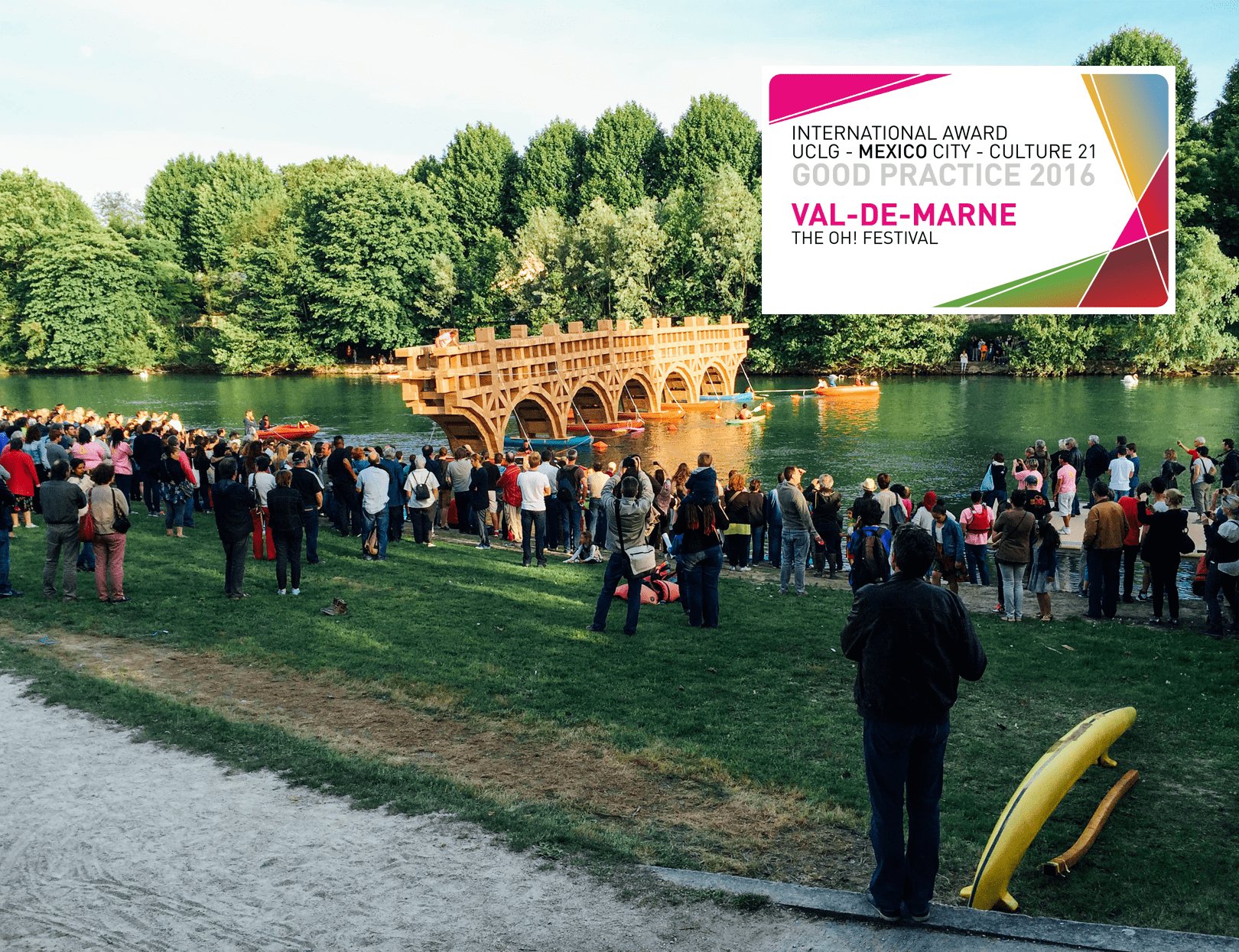