Qingdao is an important coastal and international port city. As of 2018, the city has seven districts and three countylevel cities and a permanent population of 9394,800. Qingdao is the economic centre of Shandong Province, the main node city of the economic corridor of the Belt and Road New Eurasian Continental Bridge and the strategic fulcrum of maritime cooperation. Qingdao is also the ‘City of Film’ in UNESCO’s Creative Cities Network.

From the end of 2007 Qingdao saw the decline of the manufacturing industry, as many foreign-funded enterprises had begun to move to the western part of China. Additionally, during the pursuit of the rapid expansion, Qingdao had ignored sustainable development.

In 2006 the local government announced the ‘Implementation Opinions of Qingdao Cultural Industry Development Year 2006’ and in 2008 they issued the ‘Several Policies on Accelerating the Development of Cultural Industry’, marking the local administration’s increased interest in the cultural and creative industries.

The government of the Shinan District of Qingdao and the Industrial Design Association of Qingdao took the lead in launching the construction project of the creative industrial park in 2005 and in 2006, with the encouragement of local government, Qingdao Qilong Culture Co., Ltd was founded to transform the discarded Qingdao Embroidery Factory into Creative 100 Cultural and Creative Industrial Park (Creative 100). In November 2007, the park was officially opened with 62 enterprises.

The main goal of Creative 100 is to replace old growth drivers with new ones in order to speed up structural improvement and to fill the cultural void with innovation.

The main goal of Creative 100 is to replace old growth drivers with new ones in order to speed up structural improvement and to fill the cultural void with innovation. The project aimed to reduce the pressure of employment and promote the cultural governance and sustainability, enabling Qingdao to establish a unique creative brand and local cultural art ecosystem.

Creative 100 created the ‘roadshow + maker’ entrepreneurial incubation model. After being approved by the experts, creative teams can enter the incubation accelerator and receive entrepreneurial coaching from experts, after which they can also cooperate with each other.

As of 2016, the nursery had successfully supported more than 600 entrepreneurs and incubated nearly 100 startups. The industry involved multiple fields such as online media, advertising art, visual design, and gift design. In addition, the success rate of entrepreneurship of other entrepreneurs trained in this space had also reached more than 90%.

Creative 100 invested a total of 20 million yuan and in 2011 it recovered all investment and began to achieve profitability. However, like many other cultural and creative industrial parks, skyrocketing rent has been a challenge. Other challenges faced by the project included a lack of creative professionals and creative clusters that hindered the development of local creative industries and an insufficient supporting policy system.

As of 2016, the nursery had sucessfully supported more than 600 entrepreneurs and incubated nearly 100 start-ups.

Bureau of Labor and Social Security of Shinan District and Qingdao Qilong Culture Co., Ltd jointly invested in and built a creative entrepreneurial platform. Start-ups enjoyed rent reduction and exemption, entrepreneurial subsidies, tax policies and other preferential policies. Their creativity and service drove the overall development of cultural creativity in Qingdao and Shandong Province. Total occupancy rate of the park reached 98%, of which cultural and creative enterprises accounted for 93%. Creative 100 created an annual output value of 300 million yuan and increased the employment of nearly 3,000 people.

Participants of the incubation base were selected by universities and through competitions. The project is affiliated with the Department for Culture, Media and Sport (DCMS), the Creative Industry Department of Queensland University of Technology, Australia and Australian ARUP Planning Group. Foreign experts regularly provided professional training and there were regular academic exchanges with other creative institutions.

Creative 100 provided a large platform for cultural and creative industries, established a good cultural ecosystem, encouraged enterprises to move in, and attracted creative workers to settle in Qingdao. Creative 100 successfully brought art into the lives of ordinary people and cultivated a new mode of art consumption.

Total occupancy rate of the Park reached 98%, of which cultural and creative enterprises accounted for 93%.

In addition to the 2006 and 2008 local government policies on cultural development, the national government enacted ‘Administrative Measures for National Cultural Industry Demonstration Parks (trial)’ in 2010.

As the first creative industrial park in Shandong Province, Creative 100 is the pioneer of industrial upgrading and transformation and the model of urban renewal and sustainable development. Qingdao developed the cultural dimension of sustainability following the principles and commitments of this Agenda 21 for Culture. The local government also actively explored emerging economies, adopted cultural policy on entrepreneurship, public culture and cultural responsibilities, and considered the relationship between cultural diversity and citizenship.

Creative 100 moved out when the rent contract expired. The new operator continued to run the park under the name of New 100 Creative. Following predecessor’s experience, New 100 Creative continued to resolve the contradictions between operation the cultural and creative industry park and the commercial operations, and ensured that the core of the emerging economy remained unchanged under the supporting policies of government. Creative 100 shifted to Cultural and Tourism Derivatives Base, continuing to support Qingdao’s cultural and creative industries.

Qingdao was a candidate for the third “UCLG Mexico City – Culture 21 International Award” (November 2019 – May 2020). The jury for the award drew up its final report in July of 2020, and requested that the Committee on Culture promote this project as one of the good practices to be implemented through Agenda 21 for culture. 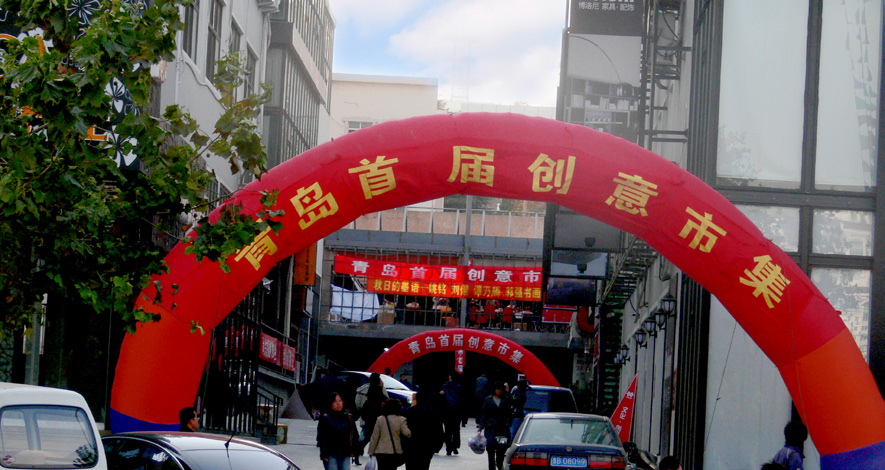