Seferihisar is a harbor town situated 45 km away from Izmir, on the Aegean coast in Turkey. With an area of 386 km2 and a population of 36.000, agriculture and fishery has been the main livelihoods of Seferihisar with tourism, developing rapidly in the recent years. The city is famous for vegetable fields and orchards (tangerine, olives, grapes, tomatoes, aubergines, artichokes, pomegranates). However, due to the unproportioned revenues of tourism compared to the agriculture, farmers have been selling off their fields and farming is in decline. Implementing new agricultural policies would not only support reaching sustainable development goals, but also preserve cultural heritage. Seferihisar initiated the project to create awareness on healthy food sources particularly in such a city with livelihood based on agriculture and tourism. Farmlands are on the wane by day due to low profits of traditional farming. Agricultural products from Seferihisar are often sold in public markets in big cities. Therefore local and rare products would draw shoppers’ attention providing more income for the farmers.

Additionally hybrid seeds have been commonly used in Turkey in the last decade. Because they are only productive for a year, farmers must buy seeds every year instead of saving a portion of previous years’ seeds for replanting (traditional method). Therefore, hybrid seeds are a financial burden for the farmers. Additionally, genetically modified seeds are allowed to be planted in Turkey for animal silage. The long-term health effects of hybrid seeds are not carefully examined. Possible health problems like cancer linked to hybrids or genetically modified seeds would be a devastation for a low-income agricultural community like Seferihisar. In rare cases, hybrid seeds are also reported to spoil the natural fauna, which will result in infertility of the soil in the long term.

The general aim of the program is the sustainability, promotion and popularization of domestic seeds and the barter culture among citizens.

Seferihisar implemented various policies and projects to reach its sustainable development goals. Improving the agriculture would not only improve farmer’s life quality, it would also make way for providing healthier nutrition for all citizens, construct a sustainable economy and prevent the migration of the youth to bigger cities for better employment opportunities.

The first settlement is Seferihisar dates back to 2000 BC and the region was subjected to numerous conflicts and destruction ever since. The municipality applied various cultural policies in order to prove that culture is the fundamental item of civilization. Seferihisar Municipality renovated historical structures, supported the excavations in ancient city Teos. Apart from historical works, it organized other events, such as the Sustainable Fishery Project, the project Children Municipality or the International Drama Meeting. The installation of information kiosks enabled the citizens in rural areas to handle many municipal duties locally.

The municipality believes that education provides people a better sense of nature and environment. Local education facilities would prevent the migration of the youth to bigger cities in pursuit of better education and employment facilities. Thus, cultural policies are closely related with the Seed Swap Festival due to its aims, features and approach methods to cultural heritage. Finally, the project Seed Swap Festival is coherent with Agenda 21for culture sustainability and exchange good practice missions.

Improving agriculture would not only improve the life of farmers, it would implicate healthier nutrition for all citizens, construct a sustainable economy and prevent migration of the youth to bigger cities for better employment opportunities.

The general aim of the programme is the sustainability, promotion and popularization of domestic seeds and the barter culture among citizens. Thus, this programme has prompted information exchange by farmers, citizens and consumers. Within the frame of the programme, by planting native seed varieties, the agricultural community can keep up traditional, low-cost agricultural practices, so that the community and local culture would survive.

Seferihisar Municipality’s own equity capitals developed the programme. There are three main groups of citizens who primarily benefited from the project:

Thanks to the new product varieties, media coverage and higher sales, farmers did not give up hope for agriculture.

The local government of the town gained a great reputation by creating awareness on caring for natural heritage and promoting sustainable nutrition. Municipality focused on new nature-friendly projects and increasingly continued in accordance with the programme. All employees realised the difference before and after the programme so they behave according to this new situation

The value of natural heritage and swap culture was enhanced non-commercially by the project. Youth, students and tourists received a lot of information. Furthermore, project has brought in new culture representatives. They all, as citizens or opinion makers like development cooperatives, seed banks and organic agriculture society’s presidency, behave voluntary cultural and natural ambassadors throughout the country.

Within the frame of this awareness, citizens have initiated the native seed campaign so they have become voluntary cultivators for us to maintain the Seed Swap Programme. Moreover, travellers often stop by İzmir. They can exchange genuine seeds and the city converted into a natural plantation and attraction centre.

Seed Swap Festival is a programme in progress based on the continuity and sustainability accordingly the scope of work.

The city of Seferihisar was a nominated candidate for the second 'UCLG International Award - Mexico City - Culture 21' (January-May 2016). The awards jury produced a final report in June 2016 and asked the UCLG Committee on Culture to promote this project as a practical example for the implementation of Agenda 21 for Culture.

This factsheet was put together by Dilek Ozkan, Translator – Project Responsible, Izmir, Turkey. 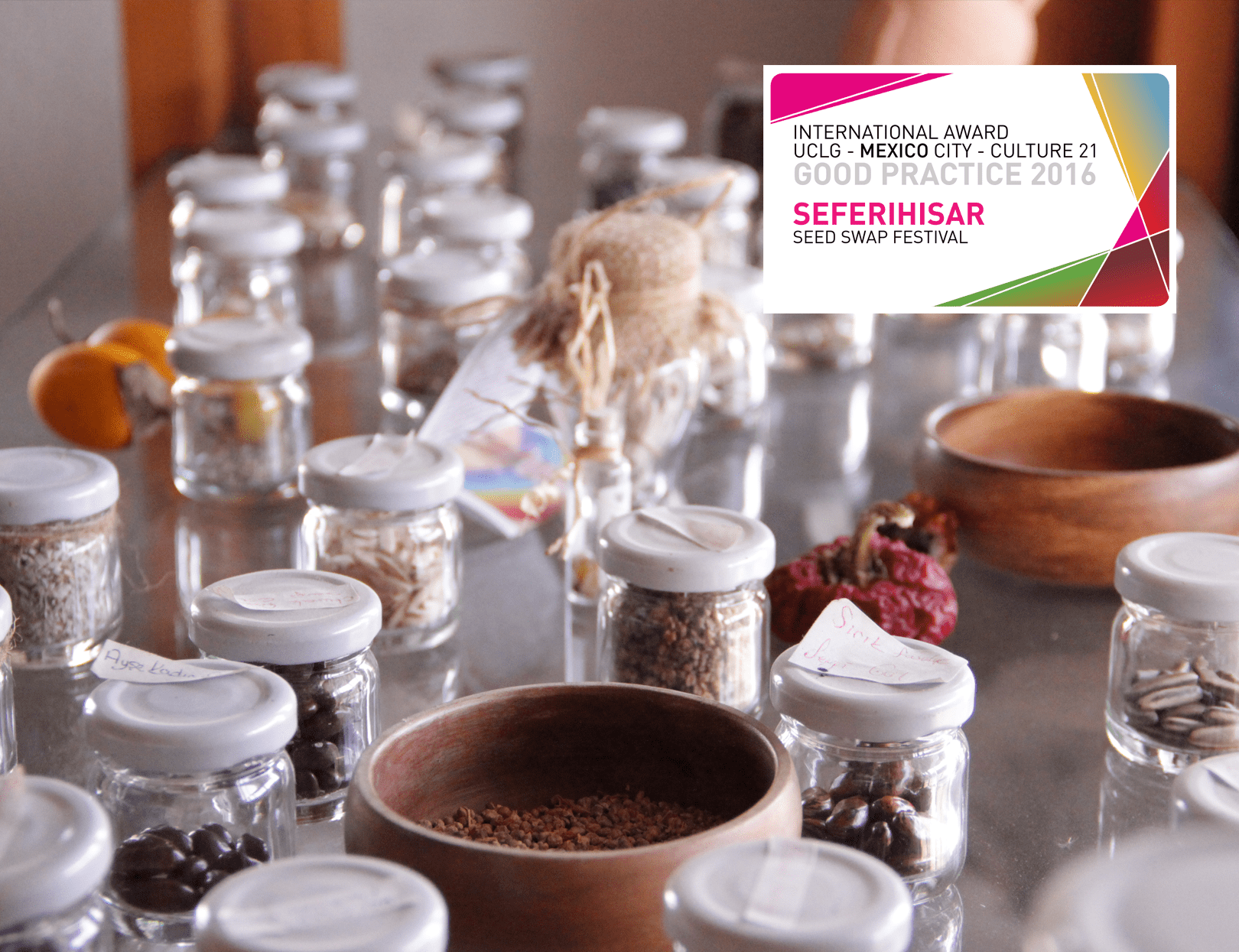