The Province of Azuay, located in the southern part of Ecuador, has a population of 712,127 according to the 2010 INEC census. It is one of the main administrative, commercial, and economic centres of Ecuador, as well as one of the country’s most important tourist destinations. The current government has prioritized the protection and conservation of the environment and water sources, support for agroecology, road improvement, revitalization of ancestral culture, and strengthening tourism.

As part of its initiative to revive ancestral culture, the Prefecture of Azuay has developed a program for bringing back the ancestral celebrations known as the Raymikunas. The Raymikunas help create visibility for Andean knowledge and their world view, which values the four elements of life (fire, air, earth, and water), while also trying to revitalize their identity among Azuayans.

The four Raymikunas are held in Ecuador with different epistemologies and ethnography related to music, dance, gastronomy, and ancestral medicine. According to the lunar and solar calendars, it is focused on four stages: planting, sprouting, collecting soft grains, and the final harvest.

The festivities held are:

The Raymikunas are ceremonial agricultural celebrations of rituals performed in Valdivian culture five thousand years before the inca civilization did.

The Raymikunas are ceremonial celebrations of agricultural festivals. While these names were coined by the Incas, their origin dates back earlier. In fact, there are records in Valdivia Culture showing that they were celebrated five thousand years before the Inca civilization. Due to their historical and ancestral significance, wider public participation is important in safeguarding these traditions. A state policy is also vital to help continue, preserve, and disseminate such celebrations, while maintaining their authenticity and uniqueness within the current historical and geographical space.

To this end, Azuay Prefecture has adopted an institutional policy that aims to revive this intangible heritage and promote nationwide, as well as international, promotion and dissemination to meet the following objectives:
(1) reinvigorate ancestral cultural identity, (2) to continue the pre-Columbian development that was halted by colonization, (3) to present the Raymikunas as an option for tourism development or as an alternative to mining and quarrying processes.

The main goal of the project focuses on raising awareness of our own cultural values. Despite being replaced by colonial religious celebrations, these rituals and agricultural celebrations can teach us the immense wealth of the rural world and allow us to create and improve local, national, and international tourism.

All Andean festivals are related to the agricultural cycle and solar time, that is cyclical and non-linear. The Andean year begins in September and ends in June, and their calendar is made up of the following festivities: Time of fertility for a selected woman (“ñusta”, or Incan princess) to offer to the deities of the earth and the cosmos.

Month of celebration for women and the moon (Mama Quilla). Sowing season, when seeds are deposited in the Earth to be carried in her womb for several months - a comparison with women and fertility. Pilgrimages are made - even Christianity has promoted pilgrimages and masses. People also visit Catholic churches built on the sites of ancient temples of Indigenous populations. At some sacred sites at the start of plantings, children roll in the earth to remove bad energy and give thanks.

Since the beginning of the current municipal administration, three of the four festivities have been held in the city of Cuenca to revive their celebration. This is significant as it is the largest urban centre in the Province. Pawkar Raymi was scheduled to be held in Marchin the Gualaceo Canton. However, it had to be postponed due to COVID-19.

It aims to have a provincal, regional, national and international reach.

It is hoped that the ancestral celebrations will connect with the entire population of the Province of Azuay. Additionally, a regional impact is expected, attracting citizens from the Austro (or southern) provinces, as well as both national and international reach.

The first phase of the project took place in the city of Cuenca. Its next phase focuses on bringing the celebrations to the different cantons, working with their mayors for greater engagement with rural populations.

This project opens the door to the creation and development of new projects based on ancestral customs and traditions, as well as the integration of urban and rural environments.

The main impacts of the project have been the recovery of lost identity, the promotion of ancestral celebrations, generating broader awareness of rural populations among city residents, and reviving essential elements of the Andean world view.

Environmental balance is important for the project and the provincial government, including the survival of humans and animals, respect for the environment, climate change mitigation, conservation of water sources, protection of culture in all its forms, and gender equality. This perspective can lead the region to a process of sustainable development centred on tourism that strikes a harmonious balance between human beings and nature.

The project contributes to reviving this shared collective identity in urban space, while valuing interculturality, a sense of belonging within the region, and its historical ancestry. The ancestral celebrations also show the leading role of primarily rural women both in rituals and in agricultural production, which promotes and directly influences the province’s economic development.

The flow of local, national, and international tourism will be evaluated through surveys and statistical data to measure the impact generated by the Raymikuna celebrations. There will also be an ongoing assessment of the cultural policy that was implemented. At present, the project is in its first phase, with continuing analysis that is particularly focused on the authenticity of recreating the celebrations. It includes the public and private sectors, as well as the participation of rural district communities and the province’s different cantons.

The project contributes to reviving this shared collective identity in urban space, while valuing interculturality, a sense of belonging in the region, and its historical ancestry, whic is rich in knowledge and skills.

Participation by inhabitants of the province of Azuay is the primary factor for success, particularly because the Raymis festivals hope to revive ancestral identity. The project is focused on making these events into mainstays of the region, in accordance with Ecuador’s Cultural Heritage Law, specifically the guidelines on the recovery of the Ancestral Cultural Heritage and its authenticity.

In addition, the aim is to establish a system for national and international information and communication that will promote Raymikunas. It will provide a link to the Ministry of Foreign Affairs and Human Mobility for the international dissemination of the project.

The project’s financial resource base comes mainly from the Prefecture of Azuay, which was earmarked for this initiative in the 2019 and 2020 Annual Operational Plans (POA). Greater partnerships are being sought through decentralized international cooperation opportunities, as well as with other bodies such as the Ministry of Culture, the Ministry of Tourism, and the Department of Communication. It has also sought support from the region’s mayors, as well as international dissemination, in order to attract national and international tourists.

To ensure the continuity and sustainability of the project, a state policy is being considered so it can be implemented by future administrations.

Azuay was a candidate for the fourth UCLG Mexico City – Culture 21 International Award (November 2019 – May 2020). The jury for the award drew up its final report in June of 2020, and requested that the UCLG Committee on Culture promote this project as one of the good practices implemented under Agenda 21 for culture.

This article was written by Juan Pablo Ordoñez Vicuña, Coordinator of Culture and Tourism, Cuenca, Ecuador. 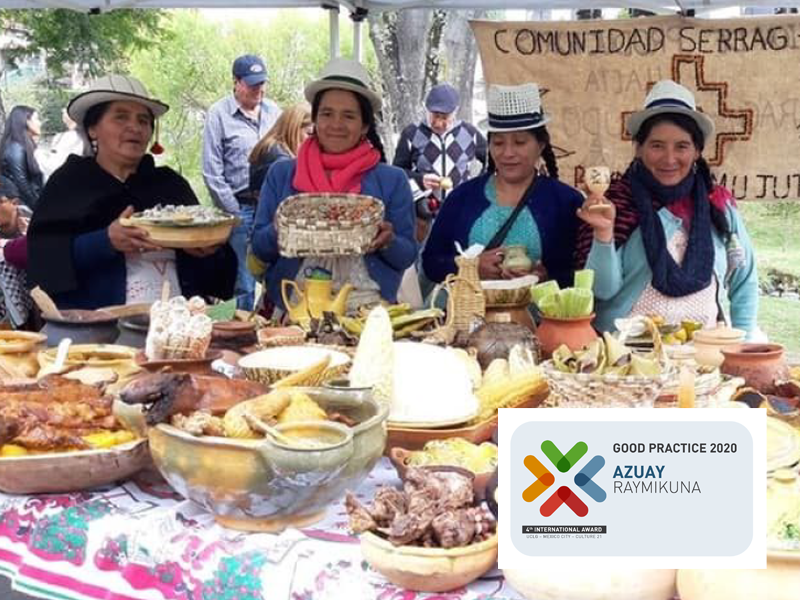