Situated in the heart of Europe, Angers boasts a prestigious history. As the historic capital of the Anjou territory, Angers has been shaped over two millennia from the end of the Roman era up until the conglomeration of Europe in the twenty-first century. As the sixteenth largest city in France, it sits at the heart of the Loire Valley tourism region along the Loire castles route, a UNESCO World Heritage Site. The city is home to 150,000 inhabitants and acts as the centre of a grouping of 33 towns, bringing together some 283,000 people.

With two universities and seven large international schools, Angers is a city that attracts youth. Forty-eight percent (48%) of the population is under the age of 30, and every year 33,000 students choose to attend university here.

Recognised for its engagement and achievements in sustainable development, Angers serves as an example for other cities. It has received many awards in this area.

Angers is an enterprising territory that welcomes many businesses. It has a globally competitive hub in the plant sector called, Vegepolys. The electronics industry is another sector of excellence in Angers, housing a high-tech campus project.

It is thus a decidedly international European city. It hosts a large European film festival, developed over years of creating close ties with other European cities like Haarlem, Osnabrück, Pisa, Wigan, and Toruń, as well as international cities such as Bamako, Tantai, and Austin.

In order to revisit the cultural policy surrounding sustainable development and societal challenges, after 2008 the City of Angers implemented Agenda 21 for culture in the region.

The cultural policy in the City of Angers is based on the idea that culture enriches and renews the identity and attractiveness of the territory. This is done through its history, overall potential, collective memory, and development. Underlying all of this is the belief that artistic and cultural activities contribute to the promotion of human development, quality of life, and social bonds throughout the city.

As a result, the City has opened itself to helping artists in many ways. They fund active local associations and a number of creative and cultural diffusion spaces. These include: Le Quai theatre, the National Contemporary Dance Centre, the Angers-Nantes Opera company, the National NTA (New Angers Theatre) Drama Centre, the Chabada concert venue, the Angers Regional Conservatory, the Gallery of Sound, and the School of Fine Art, among others.

The area accounts for five art museums, the Château d’Angers castle, a wealth of rich history, archaeology, a natural history museum, 17 cinemas, 12 libraries and an art library, as well as nearly 26 venues and spaces devoted to live entertainment like theatre, opera, and dance.

- Preserve, enrich, and value the cultural wealth and heritage of a region, enabling their adoption and diffusion by current and future generations.

- Contribute to the accessibility, development, and attractiveness of the region.

- Fostering education and transmission of knowledge.

- Encouraging discovery and cultural expression for everyone.

- Facilitating participatory initiatives and the co-creation of cultural policies.

- Outlining and creating connections between cultural approaches to projects and cultural policies.

For Angers, Agenda 21 for culture forms the cornerstone of its renewal of cultural policies, and also creates a large space for dialogue between various regional actors.

4. Agenda 21 for culture and Cultural Policies

In order to revisit cultural policy surrounding sustainable development and societal challenges, in 2008 the City of Angers implemented Agenda 21 for culture in the region.

Given the project’s strong participative element, the inhabitants of the Anjou region can then become party to constructing, implementing, and monitoring Agenda 21 for culture through plenary meetings and work groups. The project is centred on a commitment charter that defines local challenges adapted for this particular context; it accepts commitments for appropriate response.

The charter conveys the aspirations of social collectives and partnerships, questioning cultural policies with regard to notable changes in society. Furthermore, it highlights a willingness to make culture a core issue in recognising social development as a powerful environmental and economic force.

For Angers, Agenda 21 for culture forms the cornerstone of its renewal of cultural policies, and also creates a large space for dialogue between various regional actors. It includes sharing good practices, insight, and local community projects.

The many projects being implemented throughout the region are for collective heritage, set within the framework of the collectively adopted commitment charter.

Cultural actors have established ways of reducing the environmental impact of their activities or even making their practices more open to different audiences. Transversal projects initiated by groups are built upon the relationship between inhabitants and their natural environment, or even the perceived representation of a region and a poetic image of the city.

A specific 48 actions plan was also adopted in June 2013 by the City of Angers. By bringing together 13 different branches, it is a transversal inclusion of sustainable cultural development issues. It is a testament to the political will to recognise and guarantee a place for artistic creation and cultural expression; it creates cultural effervescence, and it enables democratic debate of ideas, which are essential for regional development.

A specific 48 actions plan was also adopted in June 2013 by the City of Angers.

The ongoing development of cultural policy in Angers and the incorporation of Agenda 21 for culture makes it possible to advance the cultural practices and uses of the region. It enables co-construction between actors, diversity among cultural forms, recognition of individuals' cultural expression, public and civic participation, and much more. This collective progress gradually permeates into the larger territory and comprehensively affects the recognition of cultures as shared wealth, strengtheners of social bonds, and powerful forces in local development.

Many projects were seen to have a significant impact. They stood out in the reoccupation of public space; the organisation of meetings and exchanges between cultural actors; the promotion of citizens' participation; and the reflection upon the relationship between humans and nature.

- The commitment charter for the Angers region on Agenda 21 for culture.

- An explanatory summary sheet on Agenda 21 for culture.

This information sheet has been put together by Isabelle ROTONDARO, Director of Cultural Action, City of Angers. 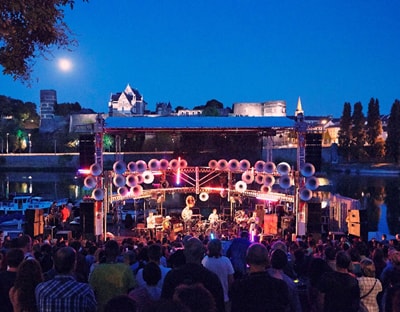