Vaudreuil-Dorion: Mosaic parade, a party as a tool for transforming the community

In less than 20 years, a small city in Canada's Vaudreuil-Dorian province of Quebec, has seen a significant transformation in its demographic; the number of citizens has risen from 17,000 to 37,000. The new citizens have had quite an impact on the statistics, transforming it from an ageing population to a community that is now predominantly made up of young families. 10 years ago, most of its citizens were French-speaking, but a large influx of immigrants has meant that more than 40% of the population do not speak French at home. In light of these facts, how can we avoid creating a divide between French-speaking and English-speaking citizens? How can we provide a strong, united community?

In 2010, the city created the 'Je Suis' program, which is an extensive cultural mediation program that provides more than 600 participatory workshops each year and involves 20,000 participants.

Since 2011, the Mosaic Parade has been held within the framework of this program. It is a large procession that has been created and delivered by almost 1,000 Vaudreuil-Dorion citizens from all nationalities, which allows them to express their pride and sense of belonging. The Mosaic Parade is one of the city's landmark features. Every year, on Quebec's symbolic Saint-Jean-Baptiste Day, 23rd June, (Quebec's national holiday) it mobilises and assembles 20,000 people.

It is a participatory parade that the citizens have created themselves: they decide on the content, the different symbolic messages they want to express, they make their own parade costumes and props during creative community activities. In order to do this, they have created groups (cultural communities, social, sports or economic organisations, schools, families, interest groups, etc.) and have each accepted the challenge of putting together a section of the parade, which we will refer to here as a 'display'. They will be supported by a group of 10 artists who form a artistic leadership and support team for citizens. The citizens also form a creative committee for each of the groups in order to come up with the concept for their 'display'. This way, everyone is able to take part in the decision-making process. Creation becomes a democratic exercise in itself.

The mosaic parade is a participatory parade created by the citizens: they decide on the content and symbolic messages that they want to express and make their own costumes and parade props during community activities.

For 5 months, trained groups of citizens (26 in 2014) work together on the design and creation of costumes, make up, decoration, musical and choreographical choices, with the support of a professional artist. In total, more than 100 workshops are organized during this period. The aim of these creative citizen groups is to enable 'improbable encounters' to take place between people and groups that would not normally meet without these activities (ex: older people and children, members of a cultural community of Quebec origin, etc.), which helps people have mutual understanding of each other and creates new places for exchange and meeting.

The Mosaic Parade is an artistic action with a unique citizen approach, where social cohesion is the ultimate objective. This action is, in fact, a great community-building exercise for citizens, run by citizens, regardless of their origins. Even though this parade does not label itself as 'multicultural', it endeavours to make everyone feel welcome. In the past, we have noticed that many citizens of Quebec origin have felt excluded from our notion of multiculturalism.

2.1. It is an activity that unites, involves and gives people responsibilities .

For the city of Vaudreuil-Dorion, the Mosaic Parade is a tool that allows citizens to meet up and lets them reinvent their citizenship by personally investing in the realisation of a shared project. Through the creation process, citizens live within their community and explore different facets of democracy and their similarities and differences with others. In this respect, artist serve as a go-between to make sure that everybody pitches in.

Let us imagine that, within the same creative citizen group (committee of +/- 10 people), there is one artist, four citizens of Mexican origin and four from Quebec who combine their ideas to create a 'display'. As a result, 70 citizens assemble and transform themselves into Mariachis (Mexican expression) wearing snowflakes and singing "My country is not a country, it's winter" (a song by Gilles Vigneault, which has become emblematic in Quebec). These groups of citizens therefore enable everyone to gather and reveal their expressions of creativity. Another example: a group of children in their fourth year of primary school from 19 culturally different communities came together, with their parents and volunteers from the Maison Félix-Leclerc museum. The result: "My shoes have travelled far" translated into 19 languages and a duo of flags from 19 countries twinned with the Quebec flag. This activity has provided a unique gathering for 24 families from Quebec and elsewhere, allowing them to form firm friendships.

Our citizen approach also looks for individual commitment within each group. Naturally, some people take responsibility for certain aspects of creation, such as choreography, music or costumes etc. However, the group collectively approves all decisions. As such, citizens feel that they are part of the action. Coaching professionals from the city's Arts and Culture Department ensures that everybody's voice will be heard and respected.

Citizens are the main beneficiaries of the project, as well as those who are directly involved and take part in this demonstration of citizenship and creativity.

3. Focusing on the approach rather than the result

Vaudreuil-Dorion's elected representatives have a vision: a united community is respectful and embraces the differences of the people within it.

By setting up the Mosaic Parade, the city wanted to provide its citizens with a chance to gather together within the context of creation and celebration. What better way to express one's pride and sense of belonging to a city than participating in a positive event? Normally, cultural events focus on the expected outcomes (ex: outdoor show from a well-known artist, large exhibition on the city's history, etc). However, Vaudreuil-Dorion has been innovative by letting its population focus on the creation stage and their active participation in creating the parade, which gives them a chance to experience a unique opportunity with other members from our community. The creative participatory process allows people to meet each other, to have exchanges, but more importantly, it lets them create common values and expressions that bring people together and redefine the community. The group's pride in their work is also an important part of the collective creation process. The outstanding outcome is something of a reward for its participants.

In so doing, we ensure that the participants' only obligation is that they meet together and share. Together, they are aware that they are experiencing something special by discovering new things about each other and sharing their respective passions. The Parade is exceptional in that it is the citizens themselves who put pressure on its outcome. Moreover, this approach persuades participants to develop trust with each other and their different abilities. The three resulting elements of this process are:

Above all, the Mosaic Parade's main impact is on the citizens.

For the citizens who participate in the parade, the creation of strong links with other citizens is what characterises this experience. Citizens make the most out of this experience by getting to know each other better and by creating unforgettable memories during parade rehearsals, which they can associate with their new knowledge. It is not uncommon for solid friendships to be born of these gatherings. For example, a Quebec family formed a connection with a Pakistani family and they now run a grocery store together: the men and women formed a real friendship.

For those who gather together for the duration of the process, this event is a chance to come together and celebrate their community. At the end of the parade, everyone is invited to meet in the 'Parc de la Paix', where the parade's finale takes the form of a great celebratory jam (an improvised musical show) where all participants dance to the rhythm of the tam-tams and show off their magnificent costumes. This frenzied finale ends in a large firework display with an audience of around 20,000 people.

These artists become real facilitators for citizen expression and vectors for gathering, exchange and social cohesion.

Citizens are the main beneficiaries of the project, as well as those who are directly involved and take part in this demonstration of citizenship and creativity. Thanks to various workshops, participants benefit from several positive impacts: they actually reach out to each other, step out of their 'comfort zones', either thanks to an artist or another citizen. They combine their own ideas with those of others to design, produce and deliver an artistic creation. They express their pride in front of two thirds of their community's population (20,000) by celebrating and showcasing the beauty around them.

This parade also increases levels of citizen creativity and leads them to think differently about their city. Parade 'displays' often carry a message and the citizens involved often choose to further their involvement within their community by volunteering with community organisations that they met while preparing for the parade. Some participants even assign themselves with cultural activities throughout the year.

In the short term, friendships are made and compulsory social tolerance leads to openness and acceptance of each other's differences. In the long term, the community re-builds itself and lays the foundation for a harmonious community life. The parade is basically a big party where everyone is both a host and a guest.

For artists, the Mosaic Parade gives them an important role within society because they become facilitators of citizen expression and vectors for gatherings, exchanges and social cohesion. Artist involvement in the parade also ensures them with greater inclusion and professional recognition within the community. Several participating artists have also seen an increase in sales of their art work or further employment for related initiatives within the area. Businesses and organisations have also set aside budgets to involve certain artists in order to prolong their cultural mediation experience. The parade gives artists better recognition within the area by making them facilitators of change.

The Mosaic Parade is an artistic initiative with a unique citizen approach where social cohesion is the ultimate objective. this action is a community-building exercise for citizens, run by citizens, regardless of their origins.

6. Building the future together

The Mosaic Parade gives citizens an opportunity to meet each other, discover new places for exchange, express themselves collectively and with pride, and is a trigger for a host of future actions. The Mosaic Parade is a milestone event that provides a base for the community, both during the creativity process and the actual day of the parade. As it is clearly written in capital letters, as part of a sustainable development approach to its socially structured character, the Mosaic Parade provides the area with an amazing opportunity to reinvent itself.

THE MOSAIC PARADE FORMS LINKS BETWEEN MEMBERS OF THE COMMUNITY.

This information sheet was put together by Michel Vallée, Head of Vaudreuil-Dorion's Arts and Culture Department. 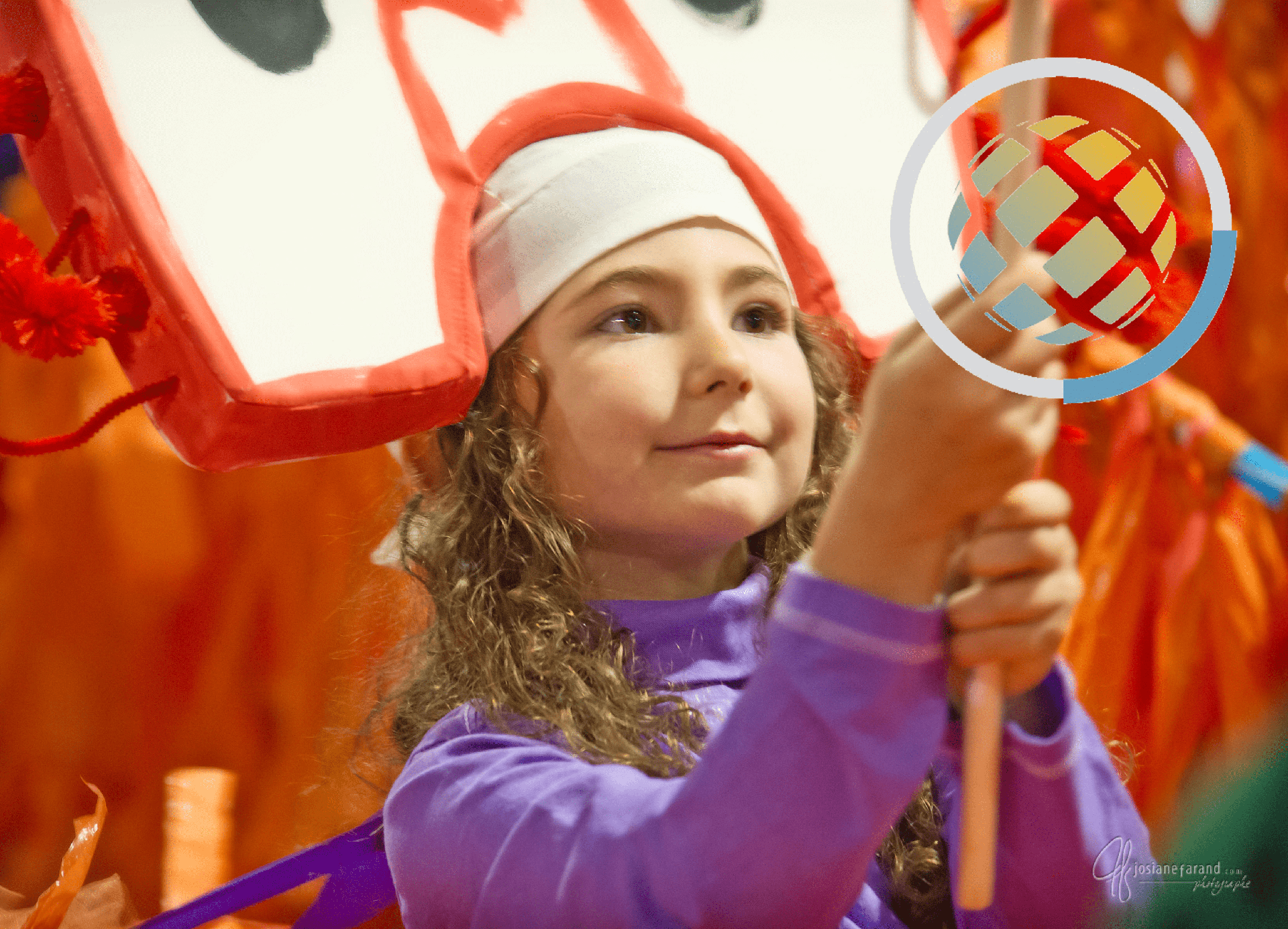