Jatiwangi is a sub-district of the Majalengka Regency, located in the province of West Java. Jatiwangi has been known as a producer of roof tile and is the largest one in Indonesia and even Southeast Asia. However, shortly after the 1998 monetary crisis that hit Asia, the roof tile industry declined and barely 150 traditional factories have survived to this day. In the midst of the economic downturn, the Indonesian Government signed the declaration that endorsed the Blueprint of the ASEAN Economic Community. Jatiwangi was included in the West Java industrial estate development scheme, and infrastructure projects were built. Since then, manufacturing factories began to bloom and Jatiwangi became a modern manufacturing industry area, almost entirely foreign-owned. The cultural landscape of rural areas continues to move into urban areas, and economic development is no longer owned by local residents but belongs to systems that have a large capital.

The aim of the West Java regional government cultural policies is to increase regional economic development based on the local potential; preserve local cultural assets, such as terracotta materials produced by traditional industries; make arts and culture regional assets to support tourism development within the frame of local wisdom; and improve the quality of human resources. Furthermore, new infrastructures are being built, from tolls to international airports. The Majalengka regional government has also made regulations to protect traditional terracotta industries and has become the main consumer of these products.

The project ains to produce Terracotta products in Jatiwangi, such as architectural elements, tableware, or souvenirs.

Their mission is in line with the Terracotta City program, a network proposed by the Jatiwangi Art Factory community that connects artists, architects, designers, and ceramicists, offering a diversification of terracotta products beside roof tile that meet market demand. The idea was to renew and diversify the production of clay, from tableware to architectural elements, to play a role in the development and increase the economy of the citizens again. The West Java Government welcomed and ordered the Majalengka government to make it happen. Thus, Jatiwangi Art Factory organized the Ceramic Biennale and invited artists, designers, architects, and ceramicists to create new designs for the Majalengka government to build the city, a process that will continue until 2023. The creativity that emerges in the process of diversification of Terracotta City products, is a cultural, social and economic asset for the West Java government that needs to be preserved and supported.

The project aims to produce various terracotta products in Jatiwangi, such as architectural elements, tableware, or souvenirs, therefrom hoping to regain its economic potential through its cultural material and enabling the Majalengka regional government to use them for its development projects.

This project began in 2019 through the ceramic’s biennale in Jatiwangi, which invited artists, architects, designers, and ceramicists to make new products with the Jatiwangi community.
These products are still being developed through series of:

The Majalengka Regional Government has established Jatiwangi in the spatial and regional design as a terracotta area of conservation and a product development laboratory. By 2020 the Terracotta project will be signed as an official regional policy. Also, the Majalengka government building is envisioned as a media display for these local products for tourists, and the use of terracotta primary materials is encouraged in the development of the region. However, the process of creation and production cannot be fast, since Jatiwangi Art Factory is the only party that has the role of bringing in artists and creators. Consequently, the Majalengka government should have materially supported the creation laboratory of the Jatiwangi Art Factory.

The government institution directly supports the creative economy ecosystem. Landmark projects in Majakengka were built with Terracotta elements. The next discourse has even entered into how to maintain the local industry to become a touristic heritage.

The Majalengka Regent has issued a warrant for all local government institutions to use local terracotta products. The government institution directly supports the creative economy ecosystem. Also, landmark projects in Majalengka were built with terracotta elements. Finally, the next discourse has even entered into how to maintain the local industry to become a touristic heritage.

Traditional tile factories can survive as cultural sites where local knowledge of tile processing can be preserved, becoming Majalengka cultural heritage and encouraging economic development from the production and tourism sectors. Moreover, products produced in studios can contribute to a new craftsmanship culture, creating a new culture of art and culture in Majalengka. These potentials not only provide a new social and economic landscape but also encourage the development of human resource capabilities.

The decision of the regional government is certainly concrete in assisting the development of a creative industry based on local culture, which is in line with the mission of West Java’s cultural policy. Cultivation of land which is no longer merely used for tile production can revive Jatiwangi products, improve human resource skills, and support ecological discourse. The new manufacturing industry in Jatiwangi is an economic source of the local population, so that ownership and use of land for the new industry can be negotiated by residents.

In 2019, the first time Terracota City was planned, the Jatiwangi Art Factory invited various elements of government. The government institution is related to regional planning, which handles trade affairs, and environmental matters. Subsequently, an agreement occurred.

Jatiwangi Art Factory is working in studios doing research and creating new designs with invited artists. The regional government then drafted regulations related to the designation of Jatiwangi as a terracotta city area, which involved two things: land mining rules that pay attention to ecological discourse and the determination of the use of terracotta elements in government-owned buildings in Majalengka.

In 2020, the Jatiwangi Art Factory is conducting an experiment in architectural elements with ceramic artists from the UK, whereas the Majalengka government is carrying out a terracotta fence construction project for government buildings. However, the third party that gets the task of the government building project is not aware of the situation, the condition of Jatiwangi and the idea of Terracotta City, which is a problem, since they assume that the products are ready to use. While that happened, the studios were carrying out continuous trials.

In 2020, the Jatiwangi factory is conducting an experiment in architectural elements with ceramic artists from the UK, whereas the Majalengka government is carrying out a Terracotta fence construction project for government buildings.

Majalengka government has poured the Jatiwangi as a Terracotta City into a regional spatial plan for the next twenty years. The Majalengka Regent has also commissioned the use of terracotta material as the main element of city development. Apart from this governmental support, the Jatiwangi Art Factory, local government, and roof tile factory studios currently continue to coordinate with each other to make the product ready in the field, making this cooperation a key to the project’s success.

Providing a market for terracotta products developed in Jatiwangi was the first thing to do. We decided to re-brand various government offices in Majalengka Regency using elements of terracotta architecture in accordance with the existing products in Jatiwangi. In addition, after the signing of the Terracotta City plate by the Governor of West Java, we continued to coordinate with the Government of the Province of West Java to harmonize the development plans of the province to allow the absorption of these terracotta products.

Secondly, we intervened in the regulation, especially the one related to the detailed spatial plan of Jatiwangi, which we will try to arrange together with the residents and the Jatiwangi Art Factory this year. In this detailed plan (scale 1: 5000) we can determine various designs of public facilities such as sidewalks, schools, government offices, public furniture to use terracotta products from Jatiwangi. One thing that is no less important is the determination of the zones of raw materials followed by regulations that allow the utilization of land resources so as not to get trap in the exploitation paradigm.

Jatiwangi was a candidate for the fourth “UCLG Mexico City – Culture 21 International Award” (November 2019 – May 2020). The jury for the award drew up its final report in June of 2020, and requested that the Committee on Culture promote this project as one of the good practices to be implemented through Agenda 21 for culture. 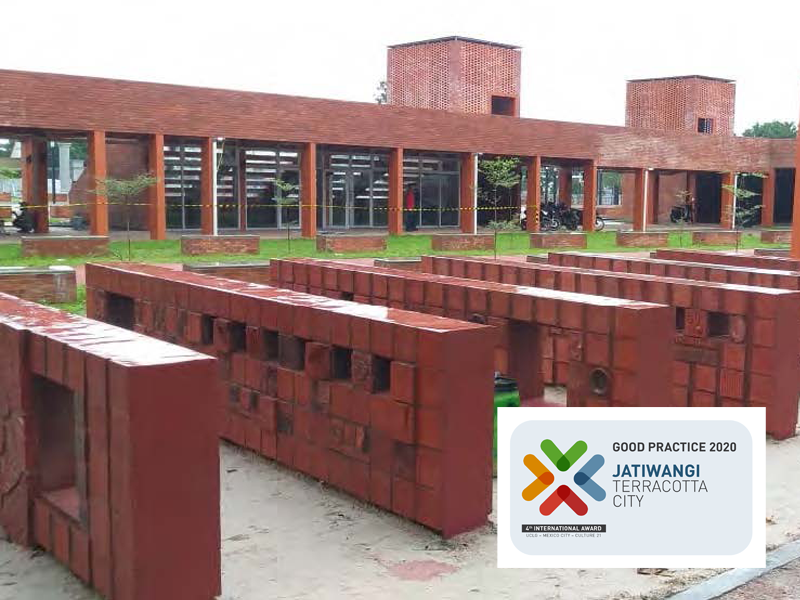