Strategy for the intration of arts and culture into acadian society

The Acadians are one of the founding peoples of Canada, with a tumultuous history marked by massive deportation from 1755 to 1763. They were dispersed throughout New England, Louisiana, France, Quebec, the Caribbean, and around the world. Eventually, some Acadians gradually returned to part of their territory in Eastern Canada, and in the 19th century established Francophone development institutions and agencies.

Today, New Brunswick is made up of 53 Acadian municipalities, with about 250,000 Francophones who make up 33% of the population in Canada's only officially bilingual province. The province has two official language communities; the English-speaking community is the majority, while the French-speaking one is the minority. This reality presents significant challenges to the Acadian community, which developed in an environment where contact with cultural expressions is predominantly English. This makes it increasingly difficult for the transmission of language, as well as the adoption of French cultural expressions by youth. In addition to this is the issue of migration of part of the rural Francophone population in the north, to the predominantly Anglophone urban areas in the south.

The Comprehensive Strategy for the Integration of Arts and Culture into Acadian Society in New Brunswick developed out of an urgent need for inclusive local governance, as well as cultural and linguistic reinforcement.

This strategy emerged out of the 2004 National Convention of the Acadian Society of New Brunswick. There were 600 delegates from all spheres of society who unanimously recognised the fundamental role of arts, culture, and heritage in sustainable development. They adopted the following recommendation: "Given the fact that arts and culture comprise a fundamental vehicle for sustainable development in Acadia, it is recommended that a General Assembly on arts and culture be held in order to develop a vision and joint strategies which consider issues raised during the Convention.”

In 2004, due to the achievements and influence of artists, the Association acadienne des artistes professionnelles du Nouveau-Brunswick (AAAPNB) [Acadian Association of Professional Artists of New Brunswick] was mandated by civil society to hold the General Assembly on arts and culture. To achieve this, the AAAPNB assembled all sectors of society to reflect upon the contribution made by arts and culture to the development of Acadia. The Comprehensive Strategy was subsequently born out of a need to sustain and develop this community, as well as for cultural democratisation.

THE ARTISTIC COMMUNITY AIMS TO LEND A PERSPECTIVE THAT SUPPORTS INITIATIVES LINKED TO ALL SPHERES OF SOCIETY.

The Comprehensive Strategy has primarily influenced the development and implementation of municipal and cultural policies. This has occurred through the use of a common vocabulary and the inclusion of concepts favouring the integration of arts and culture into society, such as the territory's cultural management or cultural mediation, among others.

Generally, the Comprehensive Strategy is an action plan that allows all sectors of society to achieve common strategic objectives. There are seven sectoral strategies that articulate a vision, main issues, the foreseeable short-, medium-, and long-term results, the means and actions to be emphasised, as well as organisations and key stakeholders involved implementing such strategies.

Despite having started in 2004, the General Assembly on arts and culture in the Acadian community of New Brunswick fully adheres to the principles, commitments, and recommendations of Agenda 21 for culture. The project specifically addressed the following issues from "Culture 21: Actions”:

This approach aims to make culture a driving force for sustainable development in Acadia in New Brunswick, thus maintaining the vision of A21C and C21A.

The project strives to instill arts, culture, and heritage as the heart of sustainable development in Acadia in New Brunswick. It does so to fortify citizens' cultural identities, to commit local and regional governments to a genuine responsibility for development, to improve the socioeconomic status of professional artists, and to emphasise the value of cultural diversity. The project will mobilise the primary movers of society in an exercise of cultural ownership and democratisation. It will also engage political authorities in the implementation of structuring models and strategies which embody this vision.

Launched in 2004 alongside the General Assembly on arts and culture in the Acadian community of New Brunswick, this initiative brings together all sectors of civil society. This included socioeconomics, education, higher education, the economy, municipalities, youth, women, health and well-being, media, arts and culture, museums, and heritage. It also involved different levels of government (federal, provincial, and municipal), which all worked together over five years to develop this strategy. This was an immense collective and participative effort that involved over a thousand people.

After only few years of work, 54 proposals were tabled in 2007 at the meeting of the General Assembly, where these were unanimously adopted by the thousand participants. Seven sectoral strategies were identified and adopted:

Since 2009, the sectoral strategies of this "national" cultural policy have guided French-speaking municipalities, civil society organisations, and government partners in their actions. Coordinated by the AAAPNB, this project has mobilised nearly fifty partner organisations and their members to ensure the sustainable development of the Acadian community. These stakeholders have been engaged in genuinely integrating arts, culture, and heritage into the community, while also making it possible to carry out several hundred initiatives.

THE COMPREHENSIVE STRATEGY DEVELOPED OUT OF AN URGENT NEED FOR INCLUSIVE LOCAL GOVERNANCE, AS WELL AS CULTURAL AND LINGUISTIC REINFORCEMENT.

After launching the Comprehensive Strategy in 2009, the AAAPNB was charged with its implementation. Since then it has been working to support partners in carrying out actions, to ensure the organisation and coordination of round table discussions, as well as in developing promotion, accountability, and policy monitoring for the strategy. Thirty out of fifty-two municipalities, in addition to six provincial ministries, one federal ministry, and some forty other organisations with over a thousand citizens were actively involved in implementing this strategy. Specifically, it enabled:

Municipalities face significant challenges in attracting and retaining the population. They are constantly looking for concrete solutions to increase citizen participation and the population's well-being. Implementing the Comprehensive Strategy has had a genuine impact on their ability to respond in an innovative way to issues affecting quality of life, cultural tourism, heritage conservation, and the cultural management of spaces and regions. Following its implementation, a dozen Acadian municipalities had established cultural policies, and others were in the process of developing theirs.

Today, creative, production, broadcast, and conservation organisations, as well as cultural societies and artists, are more recognised by the population. Furthermore, as they are often the chief architects in cultural and artistic development in Acadian municipalities throughout New Brunswick, their role as cultural transmitters is more highly valued. Thanks to the many professional development initiatives created out of the strategy, there has been an undeniable improvement in the dissemination of knowledge and a greater sharing of expertise.

Enriched by the General Assembly, Acadia has benefitted from a better understanding of the role of arts and culture as pillars of its full development. There was also an increased awareness of the impact that arts, culture, and heritage have upon identity building for youth, cultural management in territories, and in safeguarding French-language community environments. There is also a clear, improved cohesion and better dialogue among organisations, in addition to decompartmentalisation across all sectors of civil society.

The concept of cultural development, the creation of ongoing multisectoral consultation panels, and citizens' participation across every sector of society, have all had crosscutting impacts in the economic, social, and environmental spheres. The Comprehensive Strategy has had a broad, horizontal impact upon identity building, linguistic reinforcement, improving the status of human cultural resources, and the development of Acadian communities.

In light of the current political, social, and cultural environment, and considering the many actions taken and their impact on new public policies, stakeholders are presently evaluating the results obtained from implementation frameworks. These were used for each of the sectoral strategies in which short-, medium- and long-term outcomes were identified.

The Comprehensive Strategy for the Integration of Arts and Culture was adopted in 2009 for a 10 year period. Updating it will aid in developing a new roadmap to ensure its continued implementation until at least 2023. Training and professional development have been put in place, and French-speaking municipalities have been charged with undertaking this initiative.

THIS APPROACH AIMS TO MAKE CULTURE A DRIVING FORCE FOR SUSTAINABLE DEVELOPMENT IN ACADIA IN NEW BRUNSWICK.

New Brunswick was a candidate for the second "UCLG Mexico City – Culture 21 International Award” (January - May of 2016). The jury for the award drew up its final report in June of 2016, and requested that the Committee on Culture promote this project as one of the good practices to be implemented through Agenda 21 for culture. 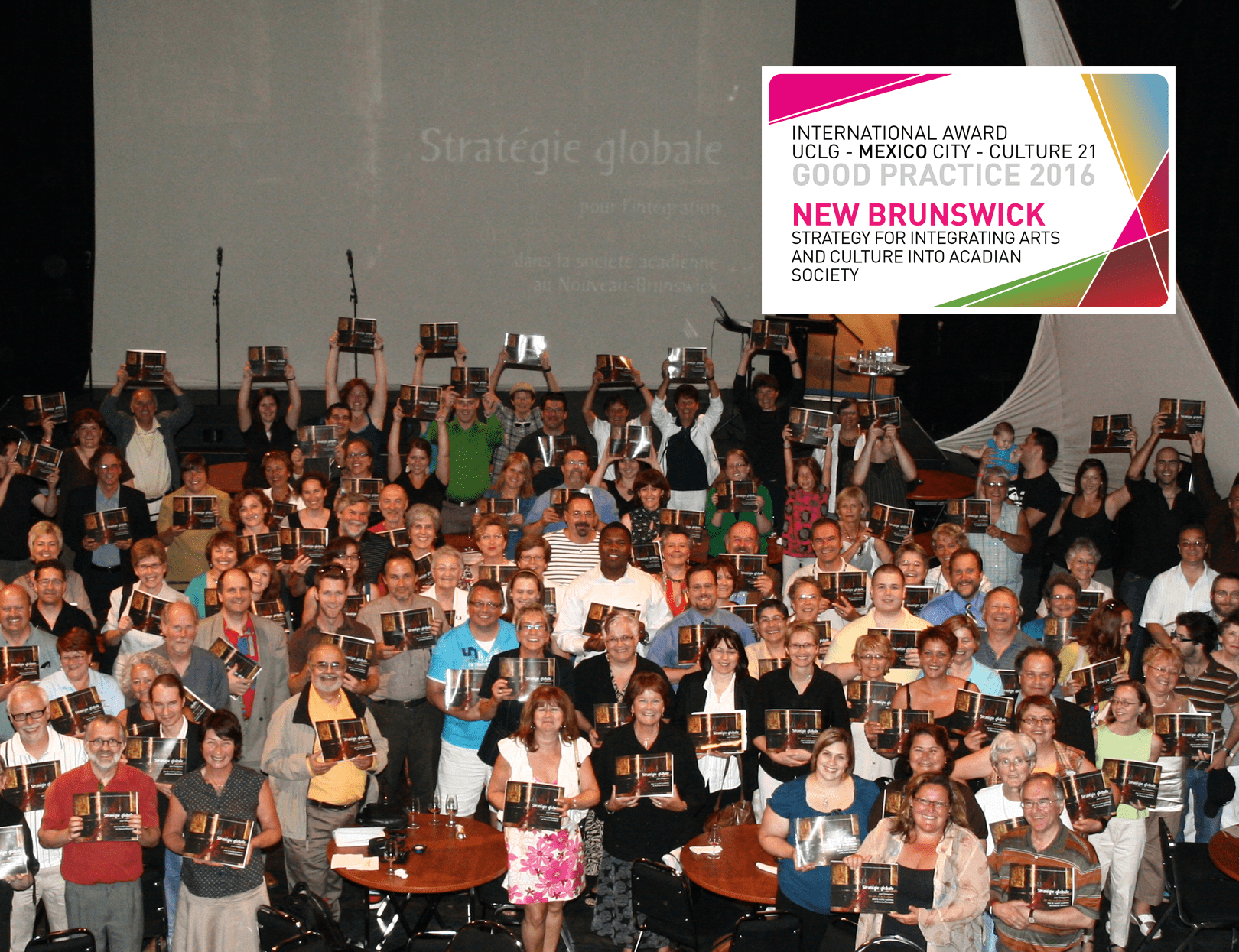