Municipal grant fund for culture and the arts – FOCUART (Phase 1)

La Paz - Chuquiago, is a plural and diverse city. Social groups, generational groups, residents from other municipalities or Bolivian departments, as well as LGBTQ organizations, feminists, environmentalists, rural organizations, people with disabilities, and a diverse number of urban cultures all coexist here. It is quite traditional as a result of constant migration and interaction between the countryside and the city.

As a result, art and culture can be the main bridges to intercultural dialogue and social innovation.

The municipality of La Paz has included culture as the fourth pillar of sustainable development. For this reason, the policy is part of the Autonomous Municipal Law on Strengthening, Safeguarding, Developing, and Promoting Cultures and the Arts. Chapter IV establishes FOCUART, as well as its operational strategy with the co-management approach under the Intercultural Citizen Council for Arts and Culture Planning (CONCIPCULTA), the Fund’s resources, and its 6 lines of action for improvement: Promotion of the arts and new technologies; Development of living community culture; Strengthening cultural spaces and cultural heritage; Promotion of research and training; Developing networks, mobility, cultural outreach, and local audiovisual development.

The project arose out of a joint initiative between civil society organisations and the autonomous municipal government of La Paz. It addresses the lack of a public policy focused on transparent, democratic cultural promotion.

The project arose out of a joint initiative between civil society organizations and the Autonomous Municipal Government of La Paz. It addressed the lack of a public policy that is focused on transparent, democratic cultural promotion, intercultural dialogue, and regional decentralization that is neither hierarchical nor promotes a static view of culture. The initiative is a response to Agenda 21 for culture, which focuses on: the promotion, maintenance, and expansion of cultural goods and services, as well as universal access to them; expanding the creative capacity of citizens; the richness of linguistic diversity; demand for art; the search for new forms of expression; experimentation with new languages; and the reframing and interaction of traditions.

This policy is directly linked to reducing inequality, both in and between countries (SDG 10). It works to contribute to empowerment, promote inclusion, and encourage the work of creative professionals built on intercultural dialogue.

In 2020 alone, plural and democratic cultural participation increased by at least 100%. This means more intercultural dialogue, which improved quality of life for all residents.

Local artists, cultural groups, and civil society organizations from decentralized areas throughout the municipality, as well as other groups that aim to carry out initiatives and social transformation
through arts and culture proposals.

The goal was to increase plural and democratic cultural participation by at least 100% in 2020. This means more intercultural dialogue, which improves quality of life for all residents.

A progressive impact assessment system is in place, and it has 4 stages:

This policy is connected to SDG 10, which is focused on reducing inequality both in and between countries. This is clear from the actions outlined for this goal in Culture 21 Actions, based on the principle that cultural participation can contribute to empowerment and promote inclusion.

The first vital element of this project is the co-management, co-responsibility, and citizen participation approaches in the design and implementation of the public policy represented by CONCIPCULTA. This complements the design and release processes of public calls for tender that promote plurality and citizen participation. The second key part of the project is the Grant Fund for democratic, transparent, and sustainable access under the 6 lines of action for improvement. These will promote plurality and citizen interaction, in which the municipality becomes a mediator for achieving real change through a decentralized approach.

The sustainability of this public policy is ensured by the fact that both the spirit of the mechanism and its operating structure are a part of municipal legislation. Additionally, the experiences from the first phase of this project serve as a national framework. Indeed, it is being considered in the design of public policies on culture in other municipalities throughout the country.

La Paz was a candidate for the fourth UCLG Mexico City – Culture 21 International Award (November 2019 – May 2020). The jury for the award drew up its final report in June of 2020, and requested that the UCLG Committee on Culture promote this project as one of the good practices implemented under Agenda 21 for culture. 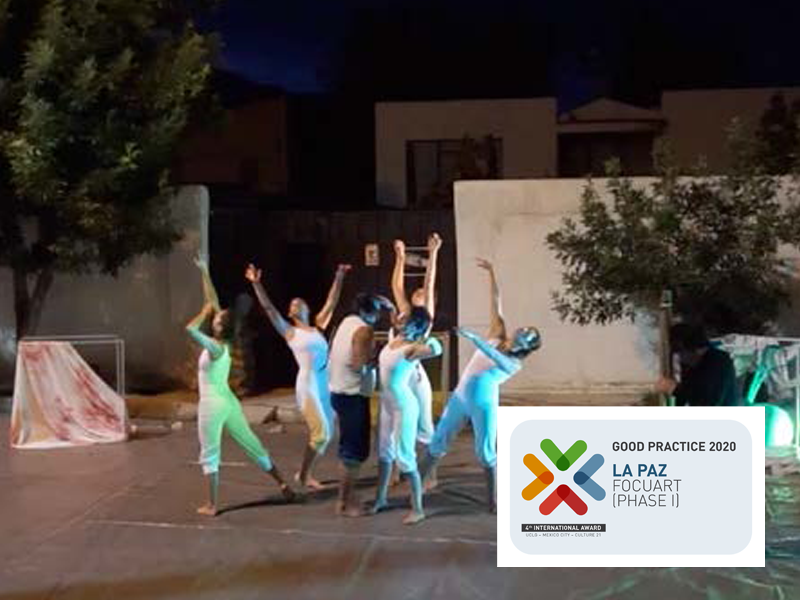