Medellin, Colombia's second city, capital of the department of Antioquia, is located in the Cordillera Central in the Aburrá valley. As an Industrial city, it began providing clothing, fashion, education and health services. It has 2,441,123 inhabitants; with nine municipalities making up the Metropolitan Area (3,500,000 inhabitants). Its territory (38,034 ha) is composed of: an urban area, urban expansion areas and a rural area. Administratively it is composed of 6 zones, 16 communes and 5 townships (rural area). The city, one of the most violent in the world in 1991 (381 violent deaths / 100,000 population), had 38 homicides / 100,000 inhabitants in 2013. The city develops processes involving creators, managers, entrepreneurs, organisations, educational institutions, communities and stakeholders committed to culture as an axis for economic, social, environmental and territorial policies; it also conducts significant advances in the ability to build empowered participatory institutional arrangements from the continuous increase in social investment with interventions that seek the equality of citizens' access to educational opportunities, employment, housing, public space, culture, health and community involvement."

The cultural policy, a public-private social actors initiative, is the result of the awareness of the 90s for the need to build a city project due to the violence to which it was afflicted; it was based on the processes of cultural, territorial and city planning, and the consolidation of political-cultural thinking and citizen participation with groups who decided to enable resilience through art. The trends (Constitution, General Law of Culture, legislative developments, national and departmental plans for culture), set standards for the culture factor of coexistence, strengthening citizenship and the opportunity for decent living. The Municipal Development Plan 2012-2015 appropriated life, equality, education, innovation, knowledge and sustainable development, centred on the respect and empowerment of identity diversity, transparency and good governance as keys for Medellin; its goal is "to contribute, through cultural action and public education, to the appreciation of life and diversity, as an imperative principle for peaceful coexistence"; it recognises the efforts needed to make culture and education factors of social transformation; as well as conservation and respect for life; it recognises artistic expression as the core of culture, public enjoyment, of the right to free expression, and reaffirms culture as a fundamental dimension of the integral development of citizenship and recognition of human diversity and social wealth.

MEDELLÍN PROMOTES THE IMPLEMENTATION OF PARTICIPATORY CULTURAL POLICIES IN THE SERVICE OF CONSOLIDATING CULTURAL CITIZENSHIP, FOR SUSTAINABLE DEVELOPMENT AND IMPROVING THE QUALITY OF LIFE, HUMAN DEVELOPMENT AND THE WELFARE OF ALL ITS PEOPLE.

The cultural political project of Medellín, 2002-2014, is projected in the Plan for Culture 2011-2020. It undertakes culture as a competitive factor without abandoning equality and care for vulnerable populations in order to achieve social justice in a context of guaranteeing rights, valuing diversity, territory, aesthetics and an understanding of the creations, memories and heritage as a foundation of shared meanings. Policy and strategic guidelines:

The Cultural Development Plan 2011-2020 contemplated an agreement with the Instituto de Cultura de Barcelona, to promote dialogue with local, national and international experts; they defined approaches to rights, population and land to build a document that allowed for the definition of policies, the interpretation of the issues and challenges of development with social equity, environmental sustainability, capacity building, citizen empowerment, achieving democratic citizenship and social interaction.

According to the Agenda, the leadership of cultural policy focuses on the Secretariat of Citizen's Culture, from which they work on agreements on the problems of coexistence, security and construction of the public in areas such as public space; information is provided on the processes and public tenders are carried out for the execution of the resources using different strategies, such as the portal www.culturamedellin.gov.co. Medellín is a leader in educational planning, cultural and educational community policies for ethnic diversity, training of entrepreneurs and creative businesses, and the public management of culture has expanded beyond the traditional sectors.

The Municipal Culture System has sectorial, territorial and population councils, there are workshops, networks and organisational processes from which policy building is led. There is the Entrepreneurship Park, the Explora Park, Ruta N and the Medellinnovation project, amongst other initiatives, which project the transformation of the city and where culture is crucial, as well as a cultural educational provision that expands the possibilities for creators, managers and citizens. The mayor maintains relations with the Ministry of Culture and international organisations in order to focus their priorities and progress in obtaining resources from national and international cooperation with the support of the International Cooperation Agency of Medellín -ACI-, where the exchange of good practice is promoted.

General Objective: Promote and consolidate Medellin as a cosmopolitan, equitable, inclusive, deliberative and diverse cultural space that promotes the implementation of participatory cultural policies in the department of consolidation of cultural citizenship, sustainable development and improving the quality of life, human development and welfare of all its inhabitants.

Specific objectives: Consolidate a culture of peace, based on dialogue, democratic participation and peaceful resolution of social conflicts; promote access to cultural goods and services; ensure conditions for the creation, dissemination, circulation of productions and copyright; integrate Medellin into the Latin American region and the world through ICT; promote respect for difference and recognition of creations, demonstrations, traditions and emerging expressions; articulate culture and education; strengthen democratic governance and coordination of actors and institutions in the cultural development of the city.

THE CULTURAL POLICY, A PUBLIC-PRIVATE AND SOCIAL INITIATIVE, IS THE RESULT OF THE AWARENESS GENERATED IN THE 90's FOR THE NEED TO BUILD A CITY PROJECT IN ORDER TO FACE THE VIOLENCE TO WHICH IT WAS AFFLICTED.

The cultural project has now passed through moments of reference such as the Cultural Development Plan of Medellin: Affirmation of life and creativity of 1990, based on the need to recover the path of coexistence and respect among citizens, the role of the cultural sector in the recovery of peace, respect for life and cultural rights, transforming the culture-show into culture for coexistence, affirmation of life and recognition of creativity as a hub of cultural development.

2004-2007. Medellín, a multicultural city. Strengthening of decentralisation, promoting cultural awareness; promoting artistic and literary traditions; networks; training; contests and incentives; memory processes, heritage and identity; Network of museums; multicultural and diversity policies; educational planning and meeting spaces, enjoyment and quality of life. Instigation of zonal plans, the Land Use Plan, the Special Asset Protection Plan, the district plans for culture; establishment of the participatory budget; generation of affirmative action (indigenous and Afro-Colombian communities); Creation of the Chair of Medellín, performance of various city conferences. Agenda 21 for Culture was adopted which prioritizes culture-development relationships and the focus on rights in cultural development, dialogue with Barcelona began and the strengthening of culture as a factor of economic development was incorporated into management by promoting cultural enterprises.

2008-2011. Medellín, supportive and competitive: Development and welfare for the entire population. Driving the process from its guidelines: Arts and Culture; Artistic and cultural training; Medellin, a great scene; Infrastructure and cultural services; Medellín, a city for reading; Planning and strengthening of the cultural sector; Organisation and youth participation; Sexual diversity. Continuity of processes, mainstreaming of culture in the development plan, creation of the Museum of Memory.

2012-2015. Medellin, all for life. Management strategies centered on: A city that respects, values and protects life; art and civic culture for life and coexistence: Ethnic diversity for a vital city; Art and culture for life and citizens; Education and vibrant civic training; Patrimony and Cultural Research, Strengthening the cultural sector; Youth for life, Living city, cultural infrastructure for life; Medellin live-reading; Sexual and gender diversity.

The recognition of cultural politics as an achievement of the citizens endorses the recognition of the cultural subjects as actors in charge of defining the priorities. In reference to the principles of Agenda 21, we can highlight the following:

CULTURAL POLICIES HAVE CONSOLIDATED MEDELLIN AS A CULTURAL SPACE OPEN TO THE WORLD THAT IS EQUITABLE, INCLUSIVE AND DIVERSE.

4.1. Impacts on the government

The investment remains at a high level in terms of the municipal budget, making culture a priority; the cultural impact has made the Secretariat a reference point for advice regarding various cities; its organisational and budgetary structure and management transparency are consolidated; legitimacy and trust of citizens has generated private counterparts; Medellín has won international awards in libraries, architectural design, research, reading and the Altavoz programme, among others.

4.2. Impacts on culture and cultural workers in the city

Strengthened institutions; strengthening of rurality as a cultural territory; provision of comprehensive and articulated stimuli; culture as the core of knowledge management; participation as an exercise of consolidated cultural citizenship; cultural policies of inclusion, territorial equity and recognition of diversity redefine the city; networks, facilities and cultural consolidated public spaces; internationalisation and wide circulation of creators and managers; strengthening cultural industries; valuation of land and memories, development of innovation; formalisation of political literacy; progress in building policies for the Living Culture Community; advances in education-culture relationships.

4.3. Impact on the city / territory and its population

Consolidated democratic cultural citizenship; integration and coexistence of citizens in public cultural spaces; inclusion and equality; decentralisation and support for creative community processes; collaborative learning, training for future generations; greater trust among citizens; compliance with the law; ability to improve relationships; decrease in the use of weapons and organised crime; achieving a shared responsibility in terms of the use of public resources that strengthens citizenship; strengthening local and urban memories; strengthening institutional, sectorial, population, community, and district planning.

Social appropriation of ICTs; further rapprochement to science, technology and innovation from culture; improvement of public education for mobility, coexistence, security; improvements in urban and rural public spaces and their ownership; public policies for population groups: Indigenous, LGBTI, Afro-Colombians, gender, disability, street, prison; incorporation of culture in education; citizen participation in culture; internationalisation of the city; awareness of the behaviour on the road; impact on sport and conflict resolution through cohabitation agreements; participation of culture in processes of productivity and competitiveness; human development through reading and writing and equipment that seeks a solution to the needs of the population, with equality.

The Cultural Development Plan 2011-2020 is anticipated as a tool that organises the desires of the citizens and traces routes that complement district and communal culture plans; a Municipal Culture System comprised of sectors, actors with wide territorial representation and fully operational; A Participatory Budget that ensures the prioritisation of needs; partnerships for the transfer of knowledge and experience; financial sustainability that ensures the implementation of the plans; availability of an institutional structure (Ministry of Citizens Culture and Deputy Mayor for Education, Culture, Participation, Sport and Recreation) that ensures the maintenance of culture in central government decisions; the formation of cultural actors and the community ensures future generations. The city is expected to launch a cultural observatory to promote processes of information, research, monitoring and tracking.

The City of Medellín was nominated in the first edition of the "UCLG International Award - Mexico City - Culture 21" (January-May 2014). The jury for awarding the prize produced its final report in June 2014 and asked the UCLG Committee on Culture to propagate this project as an exemplary practice.

This record was written by María del Rosario Escobar, Secretary of Civic Culture. 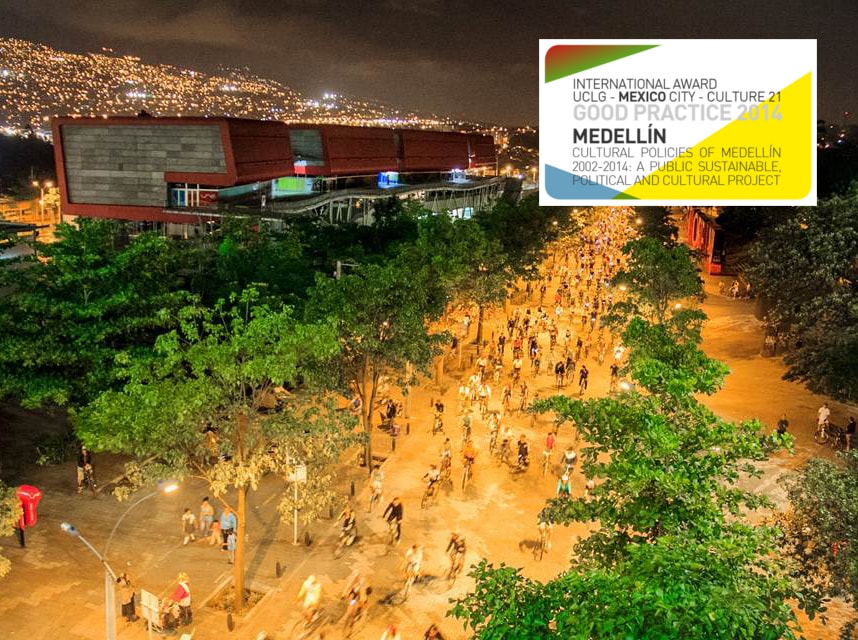