The municipality of Lyon is home to 480,000 inhabitants, but the city centre lies at the confluence of the Rhône and Saône rivers and is France's largest metropolitan area, with more than 1.5 million people. It is an economically dynamic area, with a strong university presence and a nice living environment. Many different migratory populations converge in this area; its population is comprised of 8% foreigners and 12% immigrants. Some areas have five times the number of these populations. It is a city with historical heritage and has been classed as a UNESCO World Heritage Site and an innovative area. It is a city with a densely cultural and diversified landscape. The city has had to face major urban, social and environmental challenges throughout its development. There are still great disparities within the area. With an unemployment rate of almost 10%, the city struggles with distribution inequalities and given the many difficulties, almost 1/5 of residents live in priority areas. For 30 years, the municipality and the metropolis have implemented urban and social cohesion policies to try and resolve the disparities in the area. In addition, for the last 10 years, they have been putting together local sustainable development strategies to deal with the current challenges.

THESE PROGRAMS FOCUSED ON PARTICIPATION, DIVERSIFICATION, DEVELOPMENT OF EMERGING AND IMMIGRANT CULTURES, INTEGRATION THROUGH CULTURAL AND ARTISTIC PRACTICES AND DIGITAL DEVELOPMENT.

'Making Lyon a sustainable city: a cultural cooperative community' is part of the continuation of social development policies in districts made in the 80's, which arose from 'equality marches' initiated by the young people in Lyon's suburbs, many of whom are from immigrant backgrounds.

Lyon's cultural policy, 'For an urban, human and sustainable culture', is linked to a national history of strong intervention from the State. By conserving its heritage, the public's involvement with this work has long been at the heart of this 'cultural democratization' policy. Lyon's cultural landscape has been shaped by its local history of industry and trade: ranging from printing to the dissemination of knowledge, from silk to the Beaux-Arts, from the chemical industry to cinema. It is characterized by:

This heritage must form synergies with numerous operators from emerging channels such as immigrant cultures, private initiatives and civil society, small venues and the fashion industry. There is a pool of knowledge and means made available to the commune, its politics and contemporary issues. The primary areas of improvement are:

Ever since the Agenda 21 for Culture was proposed to the international community to work on culture and sustainable development, Lyon has used it as a source of inspiration. However, after the turn of the century, the city took a slightly different path and aimed at mobilizing policies and cultural operators for priority areas and specific populations. These programs focused on participation, diversification, development of emerging and immigrant cultures, integration through cultural and artistic practices and digital development. Since 2010, the transition has been developed towards a greater consideration of sustainable development issues for the town's cohesion.

Agenda 21 for Culture has been a reference point for carrying out this transition. All the of Agenda 21's principles, expected commitments and recommendations have been studied. The main themes and principles of Agenda 21 have been unreservedly recognized. However, it became complicated to undertake all the points of commitment. Some were more distanced from work done in the community, in terms of its history and experience, like cultural economy, for example. But Lyon is working on the

concept of public service culture and the implementation of economic fashion/cultural activities. Other issues have not surfaced, such as ecological responsibility and linking up urban green art, which is one of the community's strong points. As for participatory democracy, the use of a cultural council seemed outdated, as Lyon's approach is based on a network of district councils.

Other tools have been mobilized:

As a city of 2 million people, Lyon is full of wealth and disparities, knowledge, tensions, festivals, polarization, influence and banishment. As a 'Sustainable City', it must be physically compact, have a restrained energy, eco-friendly and green. As for those who run the city, it must be balanced, united, respectful, enriched with social and intercultural relations and optimistic. The aim of 'Making Lyon a Sustainable City' is to organize a community of stakeholders, who are well informed, respectful of each other, cooperative, reactive and who draw their beliefs, strength and creativity for cultural resources from the area.

THIS HERITAGE MUST FORM SYNERGIES WITH NUMEROUS OPERATORS FROM EMERGING CHANNELS SUCH AS IMMIGRANT CULTURES, PRIVATE INITIATIVES AND CIVIL SOCIETY, SMALL VENUES AND FASHION INDUSTRIES...

Culture is an inseparable collection of these different aspects. The community has experienced a hybridization of culture and creation through the projects it has developed. These are powerful driving forces for developing territories, people and communities. Having been launched in the 80's, the city's operational transition towards sustainability started properly in 2010. From then on, it has been important to discuss what sustainable development could mean for the city: which elements could be pose potential risks for the city and therefore require careful attention; what types of management and responses can transform these risks into wealth and positive development? How can cultural operators take charge and contribute to reducing and resolving these risks?

In 2010, the local experiments already in progress were registered and developed. Valuable tools were mobilized, primarily: Agenda 21 for Culture, Fribourg's declaration, the ISO 26000 standard and the European Council's Intercultural City network. Work in the community formed a local adaptation that used 7 focuses for its cross-sectional commitments:

If these elements are not taken into account, it could have a negative impact on the city’s cohesion. The management of these issues is a factor of harmonious development. Cultural operators are expected to show a responsible commitment, either on behalf of their public service missions for those already supported by the community and the State, or through support from other initiatives.

A culturally cooperative mission at the heart of Lyon's cultural affairs department is livening up the community. Since 2006 it has been co-commissioned and co-funded by local communities and the

State and is run by 4 people. Cultural commissions in each priority district bring stakeholders together to develop the diagnosis of the territory and its main guidelines using the area's cultural project. These commissions can be linked with district councils and are great places for exchanging information, co-building projects and assessment. This organisation is complemented by project group work. The use of thematic commissions for each cross-sectional commitment helps to develop a diagnosis and shared strategies, as well as encouraging the pooling of information at community level. A website has been set up to make information available about the area and its ongoing programs and initiatives. A bi-monthly e-letter will send news updates, projects, publish meeting dates and calls for projects.

On an annual basis, there are days dedicated to community gatherings that have been expanded to include the metropolis and other French cities. These are designed for people to share thoughts and

to validate collective guidelines. It is a chance to form a network and present initiatives to each other. In addition, researchers, philosophers, experts or external stakeholders are invited to participate. This

celebration of city transformation gives rhythm to community life. In 2013, this participatory system

expanded to urban areas with the use of a technical group, who incorporate the principles of cultural cooperation. The Urban Community of Lyon's development council has expressed its opinions on the role of culture and the inclusion of diversity in its urban and social solidarity policies. In 2014, development ideas included the implementation of work platforms on social networks and citizen cultural councils to strengthen inhabitants' role in the process.

THE AIM OF 'MAKING LYON A SUSTAINABLE CITY' IS TO ORGANIZE A COMMUNITY OF STAKEHOLDERS, WHO ARE WELL INFORMED, RESPECTFUL OF EACH OTHER, COOPERATIVE, REACTIVE AND WHO DRAW THEIR BELIEFS, STRENGTH AND CREATIVITY FOR CULTURAL RESOURCES FROM THE AREA.

Every year, there are 150 ongoing cultural and artistic projects. These projects help realize the objectives defined within the framework of the area’s cultural projects or within the context of cross-sectional commitments. For large cultural establishments, the commitments are written as part of a cultural cooperation charter. They are part of public service missions. More than 180 commitments have been written into work cycles that last a minimum of 3 years.

Calls for projects support the initiatives. 70-80 operations are funded every year. The budget for direct intervention is €1.3 million: 50% from the city, 25% from the region, 25% from the State. Various evaluative and shared procedures have been implemented by actions, the area, thematic commitments and by the cultural cooperation charter. The dissemination of these practices began within the context of the metropolitan future. They then progressed to the Rhône-Alpes region (Saint Etienne city), to national level (Paris, Toulouse) and international level (Helsinki, Liège).

"Art is taking up the space", performance by 24 youths from the soccer department of Lyon Duchère in collaboration with the Contemporary Art Museum of Lyon and the artist Benedetto Bufalino", 7 june 2014, © Blaise Adilon In Mermoz neighborhood which is facing urban renewal, Ms. Reynard is the 96 year old elder, and she has been living there for 60 years. She takes part in the « Root » project, being the godmother of a Prunus Serrulata tree. © Thierry Boutonnier.

4.3. Impact on the area and population

Making the city sustainable involves two key approaches: territorial and cross-sectional. Assessment tools for the different areas already exist and are being finalized for the cross-sectional commitments. As for gender equality, the focus work on 'social responsibility' involves:

Work on environmental issues will include:

AS A 'SUSTAINABLE CITY', IT MUST BE PHYSICALLY COMPACT, HAVE A RESTRAINED ENERGY, ECO-FRIENDLY AND GREEN. AS FOR THOSE WHO RUN THE CITY, IT MUST BE BALANCED, UNITED, RESPECTFUL, ENRICHED WITH SOCIAL AND INTERCULTURAL RELATIONS AND OPTIMISTIC.

The city of Lyon was a candidate for the first 'International UCLG Prize - Mexico City - Culture 21' (January-May 2014). The Awards Jury produced a final report in June 2014 and asked the UCLG Culture Commission to promote this project as a practical example for the implementation of Agenda 21 for Culture.

This article has been written by Marc Villarubias, Head of Lyon's Cultural Cooperation Mission. 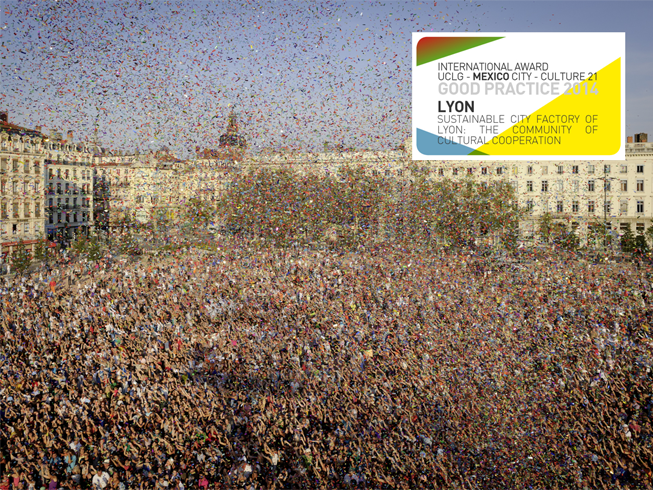