The flight of the Holy Family into Egypt

The path of the Holy Family represents the stop points of the Holy Family during its escape to Egypt. During their three and a half years in hiding, the Holy Family passed through or sought refuge in 25 locations across eight governorates throughout the country (Cairo, Beheira, Sharkia, Kafr el Sheikh, Minya, Assiut, Gharbiya and North Sinai). It is the longest pilgrimage route in the world within one country.

Egypt launched the project in 2014 to renovate and develop the path of the Holy Family in Egypt. The path would serve the almost two billion Christians around the world, especially after Pope Francis endorsed it as an official Christian pilgrimage in October 2017.

The project aims to preserve the cultural heritage of the sites, sustainably developing them culturally, socially and economically. This in turn aims to stimulate religious tourism, creating job opportunities and developing the infrastructure for the governorates.

As reported by UNICEF, 60% of the world population are practicing religious rituals. Additionally, there are 1.5 hundred million Christians around the world and 1.9% of people who visit Egypt do so for religious touristic reasons. Thus, it was estimated that there would be an increase of 3 million visitors as a result of this project. This project aims at enabling repositioning the Egypt’s Holy family path as an international tourism destination.

The project has been working on raising the quality of sites’ infrastructure, enabling pilgrims to be independent by providing full services around their visiting area. This is done in parallel with restoring ancient sites and monasteries. The project is a part of the mandate to develop and restore the historical, cultural, touristic and archaelogical role of Egypt.

This will be achieved through:

The Flight of the Holy Family is a national project, launched by Ministry of Local Development as a supervising entity, in cooperation with different stakeholders such as Ministry of Tourism & Antiquities, Ministry of Culture, the Coptic Orthodox Church and Eight governorates. It began with a number of planning and feasibility studies, learning from similar case studies, obtaining permissions and conducting hight level meetings. The project then worked on restoring the sites and improving their infrastructure. One of the main objectives of the project is to rehabilitate the local community surrounding the path point and develop its economic activities to suit the heritage and tourism needs of the path and to achieve interdependence, this contributed to achieving a remarkable urban and cultural development.

The ministry has collaborated with many entities across 27 governorates including the surrounded local communities in order to raise the quality of sites’ infrastructure, as well as restore ancient sites and monasteries. The project built on local experts, NGOs and academic institutions in the various governorates to ensure local ownership and sustainability of the interventions.

The project supports local communities by creating new job opportunities and developing existing ones. The project elevates the living standards in the targeted districts through building Infrastructure, rest points, parks, craft centres, bathroom breaks and facilities around the possible sites. The access to cultural services, and active participation in cultural processes, are essential to enable people who are marginalised, impoverished or in otherwise disadvantaged situations to overcome their difficulties and actively participate in their own inclusion in society.

Evaluation was an important process that critically examined the project. Thus, a working group formed by the Ministry of Local Development and Ministry of Tourism and Antiquities, along with other relevant ministries, the church and parliamentarians has been put in place to review and evaluate the project. The committee evaluates the project assessments and implementation process, along with the outcome and impact evaluation. The meetings of the working group include all possible stakeholders related to the development of the project.

The current phase of the project lays the foundation for effective and sustainable management of the programme at both national and local levels.

The key obstacles faced in the implementation of the project were related to social awareness about heritage preservation, the huge infrastructure required in the districts and budget constraints.

The project aims to preserve the cultural heritage of the sites, sustainably developing them culturally, socially and economically.

One of the key elements of the project was the effective coordination and cooperation between different stakeholders.

The project is built on a comprehensive, participatory and inclusive approach, which insured the involvement of the local population and other stakeholders in the creation of the project designed to serve them. The project also took into consideration cultural sensitivities and included the official Church throughout the process.

The project was inaugurated in early 2021, celebrating the end of the implementation of the infrastructure phase, all sites are ready to receive tourists around the world. The next phase will focus raising awareness about the project and the cultural preservation of the sites. The Ministry of Local Development, in cooperation with other stakeholders, will launch a media and social campaign, which will be led by a company under the supervision of Ministry of Local Development along with Ministry of Tourism and Antiquities. Planned eco-social projects developed by the governorates will also be twined with the main project aiming to empower the local community.

One of the main important stakeholders is the Egyptian Church and no step was taken without their consent and, where relevant, their permission. In the upcoming phase citizen, civil society organisation and NGO participation would be further solicited.

Cairo (on behalf of the eight concerned governorates) was a candidate for the third “UCLG Mexico City – Culture 21 International Award” (November 2019 – May 2020). The jury for the award drew up its final report in July of 2020, and requested that the Committee on Culture promote this project as one of the good practices to be implemented through Agenda 21 for culture.

This article was written by Amb. Dr. Mohamed Higazy, Advisor to the Minister of Local Development for international cooperation, Giza, Egypt. 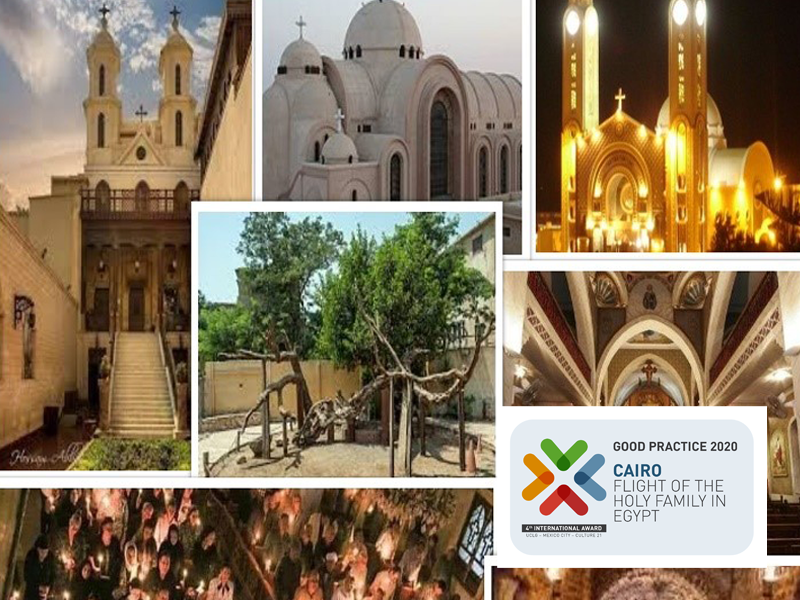