El Carmen de Viboral is located in the Department of Eastern Antioquia, covering an area of 448 km2 and home to 50,000 people (2013). It has 56 subdivisions throughout the political-administrative department, which is a rural area. Due to armed conflict, the ratio of inhabitants in rural to urban changed dramatically, displacing rural populations to the city centre or to other territories.

The economic importance of the city is linked to agriculture, although this sector has been shifting toward exporting flowers and milk due to the country's agricultural crisis and armed conflict. The economy is also driven by hand-painted ceramics, but suffered the economic crisis of the 1990s and almost disappeared. However, over the last 10 years this sector has been resurfacing, affirming itself as a key part of cultural heritage and an active economic driver as well as source of job creation in the craft sector.

El Carmen de Viboral stands out for its cultural activity, thanks to the progressive initiative of strengthening the institutionalisation of culture. The city's tourism and cultural attractiveness has been growing, preserving the characteristics of a traditional, "slow life" town as a result of its mlandscape, people, urban aesthetics, public meeting spaces, and active cultural agenda.

The 2016-2026 Municipal Cultural Plan is a cultural policy needed to strengthen social cohesion in a territory that has been broken and weakened by 10 years of armed conflict and violence.

The country's reformation through the Colombian Constitution of 1991 recognised diversity and multiculturalism as constitutive of the country's strength, which lead to reforms of the legal and institutional framework around culture. One result was the 2001-2010 National Culture Plan: "Towards democratic and cultural citizenship", which elevated culture to be the basis for developing social, political, and economic development that is broadly participative. Likewise, the Department Culture Plan called "The Diverse Voices of Antioquia" emphasised citizen participation as the foundation for cultural democratisation. Locally, the 2005-2015 Cultural Development Plan “El Carmen de Viboral with a Cultural Life” was the first public cultural policy for the municipality, and it
contributed to cultural democratisation by strengthening the recognition of identity, diversity, artistic creation, and citizens' sense of belonging.

The 2016 - 2026 Municipal Culture Plan for El Carmen de Viboral “A Place to Live the Good Life” affirms the importance of participation processes, spaces, and scenarios, which are essential mechanisms for establishing dialogue and synergies between different sectors, actors, and regional stakeholders for optimal governance. This is particularly important in the context of a country where a cycle of over 50 years of violence has played an instrumental role in excluding most people from political and economic life.

The Plan fostered participation by the public and private sectors, as well by community and civic associations. Furthermore, it received support from the Ministry of Culture, the Antoquia Institute of Culture and Heritage (ICPA), and various international cooperation programmes.

After the 2005 - 2015 Cultural Development Plan ended, the 2016 - 2026 Municipal Culture Plan was presented as way to generate new social and political practices for changing the popular perception of culture as simply a sector reduced to arts and aesthetics. The aim is to build a cultural democracy by moving towards a more inclusive governance model. This approach encourages participation and inclusion by all stakeholders in processes of debate and decision-making, while also fighting corruption and cronyism.

The initiative is laid out in El Carmen de Viboral's 2016-2019 Municipal Development Plan, A Territory for Life and Peace, and underscores inclusion as one of its fundamental pillars for “peace, rural life, and culture”. Furthermore, the Basic Territorial Ordinance Plan (PBOT) and the Local Tourism Plan are efforts to mediate, collaborate, and coordinate in order to make culture a driver of regional development.

Global initiatives such as Agenda 21 for culture, the Sustainable Development Goals outlined in the UN 2030 Agenda, and the New Urban Agenda are aligned with, expressed in, and part of this territorial development process for local development.

The main objective is to promote a territory that values and protects its cultural and natural heritage as part of its overall identity. It must strive to enable different types of expression, lend visibility to various artistic and cultural forms, recognise and support local identities and cultural rights, empower the existence of harmonious relationships between people and communities, and emphasise dialogue. Indeed, the goal is to recognise and value culture as a factor in human, social, economic, urban, and regional development.

The Plan has been adopted locally and regionally by the Institute of Culture, reinforcing its role as a leader in cultural mediation. It is a benchmark for neighbouring municipalities that have not yet implemented it.

3. COMMUNICATION AND PARTICIPATION FOR THE MANAGEMENT OF SUSTAINABLE LOCAL DEVELOPMENT

5. PROMOTION OF CITIZEN CULTURE AND THE EXERCISE OF CITIZENSHIP FOR BUILDING A PLACE WHERE PEOPLE CAN LIVE HAPPILY

Throughout the plan's approval process, leaders demonstrated a clear understanding of the difference between what culture is and what is cultural, broadening their perspectives and, in some cases, adopting new vocabulary for them.

The plan received widespread support from cultural agents and social actors. It was seen as guideline for local development:

Cultural public policies still require the use of more qualitative measurements that allow for interpretations and understandings that are closer to the lived reality of communities. Therefore, a Monitoring and Evaluation System was proposed for carrying out assessments and to seek out necessary concepts, methods, techniques, indicators, and other necessary systems.

Given the current lack of both baseline indicators and cultural data at the local level, one of the main challenges is to develop an assessment that uses a new baseline, and to expand the Monitoring and Evaluation System. This would help move towards a kind of regional development that is based on culture.

One of the key characteristics of this initiative is that it replaces an outdated notion of culture as a means and end for community development. The modern perspective views culture as a catalyst for the social and political transformation of populations.

The plan has different funds coming from local, regional, national, and international sources. Day by day it strengthens synergies with institutions, entities, sectors, and cultural actors that are part of the Municipal Culture System (SMCu). Among these are the Municipal Council of Culture and the Institute of Culture, which have formulated and manage a Cultural Information System alongside strategic partners: academics, researchers, managers, and creative entrepreneurs.

Carmen de Viboral was a candidate for the third "UCLG Mexico City – Culture 21 International Award" (November 2017 - May of 2018). The jury for the award prepared its final report in June 2018 and requested that the UCLG Committee on Culture promote this project as one of the good practices of implementing Agenda 21 for Culture.

This article was written by María Eugenia García Gómez, Director of the Institute of Culture of El Carmen de Viboral, Antioquia, Colombia. 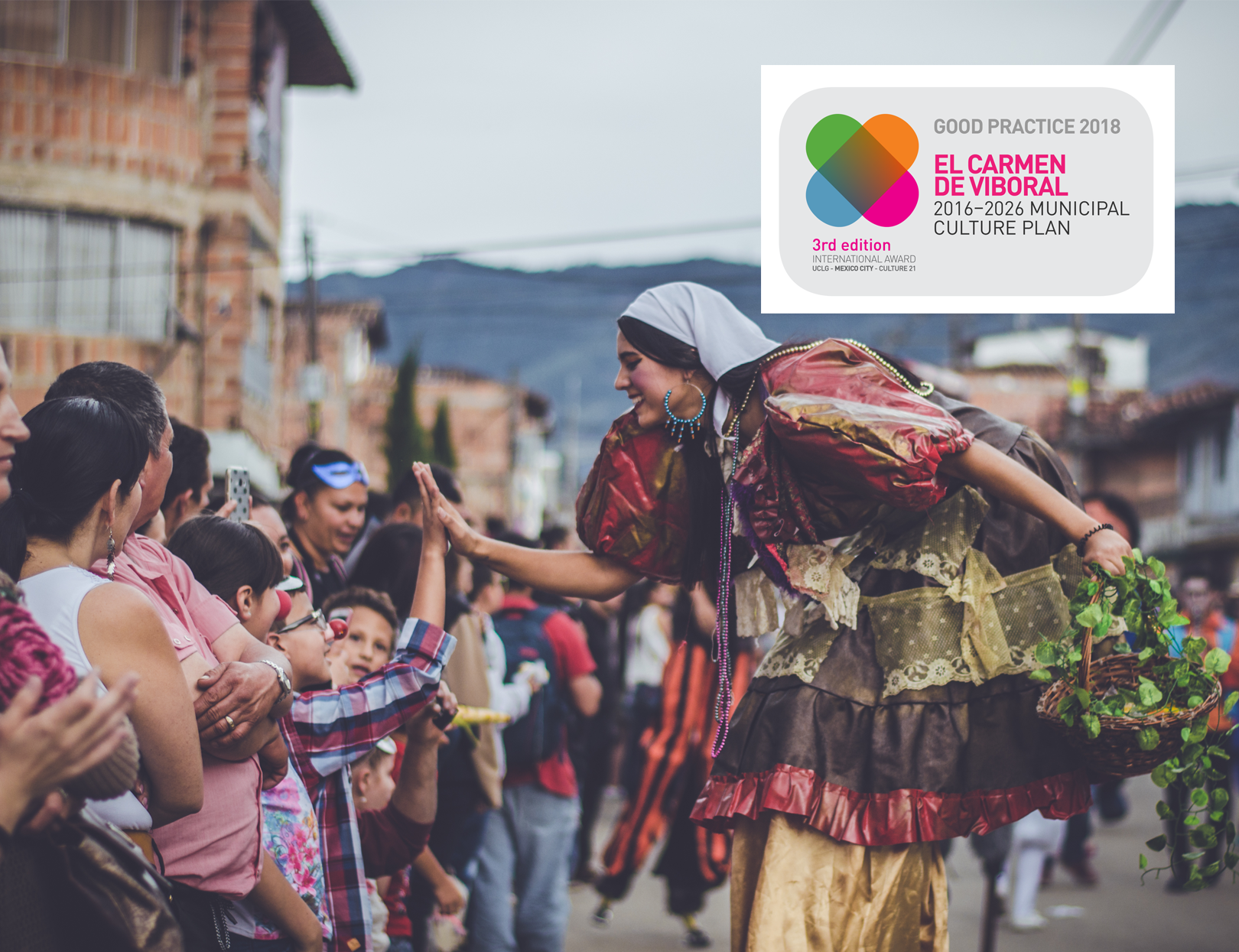