The Medina of Tunis was listed as a UNESCO World Heritage Site in 1979. It is made up of a central Medina (8th c.) and two suburbs (13th c.) and covers an area of 299 hectares. It has hundreds of historical monuments, 15,000 houses, and a well-preserved consistent urban structure. The area is home to 100,000 inhabitants, while the greater metropolitan area of Tunis has over 2 million. With a rich and turbulent history, the city became the capital of Ifriqiya in 1160. In addition to its importance as a religious centre, the Medina contains a large administrative and decision-making core with more than half of its ministries. Furthermore, it has education centres, cultural and tourism facilities developed by the private sector, as well as an extensive artisanal and commercial network.

The policy implemented by the municipal government in partnership with the Association de Sauvegarde de la Médina [Medina Conservation Association] (ASM) is part of the revitalisation of the historic centre and is based on actions with a comprehensive view of sustainable development. In the Arab region, Tunis was the first to consider urban conservation from an overall perspective. This has also made it possible to develop real knowledge about the historic centre. This is regularly updated by the ASM and used to promote an integrated approach to people and the built environment, without favouring heritage at the expense of the social structure. The aim is to make development processes accessible to citizens. It also makes it possible to reiterate the value of heritage by integrating it into economic, social, and cultural development processes. This renews citizens' senses of empowerment in maintaining and preserving their past. Finally, this initiative is aimed at raising the awareness and involvement of both citizens and NGOs in heritage projects. It therefore represents an intermediate solution suited to urban management problems.

The project seeks to preserve the unique character and unity of the old city, while ensuring its integration with rest of the capital, through a comprehensive approach that balances cultural and heritage values with social and economic issues.

Tunis is a true cultural centre with a number of actively contributing stakeholders. The municipality holds a prominent position in the local creative and arts scene. It considers culture to be a social need, differentiating it from entertainment. In response to expectations by both visitors and the population, Tunis is working alongside public, private, and civil society partners to establish rich and diverse planning. Among many other examples, the municipality's contribution to the cultural sphere is reflected in its theatre group and Municipal Theatre, which is a prestigious and prominent cultural space that is currently under renovations. Other important cultural spaces are distributed throughout the municipal territory, and include the Dar Ben Achour Library, the Bir El Hajjar Cultural Centre, the Yahia Art Gallery, and the City Museum. The cultural policy revolves around three essential areas: arts education (youth and children's clubs, promoting fields of art including dance and theatre); support for projects by cultural stakeholders (logistical, material, and non-material support, subsidies, provisioning spaces and resources for a number of cultural activities and events), and finally, the preservation of the tangible and intangible heritage (incorporating a cultural dimension into all rehabilitation operations).

This policy is in line with Agenda 21 for culture, particularly with respect to its comprehensive vision based on improving social well-being. It is fortified through a safeguarding strategy in both the heritage and social spheres, whose aim is to make development processes accessible to citizens. Promoting culture and emphasising the value of heritage as part of an approach to sustainable development in harmony with the natural environment, as well as the skills and technologies of the past, are a source of inspiration for carrying out projects under the cultural strategy. Involving the population in decision-making, strengthening civil society, and encouraging youth initiatives are also key factors. The municipality subsidises cultural associations, annual festivals, the Association de Sauvegarde de la Médina [Medina Conservation Association] (ASM), and other areas that emerged after the country's 2010-2011 revolution. In accordance with A21C, this policy also involves the diversification of cultural resources entrusted to the municipality. Finally, freedom of expression is guaranteed by the constitution, and is therefore crucial in allowing citizens to exercise their right to culture and heritage, as well as in enabling access to employment, and their environment. Furthermore, municipal initiatives are closely monitored by civil society through various forms of media and social networks.

The main goal of the project was to revitalise the image of the old city and redefine its role as Tunis's urban centre. It involved preserving the area's unique character and unity, while ensuring its integration with the rest of the capital, through a comprehensive approach that balances cultural and heritage values, social and economic issues, and cultural activity. The approach considers the fact that the Medina is a centre for cultural life and does not seeking to gentrify, fix, or even turn into a living museum. Instead, it allows inhabitants to fully experience their environment and era.

There are three phases of actions taken to pursue this policy. First is the creation, or implementation, of cultural facilities in the Medina and the new town (19th and 20th c. neighbourhoods). The aim is the restoration of the Municipal Theatre, which included reinforcing the building's old structure, upgrading its building services, carrying out renovations, and updating sanitation standards. It also involved the creation of a Mediterranean Centre for Applied Arts in the former Sainte-Croix presbytery. This included reinforcing the building, as well as restoring and converting certain areas into cultural spaces – exhibitions and concert halls, among others. Furthermore, this involved redeveloping the Bir El Hajjar madrasa into a cultural centre. Second was an increased emphasis upon the value of urban design in the Medina of Tunis. This was achieved by newly revitalising an urban event, continued from the same one carried out in 2010, called the "Tour of the Andalusian Quarter". This project is part of the National Urban Regeneration Programme (PNRU) and is co-financed by the national government of Tunisia, and the French Development Agency (AFD). The objective is to raise awareness in the population about the importance of their environment, offer an alternative to mass tourism, and initiate a project that benefits the local economy.

Finally, the promotion of creativity is reflected by cultural policy for urban regeneration, through the MEDNETA Project, led in Tunis by the ASM. It is the Mediterranean project for the promotion of creativity in arts, crafts, and design as a means for the regeneration of communities inhabiting historical cities. Financed by the European Community, it enables the development of sustainable strategies and pilot projects geared towards the socio-economic revitalisation of the historic centre. This is achieved by establishing synergies and creating a virtual Mediterranean laboratory. Inhabitants benefit primarily from this policy, as it seeks to transform the image of the Medina, while adding value to their homes and businesses. Prior to any intervention, they will be consulted on planned actions. The MEDNETA Project benefits many artists, designers, and craftspeople, adding dynamic to the sector. Thanks to a collaboration with the National Office of Artisans, the project also aims to improve cross-border trade and increased visibility of craftspeople in the Medina through media, publications, and films about their trades.

Tunis considers culture to be a social need, differentiating it from entertainment.

The new policy makes it possible for civil society and NGOs to fully participate in revaluing heritage, involving them in decision-making and submitting projects to public debate.

It makes both spaces and opportunities available to cultural stakeholders, artists, and inhabitants. The initiative creates a greater awareness of the potential of the historic quarters, as well as which of its characteristics should be defended and safeguarded.

The image of the Medina has been improved thanks to these projects of urban improvement, regeneration of the built heritage, and creating more cultural facilities. This has become a means for cultural renewal. Local investors carry out projects in the central area, encouraged by the dynamic character of the Medina, including restaurants, hotels, and art galleries.

The influx of tourism into the Medina has contributed to an increase in longer visits in the historic districts. As a result, the Medina is witnessing an increase in rehabilitation operations and the revamping of old structures. Nevertheless, it has avoided the trap of becoming a "cultural ghetto” – a characteristic of several historic cities whose populations have been driven out of these areas by new activity and the high cost of the living that follows.

Inhabitants benefit from this policy as it seeks to transform the image of the medina, while adding value to their homes and businesses.

While it is still too early to assess, similar initiatives throughout the Medina of Tunis are planned, which may draw conclusions from this project.

With regard to redeveloping the presbytery, Tunis has developed a management plan that involves a number of associations. The path of the "Andalusian Quarter" tour, should lead to the emergence of an eco-neighbourhood, with plants such as trees and vines in new green spaces to better combat air pollution. Other areas to be considered include the recovery of rainwater and its recycling, the use of more building materials with low environmental impacts in construction, selective waste sorting, and energy-efficient street lighting.

The City of Tunis was a candidate for the second International Award "UCLG – Mexico City – Culture 21” (January - May of 2016). The jury for the award drew up its final report in June of 2016, and requested that the Committee on Culture promote this project as one of the good practices to be implemented through Agenda 21 for culture. 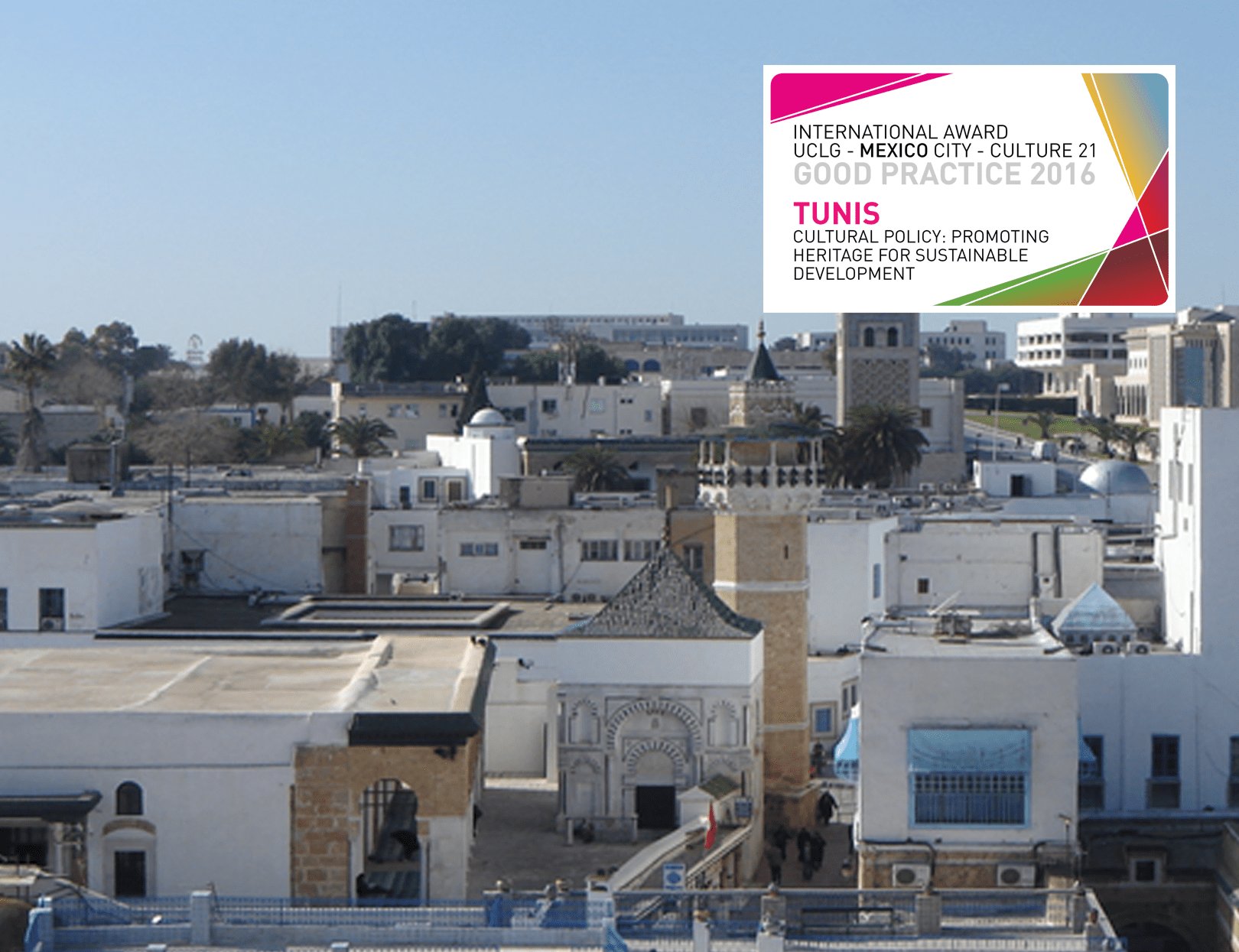