Trois-Rivières, the second oldest French-speaking city in North America, was founded in 1634 and is the seat of the regional government. With a population of 138,134 in 2020, it is the ninth largest city in the province of Quebec. Its prosperity was for a long time driven by the manufacturing and paper industry, which entered into crisis in the 1990s. Its current economic framework is mainly characterised by tertiary sector activities.

The city is also the main cultural hub of the Mauricie region. It is home to the main cultural institutions: a university, technical colleges, a music conservatory, a symphony orchestra, theatres, an amphitheatre, museums, art galleries, exhibition centres and heritage sites.

This concentration of cultural institutions, together with numerous festivals and cultural events, is largely responsible for the cultural dynamism that characterises the city. This creative wealth earned Trois-Rivières the title of Cultural Capital of Canada in 2009.

During the 20th century, the city was regarded as the ‘paper capital of the world’. In the 1990s, the industry underwent significant economic changes leading to the closure of factories. Faced with job losses, the city was gripped by gloom and inactivity and therefore decided to make culture a driver for change and economic development.

Trois-Rivières was one of the first cities in Quebec to adopt a cultural policy in 1993 and to create a para-municipal body to implement it in 1997: Culture Trois-Rivières. Its mission is to serve as a link between the municipal government, all those involved in the cultural sector and citizens.

Over the years, culture has been integrated into various aspects of local development, due to its inclusion in the city’s various policies: family policy (2004), policy for the integration of people with disabilities (2005), social development policy (2005), public art policy (2006), age-friendly municipality (2012) and tourism development strategies put forward by the body responsible for tourism (Innovation et Développement Économique - IDÉ). More recently, a new sustainable development policy (2019) has been developed that includes culture as one of its guiding principles.

In relation to the commitments of Culture 21: Actions, the cultural policy of Trois-Rivières proposes in particular the following commitments:

The cultural policy of Trois-Rivières is based on the following Sustainable Development Goals of the 2030 Agenda: 1, 9, 10 and 11.

The overall objective of the Trois-Rivières cultural policy is to make art and culture the cornerstones of sustainable human development through the implementation of a sustainable cultural development programme.

The cultural policy of Trois-Rivières aims to make culture a driver for sustainable development and a key factor in tourism and social development strategies, in spatial planning and in restoring the population’s sense of belonging and pride.

In order to maintain and improve the conditions and quality of life of the entire community of Trois-Rivières, the city establishes culture as a fundamental right for its population.

The city also decided to promote culture as a driver for spatial planning and transformation, through integrated planning of the concepts of development, greening, urban revitalisation and mobility while developing a sustainable environment focused on improved quality of life for citizens:

Making culture a pull factor for the city, especially for the development of tourism, acknowledging the important economic impact generated by the cultural sector. On this basis, IDÉ Trois-Rivières has included the cultural sector in its strategic implementation plan for the 2020–2025 period:

Today, around ten festivals and events are held in the Trois-Rivières area, including four of international standing. The area is home to two self-managed artists’ studios and two publishing houses as well as a symphony orchestra and an internationally-renowned theatre company, Les Sages Fous, which tours several times a year and enjoys a good reputation in Trois-Rivières. Moreover, the city has almost 70 cultural organisations that contribute to its cultural vitality. The cultural attractions of Trois-Rivières are an important feature of its tourism and economic development. Trois-Rivières has quality municipal infrastructures, such as five theatres, two exhibition centres, a museum, two heritage interpretation centres, a historic quarter, a church converted into a cultural space, a network of five libraries and an open-air amphitheatre seating 9,000 people.

The latest investments in the amphitheatre and Boréalis attract more than 200,000 visitors a year. In other words, if all the cultural and artistic activities are added up, their tourism and economic impact has enabled Trois-Rivières to diversify its economy. Furthermore, the city was named Canada’s cultural capital in 2009.

It should be noted that 12.49% of the municipal government’s budget is devoted to culture. The city also gives credit to and thus recognises the work and role of almost 70 cultural and artistic organisations within its territory. With this recognition came increased financial support from the municipality.

Dialogue and a close relationship with cultural, community and school organisations, as well as with economic development authorities, allow us to constantly readjust our aims and the progress of our activities.

In 2020, the city of Trois-Rivières will begin a process of reviewing its cultural policy. The task will consist of gathering the necessary information to devise the policy together with the different agents involved, analysing the state of culture in Trois-Rivières, diagnosing the strengths and weaknesses and threats and opportunities, and identifying the main cultural challenges of Trois-Rivières. The reviewing process will also include focus groups and a public consultation as well as the preparation of an action plan based on this new policy.

The initial foundations of the reviewing process have been laid with the organisation of the first ‘cultural clinic’ in January 2019, in the form of a collaborative and cross-sectional workshop, in which more than 50 participants from municipal, cultural, tourism, community, economic and environmental sectors took part to acquire a common outlook and develop a proposal for a joint action plan for the sustainable development of the community.

The city intends to maintain its various agreements with its partners, as well as its achievements in terms of cultural infrastructures, so that its citizens can enjoy optimal cultural and artistic experiences, such as, the project to adapt the main performance hall to meet standards in the coming years.

The city is currently working to update its programmes to support and serve cultural organisations. In 2020, Trois-Rivières will initiate a major review of its cultural policy in order to integrate the concepts of Culture 21: Actions. The city will also work on a heritage policy in 2020.

Since the cultural policy was adopted in 1993, the city’s actions have been steadily increasing for more than 20 years. This represents a firm and ongoing commitment despite changes in local government.

The city of Trois-Rivières was nominated for the fourth edition of the International Award UCLG - Mexico City - Culture 21 (November 2019–May 2020). The Jury of the Award produced its final report in July 2020 and requested that the UCLG Committee on Culture promote this project as one of the good practices for the implementation of the Agenda 21 for culture and as a special mention for the fourth edition of the Award.

This article was written by Nancy Kukovica, Head of the Department of Culture and Library Trois-Rivières, Quebec, Canada. 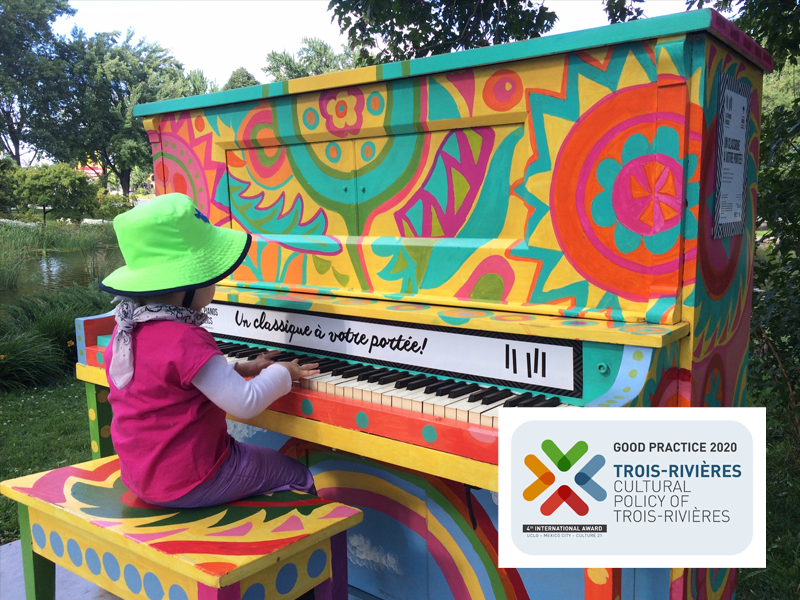