Niterói is a municipality in the Metropolitan Area of Rio de Janeiro. It has a population of 513,584 and the highest Human Development Index in Rio de Janeiro, being also one of the cities with the highest literacy rates in Brazil.

In terms of social indicators, Niterói has the lowest poverty rate and the highest monthly per capita income.

Over the last 30 years, Niterói has consolidated state cultural policy and is recognised across Brazil for public cultural policies at the local level. The Mayor’s Office and the Municipal Department of Culture have succeeded in creating a municipal culture system, advancing and innovating in promotional, outreach and funding programmes as well as citizenship and cultural diversity.

The 5th Niterói Municipal Conference on Culture is part of a process to broaden spaces for participation and reconfigure the city’s cultural focus, furthering investment and facilities in peripheral districts. It is aligned with the documents and policies of the Agenda 21 for culture. The Conference promotes social inclusion, contributes to the local economy, offers information, access and knowledge, engages in dialogue across the whole population on public cultural policy proposals, and demonstrates the use of public space based on diversity and creativity.

It is connected to the SDGs through the promotion of human rights, health and well-being, education and innovation, peace, justice and a reduction of violence. Moreover, it fosters respect and supports the fight against any form of discrimination as well as promoting gender equality. The Conference also promotes economic growth, thus contributing to a reduction in inequality.

Its aim is to involve government and civil society in the debate, diagnosis, formulation and deliberation of issues related to local cultural policies.

The aim of the Conference is to promote a form of open popular consultation by involving government and civil society in the debate, diagnosis, formulation and deliberation of issues related to local cultural public policies. More specifically:

In November 2019, the Conference opened with the International Culture and Democracy Seminar.

In line with this process, some 50 phases of direct popular participation have been carried out, according to sectors, districts and themes. The aim of the Conference is to encourage debate on cultural rights with the city’s communities, districts and artistic/cultural segments. As part of these phases, proposals are approved and delegates are elected for the final Plenary Session, which will approve proposals and directives that will guide the city’s cultural policies for the next 10 years.

I) International Culture and Democracy Seminar: debate on cultural policies and the establishment of directives.

II) Niterói Culture Forum: the Municipal Council of Cultural Policy deliberates on the internal regulations, calendar and methodology of the project.

V) Final Plenary Session: a meeting between elected delegates to approve and prioritise the proposals in order to implement the objectives, targets and initiatives of the Municipal Culture Plan.

The Niterói Municipal Council for Cultural Policy (CMPC for its abbreviation in Portuguese) is a supervisory body for the Municipality’s cultural initiatives, which directs and deliberates on the formulation and execution of the Municipal Government’s cultural policy, based on the principles of transparency and democratisation of cultural management.

The Council is co-organiser of the 5th Municipal Conference on Culture and brings together the different Sectoral Associations that represent the city’s various artistic and cultural segments. The Council approves the calendar and internal regulations and is responsible for the implementation of the sectoral phases of the conference process, in constant dialogue and interaction with the government, which, as part of the Municipal Directorate of Culture, has set up a Department of Popular Participation.

The project’s most important political advancement is the priority given to the district-based phases and the involvement of citizens as a whole, involving the general population.

Broad popular participation among cultural facilities and sectors is concentrated in the city centre and southern districts due to historical links to participation and the construction of cultural facilities within said area. However, the district-based phases point towards the decentralisation of activities: the largest number of delegates were chosen from northern districts and the number of participants is proportional to the number of phases in each district. On the other hand, the incorporation of sectors that are part of the CMPC and that, in light of this, should theoretically be highly mobilised and participative,should also be considered an obstacle for calculating the number of people who participate and are mobilised.

This data, however, is already being analysed, reviewed and evaluated in order to reverse these obstacles.

During the Conference, 742 people volunteered to participate in 27 phases and 160 were elected as delegates. The result was 56 proposals and 38 endorsements. It also included 15 artistic/cultural activities and the work of 66 artists from different segments and districts of the city in which the phases were held.

The project will allow a Municipal Culture Plan to be built based on popular voices and will strengthen other sectors of society such as education and the environment, building credibility and confidence in the local government and contributing to strengthening the exercise of citizenship.

Moreover, against the backdrop of the serious setbacks to the federal government’s public policies – the dissolving of the Ministry of Culture, the drastic budget reduction and ideologisation of the cultural sphere, and harassment of artists – the 5th Municipal Conference on Culture stands as an important counterpoint, at the national level, asserting the importance of democracy as a fundamental and indispensable condition for the exercise of cultural rights.

The main evaluation mechanism is the Data and Indicators Sheet, created by the Department of Popular Participation and the CMPC, which translates the democratic, decentralising and participatory nature of the Conference into figures and data and allows the Congress and its progress to be followed in real time. Its indicators allow for the identification of the aspects that can be readily improved, making adjustments and amendments possible even during the Conference itself.

Against the backdrop of the serious setbacks to the federal government's public policies, the Conference stands as an important counterpoint asserting the importance of democracy as a fundamental and indispoensable condition for the exercise of cultural rights.

On the one hand, the success of the project is linked to continuous cultural policy, with parameters and guidelines that were established at least 15 years prior and that have been continually in effect in the municipality with the budgetary and political support of municipal leaders.

At the same time, the main innovation of the Conference is the expansion of popular participation beyond artistic and cultural segments, involving districts and communities, fostering debate on culture as a fundamental condition for the exercise of citizenship and the right to the city.

The process of the 5th Niterói Municipal Conference on Culture was suspended due to the COVID-19 pandemic in March 2020. The decision was taken by the Niterói Municipal Council for Cultural Policy (CMPC), in an ordinary meeting held in the first half of 2020, due to the social distancing measures implemented by the city to combat the pandemic and the fact that the Conferences’ progression would require face-to-face contact and possibly large groups of people and would therefore be unable to take place.

In the first quarter of 2021, the Municipal Department of Culture began the process of developing the Niterói Charter of Cultural Rights. Inspired by the experience of the city of San Luis Potosi (Mexico), the Charter is being drafted in an exhaustive participatory process that so far has already assembled over 700 people in virtual meetings involving the municipality’s most diverse cultural segments. The document is scheduled to be presented publicly in July 2021.

Niterói was nominated for the fourth edition of the International Award UCLG - Mexico City - Culture 21 (November 2019–May 2020). The Jury of the Award produced its final report in June 2020 and requested that the UCLG Committee on Culture promote this project as one of the good practices for the implementation of the Agenda 21 for culture.

This article was written by: 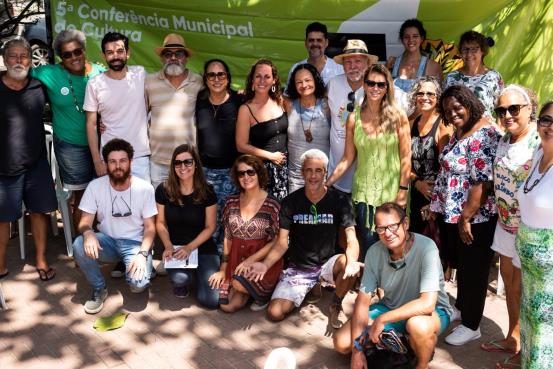