Ségou is the prestigious capital of the former Bambara Empire, located on the banks of the Niger River 240 kilometres north-east of Bamako, in the heart of West Africa.

Home to 133,501 inhabitants (RGPH 2009), Ségou is the fourth largest region of Mali and the regional capital. The city covers an area of 37 square kilometres, located at 13.27'N and has an average elevation of 287 metres. Ségou is an important city in Mali, organised into 15 districts and boasting various established, decentralised services by the State. The population is primarily made up of the Bambara, Bozo, Bobo, Mandinka, Soninke, Fula, Sono, Minyanka, Dogon, Mossi, Songhai, and Samogo peoples. The three religions that are primarily practised here are Islam (80%), Christianity (10%), and Animism (10%).

Despite all the interesting and diverse initiatives, the city is in need of strengthening synergy between cultural actors, and a better structure for the cultural sector with a comprehensive and coherent cultural policy for the city that takes into account its cultural identities.

The "Ségou: A Creative City" project is part of the regional urban development plan (STRAT). Specifically, the goal is to, "Make Ségou an attractive region based on its economic, cultural, and tourist qualities, and therefore make it the economic capital by 2030". As such, one of the three major challenges for this project is to ensure "the preservation and economic development of tourism, crafts, and cultural heritage."

Indeed, the "Ségou: A Creative City" project was initiated by the Festival on the Niger Foundation in partnership with the City of Ségou. The programme was implemented to help facilitate all initiatives and strategies, to consider new issues and potential cultural development, and to put culture at the heart of local development.

Today, Ségou is a city of cultural excellence, with a growing number of initiatives such as the Festival on the Niger, the Kôrè Cultural Centre, the N'Domo Centre, Certifex, the Office du Niger, and the Smart Ségou Association.

The overall goal of Ségou's cultural policy is to make art and culture the pillars of sustainable human development through the implementation of the Sustainable Cultural Development Programme (PDCD).

The "Ségou: A Creative City" programme was developed between March and August 2015. It was unveiled to the public at an information seminar launch, along with a brochure, in the presence of the city's local authorities and industry stakeholders. The programme's coordinator is an expert in regional marketing, recruited by the "Council for Promoting the Local Economy (CPEL)", a local development agency. The initiative is aimed at local populations, specifically cultural actors, civil society, artists, youth, women, and community staff.

Its first year, from August 2015 to August 2016, was dedicated to making connections with partners: the Regional Office of Culture, the Council for Promoting the Local Economy, continent-wide Arterial Network organisation, the Kya network, and the Festival on the Niger.

In December 2015, a workshop was held that brought together cultural actors, artists, civil society members, and local authorities in order to detail the cultural identities in the city of Ségou. At the end of the workshop, 4 key areas were identified: Music, design and fashion, visual arts, and capacity-building for cultural actors.

The programme is centred on 4 major themes related to the cultural identity of Ségou: music, design and fashion, visual arts, and capacity building of cultural actors.

In June 2016, seven priority areas for the city's cultural policy were outlined, which led to the creation of seven pilot projects, some of which were implemented between July 2016 and December 2018:

Alongside the project's fundraising and communication activities, a capacity-building programme for artists and cultural actors was developed in partnership with IKAM. Three training sessions were held: a launch seminar focused on the concept of the creative city, a workshop on sound and lighting techniques, and a training session for cultural management.

The main issues that arose during the implementation of the programme included:

Management by experts in cultural development, assessments by a management committee, and renewed commitments by technical and financial partners all help to ensure the programme's quality and sustainability.

The programme has a management committee with an elected representative from the Ségou City Hall, an expert in the management of creative cities for Mali, and a civil society representative. Together, they oversee and approve all the project's activities. Assessments are led by experts in cultural development and regional marketing, which helps to ensure quality, relevance, and sustainability.

Monitoring and assessment, as well as communication activities were carried out throughout the implementation of the project, at periodic meetings between the stakeholders involved. The main objective of this monitoring process is to identify the strengths and weaknesses of the programme's initial stages. Secondly, it will make it easier to draw on this experience for lessons that can be implemented into written reports. These can subsequently be published and shared on a larger scale across the city and even beyond.

The key factors for the success of the programme include:

The involvement and commitment of cultural actors, local elected officials, and civil society in the implementation process helps guarantee the project's sustainability.

Ongoing support from technical and financial partners helps to guarantee the project's continuation, particularly from the Festival on the Niger Foundation, the Ségou City Council, and partners from other creative cities who have renewed their commitment.

The CCEC is a network for exchange, sharing, and creative collaborations (co-creation and co-production projects) between three creative cities (Ségou, Nouakchott, and Pointe-Noire) focused on hands-on field work, as well as exchange of experiences and good practices. This involves advocacy for developing cultural policies, capacity-building for cultural actors through various IKAM (Kôrè Institute of Arts and Crafts) organisations and the Touring Network (artist exchanges, co-creation, and co-production).

The City of Ségou was a candidate for the third annual "UCLG Mexico City – Culture 21 International Award" (November 2017 - May 2018). The Jury of the Prize drew up its final report in June 2018 and asked the UCLG Committee on Culture to promote this project as a best practice in the implementation of the Agenda 21 for Culture, and as a special mention of the third edition of the Prize.

This report was written by the Ségou: A Creative City organisation, Ségou, Mali 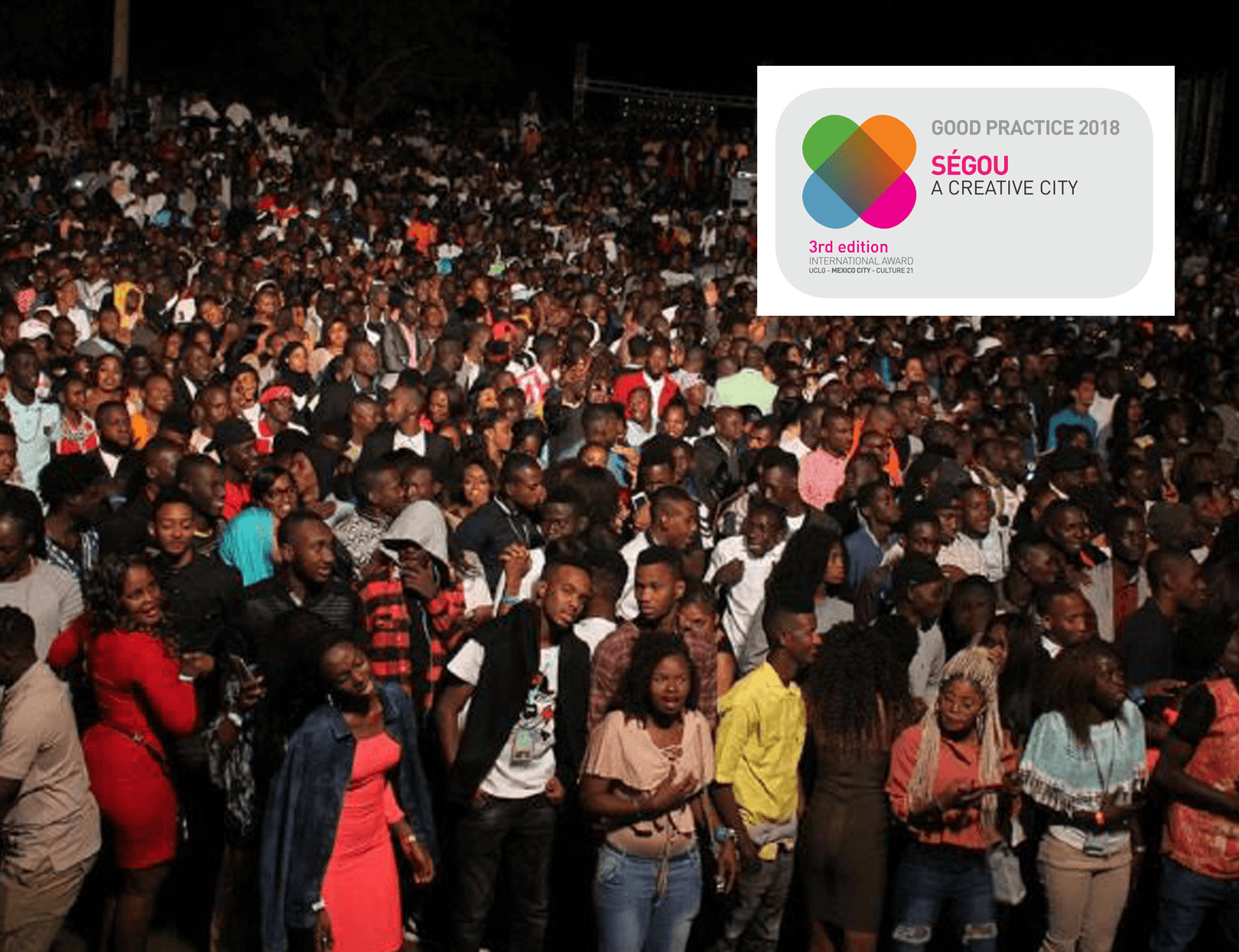