Osmangazi is a historical and touristic location with 862.516 inhabitants, the biggest and central district of Bursa and the most developed district in terms of economic and cultural indicators. Osmangazi has historical and cultural richness, mountain and thermal baths, agriculture, unique nature and fertile lands and, industry and trade with its industrial facilities and hinterland.

Bursa was the first capital of the Ottoman Empire. It shelters people from different ethnic and geographical background, and has always been an important administrative center.

Also, the Municipality designs cultural activities taking the local values into consideration and promotes them. The city aims to create a public space with the socio-cultural, historical, touristic, economic and educational functions fitting to the urban aesthetic values.

Panorama 1326 Bursa Conquest Museum is the focal point for the creation of the local cultural policy, based on the traditional roots of the city and which considers the creation of a modern living environment while preserving the heritage.

The location of the museum is the final point of historical bazaars and khans, which is a part of the UNESCO Heritage List. Osmangazi is willing to re-popularize the traditional way of shopping and to promote local and sustainable development through tourism and the economy.

Panorama Museum depicts the day of the conquest of Bursa on April 6th, 1326 but it does not include any violence and instills the visitors the importance of peace. It is focused on the reigns of the first six sultans of the Ottoman Empire, but it does not exclude the previous and following historical period of the city. It is disabled-friendly and offers other activities such as the traditional archery section and library.

The design of the museum was carried out in consideration of the energy effciency and reusable/renewable resources (SDG 7), obtained at the nearest purchase options (SDG 12).

Our overarching objective is to protect and preserve our historical values, and transmit our history to future generations.

The general aim of the project is to contribute to the brand-marking of Bursa, as a historical and cultural city, in future projections. To construct a building in conformity with “green building certifications” and in cooperation with the university befitting the modern look of Bursa was also aimed. Moreover, one of the greatest ambitions of this project is to fulfill the requirements of ecological architectural perceptions.

Our ambition was to bring a different perspective to museology and reach people in non-classical museum approaches.

Our ambition was to bring a different perspective to museology and reach people in non-classical museum approaches. It was intended to build a unique and symbolic building.

We wanted to reach future generations and solidify the historical identity. Therefore, joint projects have been launched with the Provincial Directorate of National Education, so that students visit the museum on daily trips. The museum holds intensive school trips during school term, and relevant information from the museum would also be provided to other educational institutions abroad. Furthermore, informative initiatives to the tourism agencies would be conducted to attract local and foreign tourists.

Drawing the attention of many people through international platforms to promote the museum would be a direct contribution to the economic development in terms of tourism and preservation of historical values. The use of the internet and other media and promotion and advertisement campaigns have been carried out to reach these aims.

Various socio-cultural, educational and promotional activities are taking place in the museum. Approximately 200 events have taken place within the museum since June 2019. The museum is a platform for those people with knowledge of history and culture, which has become a touristic focus on local, national and international levels.

The project was carried out in cooperation with Uludağ University’s Department of Architecture and Engineering, and various expert academicians from other universities.

The projecting and designing phase of the museum was quite long as the characteristics of the building are unique. The diameter of the dome is 42 meters, which makes it the biggest in Turkey and the biggest panoramic museum in the world. This feature of the museum prolonged the construction phase due to static calculations. Paying attention to the location of our city’s geographical position on the earthquake zone, these calculations were meticulously done in order to enable a robust structure. Also, the waterproofing of the dome was challenging. Titanium-zinc alloy was used for the covering as it was environmental-friendly and cost-benefit for maintenance.

The construction materials chosen were entirely environmentally friendly and healthy. All wastes at the construction site were recycled. The building meets the green building certificate criteria including clean air emission, abstention from radiation and radioactivity while selecting the materials, recycling the used waters, energy efficiency and renewable energy usage.

The museum has become a total success after its inauguration. It was a national promotion, which encouraged more than 750,000 people from 110 countries to visit the museum within a year. More than 200 events including concerts, conferences, panels, folk dance performances were organized in the museum. It received 6 awards in one year.

Panorama 1326 Bursa Conquest Museum has become a member of the European Museum Academy and International Panorama Council to boost its recognition. It has become a must to visit for those coming to Bursa and tourist groups tend to launch their tours at the museum. It is also a living culture center for the local people with exhibitions and other cultural events, and has become an educational center.

The museum has provided a great deal of visibility and familiarity for Osmangazi and Bursa. It has become an indispensable place to visit for all the foreign delegations coming to Bursa, including presidents, prime ministers, ministers, mayors, politicians and celebrities.

The project has shown that local governments are able to erect such a building without any national or other external donors. It has ascertained what might be achieved with a meticulous budget planning. This is a vision being revealed that stands as a common model for other local authorities. It is a giant environmental-friendly investment that we hope that will inspire other entities.

Considering the location of the museum and the parking opportunities for the tourist buses, Panorama Museum has provided a remarkable contribution to the local economy. The visitors to the city are encouraged to walk around on foot without causing more traffic. Therefore, they are enabled to get to know the urban tissue of Bursa and to contact the local tradesmen for a traditional shopping chance.

Bursa can be a commercial hub for international companies. Business trips are ongoing across the city. We believe that more people will come to our city thanks to this promotion.

Considering the location of the museum, and the parking opportunities for the tourist buses, the museum has remarkably contributed to the local economy.

569 restoration and reconstruction projects have been carried out during the last 11 years. Thanks to these initiatives of Osmangazi Municipality, the Historical Khans and Bazaars Region of Bursa were listed among UNESCO Heritage List.

Approximately 200 events have taken place in the museum, which was visited by 750.000 people from 110 countries in just one year. These numbers are growing on a daily basis.

The museum is a public building, which means the general maintenance and expenses for the building, as well as the costs of the staff, have been undertaken by Osmangazi Municipality, which shows its commitment to maintain the project.

Standing as the vision project of the municipality, its continuity is certain due to the sustainable development goal of the city.

New technological appliances will be installed in the museum in the future, hence the services provided will be enhanced. We are willing to provide headset services in other languages and virtual museum appliance for a larger number of visitors.

Osmangazi was a candidate for the fourth “UCLG Mexico City – Culture 21 International Award” (November 2019 – May 2020). The jury for the award drew up its final report in June of 2020, and requested that the Committee on Culture promote this project as one of the good practices to be implemented through Agenda 21 for culture. 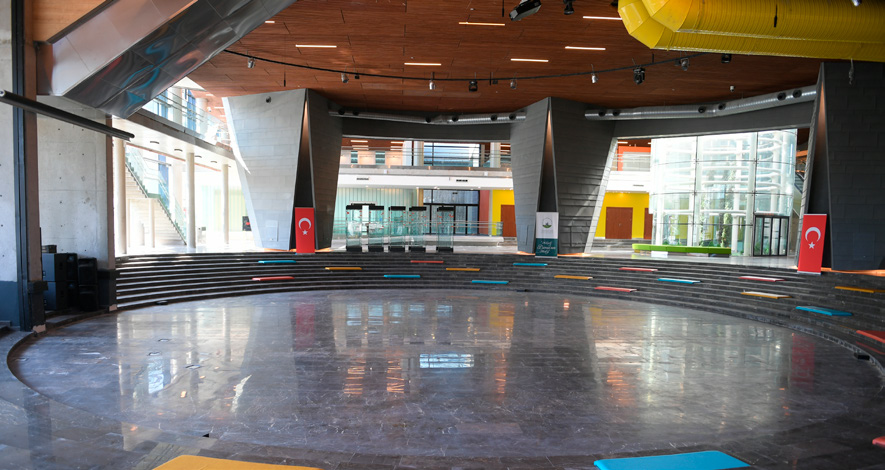