Konya is one of Turkey’s oldest continuously inhabited cities, and ranks as one of the great cultural centers of Turkey. Konya is home to various archaeological sites, natural protected areas, and variate gastronomy. Together with its religious importance and its deeply rooted history, its heritage makes Konya a nationwide cultural tourism centre.

The Mevlana Culture Valley Urban Regeneration and Transformation Project is one of the most important urban transformation projects in Turkey. It includes the historical center of Konya, the historical trade center and covered bazaar, the Mevlana Kulliyah, the Mevlana Culture Center and a high-speed train. An area of 175 hectares shall be regenerated and 76,6 hectares are determined as an urban transformation area. There are 7318 buildings, 371 of them registered and 17 museums in an area of 3.950.000 m2. The Mevlana Culture Valley was initiated by the Konya Metropolitan Municipality. The Ministry of Environment and Urbanization, public-private institutions and NGOs are other stakeholders of the project.

The vision of Konya Metropolitan Municipality to project the area and its environment, which has been physically, socially and economically damaged, is to review it and renew it and revive its former glory, increasing its potential to attract tourism.

Thanks to this project, the locations of the registered and other historical buildings in the city are determined; thus, the cultural heritage will be transferred to the next generations. Additionally, the urban regeneration and transformation have been designed to recover the areas which are economically, socially, environmentally and physically damaged. The project included the restoration of old mosques, tombs and other buildings, as well as the rehabilitation of streets and the pedestrianization of some roads. It is a long-term project and has many phases. When the project ends, the area will get its historical heritage reevaluated and become a complete touristic attraction.

The aim is to renew the area and its environment, which has been physically, socially and economically damaged, and revive its former glory, increasing its touristic potential by strengthening its trade center structure, preserving the area’s historical and cultural heritage, transferring the activities into tourism incomes by projecting its integration with the city, and developing this area in accordance with the modern urban design criteria.

The main specific objectives are:

In the third phase of the project the Castle artifacts on Alaaddin Hill are restored and protected against natural wear, excavations on the hill are carried out to uncover the remains of castle, and the square in front of Mevlana museum is redesigned so that more people can use it.

Within the scope of the second phase of the project, chimneys and roofs of the buildings have been rehabilitated, the sides of the buildings, plastered and dyed, and the show windows, renewed. The infrastructure lines of the area (potable water and sewer networks) have been gathered into a canal and rehabilitated, and the hydrant systems have been established. A total of 40 streets have been renewed. An area of 42.500 m2 and the sides of 1340 shops on ground floors have been covered with natural stones. Moreover, 1347 shops on top floors have been plastered and dyed.

In order to recreate the historical atmosphere of Bedesten, top coverage has been designed through street rehabilitation projects. The buildings with architectural and historical value have been brought forward becoming apparent. Plastering dying of the buildings has been renewed in accordance with the original structures. Wooden surfaces, such as bay windows or shutters have also been renovated, and missed and lost elements from original buildings have been rebuilt using similar materials. Worn parts have been changed. The led signs and signboards randomly placed over the shops causing visual pollution have been removed and replaced by new ones, which shapes and sizes are determined through regulation.

The merchants and shop owners in Bedesten objected to the project at first. However, when the pilot implementation was finished and the growing interest of visitors and tourists to visit the shops in the pilot area became clear, they understood that it would be beneficial for them and for the protection of the historical features of the city.

In the third phase of the project, the castle artefacts on Alaaddin Hill are restored and protected against natural wear, excavations on the hill are carried out to uncover the remains of the castle, and the square in front of Mevlana Museum is redesigned so that more people can use it. The light rail system that passes right at the center of Mevlana Culture Valley is designed to operate without a catenary system, meaning that no electric cables passing through historical buildings.

The fourth phase of the project started a week before the draft of this article. The facades of buildings alongside of Alaaddin Street between Aladdin Hill and Mevlana Museum are being rehabilitated and renewed in accordance with the historical structure of Mevlana culture Valley. This phase will be covered by the grants provided by the Bank of Provinces.

The Project has fostered Konya Metropolitan Municipality broad vision of culture and its interrelation with the preservation of historical heritage, its economic development and environmental protection, paving the way for more comprehensive municipal policies towards culture and all that surrounds it.

The preliminary and construction project has been prepared, tendered and currently applied. Some historically significant buildings such as Kapu Mosque, Aziziye Mosque, Bulgur Dede Masjid, Mecidiye Inn, Ahmet Efendi Turkish Bath and Nakip Hacı İbrahim Inn are located in this area. Moreover, the rehabilitation and establishment of museums can boost the already existent cultural sector of the municipality, which is economically strategic for Konya.

It is a multi-aspect and long-term project that includes the reallocation of public spaces and roads, the restoration of historical buildings and the renewal of building facades, meaning that all historical and cultural assets of the Mevlana culture valley are protected and guaranteed to be transferred into next generations.

As from 2020, the project covers 180.000 m2, with 519 buildings, 138 of which are registered. Within this area, 2.687 shops shall be rehabilitated and 84 street facades shall be restored and renewed, improving the living and working conditions of the inhabitants and workers. Through this project, the tourism potential shall be converted into economic profit, thus it is expected that the business volume of this bazaar will increase half a million US Dollars, potentially raising the income of the households and the population’s living standards.

Shop, restaurant and hotel owners of the region have been trained on established criteria to make the region attractive again for local people and tourists. Through random controls and questionnaires, their approach to customers is evaluated regularly. At the end of the process, they will be awarded with the title of “Tourist Friendly Enterprise” if they succeed in applying the criteria, meaning that customers can safely shop, eat, and stay at the places bearing that logo.

The economic impact of the project will be measured through questionnaires developed with the merchants and shop owners of the area, and the questionnaires of social impact will be drafted alongside citizens and tourists.

The project has solid outputs. One of the key factors of its success is the fact that is a goal-driven project, organized with series of activities grouped in phases and involving all stakeholders under the moderation of the Konya Metropolitan Municipality. It is also relevant that the project has a large scope, as it positively affects more than 200.000 citizens and tourists.

It is a multi-aspect and long-term project that includes the reallocation of public spaces and roads, the restoration of historical buildings and the renewal of building facades, meaning that all historical and cultural assets of the Mevlana Culture Valley are protected and guaranteed to be transferred into next generations.

Konya was a candidate for the fourth “UCLG Mexico City – Culture 21 International Award” (November 2019 – May 2020). The jury for the award drew up its final report in June of 2020, and requested that the Committee on Culture promote this project as one of the good practices to be implemented through Agenda 21 for culture.

This article was written by Selim Yucel Gulec, Head of Culture and Social Affairs Department of Konya, Turkey. 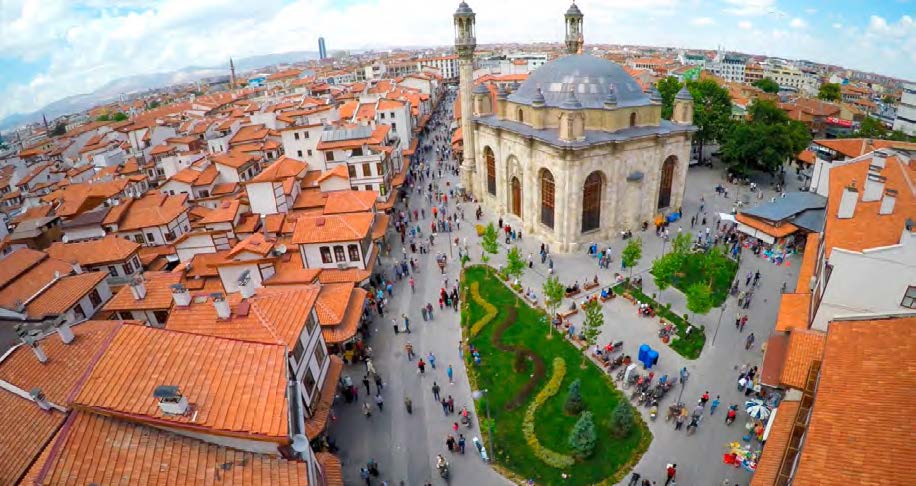