Hammana is a Lebanese town located in the heart of the Lamartine Valley, 30 kilometres from Beirut and 1150m above sea level. It is home to 8000 people, of whom about 3000 are local residents, while the rest are populations from around the world, including the United States, France, other parts of Europe, and the Arabian Gulf.

The President and Hammana Municipal Council are elected by the inhabitants every 6 years. The Municipal Council manages all administrative tasks. It is responsible for rehabilitation and restoration projects for the majority of the town’s infrastructures such as the old souk, cobblestones, arcades, and more. Hammana is famous for its cherry trees and is also the capital of "Haut-Metn", a regional grouping of 35 villages, in which many decentralized services are organized for the inhabitants of the entire region. The Cherry Festival has been organized since the 1950s and is a source of economic wealth for the village.

Following the civil war that further divided different communities, the Hammana Municipality aimed to develop a cultural public policy based on the diversity of its territory that focused on openness to others and coexistence.

It is within this positive local context thay an exchange project was developed with the city of Mâcon around two major events, the Joutes Molières and the poetry challenge, geared towards young people living in the mountain areas. The goal is to broaden their cultural horizons and to guarantee opportunities for exchange with other people living in France.

The territory is primarily francophone, yet it does not exist far outside the influence of English culture, with many schools providing a trilingual education in Arabic, French, and English. Two private institutions belong to the French Language Education Committee (FLEC) network (Saint Antoine College and Sisters of the Good Shepherd College), strengthening relations with the French institute in Lebanon. Furthermore, many Hammana students are studying at the university level, and some even at English-speaking universities. In addition, the Dr. Najib Abu Haidar Public Library and the House of the Artist are both examples of infrastructure that contribute to growing the cultural capacities of inhabitants and youth in the Hammana region. Finally, two major regional studies were carried out in the Haut-Metn District: A simplified development plan (the ARAL-LOGO European programme), and a Regional Charter on a Regional Natural Park (a decentralized cooperation project with the Île-de-France Region).

Objectives and Implementation of the Project

The main goal of the initiative is to foster openness and coexistence between the different mountain communities of the Hammana region, while implementing a policy of cultural, educational, and tourism exchange between the region and the French city of Mâcon.

Poetry in My City of Mâcon

Following an invitation from the Culture and Tourism Association of Mâcon (CTAM) and the Town Hall of Mâcon to the Hammana Municipality in 2012, 11 Hammana students were able to participate in the Women's Challenge, where Hammana's team won the Expression Award.

Two years later, in April 2014 there were 14 Hammana students who participated in the Mâcon poetry challenge on the theme of the absurd. What is more is they won the First Prize. In April 2016, Hammana students participated for the third time in the poetry challenge, and the 11-student team won the Honour Award, and were ranked in the top three. The partnership agreement between the two cities was renewed in November 2017, and was also held on May 5, 2018, when students won second place and won the Expression Award again.

Schools in Hammana throughout the region have enthusiastically become involved in these projects because the activities appeal to the intellectual and emotional capacities of students while facilitating linguistic, socio-cultural and practical skills.

The “Joutes Molières” theatre festival was jointly developed by the Municipal Council and education establishments in Hammana. Participating teams were accompanied by comedian and director Thomas Volatier, in collaboration with teachers from each school, depending on certain timetables.

Organized for the first time in May 2015, the Joutes Molières festival began with a parade of the participating teams, from smaller to larger. Plays were then performed one after the other before the jury and the public. When it was held for the second time in June 2017, a French team participated accompanied by a delegation from the Town Hall of Mâcon and the CTAM, which won the first prize, the Molière d'Or. In 2019, the Joutes Molières were held for a third time, and whose theme was “French songs”.

The cultural exchange project with the city of Mâcon has helped the Municipality of Hammana broaden its horizons, as well as strengthen its communication, openness, and reputation both on the national and international stages. Through this project, members of Hammana City Council have taken stock of the importance of creating new cultural and educational opportunities for Hammana youth.

Impacts on culture and cultural stakeholders in the city

Each stage of the operation is a pedagogical project in and of itself, with its own objectives and tasks. But the greatest strength of this project lies in the poetic or theatrical interactions through which students can demonstrate their talents and their artistic abilities. Young participants learn to view these two worlds from a professional perspective, while developing their linguistic and oral expression skills.

Impacts on the city or territory and its population

This project concerns young people in the wider Hammana region, including educators and parents, but it has also had a greater impact on the region’s entire population. French visitors have supported local Lebanese businesses by buying their products, while the same is true of the arrival of Lebanese tourists in French communities.

The evaluation stage begins by collecting feedback from all those involved in this project. This is taken during meetings between the Municipality, schools, and organizations that help manage the initiative. Another method for gathering concrete and immediate assessments involves using evaluation charts with precise indicators that help the jury during Joutes Molières theatrical presentations and the Poetry Challenge. Finally, at the end of each action, the strengths and weaknesses of each phase are identified, followed by an overall assessment of the entire project.

From the debut of the theatre festival in 2015 to its continuation in 2017, the project has shown other signs of success, such as the increase in the number of participants, and participation in the Poetry Challenge for 4 years.

The Municipality of Hammana has been involved in this cultural, artistic, educational, and tourism project since 2011 after signing a partnership agreement that was renewed in 2014 and again in 2017. It intends to continue this line of action by inviting young people from Mâcon to Hammana to discover a new culture, while simultaneously developing a new approach to cross-cultural exchanges between the two countries.

The City of Hammana was a candidate for the third "UCLG Mexico City – Culture 21 International Award" (November 2017 - May 2018). The jury for the award drew up its final report in June of 2016, and requested that the UCLG Committee on Culture highlight this project as a good practice in the implementation of Agenda 21 for culture, warranting special mention for the third awarding of the Prize.

This article was written by Daad Bou Assaf, Project Coordinator for the Municipality of Hammana, Lebanon. 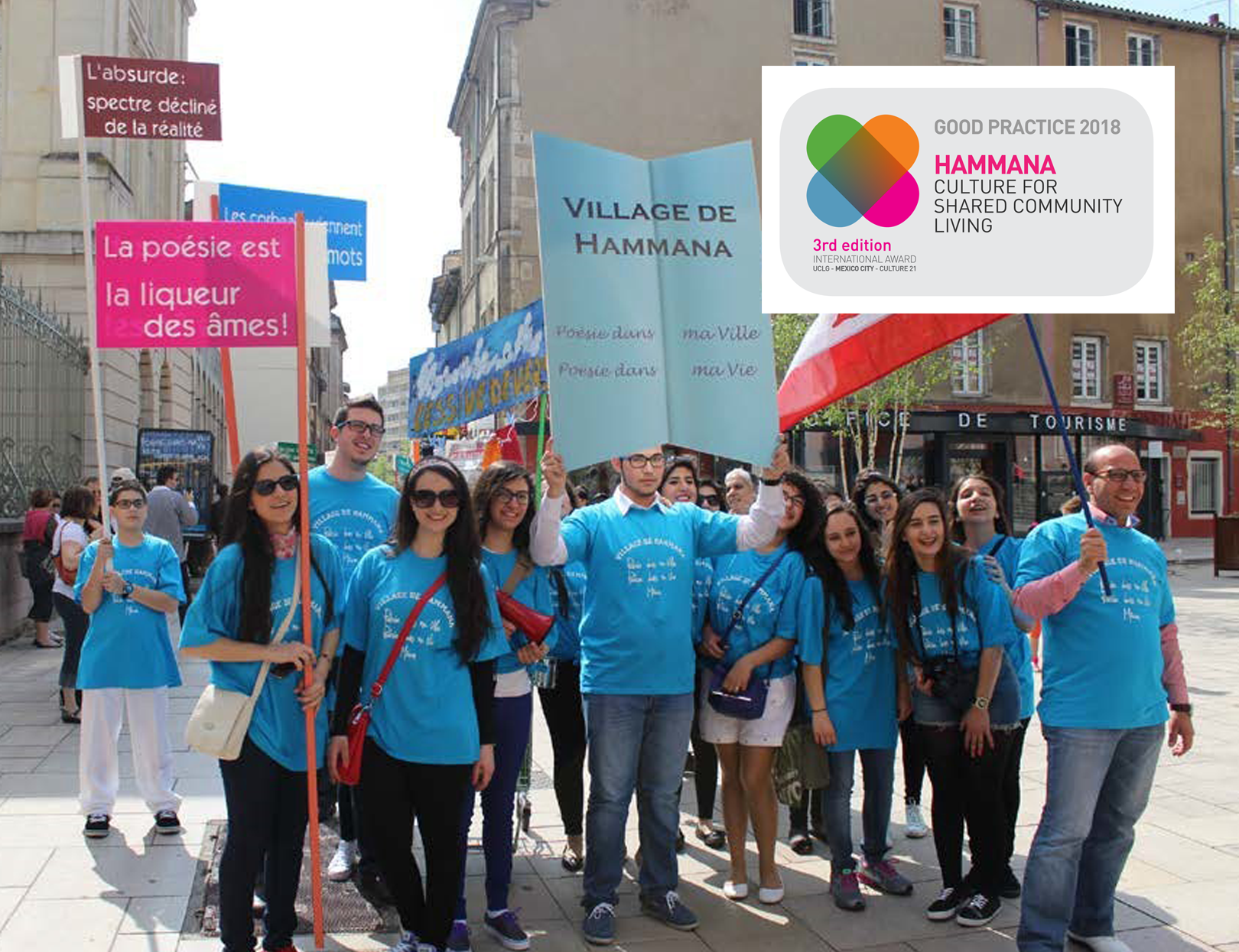