Chiang Mai, with 1.6 million inhabitants, is the second largest city in Thailand and the center of the northern province. It is a major agricultural hub and an important educational centre, also considered a key heart of Thai arts, culture and cuisine - renown as an innovator in handicrafts and performing arts, and rich in festivals. Moreover, it is an important city for religious pilgrimage, learning and tourism.

Culture is central to the city’s sense of being and a driver of tourism. The municipality’s local cultural policy and development work is located in the Chiang Mai Centre Museums Network which builds on the city’s indigenous Lanna heritage. For many years, Lanna cultural history was underrepresented in the country’s national story. Thus, the network aims to recover the regions’ specific heritage drawing on the unique cultural contribution of the Lanna (language, handicrafts, arts, knowledge, traditions, and wisdom) and the history of its Old City, built on the principles
of sustainable development, and its environment.

The municipality owned and managed the project and developed it alongside a committee of experts, academia, and other civil society representatives. The project seeks to recover Lanna people’s cultural rights, offer a municipal cultural space for collaborative civic engagement, enhance the city’s cultural tourism, build unique creative and cultural industries, and respond to challenges of environmental degradation.

This project is directly related to Agenda 21 for Culture, and the 2030 Agenda. It is in line with the following SDGs:

The project aims to be a catalyst for sustainable urban development in the city, offering opportunities for conservation, expression, information dissemination, dialogue, education and collaboration, linked to a local heritage promotion and cultural development mandate. It also provides a collaborative space to build relationships between local key stakeholders and promotes collective projects and activities to transform Chiang Mai into a liveable and sustainable city.

The network serves as a platform to learn and exchange about the city’s tangible and intangible cultural dimensions and as an opportunity to participate in issues of conservation and urban development linked to achieving a sustainable city. It is also an interpretive centre promoting the understanding of how the local values are shaped by its unique identity, history and cultural characteristics. Furthermore, the network campaigns for the Old City to be recognised and conserved.

The beneficiaries are the local population, who are able to participate in activities, such as initiatives around urban conservation and the tourism economy, which raise their quality-of-life; organisations, which benefit from the municipally supported public space to hold activities or performances; and tourists, who have quality places to visit and to learn about the city. Approximately, the network has had 1.4 million visitors from 2002 until 2019. (58,427 visitors in 2020)

The network has hosted exhibitions communicating the values of the city; provided space, learning and networking opportunities for artists and city-based organisations; promoted projects aimed at developing the city, such as initiatives focussing on environmental protection, public space development, traditional arts, crafts, and its link to contemporary creative practises; and held at least 10 major activities each year to promote local community, indigenous arts and crafts.

Together with various organisations, the network mobilised for Chiang Mai to be successfully recognised as a UNESCO Creative City. Crafts and Folk Arts is currently working towards World Heritage site status, including developing building control regulations.

The work of the network bringing together, art, history, urban development and sustainable development is new, thus it has taken time for it to be accepted. Bureaucratic systems are cumbersome and slow and the network has had to experiment with different governance forms to overcome the limitations of its institutional design and work better with civil society. This has, however, helped it to keep up with and be responsive to the changes in society. The network’s lack of resources has not limited its work but has strengthened its partnership development work instead.

The municipality of Chiang Mai was the first local government unit to set a museum under its own responsibility.

The Chiang Mai municipality was the first local government unit to set up a museum under its own responsibility. Due to its success, another two museums and a community library were established. Moreover, other provincial government units and municipalities have become interested in it as a model for their city museums.

The Network has become an important public space for participation, learning, creativity and expression, and has built an understanding of the cultural value of the region’s previously neglected indigenous groups. Furthermore, it has been a successful nexus of energies for sustainable city improvement through partnership.

As a result of Chiang Mai joining the UNESCO Creative Cities Network and its ongoing work towards the UNESCO World Heritage Site status, the profile of the city has raised internationally and brought renewed pride to its citizens.

As a result of Chiang Mai joining the UNESCO Creative Cities Network and its ongoing work towards the UNESCO World Heritage Site status, the city's has raised internationally and brought renewed prite to its citizens.

We collect annual statistics of visitors in the Chiang Mai Centre Museums, distinguishing between Thai visitors and foreigners, as well as children and adults. Audiences can also express their opinions by leaving comments at each facility. Results are collected monthly and ongoing adjustments to service are made without waiting for the end of year evaluations.

The board of the network is composed of experts and a group of academics. An evaluation committee annually evaluates the work of the museums and proposes recommendations.

Specific projects are the subject of a qualitative evaluation process. We also have a questionnaire for each activity following up a survey of people within the community to measure their engagement, interest, and participation in the exhibitions and projects. In addition, we draw feedback and comments on social media.

The effectiveness of the network is due to the facilitative and relational nature of the project, making its organizational capacity and resources available to create a connective and generative space.

The project is an atypical municipal cultural space which develops “cultural capital” to improve the city. Residents and visitors are given space for their expression, and to collaboratively research, learn and interpret knowledge about the city.

Exhibitions and activities have been set up to increase an understanding of and acceptance of indigenous peoples’ culture, creativities and traditions and use these to improve the city’s environmental conditions.

The Chiang Mai Centre Museums Network is a government body attached to the Urban Development Promotion, Policy Research and Planning Group in the Chiang Mai Municipality. The municipality supports its work with a budget for staff, utilities, equipment and materials, and a partial budget for the support of its activities. This gives the organisation stability and continuity in implementing activities while keeping it lean and adaptable. For the network to be institutionally sustainable, it covers its shortfall from ticket sales of museum visits and through partnerships. A portion of earned income is also set aside for adjusting the main exhibitions, major renovations, and emergencies. As a result, the network’s sustainability is strongly connected to its ability to be responsive to its local population, to be relevant for visitors and be able to build a strong set of partnerships with civil society, academia, cultural actors, the private sector and other national government agencies based in Chiang Mai.

Chiang Mai was a candidate for the fourth “UCLG Mexico City – Culture 21 International Award” (November 2019 – May 2020). The jury for the award drew up its final report in June of 2020, and requested that the Committee on Culture promote this project as one of the good practices to be implemented through Agenda 21 for culture. 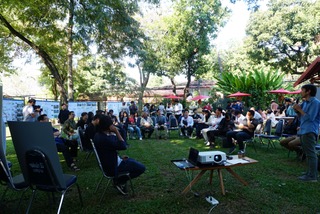