Taipei City, capital city of Taiwan, home to 158 monuments and 232 historical buildings, as well as 431 parks with playgrounds, is actively working to develop characteristic features such as local culture and history in order to showcase its individuality and originality.

In recent years, more and more people have been participating in municipal public affairs, and public–private partnership are increasingly being used to transform Taipei City into a city with its own cultural style and sense of design: a city that listens to its people’s needs, and that prizes community success, prosperity, and sustainability.

Recent cultural projects launched by Taipei city have increasingly brought in private-sector funding and staff expertise, while putting an emphasis on resident participation and the integration of local culture.

The main goal of these projects is to enlist private-sector human resources, funding, and creativity into local cultural projects, thereby including the citizens and involving more private enterprises in Taipei’s cultural renewal of its cultural landscape, in a way that strengthens the city’s sense of identity.

Here below are described two examples of public-private partnerships led in Taipei that emphasize public participation and the integration of local culture: the Old Building Cultural Movement, and Inclusive Playground projects.

Most publicly owned cultural assets in Taiwan, former dormitories or offices, have felt out of use and have been dilapidated owing to public staff and funding shortage. In response to this issue, the Old Building Cultural Movement project was launched in 2013 as a call for the private sector to help preserve and pass on the collective cultural memory of Taipei residents.

This was the first local government initiative to set up a matchmaking platform to gather together private-sector experts, funding, and creativity to help the public sector restore cultural assets and thus make up for public-sector shortages of personnel and funding.

Open calls were issued, inviting the private sector to submit proposals for the restoration and reuse of cultural assets that had fallen into disuse. Experts and scholars were also invited to form committees who would select the best candidates to carry out restoration work on old buildings and manage them going forward.

Once the restoration of a building is complete, the private-sector moves in to revitalize and manage the new building, turned into spaces for public use such as museums, bookstores, restaurants, and bakeries. This fulfils a dual purpose of conserving the cityscape and revitalizing cultural assets.

Since the launch of the project, 19 partnerships have been signed, saving over NT$200 million in public funds for the preservation of cultural assets. Of the 19 properties that have found private-sector support, 11 have been revitalized and now enrich the city’s cultural landscape, among which Granary No. 1, on Bade Road, which combines a fresh produce market, restaurant, and bakery; the former US military housing on Yangmingshan, now a baking art promotion site run by the patissier Yannick; and the 9 900m2 former US military club now houses the Brick Yard 33 restaurant, reconverted into a vinyl record museum, and an independent bookstore.

Taipei has 431 playground parks, which used to be equipped with mass-produced plastic equipment that create a uniform cityscape, without any regard for the needs of disabled children.

In 2016, Taipei City began the Inclusive Playgrounds project, part of its « Play for All » inclusive policy, focusing on participation, design, and inclusiveness. Artists, designers, and play equipment manufacturers were brought together with actual user and disabled groups, to create playground equipment that responds to local character, and are accessible to children of all abilities.

This project was founded on the principles of “three-stage” resident participation: before, during, and after construction. During the planning process of every new inclusive playground, meetings are held to enable children, parents, local residents, disabled people and experts to voice their views and opinions, thus making inclusiveness a key element from the very beginning. These meetings may take the form of local information sessions, observation workshops, children summer camps, expert planning, etc.

For instance, in the case of the DCA sub-project “Parks No Longer Look the Same”, participatory meetings enabled both the DCA and designers to get an overview of the variety of needs of users (e.g. the use of ramps, adjusting the height of play equipment to allow access for wheelchair users).

In addition, local cultures were reflected in playground design: In the Chaoyang Park in Datong District, located right next to “Button Lane” in the traditional haberdashery district, haberdashery motifs were integrated in the playgrounds dominant feature; Jiancheng Park has play equipment featuring cogs and other mechanical components as design elements, reflecting Chifeng Street’s heritage as a hub of blacksmithing and mechanical manufacture.

The Project implementation goes as follows:

Sites are selected from parks that have not already been scheduled for renovation. Current equipment is reviewed, and future design changes are discussed. Then, public opinions from nearby residents are gathered, and on-site behavioural observations and site inspection and environmental assessments are carried out.

An average of three to six public participation and expert planning workshops are held for each park, with the participation of designers in charge of subsequently designing playground equipment.

After canvassing the opinions of different groups, the designers draft a blueprint, which must be approved by Taipei City Government before a third-party institution’s verification. Once the blueprint is approved, a prototype play equipment is built, in compliance with the national program for playground safety. The finished equipment is subject to on-site inspection and safety tests by a third-party institution (including fall height ratings for safety paving, and entrapment risks). Once the play equipment passes inspection, the playground is opened to the public.

The burden weighting on Taipei City government’s public funding and human resources was significantly reduced. In the case of the Old Building Cultural Movement, the projects even increased revenues for the city government, which could charge property and land usage fees for three to nine years after the buildings’ restoration, thus increasing revenues and economic benefits for the city.

Both projects created new opportunities for cooperation in cultural life, creating a beneficial environment for the city government, residents, cultural and creative workers, and artists.

The combination of private-sector human resources, expertise and funding made it possible to restore and bring new life to a large number of disused cultural assets and buildings and to improve the cityscape within a short time, as well as the development of a cultural creative industry.

The new playground equipment also contributed to strengthen emotional bonds with the local community, while also raising public awareness about the needs of disabled people, who got the opportunity to make their voices heard. They also encouraged other local governments to pay more attention to children’s playgrounds and to emulate our practices.

The innovative Old Building Cultural Movement project has become Taipei’s best example of public-private partnership. In 2014, the project received honourable mention in the Taipei City Government’s 2013 Creative Proposals competition as well as an award in the sixth Taiwan Healthy City and Age-Friendly City competition, run by the Ministry of Health and Welfare.

In addition, many old buildings that were restored and reused as part of this project (Leputing, Granary No. 1, and the former US military club) have won the Reborn Old Building Prize from the Taipei City Urban Regeneration Office several years in a row. Many public-sector institutions have expressed interest in making their properties available for the project, and the DCA was praised by the private sector.

The inclusive playground project combines blue-sky thinking from members of the public and civil society with ideas from designers, while all the playground equipment produced must comply with Taiwan's CNS national safety standards.

One key success factor of both projects was the active participation of residents, who got a deeper understanding of the city government’s cultural policies, and thereby became more willing to participate and make their own contributions. The participating residents proved to be a formidable resource, and it was also possible to set up a mechanism for government and private sector cooperation.

In addition to the ongoing implementation of the Old Building Cultural Movement and Inclusive Playgrounds projects, the city government has worked on the amendment of Article 102 of the Cultural Heritage Preservation Act. In July 2017, the Ministry of Culture issued the Regulations Governing the Deduction of Rental for the Fund Contributor of Restoring Public Cultural Heritage, which reflects the spirit of the Old Building Cultural Movement.

In response to legislative changes, in December 2017, the DCA launched the Old Building Cultural Movement 2.0 project, allowing selected private-sector participants to deduct their restoration and day-to-day management and maintenance costs from building and land usage fees.

Meanwhile, Taipei City already invested a total of NT$130 million in 2016 and 2017 to create 17 inclusive playgrounds in city parks, and is continuing to push for at least one park in each district, with an additional 31 inclusive playgrounds to be completed by 2019. It is hoped that the transformation of city parks will be the beginning of an overhaul of the cityscape and so pave the way for the city’s sustainable development.

Taipei was a candidate for the third "UCLG Mexico City – Culture 21 International Award" (November 2017 – May 2018). The jury for the award drew up its final report in June of 2016, and requested that the Committee on Culture promote this project as one of the good practices to be implemented through Agenda 21 for culture. 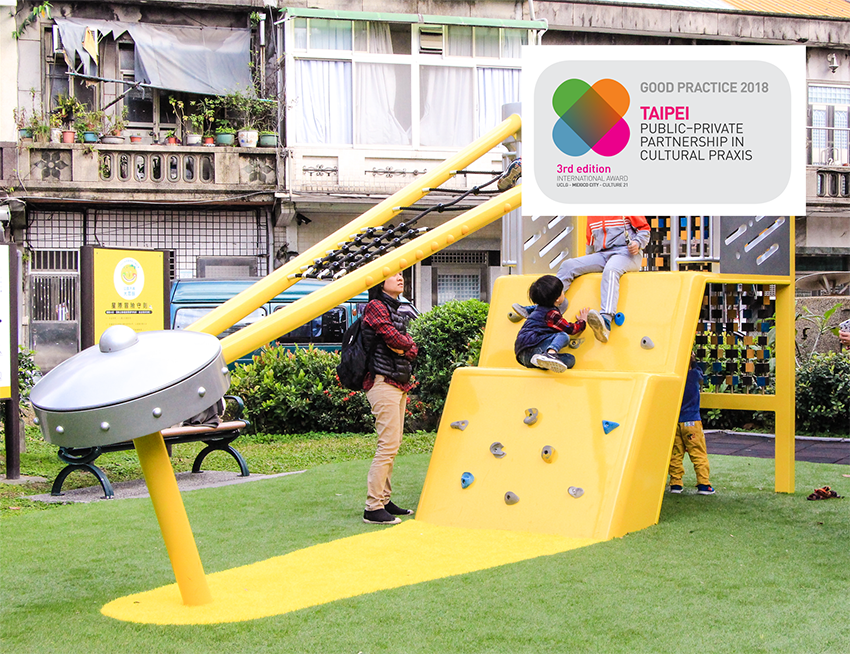