Semarang City is the fifth largest metropolitan city in Indonesia and the capital city of Central Java Province. Spreading over 373.7 km2, with 13.6 km of coastline, the city is divided into 16 subdistricts and 117 urban villages. With 1.7 million inhabitants, and 20.82% of them still classified as poor, Semarang faces an overwhelming poverty issue, encountered in every city in Indonesia.

The RPJMD set out the new vision of the elected Mayor as such: "Semarang City as Great Service Trade City Towards Increasingly Prosperous People". This vision shall materialize through 4 different missions, including one mission related to culture, defined as: "Realizing Cultured and Qualified Society Life". The RPJMD also highlights the importance of strengthening the local economy for the people, based on local assets.

The new vision and mission of Semarang will be implemented though the concept of "mutual cooperation" (Goyong Royong). This new mindset is embodied in the slogan: "Moving together to develop Semarang", which was developed in line with thematic Kampoing programme.

The Thematic Kampung initiative emanated from the Mayor of Semarang, Bp. Hendrar Prihadi, in a move to overcome poverty. It was later planned and implemented by the Regional Development Planning Agency (Bappeda). This program required coordination across agencies on social, cultural, economic and infrastructure aspects.

The main goal of Thematic Kampung is to overcome poverty and improve the quality of the living environment of the most disadvantaged people, provide basic housing infrastructure, and support the local economy as a leverage for regional development.

It aims to promote the “gotong-royong” culture of cooperation, collective work and social justice. Based on the “gotong-royong culture” and community empowerment, the community is expected to be the subject (active actors) of urban poverty alleviation programs in Semarang.

The Thematic Kampung Programme consists in the establishment of Thematic Kampungs in Semarang, through community empowerment and environmental improvement. Throughout the process, the community gets more knowledge on the characteristics of the region, and can map potential problems it encounters within the area, in particular regarding poor dwellings.

“Thematic Kampung” (“kampung” referring to a village or an inhabited place) defines a territory, under the administration of the urban village or sub-district, that showcases the identity/meaning of its community by highlighting its social, economic and cultural potential. The programme is implemented widely throughout Semarang, with one thematic kampung in each sub-district. Delineation for each Thematic Kampung is not rigid, but generally consists of approximately 50 to 500 houses administratively located in the sub-district area. Each Thematic Kampung has a headman, assisted by the Head of RT and RW Chair.

1. Potential Mapping of the area

This program is supported by the Regional Budget (APBD) of Semarang city, with a budget of approximately 200 million IDR per kampung. Additionnal funding is provided from Musrenbang.

In many aspects, the programme can also build synergies with other on-going programmes led in sub-districts, such as Women's Empowerment, Village Health Forum (FKK), LPMK Facilitation, PKK Facilitation, Development Planning Consultation (Musrenbang), Poverty Reduction Facilitation, that can support the implementation of Thematic Kampung.

One of the most successful outcomes of the Thematic Kampung Program as of today is Kampung Pelangi, in Randusari urban village, subdistrict of South Semarang. Originally a slum, the environment and landscape of the kampong gradually improved. In particular, it was embellished by the citizens themselves, which painted the walls thanks to a partnership with a painting business. Today, this colourful, rainbow-like kampong has become viral in social media, and became a new tourist destination, contributing to economic improvement for its citizens and the city of Semarang in general.

The philosophy of thematic Kampung programme is based on "Gotong-Royong" culture of collaboration: the government provides a stimulus in the form of concept and financing, and the community takes over.

The main obstacles encountered in the course of the project were the lack of awareness by communities regarding the potential of their respective kampungs. Some members of the community also tend to consider that government assistance through this projects only targets infrastructure upgrading, and does not improve sustainable local economic development as a whole.

The success of the project, especially for Kampung Pelangi, also boosted the tourism sector in Semarang City, and subsequently, local economic development. For Semarang City Government, this initiative can serve as a prototype for co-design and community empowerment, which can be replicated in other public policy sectors.

This project established culture as the backbone of sustainable development and urban rehabilitation, and introduced more collaboration and cooperation in the cultural sphere in Semarang. For tangible cultural activities, such as Batik handicrafts, it provided an opportunity to improve and better manage local infrastructure and facilities, procurement materials, etc.

The Thematic Kampung Program beautified the city’s environment, improved the quality of the settlements and infrastructure, and at the same time improved the local economy reduced the poverty rate, making the city more prosperous.

The reshaping of the environment trademarks positioned Semarang as an icon in the region, which had a positive impact on local residents’ behaviour, pride and concern about the quality of their environment.

Reporting and Evaluation of Thematic Kampung shall be implemented at the latest one month after the development work of the kampung is completed.
The feasbility of the Thematic Kampung projects is determined according to the following criteria:

A key success factor of the Thematic Kampung Program is communication between the government and public and private parties. Thanks to the "gotong-royong" culture, dialogues between stakeholders are productive, and not just fruitless dialogues and decisions are taken for the common good, and not for the group's sole interest. Another key factor is commitment to realizing what has been planned.

The program ended in 2018 and will be evaluated afterwards. Semarang City Government will continue to perform maintenance in existing Kampungs by providing assistance based on the evaluation conducted.

For instance, in the case of Kampung Pelangi, future development that followed the Kampung creation included a tourism path, a rest area, signage, the organisation of cultural events, the creation of an Awareness Group, the integration of the Kampung with the Flower Market and Kasmaran Park, etc.

Funds for future developments will be sought from APBD, CSR or private parties. It is expected that Corporate Social Responsibility actors will replicate Thematic Kampung in other sub-districts in other areas in Semarang City.

Semarang was a candidate for the third "UCLG Mexico City – Culture 21 International Award" (November 2017 – May 2018). The jury for the award drew up its final report in June of 2016, and requested that the Committee on Culture promote this project as one of the good practices to be implemented through Agenda 21 for culture and as a special mention of the Award. 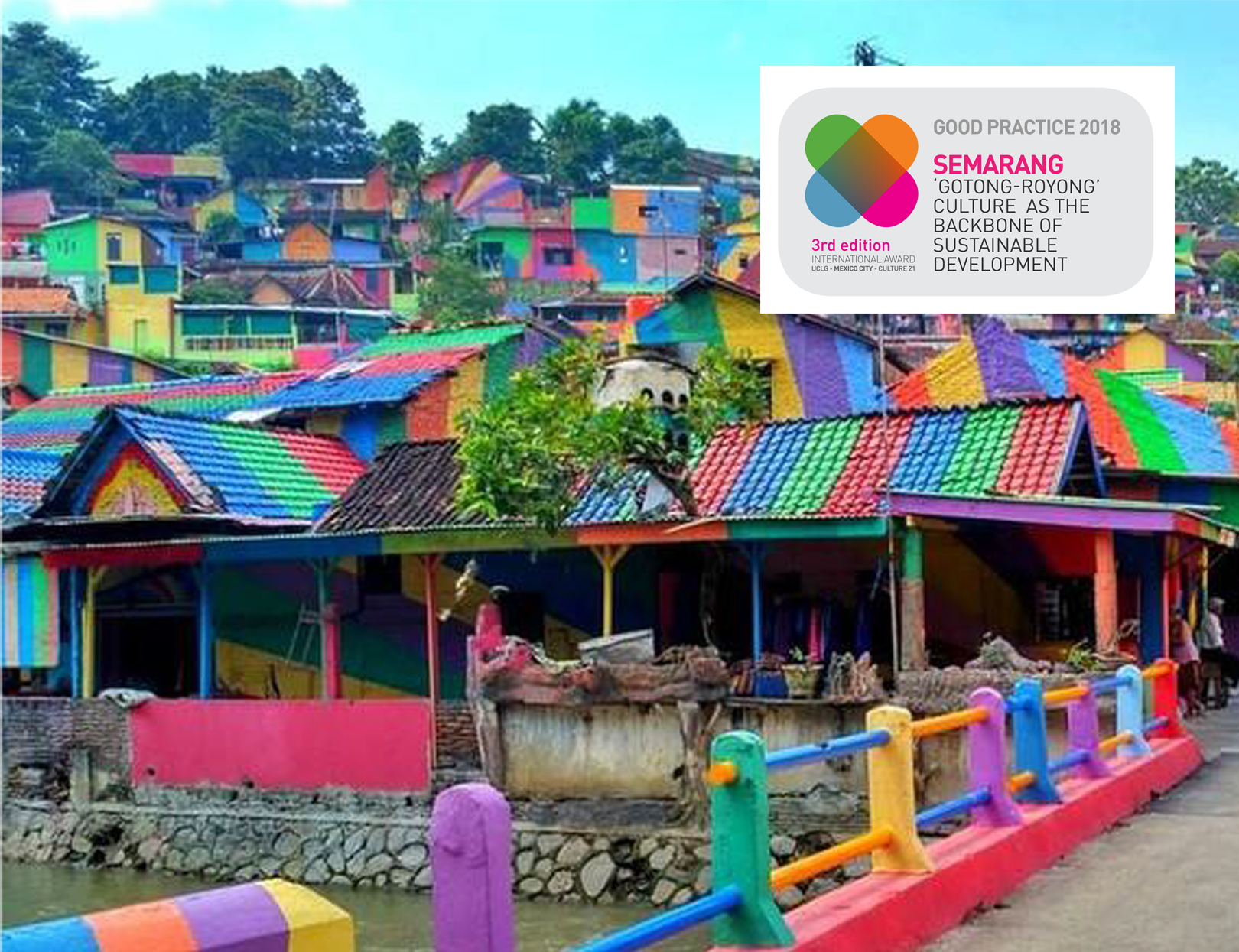