Ségou was the capital of the former Bambara Empire, and is at the heart of West Africa in the southwest of Mali on the River Niger. Today, it is a city of cultural excellence, with a growing number of initiatives such as the Niger Festival, the Kôrè Cultural Centre, the N'Domo Centre, Cerfitex, the Office du Niger, and the SMART Ségou association. According to the last General Population and Housing Census (RGPH) in 2009, it is home to 133,501 inhabitants, covering an area of 37km2, 240km to the northeast of Bamako. It is the 4th-largest region in Mali, whose regional capital is made up of 15 districts and a number of decentralised national services. The population is made up of the Bambara, Bozo, Bobo, Mandinka, Soninke, Fula, Sono, Minyanka, Dogon, Mossi, Songhai, and Samogo peoples. The three religions that are primarily practised here are Islam (80%), Christianity (10%), and Animism (10%).

The "Ségou: A Creative City" project was launched by the Municipal Council for Promoting the Local Economy, along with the Festival on the Niger Foundation and the Arterial Network.

The success of the Festival on the Niger and the local cultural possibilities have secured a place for Ségou on the worldwide cultural agenda, and has led to significant economic benefits. The city has also benefitted from artistic and cultural development which has been supported by various infrastructure and strategies. It was both essential and urgent to begin drafting a comprehensive and coherent cultural development policy, which places culture at the heart of that development through cultural industries. This included a qualitative approach to art, as well as a dynamic creative sector that supports the local economy and social development.

The programme seeks to combat the limited capacity of artists, cultural stakeholders, and community representatives. It will address the capacity-building necessary to meet the demands of national and international markets. It will also focus on the need for professionalisation and structuring in the sector, particularly given the lack of a framework or programme that emphasises the work of artists. Finally, the initiative will attempt to boost the local economy with a dynamic creative sector. In synergy with development policies and strategies, the programme has been designed and implemented by community and civil society stakeholders under public-private partnerships.

The goal of the project is to provide the city with both a programme and a policy for sustainable cultural development based on its cultural identity.

The project is in line with the regional territorial planning framework (STRAT). The central focus of this is "to transform Ségou into an attractive region based on its economic, cultural, and tourism assets, thus making it the economic capital". One of its key issues is the "economic development and preservation of tourism, crafts and cultural heritage ". The Festival on the Niger Foundation and its various initiatives (Festival on the Niger, the Kôrè Cultural Centre, the Kôrè Institute of Arts and Crafts [IKAM], the Kôrè studio, and the SMART Ségou association), are a strategy for cultural development. Despite those achievements, there is no comprehensive and coherent strategy or policy. As a result, there is urgent and relevant that the programme harmonise these areas, while taking into account new challenges and potential for local cultural development.

The programme shares the same vision of Agenda 21 for culture. The project devotes an entire development programme for the city to the culture, thereby forming a pillar for local development. Principles 7 and 9 of A21C are directly linked to the project with regard to the approaches to creativity, identity, and cultural diversity. The aim of the project is to promote artistic and cultural creativity through identities and cultural diversity. It will make it possible to draft and implement a cultural policy document, the Sustainable Cultural Development Programme. Furthermore, it will facilitate the consideration of culture within the local strategic economic development plan, and involve civil society as a key stakeholder in the programme.

The goal of the project is to provide the city with both a programme and a policy for sustainable cultural development based on its cultural identity, with the Sustainable Cultural Development Programme (PDCD). The specific goals of the project are:

The project required a number of stages. They included an information and programme-launching seminar for local and administrative authorities, as well as local stakeholders. Next, the project required documentation, the recruitment of a project coordinator, and the organisation of a workshop to identify local cultural identities. The workshop was held in order to draft cultural policy along with civil society and local elected representatives. "Ségou Art" was developed in partnership with the Kôrè Cultural Centre (CCK). Similarly, the "Ségou Weavers" project was established with the SMART association alongside key actors involved in woven crafts. It was also vital to implement a capacity-building programme for artists and cultural stakeholders with support by the Kôrè Institute of Arts and Crafts. Another stage involved carrying out three training projects. Finally, a vital element was supporting music development and emphasising the importance of local gastronomy.

It was essential to begin drafting a comprehensive and coherent cultural development policy, which places culture at the heart of that development.

Some obstacles that have stood in the way of implementing the project have been a lack of understanding of the potential of the cultural sector by elected officials and civil society, in addition to a lack of adequate documentation in this area. Other challenges included the mobilisation of funds, as well as the limited capacity of cultural stakeholders, elected representatives, and communities.

However, the quality of cultural expressions and the promotion of cultural identities have been emphasised and improved. Cultural diversity and social cohesion are also promoted through pilot projects. Culture is now one of the core focuses of sustainable development programmes with a coherent policy and genuine support for innovation, creativity, as well as cultural and artistic competitiveness. The local economy is supported by a dynamic creative sector with decent employment.

The aim of the project is to promote artistic and cultural creativity through identities and cultural diversity.

The programme's actions have had an impact upon education, training, and local economic development. It has made it possible to promote and emphasise the importance of cultural and artistic expressions, in addition to environmental and arts education for women and youth. Cultural entrepreneurship has become an instrument for social change.

A rigorous and transparent monitoring and management system, in addition to a final assessment, will highlight the strengths and weaknesses of the project while providing a financial and moral evaluation. There are plans to carry out monitoring, revision and communication activities for the programme, as well as to publish reports through periodic meetings between involved stakeholders. This process should be used to identify challenges and successes in the implementation of the programme. It should also be used to document, and write out the lessons learned to be able to share them at the local, national, and even international levels. Of the observations made, a number of "viable pilot projects" will need to be identified.

Involving all cultural actors, the municipality, and civil society in these processes is essential for maintaining ongoing initiatives. Developing and implementing the Sustainable Cultural Development Programme (PDCD) will allow the local government to continue the project. While Mali is already committed to sustainability, technical and financial support by the Festival on the Niger Foundation, along with its partners such as the Arterial Network, are a guarantee of continuity.

The City of Ségou was a candidate for the second International Award "UCLG – Mexico City – Culture 21" (January - May of 2016). The jury for the award drew up its final report in June of 2016, and requested that the Committee on Culture promote this project as one of the good practices to be implemented through Agenda 21 for culture.

This article was written by Bourama Diarra, Coordinator, Ségou, Mali 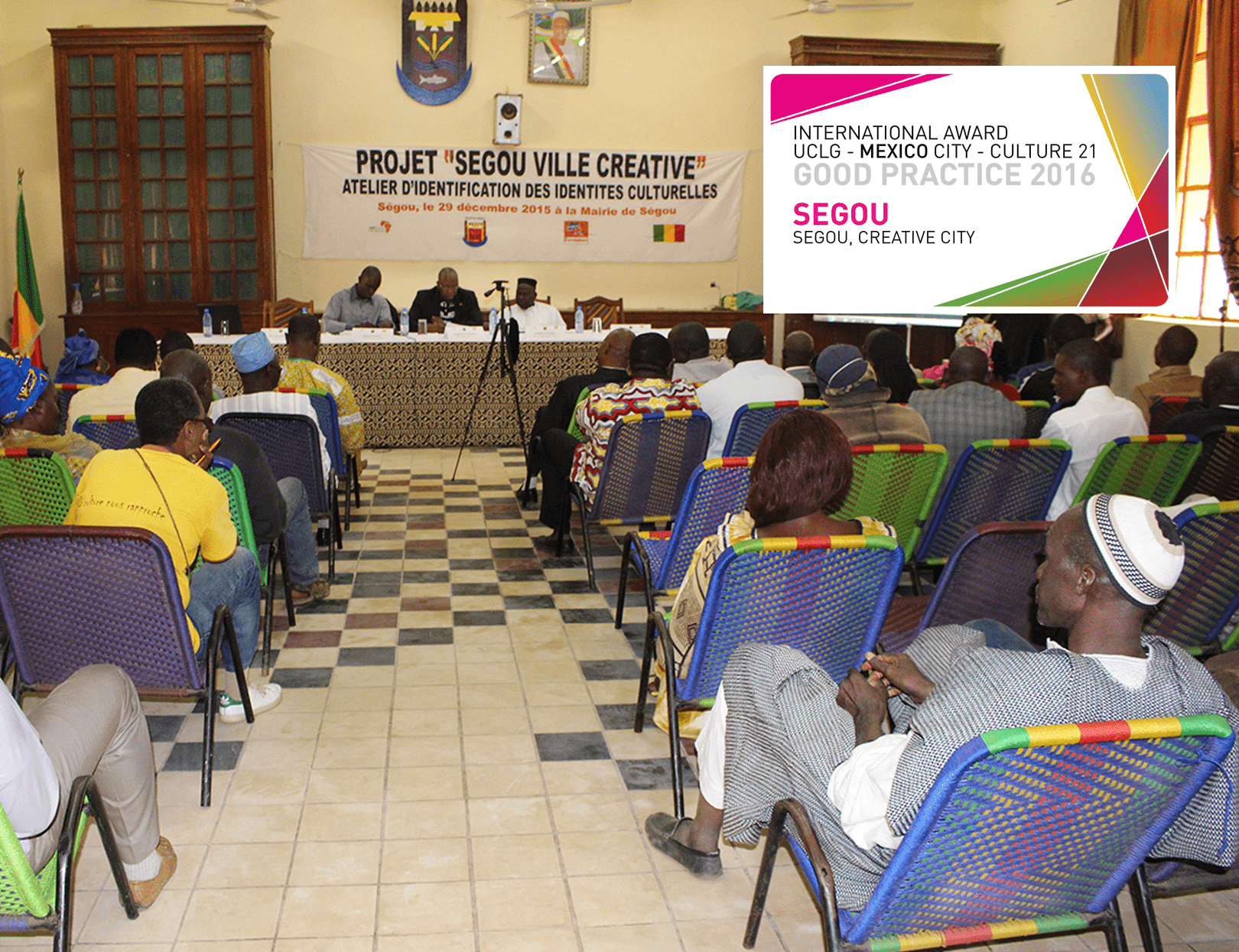