The architectural style of the historical houses in the city has possessed a high rank in Iran’s traditional architecture. Although many of these buildings have been destroyed during the last six decades, there are still many valuable and restorable units, approaching the improvement of cultural aspects of sustainable development of Kashan. Located in the historical core of Kashan, Mohtasham district an old district consisting of historical texture. Due to close proximity to bazaar and the existing valuable historical elements, it has got great importance. Following the growth of the city, most of the original habitants of the district have moved away. Its historical dimension is strongly influenced by the inclusion of historical places such as mansions, cisterns and archways. The existence of Mohtasham Kashani’s tomb in this district partly contributed to the selection of this region for the project. Mohtasham (1500-1588 AD) was the great poet of the Safavid period in composing ritual and religious poems. The restoration and rehabilitation of historical textures and archways not only causes the promotion of life quality in old districts, but also leads to the attraction of investors and subsequent tourism prosperity. While the preservation and revival of ancient civilization as well as introduction and transmission to the next generations, the implementation of this research- constructional Project prepares the context to share the valuable architectural elements of desert climate at national and international level.

THE PROJECT RESTORATION AND REHABILITATION OF THE HISTORICAL CONTEXT OF MOHTASHAM DISTRICT AIMS TO PRESERVE AND BEAUTIFY THE HISTORICAL TEXTURE ALONG WITH CREATING A TOURISM NETWORK INSIDE THIS AREA.

Kashan municipality is active in different areas and developed a plan in order to achieve sustainable development and increase public welfare. In order to fulfil these plans, it realised effective actions in tourism, economy and attracting investment to increase the level of public revenue. It also developed the commercial, residential and recreational areas. The project of restoration and rehabilitation of the historical context of Mohtasham district may be considered in relation to agenda 21 for culture in the following ways:

• Due to the existence of historical valuable elements, Mohtasham district is considered as a prominent tourism and cultural hub in Kashan.

• Applying a participative approach, the restoration of the area was carried out with cooperation of district habitant among which the following measures can be mentioned:

• The project has influenced the social vitality of people of district. For instance, the open area in the pathway, once in no use, is now used as car parking and a place for children to gather and play

• Aim to create the climatic comfort of the people in this place, the actions taken are as follow:

• In order for being applicable for all of the people (in terms of age, gender and people with disabilities), some measures has been taken in the district as follow:

THE RESTORATION AND REHABILITATION NOT ONLY PROMOTES LIFE QUALITY IN OLD DISTRICTS, BUT ALSO LEADS TO THE ATTRACTION OF INVESTORS AND TOURISM PROSPERITY.

The project of restoration and rehabilitation of the historical context of Mohtasham district aims to preserve and beautify the historical texture along with creating a tourism network inside this area.

The main actions taken in order for restoration and rehabilitation of Mohtasham district can be divided in 4 categories:

This project has been beneficial to habitant of district, Kashan citizens, local and foreign tourists, the university students in art and architecture majors, etc.

THE IMPLEMENTATION OF THIS PROJECT LEADS THE LOCAL GOVERN-MENT TO PRESERVE THE HISTORICAL TEXTURE AND ALLOCATE SPECIAL BUDGET TO THE HERITAGE OF THE CITY.

The implementation of this project leads the local government to preserve the historical texture and allocate special budget to the heritage of city.

The city of Kashan was a nominated candidate for the second 'UCLG International Award – Mexico City – Culture 21' (January-May 2016). The awards jury produced a final report in June 2016 and asked the UCLG Committee on Culture to promote this project as a practical example for the implementation of Agenda 21 for Culture.

This factsheet was put together by Mehdi Houshmandi Nejad, Director of Construction and Rehabilitation of Old Texture Association, Kashan, Islamic Republic of Iran. 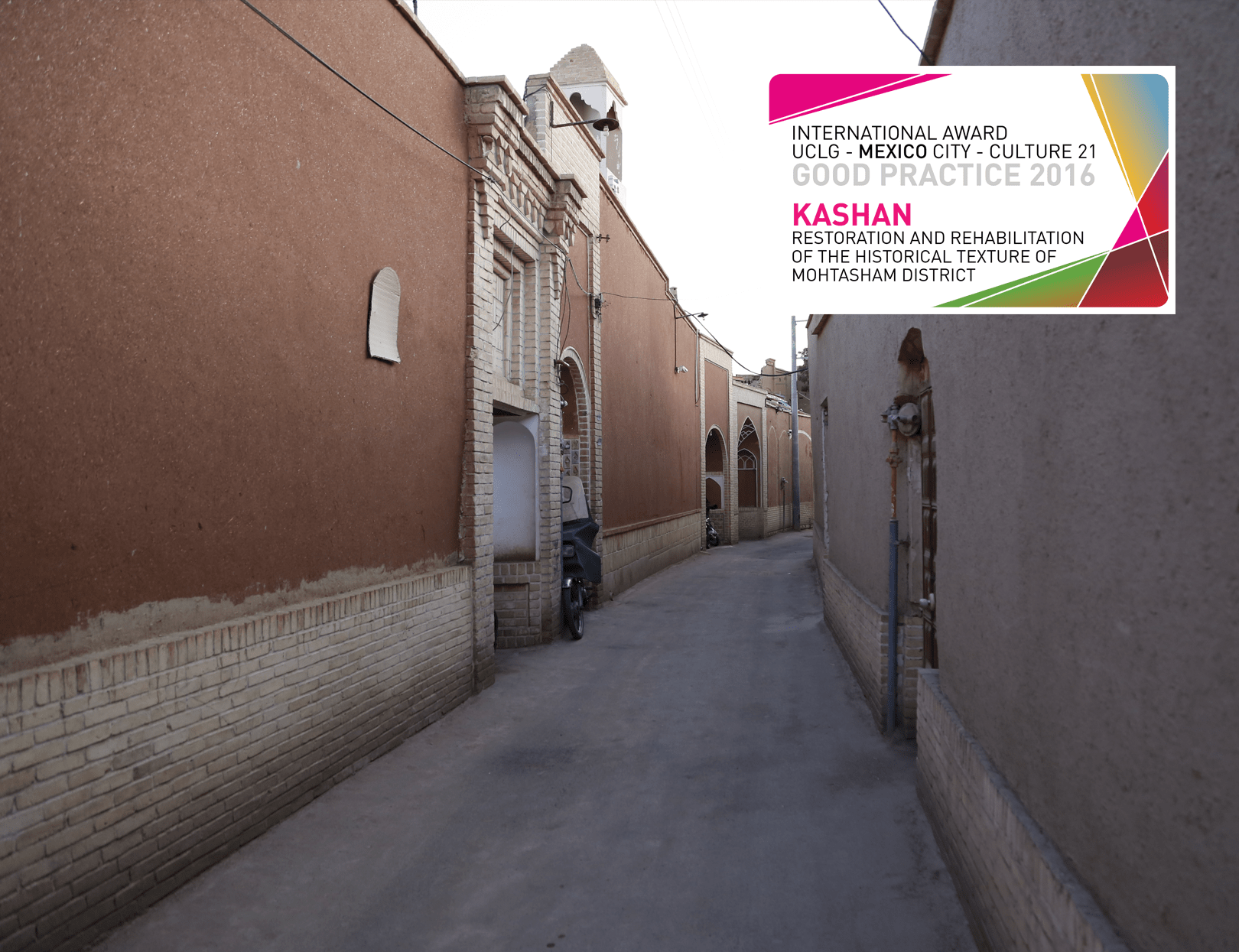