Bilbao's process is well-known and has been frequently used as a benchmark in international studies on urban policies. The city is the capital of the province of Bizkaia with a population of some 350,000 people, and about one million people living within the metropolitan area of "Greater Bilbao". Since the 1980s, it has led an "urban revolution". Thanks to this movement, the city has transformed from being based on the steel and shipbuilding industries into a city of services where culture is fundamental in the strategy to drive innovation, and promote sustainable economic and social development.
Under Bilbao's institutional leadership of the Regional Government of Bizkaia and the Basque Government, the transformation of the city not only helped to revive its competitiveness, but also emphasised the value and the refocusing of its productive and intellectual capital. As a result, cultural policy was identified as a fundamental instrument for the city's global development, alongside urban planning and sustainability. Today, thirty years after that first initiative, the city's cultural life is maintained by new activities, services, leisure, culture, and tourism.

The balance between a city and its culture requires a reorientation of policies in order to make culture one of the indispensable elements for a society, and thereby effectively implement processes of change. This means understanding institutional leadership as a mediation exercise for transformation that is only possible with the involvement and active participation of diverse citizens' groups. This subsequently requires a style of governance based on a society's own drive for development. However, the primary challenge is creating context and fertile environments where citizens can employ their creative forces to legitimise and build new cultural realities.
This has been the framework for steering cultural policies for the new Bilbao. Culture makes a city more cohesive by creating communities, enabling exchange, and establishing a viable way of life. Similarly, it improves urban planning, public space used for coexistence, mobility, the hospitality industry, urban ecology, and physical infrastructure as facilitators of creativity, symbolisms, new expressive forms, a productive framework, and cultural professions. Culture around the city; the city around culture. These are common themes that have defined the city's cultural policies for three decades.

The balance between a city and its culture requires a reorientation of policies in order to make culture one of the indispensable elements for a society, and thereby effectively implement processes of change.

2. A Story of Triumph

The history of performing arts in Bilbao throughout the twentieth century is made up of a continuous succession of corporate or business initiatives that led to the appearance or disappearance of different venues. At the height of its success in the 1980s, the city had 15 commercial spaces, many of which were theatres as well as screening rooms. During this time, Bilbao was a popular destination for touring companies, particularly in the summertime during the Aste Nagusia city festival which has become a democratic phenomenon of citizen participation since 1978. With the decline of the industrial and economic model combined with the gradual decline of film as a significant cultural cornerstone and source of mass entertainment, the end of the decade was marked by the very minimal use, or even closure, of most of the aforementioned facilities.

Furthermore, in 1983 tragic floods devastated Bilbao, claiming lives and destroying emblematic parts of the city including the medieval quarter and its Arriaga Theater.
However, this disaster sowed the seeds for regeneration. As a response, all of Bilbao subsequently began a movement of building towards the future, which  continues today. Today, it is difficult to analyse the history of the last thirty years and any activity in Bilbao outside of the context of its innovative beginnings in 1983. This is true for the commercial, industrial, hospitality, urban, citizen, or even cultural spheres.
The successes in each sector have mirrored that of the whole city. In designing the new Bilbao, culture was the driving force. Furthermore, the international impact of the Guggenheim Museum, and its cultural position in the city, have turned it into a symbol of renewal.

This was also reflected in the city's theatre community. Here, a new era began. Private initiatives which fuelled the performing arts industry throughout the twentieth century, were succeeded by public institutions and policies. These acted as initiators and drivers of innovative processes and environments, establishing contact with citizens' creative agents. Since then, the performing arts have been a primary sector for participation in the city. It is impossible to mention public determination to promote the performing arts without the specific  participation of the local creative agents themselves.
The theatre youth groups that evaded cultural persecution under the Franco dictatorship in the 1970s, such as Akelarre and Cómicos de la Legua, paved the way for a new generation rooted in social activism. This generation began to explore new artistic avenues and modes of production that the country's transition to democracy finally made possible.

Following this, a number of companies emerged that were dedicated to shaping the city's contemporary theatre scene. Karraka, Maskarada, Cobaya, Geroa, Markeline, Hortzmuga, and Gaitzerdi are just some of the groups committed to this goal. In turn new aesthetics, new dramaturgy, new brands, genres, and modes of production have been created to showcase Bilbao's brilliant theatre community. Today, the  scene boasts interesting production potential from theatre to street arts, or from research to reinterpretation of the classics. This includes productions for adults or families, both in Basque and Spanish, as well as with professional or amateur groups, utilising all the prospective diversity available in the performing arts community.

3. Thirty years of building the City and Performing Arts

Thirty years of gradual development in municipal policies have brought together the city and culture, with the performing arts at the centre. It is a mutually beneficial relationship that can be summed up in four stages:

– 2020: The economic dimension of Arts and Culture

With culture as a notable pillar of the city's development, the recent 2015-2019 government plan considers, among others, these strategic lines of action:

These strategic lines are activated in turn by four cross-cutting elements that define their action strategy:

Thirty years of gradual development in municipal policies have brought together the city and culture, with the performing arts at the centre.

4. The Current Climate for Performing Arts in Bilbao

As a result of this support for constructing favourable environments, today there is a rich tradition of the performing arts throughout the city. This is due to initiatives carried out by both public and private groups that work together at different levels. Despite varying degrees of interaction among these bodies, they have occasionally functioned as a network, participating in cultural events such as the performing arts at city festivals or other occasions.
As a whole, they cover the four main areas of stage production: training, creation, production, and performance. With regard to the first element, training, in 2015 the Dantzerti Basque Graduate School of Dance and the Dramatic Arts opened. The performing arts sector of Bilbao has invested heavily on this centre, which will undoubtedly begin a hopeful, innovative era for the theatre scene.
This group represents an increasing balance across different areas: the worldwide community, daily practice, the diversity of dramatic art forms, creation, proximity and community, and training. It is therefore capable of establishing connections between institutions, organisations, and the city's creative fabric to foster the development of productions.

Furthermore, in addition to the creative co-leading of this process, the Bilbao City Council has promoted the accessibility and enjoyment of the performing arts, the city's first administrative action which was done in line with the concept of a plural citizenship. This resulted in a number of programmes that promote amateur theatre, public promotion strategies such as "The Neighbourhood Box Office" or the successful "Arriaga Friends" club. All this took place in an ongoing effort to establish the best possible communication and expand the loyalty network.
Creating new infrastructure, renovating unused buildings now destined for socio-cultural and performance events, and expanding the Network of District Municipal Centres have been decisive actions taken to improve access to the performing arts, which continue to spread throughout the city.

All of this has allowed Bilbao to offer the diverse, vibrant performing arts scene it has today. It is possible to look back and see the path that has led the city to this point.
Due to its dynamic performing arts industry, with amateurs and professionals in both stage and street theatre, the city accounts for over 825 DIFFERENT SHOWS at around 1700 EVENTS enjoyed by some 647,000 AUDIENCE MEMBERS. These events star over 4200 ACTORS with varying professional skills and experience. This does not include technical experts or the subsequent economic activity.In addition, there are an estimated 600 STUDENTS who participate in a wide range of performing arts training activities, both public and private, from universities to occupational workshops.

Today there is a rich tradition of the performing arts throughout the city. This is due to initiatives carried out by both public and private groups that work together at different levels.

Today, the city is a cohesive environment which welcomes the diversity of a pluralistic society and an arts scene full of expressive forms and meanings. Its potential will continue to write new narratives of social development and cohesion.
It is time to establish new horizons. It is time to face new challenges for the performing arts community in Bilbao, within the overall context of major cultural changes. Undoubtedly, this will alter the current balance in the Bilbao scene and present new challenges, but it will also offer new and unexpected opportunities.
Thanks to the shared actions of all its stakeholders, Bilbao is in a great place to successfully take on new challenges and make the most of them. Together, the City Council and public institutions will help achieve this..

This fact sheet has been redacted by the Area of Culture of Bilbao City Council in January 2018.
Contact : cultura@bilbao.eus
Web : www.bilbao.eus 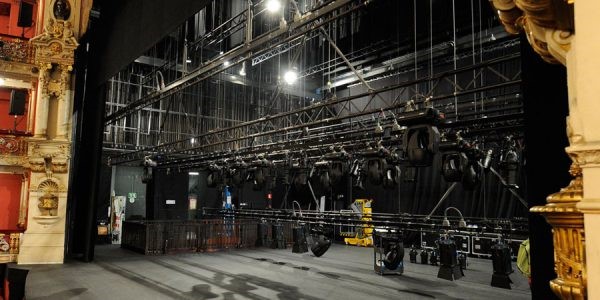