Throughout the 20th century, Paysandú was one of the few Departments that strongly embraced industrialization in Uruguay. It was a city with a complex socio-political network, a rich social fabric, a strong sense of history, and an ability to rethink its future, which made it possible to think about the keys to that future.

However, from the systematic national deindustrialisation that occurred under the country's dictatorship to the economic crisis of 2001-2002, the country changed. An integrated and robust middle class society was partially replaced by a dual society. On the one hand, some were proud of a history doomed to repeat itself, while others abandoned their identity. As a result, Paysandú continues to have its strengths and weaknesses. Its strength is its social capital, which fosters entrepreneurial spirit and associativism. Its most apparent weaknesses are ongoing historical issues that hinder development.

Over the last decade, through various social, cultural, and economic policies, significant efforts have been made to overcome existing limitations and promote sustainable development.

During the last scheduled meeting of congress under the Broad Front (Frente Amplio) coalition in 2008, it was noted that Uruguayan culture was emerging from a dire situation that had deepened over decades. This decline involved the abandonment of building facilities and a lack of support from various national government administrations in developing cultural policies. It was necessary to implement a series of cultural development strategies in all State actions.

The objective is to ensure the right for people to be considered creators and carriers of culture for their community, as well as the right to use and enjoy all cultural goods.

Cultural policy is led and overseen by the local government, together with civil society actors from the Department of Paysandú. The municipality plays a fundamental role in guaranteeing democratic representation and diversification, which generates the active participation of local actors through decision-making and access to culture. These new approaches to development require different forms of coordination based on regional governance, which promotes broad participation by society. The main challenge is guaranteeing cultural rights for the whole of society, which can be resolved by recognizing cultural diversity as a decisive factor in developing any socioeconomic project. Here, the local government promotes cultural policies within the framework of bolstering the region's creative industries.

Paysandú is undergoing a process of reconversion around the issue of culture, transforming the sector into one centred on creative industries that have an economic influence on the region. As a result, different traditional cultural expressions such as theatre, music, and dance are linked to the audiovisual sector, design, video games, and publishing.

The objective is to ensure the right to be considered a creator and a carrier of culture in society.

The inherent principles of Agenda 21 for culture and the cultural policy of the Paysandú Department help align the government's specific objectives with the UN's SDGs. The overall goal is to address sustainability by mainstreaming the actions of each pillar of sustainable development.

Developing different cultural heritages has been made a priority to foster cultural diversity and intercultural dialogue. This has occurred alongside the promotion of artistic and cultural exchange on a national level, as well as regional integration, particularly along the Uruguayan-Argentine coast. There has also been a focus on human rights and participatory democracy by facilitating people's access to cultural products and goods, as well as by training artists and producing cultural goods.

Paysandú's cultural policy is designed mainly to contribute to social equity by promoting local cultural goods and services that help reduce inequality throughout the territory (SDG-10).

Additionally, the cultural sphere is a key part of achieving Goal 11. The policy of Paysandú's current government has been to emphasize the restoration of tangible and intangible cultural heritage, thus repositioning symbolic capital in order to redefine local identity.

Promoting the local production of cultural goods and services has a direct impact on the economic development of the city. It is also linked to cultural tourism and the potential to foster artistic endeavours and create opportunities for people in the sector. Local cultural policy has helped strengthen partnerships with civil society organizations, cultural groups, and institutions or companies striving to broaden the supply of cultural activities and initiatives. Such a comprehensive approach has therefore generated economic activity.

Paysandú has positioned itself as a cultural development hub, using high impact strategies that reflect a steady process.

The restoration and preservation of tangible and intangible heritage has been promoted from a perspective based on public participation.

Finally, Paysandú's brand is being developed in order to establish the Department as a place focused on cultural identity and productive development. This process was carried out with citizens through consultations, forums, and collective works whose aim was to bring together shared ideas.

This cultural policy along with the revitalization of cultural events, the incorporation of innovative activities, and the recovery of heritage are notable highlights, including the following:

The project has led to changes in perspective for both local government policy makers and local actors. It has promoted a shift in habits, democracy, and the democratization of cultural rights. The main challenge has been to change the logic of continuing demand, which should be placed on local government rather than simply local actors. Indeed, it must involve the collective creation of proposals and multilevel governance. In seeking a steady process, the goal is to turn Paysandú into national hub for cultural development that benefits all citizens.

Since 2015, Paysandú has seen the consolidation of events and activities, significant increase in participation and production, growth of local, national and international exchanges, decentralization of production, and cultural events planning based on local demand.

Up until this point, evaluation has simply been quantitative, and its framework is being evaluated. The quantity and quality of actions have been assessed based on records, and on citizen participation in activities, through credentials and attendance lists.

These lists provide information on the number of participants and also on more specific information for each participant, offering a better profile of attendees. This makes it possible to evaluate the policy and monitor its implementation.

These lists provide information on the number of participants and more specific information for each participant, offering a better profile. This makes it possible to evaluate the different phases of implementing this policy.

Strategic planning for the strengthening of culture, and the use of dialogue with society and different sectors for their empowerment

Recognize cultural diversity and artistic groups formerly excluded from policies, and generate social capital for those with little access to cultural institutions

The successful continuation of the project will depend on emphasizing the value of cultural, artistic, and tourism activity, expanding its influence across all initiatives, and promoting citizen participation as a means for the use and enjoyment of culture. In addition, networking with groups, civil society organizations, companies, and institutions will strengthen ongoing activities that promote culture. The reassessment of the role of municipal officials is essential for establishing new strategic guidelines, empowering them in cultural activities and proposals, as well as for consolidating human capital.

To guarantee this, it is necessary to improve the levels of training, income, and access to cultural and educational goods and services, which are all part of a long-term process.

Paysandú was a candidate for the third "UCLG Mexico City – Culture 21 International Award" (November 2017 - May of 2018). The jury for the award drew up its final report in June of 2016, and requested that the UCLG Committee on Culture promote this project as one of the good practices to be included under Agenda 21 for culture. 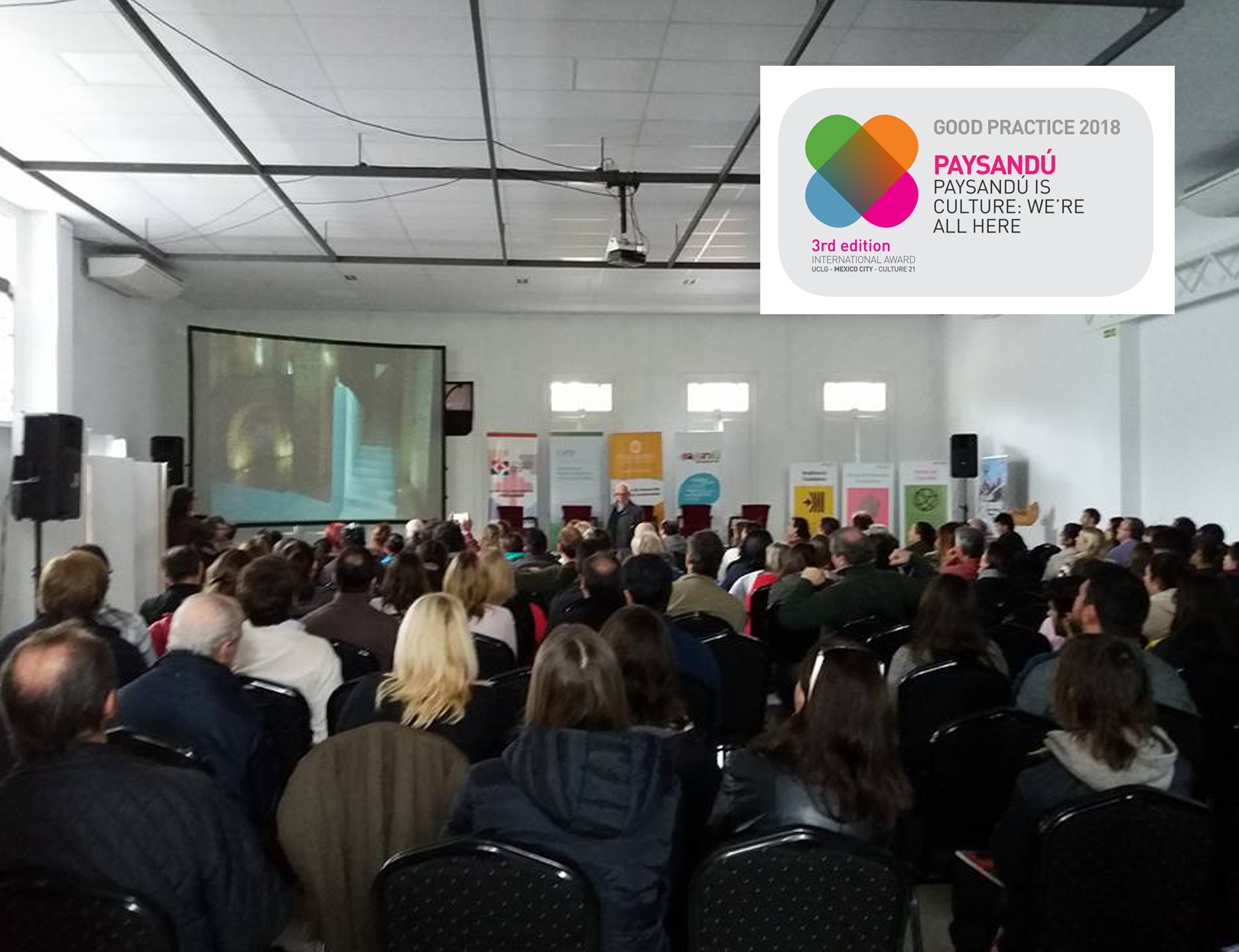