Nilüfer, the house of the exchange of populations

The Municipality of Nilüfer was founded in 1987 as one of the three municipal administrations constituting the Metropolitan Municipality of Bursa. It is a recently developed urban residential area located in the West of the Bursa plain in North-Western Turkey.

A considerable part of the district’s population is of refugee-migrant Balkan origin, having settled in Turkey during the last quarter of the 19th century and after the 1923 Exchange of Populations between Greece and Turkey. The region has been accommodating internal migrants from all-over Turkey since the 1960’s. Urban network has undergone a mostly planned development, with a noteworthy presence of green spaces, while the construction of an extended network of social and technical infrastructures supports the municipality’s vision for a modern, participative and tolerant way of life.

The ardent desire of second generation immigrants of 1923-1924 to make live the memory of their parents, forced migration and their homelands in Greece, as well as their interest in the traditional economy and material culture of their community until the 1970’s has been the moving force for the implementation of the project. Therefore focused on the population of neighbouring settlements of local or migrant origin, the inhabitants of Nilüfer, Turks, Greeks and foreign visitors. Simultaneously, a desire has been expressed for the formation of a permanent hub making easier the systematization of visits, exchanges and common activities among associations of migrants in Turkey and Greece. Non-governmental organizations such as local associations founded among the inhabitants of the old rural settlements of Nilüfer are an important agent in applying (and also planning) the cultural policy of the municipality. Preservation of cultural heritage, especially as far as traditional architecture and folk culture are concerned, is one of the pillars of the municipality’s policy on culture

THE AIM OF THE PROJECT IS PROVIDING SPACE FOR EXPRESSION TO THE RURAL, AND OF MIGRANT ORIGIN, POPULATION OF NILÜFER, WITH ITS DISTINCT CULTURAL CHARACTERISTICS.

The presence of both urban and rural spaces and populations within the region as well as the variety of cultural identities emanating from migration constitute a cultural mosaic and are reflected on the cultural policies. The local government seeks to preserve and provide infrastructures for their expression, as well as the foundations for the efflorescence of modern urban culture, reflecting the ideals of personal freedom and individual expression as well as of participation in ideological, political and artistic movements. In this context it organises or hosts concerts, film and theatre festivals and plays, art exhibitions, lectures and colloquia, etc. It also aims at promoting research and knowledge on subjects such as forced migration, local history and folk culture, which can be shared among local citizens, students and researchers. Preservation of cultural heritage, diversity, creativity and knowledge are aimed by participation, inclusion and democratic dialogue. Apart from an equilibrium in the relation between economy and environment, as well as a relation based on democracy and participation, the creation of a suitable environment for the development and expression of culture is fundamental for achieving local sustainable development.

The House of the Exchange of Populations is foremost an institution for the preservation of memory and cultural heritage founded upon the principles of co-operation among local associations and the municipality. It aims at providing space for expression to the rural, and of migrant origin, population of Nilüfer, with its distinct cultural characteristics. In this way, it serves as an agent for preserving and guaranteeing cultural diversity, promoting at the same time the opening of local culture and history to broader publics within and beyond the district.

The specific goals of the project consisted of:

The project was developed in collaboration with the Society for Culture and Solidarity of the Lausanne Treaty Exchanged Population of Bursa and, unofficially, with the Women’s Society of Solidarity, Improvement and Culture of Görükle. The role of both associations in the compilation of the folk culture collection of the museum was fundamental, since they acted either as intermediaries for the donation of objects to the museum from the part of local families, or they donated the collections they had themselves compiled.

The population which was directly involved in the design and implementation of the project and which also benefited directly from it were all its inhabitants, and particularly the members of the two above mentioned local NGOs.

THE MUSEUM SERVES AS AN AGENT FOR PRESERVING AND GUARANTEEING CULTURAL DIVERSITY, PROMOTING AT THE SAME TIME THE OPENING OF LOCAL CULTURE TO A BROADER PUBLIC

The House of the Exchange of Populations is the first museum founded by the municipality of Nilüfer, therefore it is a first attempt to produce a work combining historical and anthropological research, architectural planning, technical infrastructure and museological methodology. Consequently, an important gain has been acquired in terms of experience. Additionally, through its foundation, a point of reference for the study of history, folk culture and migrant identity was formed within Nilüfer, through which the cultural policy of the municipality may be promoted in a more tangible and assertive way in the directions of the protection of cultural heritage and the promotion of cultural diversity and knowledge by way of democratic participation and inclusion of distinct groups.

The overall population of Nilüfer has benefited from the foundation of the House of the Exchange of Populations since in this way they become partakers of the cultural identity of a specific group. They can apprehend the value of diversity and differentiation within their society. Also, they are able to contemplate on issues such as memory, identity, local culture, national boundaries, human and cultural rights, as well as on their importance for the development of their region.

Cultural diversity and the coexistence of an urban community together with dispersed rural or formerly rural ones has been truly enhanced. This constitutes an environmental, economic and social framework that needs a cultural and artistic expression. The House of the Exchange of Populations in Görükle may be considered as one permanent transmitter. It is also hoped that an impetus may have been given to other communities, NGOs and individuals for the expression of their own cultural identity. Finally, it is wished that the agency of the two NGOs which participated actively in the foundation, will be imitated by other associations, especially among the women’s associations of Nilüfer, in terms of its dynamic, creative, cooperative and entrepreneurial character.

IT IS HOPED THAT THE PROJECT WILL BE IMITATED BY OTHER ASSOCIATIONS IN TERMS OF ITS DYNAMIC, CREATIVE, COOPERATIVE AND ENTREPRENEURIAL CHARACTER.

The city of Nilüfer was a nominated candidate for the second International Award ‘UCLG - Mexico City - Culture 21' (January-May 2016). The awards jury produced a final report in June 2016 and asked the UCLG Committee on Culture to promote this project as a good practice for the implementation of Agenda 21 for Culture.

This factsheet was put together by Eirini Kalogeropoulou Yalçın, History and Tourism Bureau Assistant, Nilüfer, Turkey. 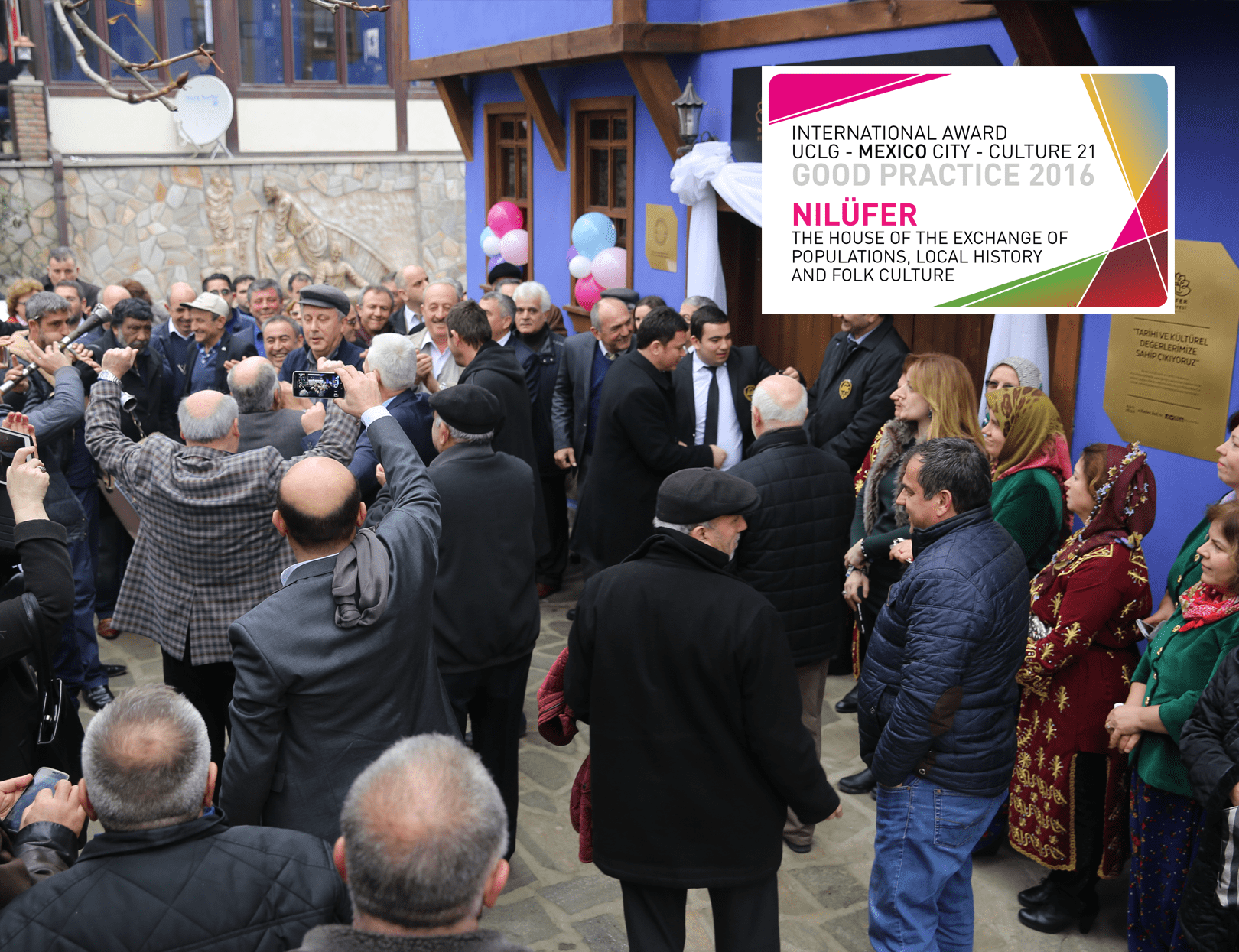