Congonhas is located 78 km from Belo Horizonte, the capital of the state of Minas Gerais. The first inhabitants arrived in the region in the early years of the 18th century. Here were some of the first gold mines explored in Brazil. The place soon emerged as an important colonial mining center. With the decline of gold, iron ore mining became one of its main activities and, in the early 19th century, the first steel center of the country established in the city. Today the main mining industries in Brazil have headquarters in the city. Until the 1940s, the city maintained almost unchanged its original feature. Since 1960, increasing mining activities have been causing to the urban life pollution, a population increase and the loss of its identity.

However, Congonhas managed to preserve one of the greatest Baroque treasures of Brazil: the Sanctuary of the Good Jesus of Matosinhos, with its 12 prophets carved in soapstone and 66 natural-sized sculptures carve in wood, representing the final scenes in Christ’s life, declared by the United Nations in 1985, as a World Heritage. The city attracts domestic and foreign tourists. Meanwhile, before the opening of the Museum, the short supply of information and comfort conditions made visitors stays in the city very short. Today the situation is changing, as the museum is a rare example of Brazilian project that brings together the various spheres of preservation of cultural heritage.

As the municipality sees its economy threatened by the end of iron reserves, a creative economy of culture emerges as one of the main means of survival for population.

Designed to be a link between the population and the preservation of the cultural heritage of the city, the museum of Congonhas has emerged as a space for recovery, preservation and understanding of the Sanctuary. Its actions ranges from expository programs, heritage education, cultural actions and the performance of a Baroque Study Reference Center, focused on research on art and popular faith. As an old aspiration of the local people, the Museum has been a landmark, not only for the preservation of the local cultural heritage, but also to its qualification as a tourist destination.

The initiative has numerous links with the reflections and the content broadcast by Agenda 21 for Culture, as their actions suggest ways to strengthen its activities with the relationship between culture, democracy, citizenship, coexistence, participation and creativity. The Agenda 21 for Culture proposes to strengthen and renew local cultural policies by encouraging governments and international institutions on the importance of culture in local developmenT.

The project of the Museum of Congonhas aims at preserving, disseminating and promoting the historic site of the Good Jesus of Matosinhos. As the municipality sees its economy threatened by the end of iron reserves, a creative economy of culture emerges as one of the main means of survival for the population. The Museum intends to be the main catalyst of this transformation process.

The project matured for over ten years and the principles that guide its executions, as well as the educational and other programs of activities, depart from the recognition of the plurality of meanings of the historic site of this mining town and its social practices.

The museum, housed in a building of 10,000m2, has a showroom, a technical reserve, a library, an auditorium, a studio, an education space, a cafeteria, an outdoor amphitheater and administrative areas. However, its actions go far beyond the physical space. It radiates its activities to the communities in the surroundings, in an intrinsic dialogue with local traditions and artistic local events.

The museum acts as a kind of mediation between the museum scene and the public. The aim of the institution is to qualify the irreplaceable experience of being in the place, enhancing senses and perception, either through descriptions, interpretations or creating favorable conditions to fruition.

The Museum of Congonhas has been successful only because it has been able to congregate entities in all spheres of government, UNESCO, the National Historical and Artistic Heritage Institute of the Ministry of Culture, the Government of the State of Minas Gerais and the Municipality of the city of Congonhas, primarily responsible for the initiative. The project is one of the rare examples of successful synergy of government in all spheres. Several actions were only possible thanks to these forces joined together.

The Museum of Congonhas produced in the last five years, through actions coordinated by UNESCO in Brazil, new knowledge for the conservation of monuments in stone, especially on the production of digital copies of the sculptures, in addition to updating the production technique of physical copies. The institution aims, throughout its existence, at consolidating and disseminating such knowledge, in addition to the use of templates for monitoring actions.

By expanding its activities to various sectors of the community, the museum aims to promote the local artistic production and still generate a production chain of knowledge that are to be taken to the local schools. By promoting the encounter between tradition and modernity, the museum of Congonhas has cared for the vocations of the people of Congonhas, bringing benefits to citizens, tourists and scholars.

The aim of the institutions is to qualify the irreplaceable experience of being in the place, enhancing senses and perception, creating favorable conditions to fruition.

The local government has developed several actions in order to involve the community and promote the religious heritage of the city. The project enabled Congonhas to be the first Brazilian city to participate on the VIRTUAL ERA project, which implies on a visit to the historic site and its surroundings virtually. By implementing, in partnership with UNESCO, tourist signs of world standard, Congonhas has become the first of the 19 World Heritage sites in Brazil, to implement this signaling model.

The Museum has promoted broad access to its activities, ensured social inclusion and cultural diversity. As a way of democratizing access to culture, the Museum is free on Wednesdays, from 1pm to 9pm., and has held several cultural events, which give opportunity of participation to local cultural agents.

The greatest impact of the museum has to do with the rescue of the feeling of belonging to the historic site of the Sanctuary. The museum intends to enhance the understanding and interpretation of this historic site and its religious, devotional, tangible and intangible manifestations.

The museum has promoted broad access to its activities, ensured social inclusion and cultural diversity.

The Museum fosters the local tourist industry, with an increase in tourist flow, which triggers an economic process of income generation in various sectors, hotels, restaurants, transportation, service providers and trade. The increase of the production chain, with the increase in tourism, generates a broad social development, providing the population greater access to goods and services, enhancing professional training, the level of education, access to basic substructure and health. The Reference Center, which aims at studying the effects of weather and other environmental aggressors on the sculptures of the prophets, promotes an environmental bias, broadening the discussion on the preservation of the environment in Congonhas, as well as the impacts of mining in the region.

The actions pass through several evaluations monitored by UNESCO, IPHAN and the Ministry of Culture, as well as by the municipal public administration of Congonhas. The cultural actions developed by the Museum, also generate a constant monitoring and promote researches on public satisfaction, which enables us to make eventual corrections of those activities. The museum has had a great public acceptance, and that has guaranteed the success of its activities. Finally, we firmly believe that the International Reward CGLU – Mexico City – Culture 21, may contribute greatly to divulge its actions internationally.

The city of Congonhas was a nominated candidate for the second 'UCLG International Award - Mexico City - Culture 21' (January-May 2016). The awards jury produced a final report in June 2016 and asked the UCLG Committee on Culture to promote this project as a practical example for the

implementation of Agenda 21 for Culture.

This factsheet was put together by Sérgio Rodrigo Reis, President of FUMCULT, Minas Gerais, Brazil. 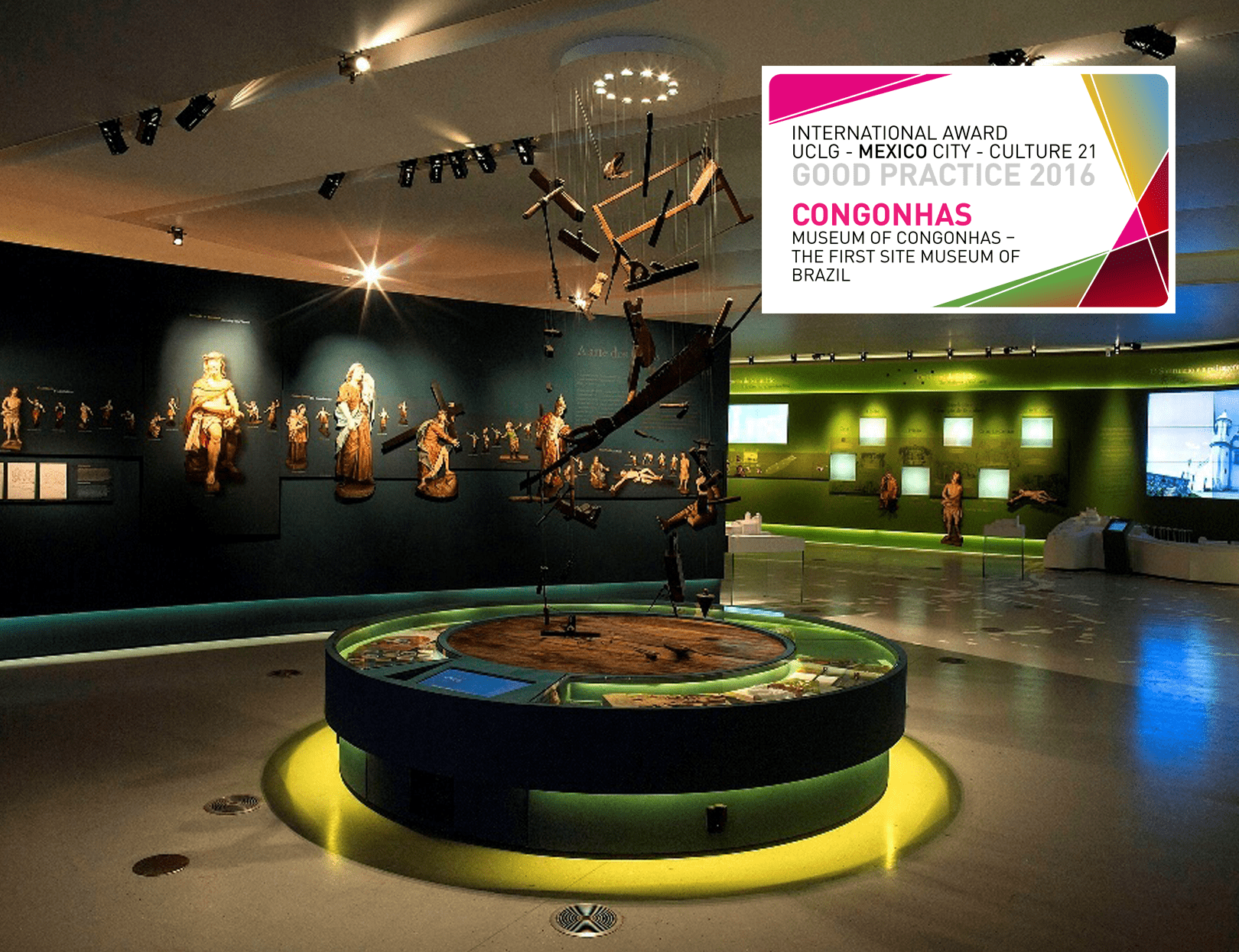