The City of Montreal is renowned worldwide for its effervescent cultural environment, universities, creative industries, and for its status as a designated UNESCO City of Design. Montreal is the capital of coexistence, and a cultural and cosmopolitan metropolis. Its cultural life attracts skills and tourists from all over the world, making the province more vibrant as a result. It has a network of municipal cultural facilities and 45 libraries deeply rooted in each neighbourhood, offering all Montrealers free access to reading, knowledge, culture, and leisure.

Montreal has been a member of UCLG since 2004 and served as vice-president of the Committee on Culture from 2010 to 2015. The city was a pioneer in adhering to Agenda 21 for culture because of a unanimous resolution passed by the City Council in June of 2005. Today, the tradition of following Agenda 21 continues to steer the city in the development and implementation of its public policies. In June of 2017, the City of Montreal adopted the new 2017-2022 Cultural Development Policy, entitled “Combining Creativity and Civic Cultural Experience in the Digital Age and the Era of Diversity,” in which libraries play a decisive role.

"Libraries are great tools for cultural democratization, as well as for fostering the spread of knowledge, literacy, social cohesion, and development."
(Cultural Development Policy)

The Renovation, Expansion, and Construction Programme (RAC) was created following a 2005 analysis of the Montreal Public Libraries Network, which identified a number of weaknesses. Most libraries were below average compared to other geographically-large Canadian cities, and great disparities existed throughout the network and supply of such services.

As a result of this exercise, an ambitious Montreal Public Libraries Network Consolidation Plan was adopted from 2007-2017. It undertook a large-scale challenge to improve opening hours, collections, activities, and technologies.

The Renovation, Expansion, and Construction Programme is the real-estate and property component of this action plan, whose particular focus was to offer more, improved services and to better serve areas without community libraries. Since 2008, four new libraries have been built and another 10 were planned between 2016 and 2019.

The 2016-2019 Strategic Libraries Plan was subsequently adopted as the result of these commitments, in order to support the RAC Programme. In fact, 10 new libraries will be designed over the next few years, many of which will offer mixed facilities that combine library, cultural, and/or community spaces.

The main goal of the RAC Programme is to increase and improve access to libraries for populations that lack them by building libraries in those areas. Simultaneously, the project re-imagines these facilities in order to make them more sustainable and more inclusive, while also offering citizens innovative services that meet their needs.

The RAC Programme was implemented in 2008 to improve Montreal’s library network by building new facilities or renovating existing ones. The new libraries combine multiple services under one roof with traditional access to books as well as new spaces devoted to digital literacy, skills development, and experimentation (Fablab), socializing spaces (cafe), and activities or mediation.

Under this program, a 21st century library is now more than just a place to access information. It is a social project, and a “third place” for people to live within society, where the first and second are home and work or school, respectively. By positioning itself as a third place for people to inhabit, the neighbourhood library goes beyond its traditional function and becomes a welcoming space, as well as a place for study, relaxation, entertainment, and exchange. As a welcoming and inspiring place that is open to everyone, the neighbourhood library is a beacon in the community.

In addition, the first four libraries built since the beginning of the programme were each part of an architecture competition organized in collaboration with the Montreal Design Office. They all showcase pieces by Quebec artists who were also selected at the end of this competition.

This programme also has a sustainable and inclusive development component, requiring all buildings to be certified, fully accessible, and a strong place for citizen participation in the process of designing new facilities. Working groups have been formed that consist of librarians, architects, urban planners, cultural stakeholders, visitors, and non-visitors. This participatory approach makes it possible to understand the needs, expectations, and aspirations of visitors in order to better integrate them into library planning. In addition, a free subscription is offered to all Montrealers, allowing more people to benefit from the initiative.

The budget for the first four libraries amounted to nearly CAD $72 million. All the libraries produced under the RAC Programme are funded by the City of Montreal and the Quebec Ministry of Culture and Communications (MCC) under the Montreal Cultural Development Agreement. The project also includes the following partners:

This programme has also established a high level of expertise in the library sector. The librarians, architects, and urban planners involved have developed an in-depth understanding of the major challenges facing libraries in the 21st century, including new forms of learning, creating a welcoming place for all, accessibility to reading and cultural media, citizen meetings for newcomers, digital literacy, Francization, and more.

The RAC process has endorsed co-design and citizen participation in large urban projects across the city. Through the use of architectural competitions for building each facility, the libraries were recognized for their quality. Indeed, several have even been awarded:

Although they represent only 11% of the total number of libraries in Montreal, the 4 new libraries built under the RAC programme have a significant influence accounting for 20% of the total visit and 18% of the total loans of the entire network.

Hundreds of thousands of inhabitants have experienced improvements in their proximity to knowledge, culture, and new technologies. In 2017, the 1.6 million visitors, and the record number of 2.2 million books borrowed in the four new libraries exceeded all expectations.

Polls have shown that the quality of the spaces designed, the development of a “third place”, and the massive improvement of digital access have all contributed to improving visitors’ experiences, transforming the traditional perceptions of the library, and encouraging visitors to stay longer (56 minutes on average) while also diversifying their activities, such as working on site, participating in activities, consulting, and more.

Over the last 10 years, the RAC Programme has been continuously improved through ongoing assessments. In 2013, a mid-term review led to the adjustment of many organizational aspects of the programme, such as funding standards and systematization of the LEED requirement. On a daily basis, scorecards are used to monitor and document the development of each project, such as progress, schedule, monitoring of expenses incurred, and more.

Each project is overseen according to the management methods of real estate projects by the City of Montreal. Projects are systematically evaluated after being launched on maintaining a schedule, time frame, budget, and communications plan. Finally, the RAC Programme is also evaluated annually as part of the Montreal Libraries Strategic Development Plan.

The team dedicated to the RAC project is constantly working to streamiline library standards by incorporating the best practices over the years.

The RAC process has recently been revised with the goal of incorporating Cultural Centres as places for outreach within libraries, thereby creating mixed cultural facilities. Up until 2019, 10 projects were in progress and the programme is to be extended until at least 2027 to meet the initial goals.

The City of Montreal was a candidate for the third “UCLG Mexico City – Culture 21 International Award” (November 2017-May 2018). The jury for the award drew up its final report in June of 2018, and requested that the UCLG Committee on Culture promote this project as one of the good practices implemented under Agenda 21 for culture, warranting special mention for the third awarding of the Prize.

This article was written by Suzanne Laverdière, Director of the Department of Culture, Montreal, Quebec, Canada. 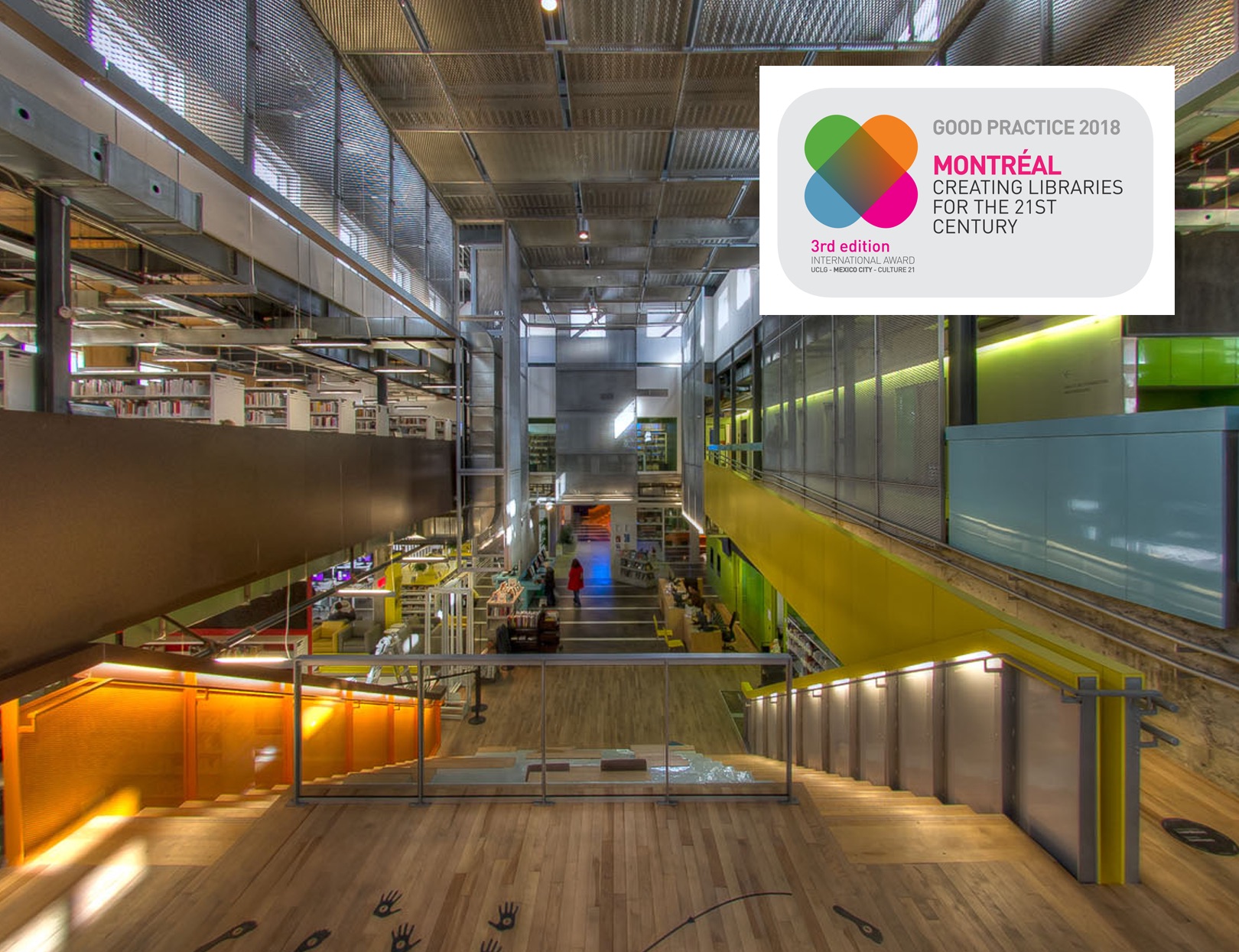