Manchester is the UK’s fifth city and one of 10 authorities which make up the Greater Manchester city region. It is a multicultural city with a rapidly growing population, predicted to exceed 600,000 by 2021. Whilst the city has undergone a huge transformation since the 1980s, its culture and values are firmly rooted in its history as the world’s first industrial city. Culture is at the heart of Manchester’s identity. A wide range of cultural partners provide a well-rounded internationally significant oer. The cultural, creative and digital sector is the city’s second fastestgrowing sector. The city’s Cultural Ambition Strategy 2016-2026 outlines the sector’s commitment to be a thriving, sustainable, equitable city.

The city's cultural community has been working together through the Manchester Arts Sustainability Team (MAST) to understand its climate change impacts and to share and mobilise climate action.

Today MAST brings together 50 arts and cultural organisations across Manchester and Greater Manchester. It is a member of the Manchester Climate Change Partnership which, together with the Manchester Climate Change Agency, champions climate action in the city. MAST is developing a zero carbon culture action plan in line with the city’s zero carbon 2038 target. In this context MAST, the city’s Cultural Leaders Group and the city council’s policy and culture teams are developing closer collaboration.

The aim of Manchester’s cultural collaboration on climate is to share, develop and mobilise climate action, both within the sector (through its audiences and communities) and beyond. It does this through the individual actions of its members, through collective action and through working in collaboration with public, private and third sector organisations in the city, the UK and Europe.

The aim of manchester's cultural collaboration on climate is to share, develop and mobilise climate action, both within the sector (through its audiences and communities) and beyond.

The first meeting in March 2011 brought together 20 organisations, representing a broad range of cultural activity in the city, and the city council. The initial objectives of the group were:

MAST now has 50 members across six of the 10 local authorities which make up Greater Manchester. The group works on a range of topics from green procurement and sustainable travel to green spaces and sustainable materials. Examples of MAST initiatives both within the group and beyond include:

In 2018, Manchester City Council began leading the Urbact C-Change Transfer Network, working with MAST and Julie’s Bicycle to support five European cities to establish a similar model of cultural collaboration on climate and to identify opportunities for strengthening Manchester’s approach. MAST also became a member of the Manchester Climate Change Partnership to oversee and champion climate action together with the Climate Change Agency.

As MAST became more independent, taken on by individuals with more operational roles, it had limited interaction with cultural leaders and policy-makers. As a result of C-Change and the zero carbon 2038 target, it is now reconnecting with cultural leaders and the city council. As a result of the work of its new Zero Carbon Co-ordination Group, the council is now exploring how to embed zero carbon in cultural funding, a process involving sector consultation.

MAST has not only brought benefits in terms of climate action but also in strengthening broader sector collaboration and raising the profile of the group and its members. Members have also reaped organisational benefits, from improved team morale to cost-savings, reputational benefits and new creative opportunities.

MAST has not only brought benefits in terms of climate action but also in strengthening broader sector collaboration and raising the profile of the group and its members.

MAST members undertake a range of measures to engage with their employees, volunteers, artists, audiences and local communities. MAST supported 2016’s Climate Lab, an experimental programme run by the Climate Change Agency, to test ways of engaging people in developing climate change strategy. One of the highlights was Manchester Museum’s Climate Control, a series of exhibitions and events, attended by over 90,000 people. MAST is now working with the council on a 2020 pilot programme and season of cultural activities to engage people on climate change.

There have been two key stock-taking moments; the first was MAST’s 2017 5-year report, which identified five key priorities:

The second key moment was the 2018 C-Change transferability study which laid out Manchester’s approach and identified opportunities to improve it.

There are three key aspects to Manchester’s approach

The continuity of Manchester’s cultural collaboration is underpinned by a number of key elements from the local government’s side:

Manchester was a candidate for the third “UCLG Mexico City – Culture 21 International Award” (November 2019 – May 2020). The jury for the award drew up its final report in July of 2020, and requested that the Committee on Culture promote this project as one of the good practices to be implemented through Agenda 21 for culture. 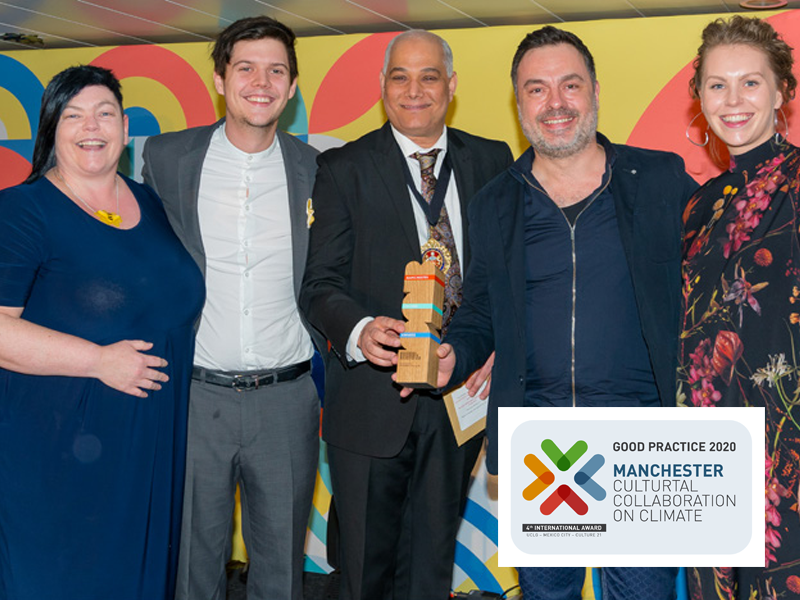