The City of Johannesburg (CoJ) is located in the plateau of the South African interior and is best known as the mining city since gold was discovered in the 1880’s. Today the city has about 7 million inhabitants and continues to attract more people because of its reputation as the economic engine of South Africa. The mixture of cultures makes Johannesburg a culturally vibrant city. However, it is still grappling with the spatial legacy of apartheid with its racially divided communities. Events such as the carnival helps to break those historical barriers to create a city in which the entire nation can feel at home and that they are equal participants in its prosperity. The carnival started because of crime in the Johannesburg suburb of Hillbrow, which is one of the economically depressed parts of the City, especially on New Year’s Eve when revellers used to cause havoc in the streets by causing damage to property and threatening the residents. Over a few years, Hillbrow became a no-go area on New Year’s Eve. It was intended to provide a healthy alternative to the destructive ways of revelry. Since the institution of the carnival in 2004, the crime rate in the inner city of Johannesburg has decreased drastically and has allowed young and old to walk in the streets more safely and to enjoy the festivities of New Year’s celebrations.

The cultural policies of Johannesburg draw heavily from the constitution and Bill of Rights which guarantee that the cultural practices of every community will be protected and promoted. Cultural activities and programmes are supported by a number of institutions and funding agencies as well as the national, provincial and municipal governments. These levels of government and cultural agencies are legally mandated to provide a platform for artists and heritage practitioners to express themselves in whatever way they choose and the right to freedom of speech. The South African government is a signatory to a number of UNESCO conventions that seek to promote cultural expression and heritage. Various state organs exist to monitor and evaluate the implementation of cultural heritage, including intangible heritage, including the South African Heritage Resources Agency and the Arts Culture Trust. Efforts to preserve and promote all 13 recognised official languages is enshrined in a special language policy. However, because of the number of diverse cultural groups in South Africa it is not possible for a middle-income country to effectively carry out all of the desired outcomes. The carnival enables dialogue across these divides through workshops that deal with potentially divisive issues in a fun and constructive manner.

THE AIM IS TO ENABLE CITIZENS TO PARTICIPATE MEANINGFULLY IN THE CULTURAL LIFE OF THE CITY IN ORDER TO CREATE STRONG AND RESILENT COMMUNITIES AND FOSTER SOCIAL COHESION.

Through the Joburg Carnival and its workshop programmes, sustainable development is encouraged through recycling. Colourful costumes produced all along the year are used during the parade and are made from recycled materials. During the workshop, during several months, artists are paid by the Johannesburg Municipality to go into communities to engage aspirant artists and unemployed youth and teach them how to make those costumes. That way, skills-transfer, and increasing environmental awareness among participants are facilitated. In addition, participants are taught how to make and play percussion instruments also made from recycled materials. These activities speak to the Agenda 21 South Africa goals of Sustainable development, changing consumption patterns (domestic tourism), because the carnival has the potential to become one of the events that place Johannesburg as one of the country’s preferred destinations for cultural tourism.

The aim is to enable citizens to participate meaningfully in the cultural life of the city in order to create strong and resilient communities and to foster social cohesion.

The Joburg Carnival takes place on the 31st December annually. The improvement of the inner city of Hillbrow has been an on-going project that involves improvements in infrastructure, in public amenities and in devising programmes to encourage citizen participation in the cultural life of the City. This includes among others the Arts Alive Festival that the City holds as a month-long festival in September, as well as the New Year’s Eve concert in Newtown and other activities that take place in all of the city’s seven regions. These efforts are part of the CoJ GDS 2040 vision for the future development of the City. There is also dancing involved and troupes from various immigrant communities. There are reports to be written before and after the event in order to make sure that all processes comply with financial management regulations and legislation and that the activities that are taking place are also compliant with the city’s vision and safety regulations.

THROUGH THE JOBURG CARNIVAL AND ITS WORKSHOP PGRAMMES, SUSTAINABLE DEVELOPMENT IS ENCOURAGED THROUGH RECYCLING.

One of the essential partnerships is with the Gauteng Provincial Government within the context of co-operative governance which also implements an annual carnival in deferent parts of the province. Other partners are organised cultural groups who play an active role as members of troupes, designers of costume and participants in the carnival performance. Other organised cultural formations are various groups including women in Sewing which teaches participants sewing so that costumes can be produced or the African Diaspora (organisation that is made up of smaller organisations that represent immigrant communities). Because immigrant communities are often vulnerable and because there trust between locals and immigrants has eroded over the years because of victimisation these organisations are key in securing the participation of immigrant communities and to builds trust.

The primary beneficiaries are the residents of the city. Although it is difficult to quantify the benefit, an indication is in the positive press that the carnival enjoys from various types of media print, electronic and online.

The impact on local government is seen in the fact that the carnival is one of the projects that the City of Johannesburg identified in its strategy to position Johannesburg as one of the capitals of culture internationally.

Artists can get regular work through the carnival and assist in the development of future artists develop broader creative industries.

Transversal impacts include the boost to tourism in the city and the improvement of social dialogues across the seven regions of the city that take place during the workshop phase of the carnival.

TRANSVERSAL IMPACTS INCLUDE THE BOOST TO TOURISM AND THE IMPROVEMENT OF SOCIAL DIALOGUES ACROSS THE SEVEN REGIONS OF THE CITY THAT TAKE PLACE DURING WORKSHOPS PHASE OF THE CARNIVAL.

All events and programmes undertaken by Johannesburg that involve its institutions, staff and budgets are subject to elaborate reporting procedures and are subject to audits by the auditor general. Johannesburg also has an oversight committee that is composed of various councilors that represent the citizenry and ensure that what the officials report is indeed reflected in the lived experience of their constituencies.The City has committed to funding the carnival and with a growing list of stakeholders and partners the future of the carnival looks brighter and brighter.

The city of Johannesburg was a nominated candidate for the second 'UCLG International Award – Mexico City – Culture 21' (January – May 2016). The awards jury produced a final report in June 2016 and asked the UCLG Committee on Culture to promote this project as a practical example for the implementation of Agenda 21 for Culture. 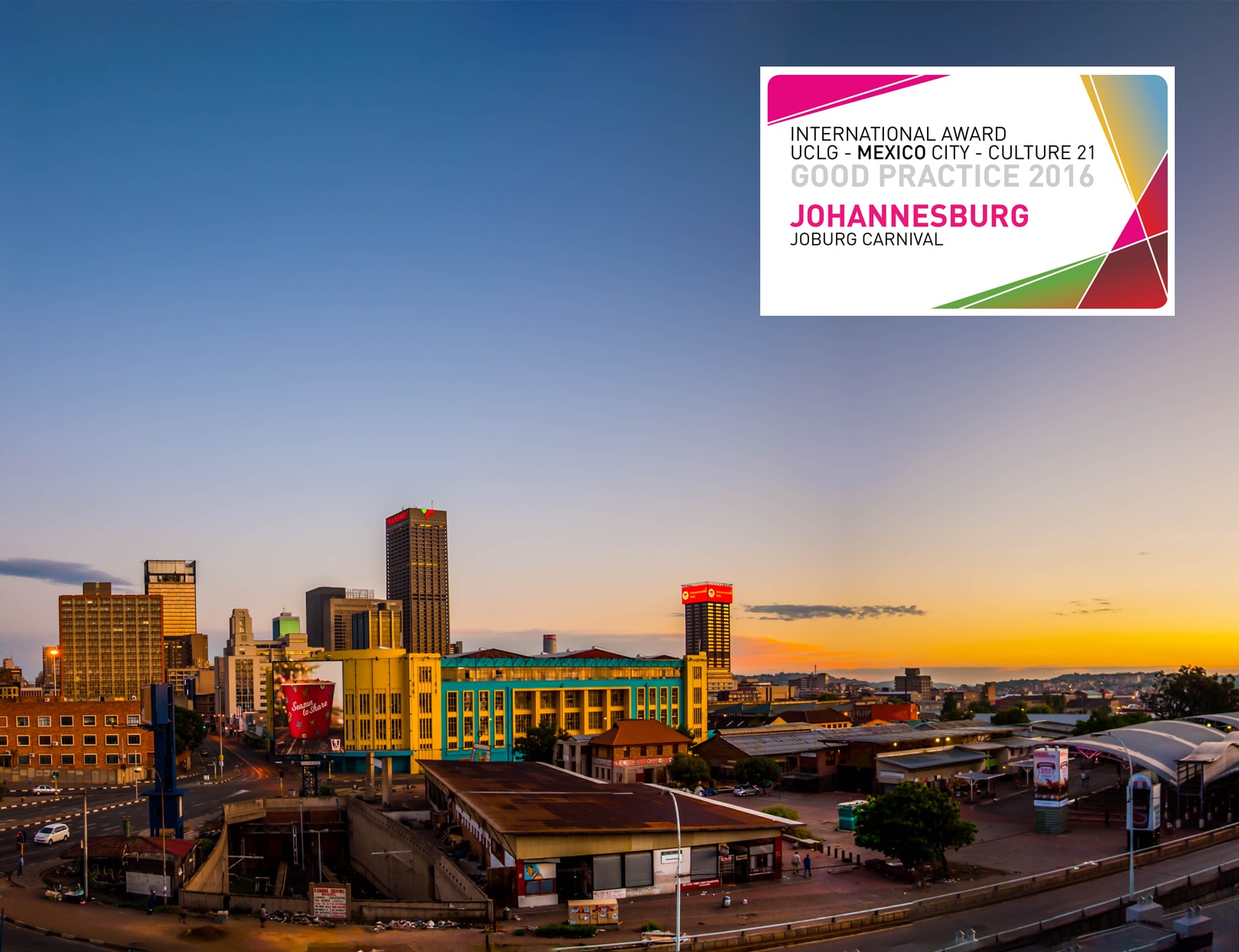