The City of Puno is located along the shores of Lake Titicaca, the highest navigable lake in the world at 3860m above sea level. Puno is considered the folkloric capital of Peru, and is home to the most number of traditional dances in the country. There are an estimated 350 registered types of dances, which are showcased throughout the year at a number of occasions and celebrations. It is also one of the most beautiful destinations in the country, given that very few cities have the privilege of being situated on Lake Titicaca. Puno is the most important bay port in Peru. Its strategic location between the cities of Cuzco (Peru) and La Paz (Bolivia) makes it a must-see destination for tourists travelling between the two countries.

The project's initial organisation dates back to the mid-70s and was comprised of a number of education institutions in partnership with the municipality. The aim was to show that the Inca Empire was the result of the area's high plateau and Lake Titicaca, according to age-old legends. Currently the organisation has been undertaken and upheld from year to year by an organising committee formed by the Municipality, the Folklore Federation, and a number of education institutions. It has stood as a true example of culture and tradition of the Lake's surrounding communities for the last 40 years. Today, cultural activities like this are growing and attract a number of visitors from across the country, as well as an increasing number of international tourists, for the annual celebration on the 5th of November. (This information was detailed in the original document nominating another festival: The Fiesta of the Virgin of Candelaria each February)

The aim is to enhance intercultural dialogue among Peruvian, Bolivian, and Latin American migrant communities and local populations, promoting a message of respect and compromise for the world's water resources.

The Municipality of Puno has a department for Culture and Sport Management, whose annual plan outlines events geared towards supporting cultural activities. However, there are no specific projects of any size for promoting culture. Both the local government and other institutions related to culture and tourism have indicated that they do not have a solid cultural policy outside of the Fiesta of the Virgin of Candelaria, which in 2014 was named by UNESCO as part of the Intangible Cultural Heritage of Humanity. As a result, the current initiative works along with Agenda 21 for culture, providing a multiplicity of links, which include the following.

These events aim to enhance intercultural dialogue among Peruvian, Bolivian, and Latin American migrant communities and local populations, promoting a message of respect and compromise for the world's water resources. They also seek to internationalise Puno as a destination for exceptional experience-based tourism.

Three (3) intercultural events are being planned and organised in the aforementioned selected cities, which are replicas of those held in Puno carried out in order to commemorate the legendary first Inca, Mano Cápac's, emergence from the waters of Lake Titicaca.

The project seeks to establish collaboration among the municipalities of these cities in order to promote the signing of inter-municipal agreements. The result of these would be to carry out scheduled events, which would be a first step towards an increasingly comprehensive collaboration among the four cities. Initiatives like these directly benefit public and private institutions that support staged productions of Mano Cápac's story, while indirectly benefitting the 250,000 residents of the province of Puno. By internationalising the event, cultural tourism in the province will increase. Overall, this also directly benefits Peruvian, Bolivian, and Latin American immigrant populations in the cities mentioned above. It will enhance the cultural and economic rapprochement with their native countries, thus generating new mechanisms of cooperation and co-development.

Its implementation seeks to outline overall principles for membership and to restrict discriminatory cultural "values" that emerge when one culture seeks to assert superiority over another.

Currently, one of the main expectations in managing the Municipality of Puno is to position it both nationally and internationally as a prime tourist destination. In order to achieve this, the city relies on its main strength of having rich cultural and folk traditions, which still have not been fully tapped into by the population.

Proper dissemination of the legend of Lake Titicaca to both national and international audiences would allow local cultural actors to revitalise their activities, thereby sparking other increasingly coordinated and networked projects. It would also result in the creation of new cultural spaces throughout Puno and the other cities, which would be progressively more specialised and accessible to the population.

Events are particularly important for those working in the industries of agriculture, fisheries, or craftsmanship in Puno. Additionally, the improved national and international diffusion of this celebration would establish a better influx of tourism for the city. Subsequently, through an increased demand for tourism services, this would create new employment opportunities and help fuel the cycle of tourist activity.

The propsal carries its own unique message of cultural diversity, which acts as an inclusive element of peaceful coexistence.

There is a genuine institutional will by the Municipality to provide sustainability and continuity to the project.

The City of Puno was a candidate for the second "UCLG Mexico City – Culture 21 International Award" (January - May of 2016). The jury for the award drew up its final report in June of 2016, and requested that the Committee on Culture promote this project as one of the good practices to be implemented through Agenda 21 for culture. 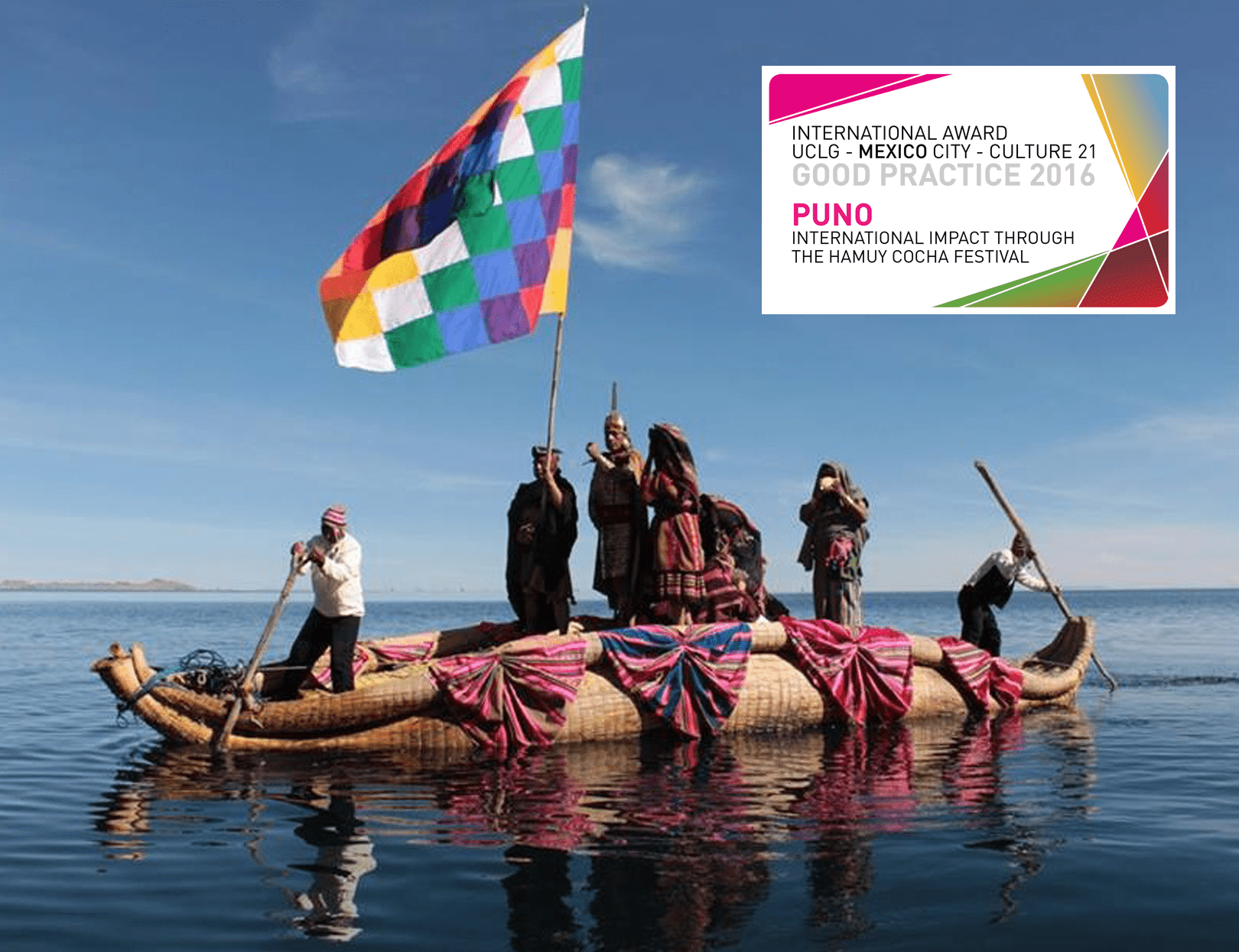