San Luis Potosí is the capital of the eponymous state, and has a population of about 1 million people, with a population density of 535.50 inhabitants/km². It is part of one of the most important Metropolitan Areas in the country, and the largest region in the state for which it is home to one third of the total population. It is the region’s main sociocultural, industrial, and commercial centre.

Its historic centre is recognized as a UNESCO World Heritage Site, and has a significant number of cultural organization, agents, and networks. It also boasts a number of different processes, identities, and cultural life in its various boroughs, colonies, and traditional neighbourhoods.

Until recently, the city’s longterm strategic planning lacked a clear focus on rights and the organizational structure of the public administration. Instead it had maintained an approach that made the cultural sphere subject to the municipal body for tourism, extending even to the scheduling of arts events. This limited the possibility of implementing appropriate or regionally responsive government strategies.

As a result, in 2018 the city launched an unparalleled process of innovation and institutional development that is focused on culture. The first step it took was to create a new work platform and coordination with the executive branch cabinet. The mission was to implement and mainstream public policies in favour of open and sustainable cultural development, built on democratic principles and a Human Rights.

The goal is a strategic foundation that will solidify the Municipality's path towards cross-sectorial, co-responsible cultural development through the guaranteeing, protecting, extending, and full exercise of cultural rights.

The city has turned culture into the fourth pillar of sustainable development.

In order to establish a local framework to guarantee cultural rights, the initiative first held a series of participatory meetings among approximately 300 stakeholders for change. All of the suggested proposals made it possible to identify what would be the accelerating guidelines, as well as to detail 26 strategic lines of action, organized into four broad principles around cultural policy: Cultural Rights, Cultural Democracy, Regional Equity, and the Promotion of Creativity.

In addition, these policies went through a process of aligning with the Sustainable Development Goals. This followed the “Guide to Incorporating the 2030 Agenda Approach to the Development Of State and Municipal Plans” (2017), and specifically the category of “SDGs based on Human Rights and freedoms, growth, sustainability, and equality and participation”.

As a result, it was possible to achieve regulatory reform on culture, an agenda that is now being driven by a strong multilateral cooperation initiative. San Luis Potosí stands out as the only municipality in the country to maintain a coordination agreement with UNESCO, the State Commission on Human Rights, the IberoAmerican General Secretariat, and My World Mexico, to create a cultural charter for the city. This brings together efforts from territories that have implemented similar tools such as Mérida, Rome, or Barcelona.

Adopting a cultural rights perspective involves rethinking the implementation of public policies and programmes that are traditionnally aimed at artistic groups to involve a broader audience, as well as to favour those involved in the community's cultural life.

To lay a strategic foundation that will solidify the municipality’s path toward crosssectoral, coresponsible cultural development through the guaranteeing, protecting, broadening, and full exercise of cultural rights, without discrimination for persons that live in, travel through, visit, or otherwise inhabit the city.

Adopting a cultural rights perspective involves rethinking the implementation of public policies and programs that are traditionally aimed at artistic groups, to involve a broader audience and community.

These policies are intertwined with #CultureIsARight. It is an exercise in multilateral cooperation favouring codesign and participatory construction of a new local framework for culture, development, and human rights. This initiative addresses the need for accelerated strategies identified during the SDG alignment stage. It is also seen as directly linked to the IberCultura Viva Cities and Local Governments Network of the IberoAmerican General Secretariat (SEGIB).

This framework is established under the “Charter on Cultural Rights for the City of San Luis Potosí”, a binding instrument that was developed locally, while remaining anchored in international principles, to recognize, protect, expand and guarantee the full exercise of Cultural Rights.

The Charter of Cultural Rights will make it possible to establish a point of no return for planning local cultural development strategies. Once it comes into effect, the charter will mandate the following:

Ibercultura Viva works with governments that are interested in a participative and cross-sectorial self-assessment of their public policies. It is an interpretation of Culture 21 Actions which aims to facilitate a self-assessment on the 9 areas outlined in the Agenda.

As part of the Network of Cities and Local Governments, the municipality adopted the Guide to Self-Assessment of Cultural Policies of the IberCultura Viva Program, take from Culture 21: Actions, which facilitates measuring the development of those communitybased cultural policies relative to the Commitments of Agenda 21. It involves a diverse group of collaborators that must analyze and assign scores for each of the items in the Guide in order to evaluate their level of development, or the status of the respective policy.

In addition, the provisions of the Charter and its regulatory framework shall empower the citizen participation body in cultural matters to suggest models and metrics for appraising and monitoring cultural policies and operational programs that arise thereof.

Joint development with international cooperation bodies, through broadened processes of social participation, that are in permanent beta phases and rigorous scientific social dialogues (which to date have accumulated the active involvement of more than 1,300 people).

The initiative made the decision to open itself up to monitoring bodies and processes: The Ombudsperson’s offices, in order to ensure the application of principles of universality, interdependence, and indivisibility; the Transparencia Mexicana (Mexican Transparency) organization, for the purposes of auditing and verifying public data.

The Charter on Cultural Rights for the City of San Luis Potosí is an international document that is legally outlined in the Municipal Regulations on Culture and Cultural Rights. These new local regulations give the charter a concrete broad legislation and a legal mandate for different management under current and future municipal governments.

The #CultureIsARight policy can be further strengthened by establishing a Municipal Fund for Cultural Initiatives. This fund is the result of the cooperation framework between the government and other sectors of society.

Finally, this regulation seeks to set up a culture council as a mechanism for social, technical, continuous, and asynchronous participation in implementing such change within the City Council. Some of its functions would include promoting citizen involvement in the Charter and ensuring the evaluation, continuity, oversight, and traceability of the programs supervised by the municipality’s cultural institution.

San Luis Potosí was a candidate for the fourth UCLG Mexico City – Culture 21 International Award (November 2019 – May 2020). The jury for the award drew up its final report in June of 2020, and requested that the UCLG Committee on Culture promote this project as one of the good practices implemented under Agenda 21 for culture.

This article was written by Gerardo Daniel Padilla González, Technical Secretary of UNESCO San Luis initiative and Coordinator for Innovation and Institutional Development at the Department of Culture, Cultural Centre Offices of the Municipal Palace, San Luis Potosí, Mexico. 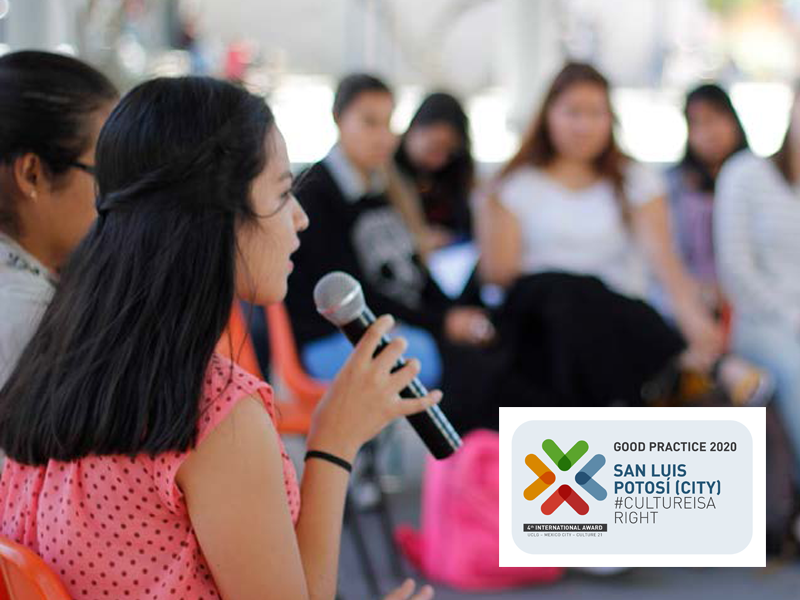