Saint-Camille is a rural municipality of 524 inhabitants located in the Regional County Municipality (RCM) of Sources, in the province of Quebec, Canada. During the 20th century, the town saw a continuous decline in its population and the erosion of its socio-economic fabric, further contributing to the exodus away to more urban centres. Noting this, citizens mobilized throughout the 80s and 90s to renovate and revitalize many of the town's abandoned heritage buildings. As a result, in 1988 the general store was transformed into a cultural and community centre, "Le P'tit Bonheur de Saint-Camille" ("The Little Joy of Saint-Camille"), which became a catalyst for local involvement.

Over the years, the town has been described as a "global village" by the French monthly magazine Le Monde diplomatique, and a place that stands out for its shared leadership and horizontal governance. Successes flow together and the city manages to attract new residents, who in turn contribute to the community's extraordinary vitality.

The town's development policies are all centered on shared principles: times for meeting and discussion, shared perspectives, and partnerships with organizations that are committed to finding solutions.

The 1980s were a pivotal decade for the development of Saint-Camille, marked by the creation of the "Le Groupe du Coin", a local club that fights for the preservation and rehabilitation of vacant heritage buildings. The group was successful in 1988 with the founding of the P'tit Bonheur, a community and cultural organization that would become the cornerstone of cultural development and local mobilization in Saint-Camille.

After more than 20 years of developing innovative projects in collaboration with inhabitants, the city of Saint-Camille adopted a sustainable development plan in 2008. The plan shifted from a more organic form of urban development to a more integrated type of development that included all levels of regional governance, and particularly Agenda 21 in the RCM of Sources. More recently, Saint-Camille adopted a specific Cultural Policy and ratified a cultural development agreement with the Quebec Ministry of Culture and Communications, making it the smallest municipality in Quebec to implement such an agreement.

Simultaneously, discussions are held with citizens on community and cultural development, as well as on the small-scale rural economy. Regular events like shows, community meals, and university training programmes have all strengthened volunteer involvement, particularly among seniors, and helped spread values ​​like tolerance and solidarity.

The project seeks to make culture and citizen participation key elements of the revitalization of Saint-Camille, a rural municipality, in order to reinforce its attractiveness and counter the exodus of population and population decline.

The strategy of revitalizing Saint-Camille through culture is divided into three major phases of development: the establishment of structuring organizations, mobilization around a demographic issue, and more recently the development of a new rural economy.

Faced with a deteriorating local socio-economic fabric in the early 1980s, several local leaders from the political, cultural, social, and economic sectors of Saint-Camille established a private ethical investment group called "Le Groupe du Coin", designed to find new uses for heritage buildings that had been left vacant. The Groupe du Coin acquired the former general store and offered the place to the P'tit Bonheur of Saint-Camille, a community and cultural organization. The Groupe du Coin then participated in converting the former church house into a housing co-op for seniors (2000). Members were also closely involved in the creation of a Development Corporation (1995) and a gardening cooperative (2003).

Since 1988, the P'tit Bonheur has been involved in local cultural activities by scheduling shows, community events, and intergenerational activities. In addition to its 20,000 annual visitors, the project involves some hundred volunteers. Since it was founded, the P'tit Bonheur has proven the viability of establishing a cultural centre in a village of just 500 inhabitants, and developed original means of self-financing. The weekly "pizza Fridays" held for over 30 years by volunteers, has allowed the organization to finance up to 80% of its initiatives.

As a friendly meeting place for residents and visitors, the successful P'tit Bonheur has created a particularly favourable climate for culture. Many initiatives have followed, including: a museum of ancient objects, an international mask festival, classical concerts, an academy of early music, a group of rural artists, an arts workshop, amateur theatre, and international exchanges with communities in Mali.

Finally, through one of its activities, the Rural Environments Innovation Center (CIMR), the P'tit Bonheur has maintained close links with the research community.

Phase 2 — Mobilization Around the Demographic Challenge:

During the 2000s, the city was faced with an historic demographic depression of 440 inhabitants which endangered the survival of the primary school. Since then the goal has been to increase the population by 10% in 10 years. It was for this purpose that the "Les Fermettes du rang 13" project was born on 300 acres of wooded land 7 kilometres from the village that existed outside the electrical and telecommunications networks. Hosted by local stakeholders, 25 families formed a cooperative to subdivide the land, build access roads, and serve it with electricity and fibre optic lines. This project made it possible to house 80 new inhabitants, including more than 30 children and entrepreneurs who revitalized the local economy and generated a population growth of 14.4% from 2006 to 2011. The average age of the village has even gone down below the level of the province.

In 2006, following the decline in the number of practicing members, the Catholic Parish council was no longer able to take responsibility for the maintenance of the church in the medium term. Discussions on the transformation of the church lasted 10 years, which was enough time to find a new purpose for building and finance the necessary renovations. The public was consulted and informed at every important step along the way at 5 municipal forums and 7 public meetings.

After updating the built heritage, the municipality acquired the church in 2016 to make it a multipurpose centre, and undertook works costing around $ 1.2 million, 2/3 of which was funded by the federal and provincial governments. In total, 8 local organizations, including the municipality and the P'tit Bonheur, have joined forces to create a cooperative to offer new services. The cooperative now offers comprehensive group services and event hosting as well as a rich cultural programme.

In 2017, the P'tit Bonheur coordinated a major technological shift for the community with the implementation of a new project called the "Open Scenes" network, developed by Montreal's Society for Arts and Technology. The only one of its kind in the world, the initiative involved setting up mobile conferencing and webcasting equipment for 21 cultural broadcasters. With the support of 13 partners, the P'tit Bonheur centre and the old church were connected to very high speed internet in order to establish a hub for digital broadcasting, training, and animation in art, culture, and comprehensive local development.

Local vitality favours the development of new economic activities, particularly in the tertiary sector and the creative economy, such as: a production company for a youth television programme that is broadcast on national television; the establishment of a research centre on emerging cultures in Canada; or a rural conference centre, which offers interregional events through mobile conferencing.

Thanks to its activities in cultural and community mediation, Saint-Camille has gained a strong reputation, and initiated a virtuous circle that has been solidified in subsequent developments including the family policy and the sustainable development plan (2008), the seniors’ policy (2012), the tree policy (2016), and the cultural policy (2017).

The pilot projects launched in collaboration with the academic sector have enhanced the quality of life and the local appeal of the town.

Successive revitalization initiatives in Saint-Camille have completely transformed the demographic situation (+14,1%), creating a number of jobs and major investments in the community.

Recognition of the vitality of local actors generates significant investments for cultural actors. The per capita amount granted under the cultural development agreement with the Ministry of Culture and Communications is 47 times larger in Saint-Camille than in the rest of the Estrie region.

The population's growth of 14% over 7 years with the establishment of 25 new families has had a direct impact on school attendance, with the opening of a new class. Many entrepreneurs and businesses have also established themselves in the region thanks to the advent of high-speed internet and remote working.

The economic and social implications of the revitalization policy strengthened the role of culture alongside the other pillars of sustainable development.

Overall, the successes of the rural and agricultural community of Saint-Camille have been due to its ability to demonstrate creativity and solidarity in finding innovative responses to the challenges it has faced, to question and redefine its priorities and lines of action, and to remain open to new ideas and opportunities.

Hosting numerous cultural and community mediation activities, both formal and informal, has also aided in welcoming and integrating a large proportion of newcomers to Saint-Camille while sustaining the values ​​of the community and local mobilization.

Since the launch of the various projects, recurring funding has been dedicated to cultural stakeholders thanks to a cultural development agreement. The agreement alone represents an annual investment of $47 per inhabitant in Saint-Camille until 2020.

The City of Saint-Camille was a candidate for the third "UCLG Mexico City – Culture 21 International Award" (November 2017 - May 2018). The jury for the award drew up its final report in June of 2016, and requested that the UCLG Committee on Culture highlight this project as a good practice in the implementation of Agenda 21 for culture, as a special mention for the third awarding of the Prize.

This article was written by Olivier Brière, Development Officer in Saint-Camille, Quebec, Canada. 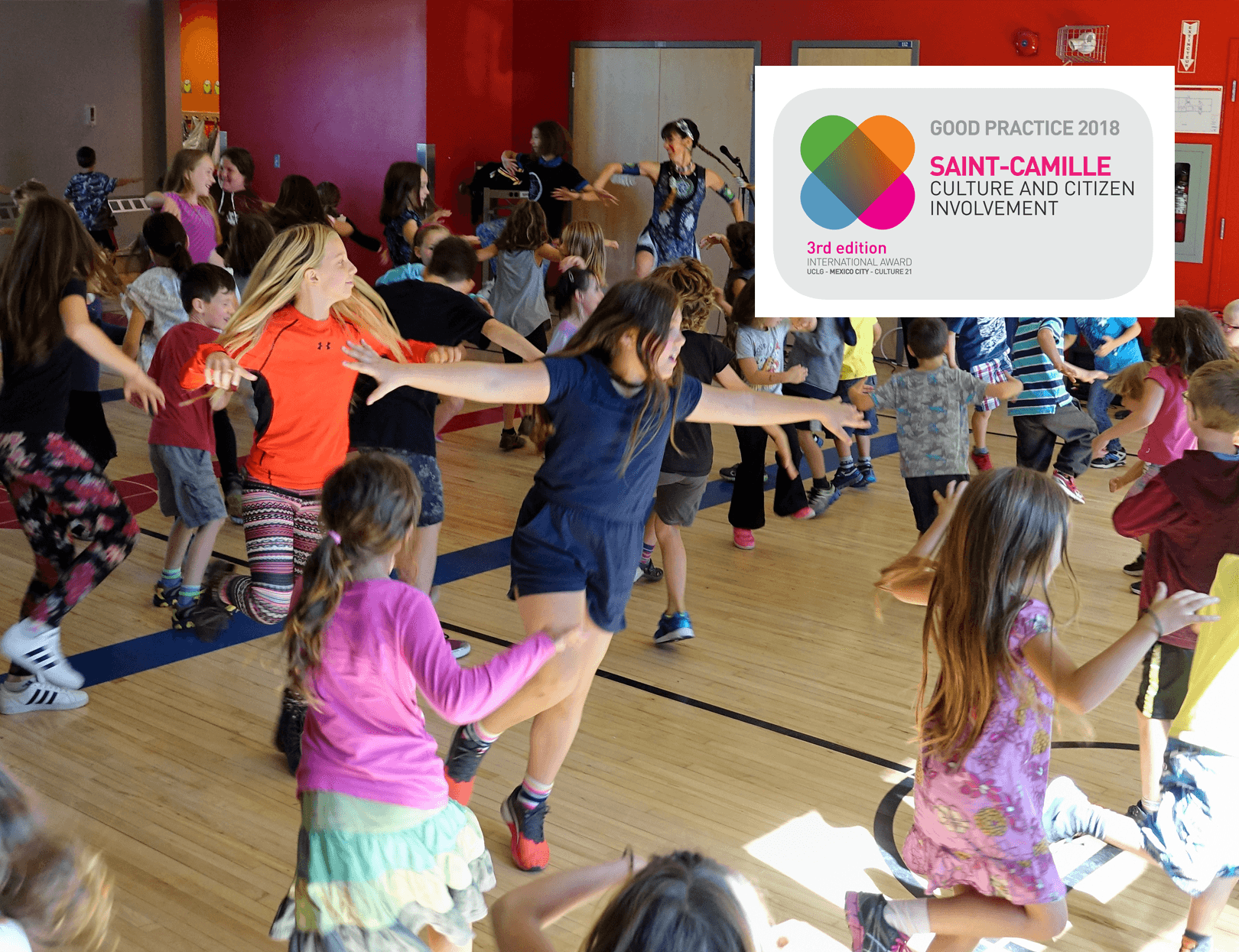