San José is the capital of Costa Rica. Comprised of 11 districts, it is the second-most densely populated area in the country, home to 6.9% of the total national population. The 2011 National Population Census noted 322,155 inhabitants and a population density of 7,220 inhabitants per square kilometre. With 86.4% of the territory already urbanized, the city is also experiencing accelerated vertical development and a sustained process of re-population. Aside from this, 8.4% of the region is dedicated to green spaces or sports and recreation spaces, which are vital for city life and citizen co-existence.

The city centre is home to the majority of the country's infrastructure for art and culture: theatres, museums, galleries, libraries, academies, heritage buildings, and much more. The capital is the epicentre of artistic activity, large events, creative endeavours, and the cultural industry.

The city has a Historical Centre, classified as such in 2013, as well as Urban Development Regulations that set special standards for Culture and Tourism Zones (ZICT). It is in these zones where the majority of heritage buildings are located, in addition to other architectural and historical sites that are not yet officially designated.

Through such initiatives, San José seeks to establish an international reputation as a cultural tourism destination.

In 2009, the Department of Cultural Services added the Department of Economic, Social, and Cultural Development for the City of San José. This signalled a need to develop the city's cultural policy (hereafter referred to as the PCSJ, or Cultural Policy of San José), which offered a framework for managing cultural development throughout the municipality. At that historical moment, the country had no national cultural policy and the national governing body, the Ministry of Culture, was only in the design phase of formulating the National Cultural Rights Policy. Support for the canton's cultural development used to depend on the interest and political agenda of each administration, thus making sustainability very fragile.

To start the project and transcend political parties, while ensuring sustained momentum in the sector, the first requirement was that content should be developed with citizen participation. An interdisciplinary, interdepartmental, and interinstitutional team was created that proposed carrying out citizen consultation sessions to garner input on the formulation of a guideline document.

Public space is the key area of cultural management, which involves increasing safety under the principle: "an occupied space is a safe space".

Consultations were held by population: municipal officials from key agencies in managing development of the city, cultural, educational, political, business, youth, district, and neighbourhood sectors.
In 2012, the project's team drafted the PCSJ legal document. It developed a policy action plan, approving the Municipal Council in 2013. The document was officially published in March 2013, and was implemented thereafter.

In October 2012, the city of San José formally partnered with Agenda 21 for culture, thereby recognising culture as the fourth pillar of sustainable development. This was stated in the Municipal Development Plans, changing the planning of actions in the field of culture, or other cross-cutting initiatives.

Item 5 of the “Recitals” of the PCSJ states: "During the planning process for developing a Cultural Policy of San José, Agenda 21 for culture was adopted as a reference framework, ratified in agreement five of the Regular Session between the Municipal Council and the Mayor's Office of San José (2012)".

Additionally, their actions are linked to the fulfilment of 4 SDGs:

An Action Plan was developed to give substance to the guidelines established in the PCSJ. It was built collaboratively with different actors from the cultural sphere. Once ratified, a second fundamental action was carried out to mainstream the approach: modifying the 2016-2020 Municipal Development Plan (a medium-term institutional strategic planning tool). This modified the Department of Cultural Services, but also other departments such as Public Safety, Urban Management, and Disaster Risk Management. Finally, the PCSJ influenced the Annual Operating Plans by modifying official actions in its projects and activities. Phases 1, 2, and 3 have been completed, with the technical support of UN Habitat, industry stakeholders, and citizenship.

San José has been the first city in the country to approuve a cultural policy developed through citizen participation.

However, the obstacles must also be noted. The main difficulty has been to legitimise and position culture as the 4th pillar of sustainable development within the government. Additionally, there has been inadequate staffing due to a lack of specialised training in cultural management in Costa Rica.

The main results are the increased investment in government operating plans, and the perspectives that frame proposed investment projects and other institutional policies. In addition, existing projects were updated, allowing for reflection on their impacts and their effects on the development of the city. Since 2013, all actions have been framed within the guidelines of the PCSJ Action Plan.

In order to measure the overwhelming impact of implementing the PCSJ, it is necessary to raise the baseline of its indicators, a process that unfortunately has not been possible due to a lack of staffing, support, and financing.

However, it is clear that today San José is a city with a greater number of cultural ventures. The industry is starting to band together subsequently improving the quality of arts, gastronomy, and artisan work. This is evidenced year after year with public calls and selection processes for festivals throughout San José. The city now has better conditions that allow urban organisations to work towards their specific objectives within the framework of the PCSJ.

The focus has shifted from promoting new and existing projects towards providing reflection on their impacts and effects on the city.

Forming a Council of Culture and Tourism in the future. A body dedicated to consultation, debate, coordination, evaluation, and monitoring of citizen and sectoral participation in cultural development.

Creating a table of indicators and raising the baseline as mechanisms for evaluation (Phase 3), to be implemented by the municipal management team and analysed by the Council of Culture and Tourism, which would make adjustments and revisions to the PCSJ and its respective action plan.

Despite the fact that PHASE 3 of the project has not been completed, the PCSJ has been a success. It has set a benchmark for administrative and citizen consultations in proposing projects, and today acts as a guide for strategic planning. The dissemination and distribution of the document in print and electronic media has been a key factor in its success.

A second key factor has been the perseverance and steadfastness of the Municipal Management Team, which has held firmly to the implementation of the Action Plan over the last 4 years, despite not having experts in development, implementation, and evaluation of policies.

San José was a candidate for the third "UCLG Mexico City – Culture 21 International Award" (November 2017 - May of 2018). The jury for the award drew up its final report in June of 2016, and requested that the UCLG Committee on Culture promote this project as one of the good practices to be implemented through Agenda 21 for culture. 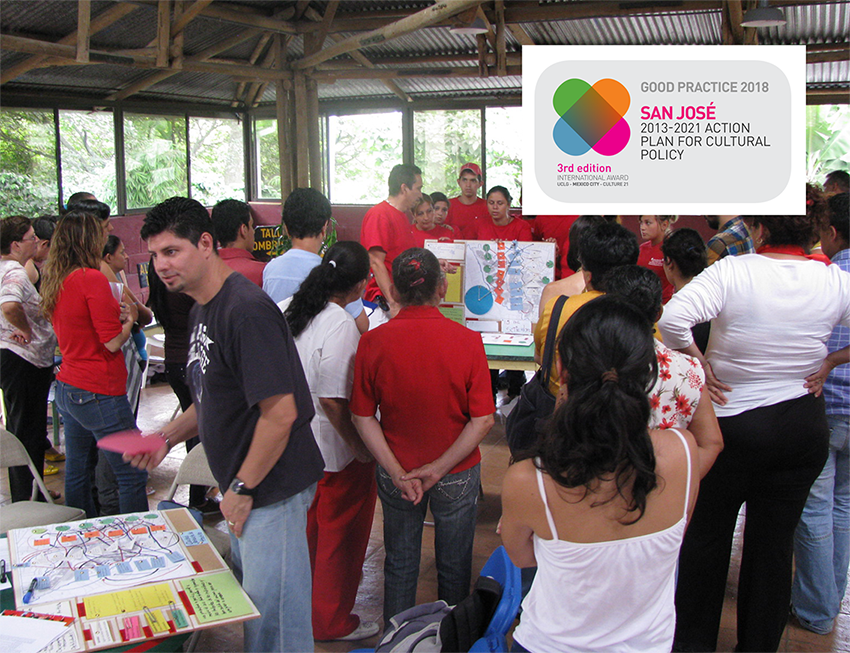