Cordoba - Your neighbourhood on stage

Cordoba is located in the centre of the country and is both an industrial and university city. Since being founded in 1573, the city has been a meeting place of business and culture for various regions around the country due to its geographic location. It is known as "The Scholar" due to its university population and for having been the first city in the country to have a university. Cordoba is also known as the "City of Bells" for its deep religious roots and valuable Jesuit legacy, internationally recognised today as a part of the heritage of humanity.

The Suquía River crosses the city from west to east. Its name comes from the Indigenous peoples and the river is crossed from south to north by the Cordoba Cañada arroyo canal.

The city's urban centre is made up of a central, commercial and administrative area, and subsequent residential and industrial areas. These are all mixed across flat, gently sloping, and low hilled areas. The city's character, as in all large cities, comes from creating tangible and intangible identities. These are the result of its history of over four centuries of different political and socioeconomic periods.

The motivation for carrying out this project came out of the pre-existing artistic expressions throughout various neighbourhoods. These had a positive impact in terms of their social development. However, they were not able to grow beyond single events or to generate a true joint partnership that prioritises equipment, production, and diffusion for cultural expressions developed up until 2010.

Since 2011, the Secretary of Culture has outlined a clear policy that adopted three essential principles for all of its activities:

This government policy enables progress to be made on a cultural platform that seeks to uphold a plurality of opinion, and to ensure an abundance of genres and styles. The "YOUR NEIGHBOURHOOD: ON STAGE" programme is a part of a policy under the body on Community Culture, whose aim is to strengthen cultural areas of development for citizens. Another goal is to stimulate people's ability to transform adverse realities through art and creativity.

The programme guarantees that all citizens have the ability to access the cultural resources necessary to freely explore the process of establishing their own identity, while also being able to participate in cultural life. Participation in “Your Neighbourhood: On Stage” favours developing awareness, choices, expression, and critical thinking skills in those who engage. It fosters harmonious interaction, citizenship-building, and peace within the city.

Among the commitments posed by Agenda 21, which synthesise the cultural dimension of a sustainable city, the programme falls especially under the 6th commitment of Culture, Equity, and Social Inclusion.

“Your Neighbourhood: On Stage” empowers individuals and human groups to explore their identities, histories, and sense of belonging, since the participants in these festivals are artists from the area. They are able to showcase their work to fellow residents on stage through a professional show. As a result, even in minority populations, artistic expression can enter into an intercultural dialogue with other groups. In some cases this enables access to employment opportunities, as well as improving the safety and image of certain areas.

Another issue that should be noted is that the programme seeks to reclaim public spaces on behalf of each community as an exercise in citizenship. This promotes individual and collective development entities where people can feel empowered to change adverse realities and to strengthen the social fabric.

The project favours developing awareness, choice, expression, and critical thinking in those who participate. It fosters harmonious interaction, citizenship-building, and peace within the city.

Efforts have been coordinated with over 110 neighbourhood institutions and organisations such as civic centres, schools, academies, public libraries, clubs, and other groups. Some of these organisations are the result of the policy of decentralisation and citizen participation, driven by the municipal government since the 90s.

Furthermore, a joint project was carried out in 2013 with the National University of Cordoba, whose extension teams shared regional information on a number of organisations, many of which ended up becoming part of the resolution.

Over 350 groups and individual artists met throughout the course of fifty open-air festivals, attracting over 35 thousand audience members. The programme's most influential neighbourhoods were working class areas, and the public benefitted from free and open access to important neighbourhood festivals. Organisations involved in this were strengthened through the consolidation of regional networks that work toward agreements and connections with other issues faced by the area.

Building and strengthening communication networks and local identities. Some groups successfully transcended the authority of the programme to consolidate themselves as organisers and producers of neighbourhood cultural expressions independent from the official resolution.

The programme lacks an area of research and analysis. As a result it is difficult to confidently demonstrate the cross-cutting impacts of the programme. The 2017 edition is scheduled to incorporate a monitoring unit, which will allow for the close monitoring of results achieved by developed actions.

“Your neighbourhood: on stage" empowers individuals and human groups to explore their identities, histories, and sens of belonging.

The programme specifically integrates the Municipal Community Culture Directorate. This depends upon its current consideration for the 2016 budget of the Secretary of Culture. Eight festivals are planned for the current year, including a closing ceremony. These will bring together expressions and groups that would expect to see the most development from the proposed objectives of the programme.

The City of Cordoba was a candidate for the second "UCLG Mexico City – Culture 21 International Award” (January - May of 2016). The jury for the award drew up its final report in June of 2016, and requested that the Committee on Culture promote this project as one of the good practices to be implemented through Agenda 21 for culture.

This article was written by Francisco Tomás Marchiaro, Secretary of Culture for Cordoba, Argentina. 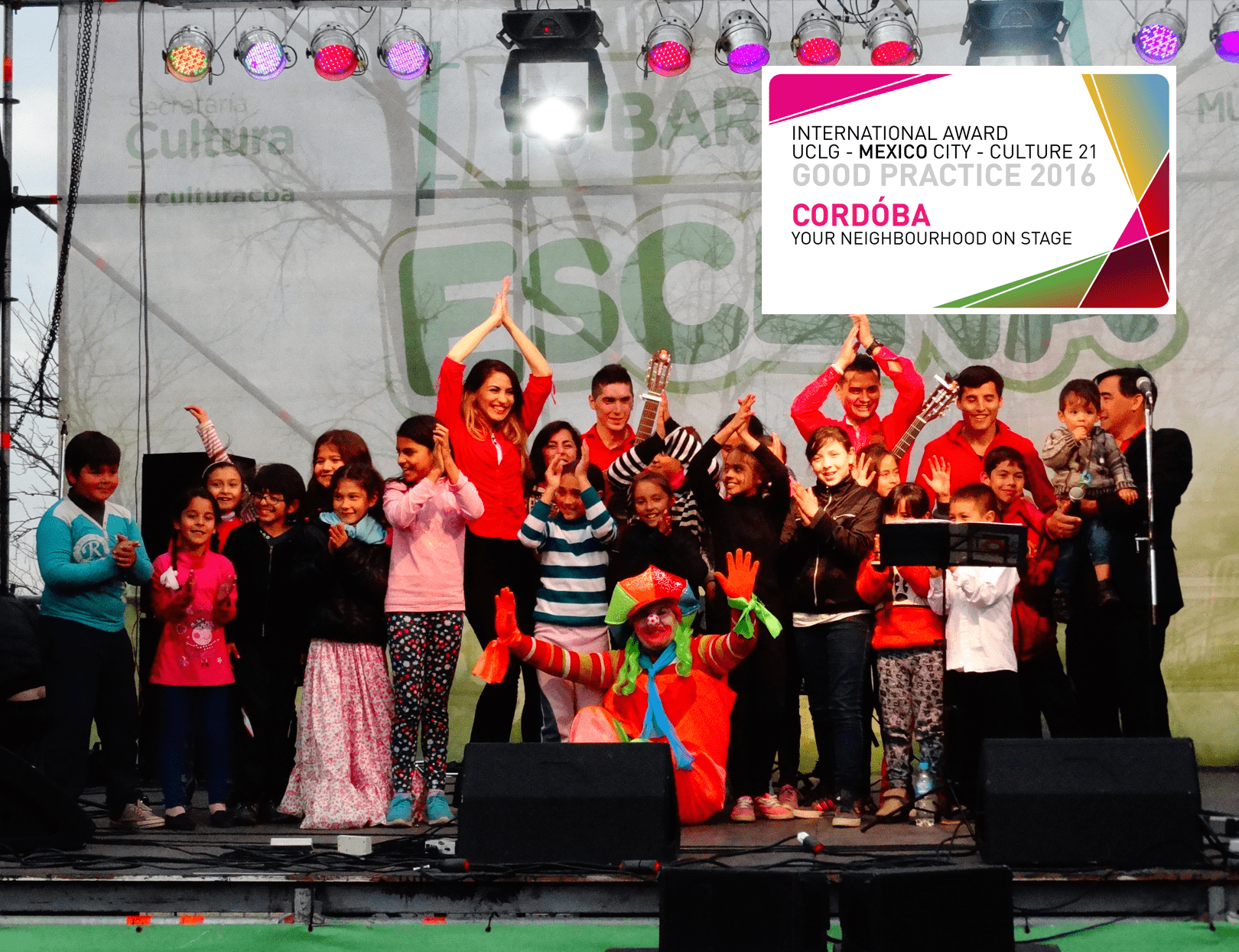