Xi’an, known as Chang’an in the past, is the starting point of the ancient Silk Road, and the political, economic and cultural centre of ancient China. As one of the oldest metropolises in the world with rich cultural resources, strong modern industrial bases and huge market potentials, it is the node city along the Belt and Road. Daming Palace, used to be the most splendid architectural complex in the city, showcasing the political and institutional civilisation of the Tang Dynasty. However, the north Xi’an, where Daming Palace is located, has become the biggest shantytown in the city, with insufficient infrastructure, increased insecurities and slow development. The protection and rehabilitation project of Daming Palace has brought great changes to this region and has made Daming Palace heritage area a prominent cultural landmark.

The protection and rehabilitation project of daming palace has brought great changes to this region and has made daming palace heritage area a prominent cultural landmark.

Based on the Development Plan of Guanzhong Plain Urban Cluster of Central Region of Shaanxi Province, issued by National Development and Reform Commission (NDRC) in 2018, Xi’an aims to build an East Asian City of Culture in the next 18 years, focusing on Chinese traditional culture, showcasing Chinese elements, enhancing protection and inheritance of cultural heritages, and promoting international communications and exchanges.

After many years of implementation, an urban creative community integrated with culture, arts, and tourism has been formed, which centers on the Daming Palace Heritage. For its achievements in integrating culture and tourism, Xi’an is honored to serve as the permanent site for World Culture and Tourism Forum in 2019. Also, Xi’an was awarded with the East Asian City of Culture for 2019.

Daming Palace Heritage Protection Project effectively coordinated the complex relationship between cultural relic protection and comprehensive urban development. Through the implementation and operation of this project the quality of life and living environment of the local citizens have been improved. Additionally, based on restoring cultural features, social services and educational function of cultural heritage have been a key element.

Daming Palace National Heritage Park, covering an area of 3.2 km2, was established on 1 October 2010 with 36 relics, six of which remained above the ground. On 22 June 2014, the Daming Palace Heritage, as a key historical site in the joint-application project Silk Road: Routes Network of Chang’an-Tianshan Corridor, was successfully listed in UNESCO’s World Cultural Heritage.

Through the implementation and operation of this project the quality of life and living environment of the local citizens have been improved.

Focusing on heritage protection and people’s livelihood, Daming Palace Heritage Protection Project explores a way of sustainable development, the success of which informs the local government’s cultural policies. Xi’an Declaration, 2005, provides principles and policies support for the protection of the project. In 2007, Xi’an Municipal People’s Government announced the functional administrative department to be set up and some supporting policies to be matched.

The project mainly protects cultural heritage, assets, and diversity. The heritage and park model adopted by the project not only saves the cultural heritage but ensures public cultural rights. The heritage park supplies a public platform involving heritage information, cultural communication, education, performances, events, and physical exercises. About 200 cultural groups, art campaigns, creative businesses have been nurtured on this site, which makes the park the most influential public space in the area.

The project realises the goals of heritage protection, livelihood improvement, and green development. The per capita housing area has been raised 150% in this region. Infrastructure, such as traffic networks, schools, hospitals and supermarkets, are all well offered. The ecological environment of the heritage area has been restored and improved and 92% of the local population are satisfied with the project. Additionally, the area attracts a great number of domestic and overseas visitors, in 2019 welcoming around 10 million tourists. Some famous business clusters in this area, like Dahua 1935 Cultural Block and Wanda Plaza, have provided many jobs for local population. As a result, the project has stimulated the economic growth, furthered integration of culture and tourism, and contributed to the sustainable development of Xi’an.

The project has stimulated the economic growth, furthered integration of culture and tourism, and contributed to the sustainable development of Xi'an.

Xi’an showcases the national characteristics and cultural values of Daming Palace and explores a paradigm of how a modern city co-exists with culture and at the same time maintains sustainable development. The project has enhanced the city’s cultural and aesthetic values, and furthered steps of urbanisation focusing on culture, harmony, and nature. Also, the project provides citizens with many public spaces to share cultural services and information, as well as to hold cultural activities and events.

The project is working towards:

In October 2007, Xi’an Municipal People’s Government agreed to establish the Administration Oce of Daming Palace Heritage Protection and Construction (AODPHPC), which is mainly in charge of heritage protection, management and park construction, among other duties. In October 2010, the AODPHPC approved the establishment of Daming Palace Heritage Protection National Park Management Company, which is mainly responsible for the daily operation of the heritage park. The Daming Palace Heritage is also a key historical site in the project Silk Road: Routes Network of Chang’an-Tianshan Corridor and is listed in UNESCO’s World Cultural Heritage.

Xi’an was a candidate for the third “UCLG Mexico City – Culture 21 International Award” (November 2019 – May 2020). The jury for the award drew up its final report in July of 2020, and requested that the Committee on Culture promote this project as one of the good practices to be implemented through Agenda 21 for culture.

This article was written by Center for International Friendship Cities, Xi’an, China. 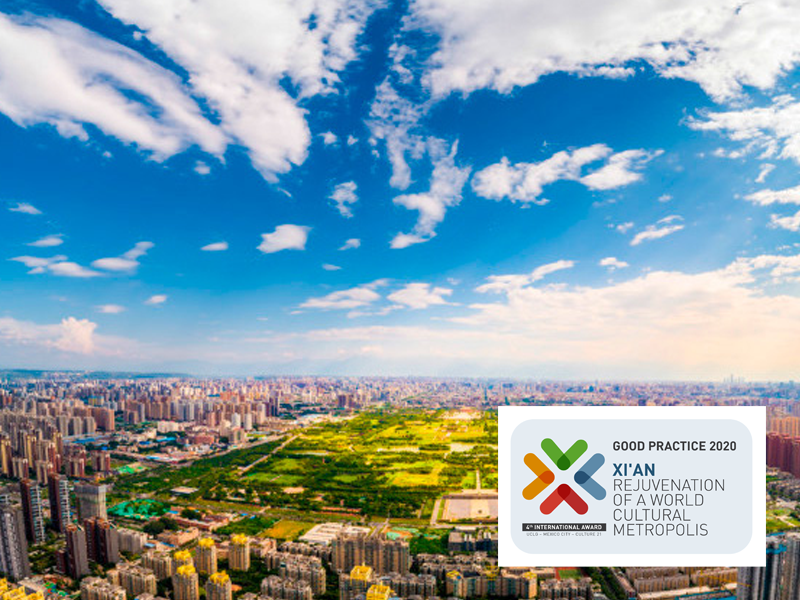