Mérida is home to just over one million inhabitants, and showcases its multiculturalism in its architecture, gastronomy, lifestyles, and creation. It has been recognized with international awards and has been named the most liveable city in the country. However, it still suffers from domestic violence issues and lower incomes than the national average, as well as notable lack of services.

For years, the historic centre was seen as an empty and unsafe space at night. After significant investment in the area, the neighbourhood improved drastically. In order to promote itself as a safe place, and attract visitors to take advantage of the centre’s entertainment and gastronomy, the White Night program was created.

Mérida’s initiatives are carried out in accordance with their Charter of Cultural Rights, Agenda 21 for culture guidelines, and the SDGs of the 2030 Agenda, all while using the Radar 1 Self-assessment tool. Furthermore, the Municipal Fund for Culture and Sustainable Development allows citizen proposals to be voted on and subsidized through networks for partnerships, common good and interests, and sustainability with respect to: ecology, economy, and inclusion.

The White Night began in 2013 following the City Council’s drive to provide the Old Centre with initiatives focused on coexistence. As a result, the municipality simultaneously opened a number of cultural spaces to re-establish the zone’s public areas. This enabled citizens of all ages, particularly youth, to engage in the intergenerational exchange of experiences in cultural centres, galleries, museums, and more, outside of the normal operating hours.

The biannual program is open to all citizens and it presents art, creativity, and cultural activities from Mérida, its sister cities, as well as some creative or innovative trends from the international scene.

In accordance with Agenda 21 for culture, the project contributes to:

It relates to the targets outline in the following:

The White Night opens up a number of cultural spaces at the same time, to invite people to rediscover and redefine the area's public spaces, with the aim of addressing its high levels of insecurity.

The goal of the program is to provide open access for all citizens to art, creativity, and cultural activities from Mérida, its sister cities, as well as some creative and innovative trends from the international scene.
Specific Objectives:

All of Mérida’s residents and visitors who wish to participate can enjoy this program. Any citizen who wished to present or promote a creative proposal can take part. Also, the local gastronomic, artisan, art, hospitality, furniture, and technology supply industries all benefit.

Each White Night sees some 40,000 cultural activities take place. Year after year, the number of participants and attendees grow exponentially. It opens up all levels of government and private commercial venues in the area. More and more organizations are interested in joining the event.

The White Night is held twice a year on a Saturday, in May and December. Due to its success, with respect to the number of visitors and revenue, two “Eves” are also held the day before the White Night, with tours that focus on the city’s history through interactive narratives. During the event, more than 40 galleries open their doors to debut visual art exhibitions, musical and other performances, theatre, and poetry readings. In addition, attendees can find creative bazaars full of contemporary design and artisan pieces.

All of the city centre’s performing arts venues are open free of charge. There are also open-air dance performances and shows hosted in all the public squares and parks. The scheduled events end in the early hours of the morning on Sunday. Restaurants and bars have also joined in on the event.

Multiple civil society organizations participate. They address topics such as animal rescue, water conservation, and environmental awareness and preservation at various information kiosks. There are also art groups that perform various activities and workshops in the city’s parks. Hotel and gastronomy businesses have joined the White Night program with special offers and discounts.

The White Night includes local, national, and international projects in its events. Many of the agreements are made through intergovernmental institutional contacts, by partner entities, or directly with the representatives from each group.

With nearly 400,000 participants, the White Night has become a benchmark for other events in southern México. Increasing numbers of local and global partners are participating in the program. It has positioned itself as an important platform for showcasing arts production and diverse cultural proposals.

With nearly 400,000 attendees, the activities of the White Night have become a benchmark for other events in the southern part of the country, increasing numbers of local and global partners are participating in the program. It has positioned itself as an important platform for showcasing arts production and diverse cultural proposals.

Citizen participation has been improved through this project.

The White Night has normalized scenarios and activities that help make sense of governmental actions around using public spaces, in addition to multi-level objectives.

Collaborative networks have been created that propose multidisciplinary cultural performances in response to requests for events, which themselves establish important frameworks and offer economic benefits.

With its call for proposals, the program outlines the municipality’s cultural policy so that the proposed projects can align with the strategic approach of the documents that promote sustainable development. It is clear that the White Night, offers demonstrable cross-cutting benefits and value to the city.

Attendance is measured with aerial drones, audiovisual evidence, hashtags, and digital media. The evaluation of participants’ quality of experience and preferences, as well as the satisfaction levels of the event’s partners, is carried out by collecting consumption data from private business partners and by considering perspectives from the media.

The vital parts of the project’s success have been the consistency of the event, the positive coverage by the media and community. In addition to these, the diversity of the events throughout the city centre are significant, as they offer an experience that is difficult to find elsewhere in the country. Finally, the fact that the event is free and open to all is essential.

The White Night is one of the most successful programs by the municipal government. As such, it is planned to continue despite changes to municipal administrations.

Its organization has gone beyond direct instructions to develop a structure that can function on its own after 12 iterations. Sufficient communication and partnerships have also been established, which sustain the project on a smaller scale if funding cannot be found.

Mérida was a candidate for the fourth UCLG Mexico City – Culture 21 International Award (November 2019 – May 2020). The jury for the award drew up its final report in June of 2020, and requested that the UCLG Committee on Culture promote this project as one of the good practices implemented under Agenda 21 for culture. 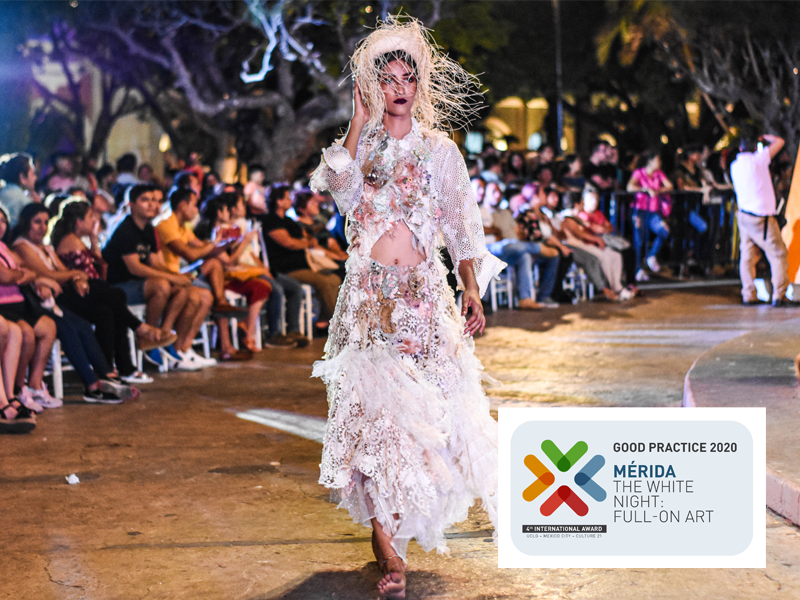