The city of Mashhad is a metropolis with a population of nearly 3 million. It is a religious city which has turned into a pilgrim and tourist attraction due to the presence of the Holy Shrine of the Eighth Imam of the Shiite, which attracts around 25 million pilgrims yearly. The city is also historically a cultural center, which has been home to many famous literature, music, and cinema masters. Mashhad is the Iranian metropolis closest to Afghanistan, and one of the first destination for Afghan refugees, which were the first immigrant population in Iran for the past four decades due to the country’s internal wars.

Mashhad’s population has been increasing over years, as Afghanis have immigrated successively in 1997, 1980, and 2003, and Iranians from various parts of Iran have settled there to seek safety from the 8-year war between Iran and Iraq.

The Sholough Bazar is located in a suburb of the city of Mashhad, in a relatively young (35-40 years old), and particularly challenging urban area. The marketplace area covers around 200 ha of urban blocks, and the residential area, which has grown organically, is characterized by a high population density and small granularity, with issues related to building sustainability. However, over the past three decades, local inhabitants have co-existed without tensions related to immigrations, and have seen an increase of their standard of living, while nurturing a creative, respectful and educated new generation.

In the mid-1980s and 90s, despite its great potential to create an intercultural identity out of immigrant communities, the area was overcrowded by interconnected and combined structure for both vehicles and pedestrians, and there was sewage sanitation problems due to the high level of groundwater. To solve this issue, a series of mayors at the head of the city have been struggling to decrease both the traffic problem and the sewage sanitation dilemma over a 12-year period by increasing the width and opening up the streets through a whole new development plan.

The overall framework of the neighbourhood cultural policy was aimed to create the conditions for the emergence of the cultural roots of the immigrant community, to address the cultural needs of ths community and to find native solutions for enhancing communication with the host community.

At first, this caused social resistance, because this space was no longer just a street or passage, but it had become a social space as well, reshaping the area’s identity. To respond to this resistance, urban managers had to reorganise the area with a creative approach, including new-urbanism and pedestrian development, while preserving the socio-cultural centres of the neighbourhoods.

This new development plan limited the space allocated to cars, while putting an emphasis on urban infrastructure development, as well as the establishment of a sewage network and the disposal of surface water in a hygienic way, without changing and disturbing the urban physical structure. A focus was also made on cultural policies through the creation of socio-cultural centres, and with the objective of creating a child-friendly atmosphere. This plan was drawn with a particular attention paid to respecting the shape and proportions of the urban fabric; improving pedestrian space; providing the necessary services to the residents; using and promoting common cultural signs with an emphasis on the identity and native culture of the inhabitants; providing the necessary infrastructure for sewage collection and surface water, and establishing a base for improving the urban environment.

Goals and implementation of the project

The aim of this project is to preserve the cultural characteristics of this multicultural area while improving the use of urban space and business conditions, in order to create a lively urban environment. Its specific objectives include:

"The Sholough Bazar" is located in an emerging, dynamic and young - yet unattractive - area of Mashhad. In 2017, the project began by creating and refining the urban infrastructure to rehabilitate the site. This first generated higher economic profits for local property owners, and created a greater feeling of satisfaction for the residents as the neighbourhood was becoming more economically viable, pleasant and safer.

This traditional marketplace enables a great deal of cultural intermixing and adaptation between the different nationalities, mainsly Afghan and Iranians, due to their common cultural origins.

Meanwhile, meetings have been held with citizens to inform them about the goals and results of this project and, with the help of urban planners and sociologists, the executive plans have been prepared and developed.

The major problems that the plan emphasizes are the area accessibility for cars, air pollution due to non-public transportation system, surface water abundance, ageing and micro-granular urban fabric, and the presence of hydrological flow of urban water supply which damaged the buildings. Another issue was the need to increase women's social presence and children’s self-esteem.

Following the drafting of this plan, an investment group was formed, the urban sewage collection structure was designed and implemented, and in the near future, a wastewater treatment plant will be operated at a suitable distance that will allow water reuse. Also, the channels and system for surface water disposal and neighbouring arteries have been designed and are being implemented.

The project was designed and developed by the municipality of District 5, based on the needs of the citizens of District 5, and was designed and engineered by the Bianyan Traffic Advisor engineers after approval by the Office of Design and Development Studies of Mashhad Municipality. It should be noted that during this process, various academic groups have participated in the study and analysis of the project, and interviews and questionnaires were released to assess the area’s needs and opportunities.

According to its action plan, the project cost is about $950,000 for a 10-months period. Part of this cost has already been financed by the municipality of Mashhad.

The main impact of this project on the local government is a behavioural change in urban management towards a more regional, place-based approach, in this case focused on the area of the marketplace, which considers the outlook as a peripheral environment. This project led to the development of more aggressive transformation strategies, in particular with the organic growth of the market as an incentive to improve the business and living conditions and strengthen the neighbourhood.

Impact on culture and on cultural actors

This project had a strong positive impact on social self-esteem and increased citizens’ participation, for instance in the process of sewage and urban sprawl operations, and through cooperation for drilling and non-interference in the work of the technical group and contractor. Local residents have been able, through neighbourhood’s councils, to negotiate, express their wishes, their needs and opinions on the ongoing flow of space development.

On the other hand, the construction works also directly contributed to a decrease in the incidence of diseases caused by insect bites (leeches).

In the Iranian culture as well as in the country urbanisation process, the concept of "persistence" means "self-extinguishing but not staying": any changes on the urban environment should be flexible enough to adapt to future transformation in terms of local identity and use.

The overall transformation allowed a part of the population, especially young people and girls, commute safer to schools, and Afghan residents could create stronger social bases in the area.

In terms of economic development, a number of activists have been involved in economic issues and discussions, foreign capital was mobilised through international traders, and a commercial-administrative set up was established as the market of nations, to provide the necessary human resources.

The key evaluation mechanism was the introduction of participatory processes, emphasizing the idea that each citizens' satisfaction may be due to the fulfilment of human needs in different ways. It is based on a series of parameters, such as “quality of life”, which generally refers to the environment in which people live, including pollution, quality of housing, as well as some individual characteristics, such as health quality and access.

The quality of the environment fits within the five main categories of physical needs, together with safety and security needs, social needs and social dependence, the need for social respect, and finally the need for improvement.

The training provided to children of the area throughout this project will improve the future level of education and cultural knowledge, and eventually lead to better living conditions. These parameters are incentives stimulating the development of similar places in nearby areas, gradually expanding to other neighbouring blocks.

The Municipality of Mashhad was a candidate for the third "UCLG Mexico City – Culture 21 International Award" (November 2017 – May 2018). The jury for the award drew up its final report in June of 2016, and requested that the Committee on Culture promote this project as one of the good practices to be implemented through Agenda 21 for culture.

This article was written by: Amir Gohari, Project Manager and Hossein Nejad, Head of the Department of Urbanism and Architecture of the Municipality of Mashhad & (International Cooperation Office), Iran 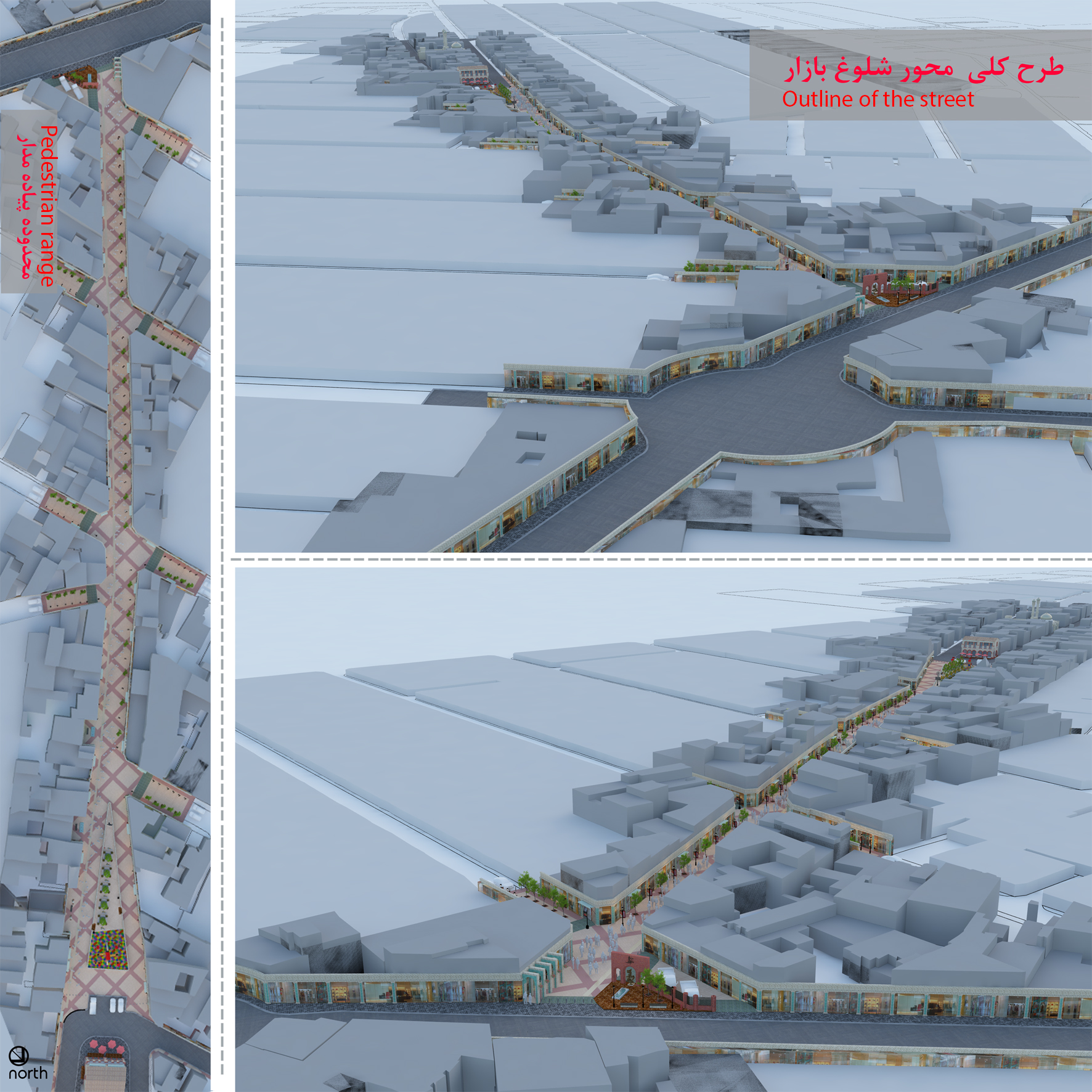