Routes and paths to discover with family

Old Havana belongs to the La Habana Province. One of the main challenges for the region is its high-level infrastructure deterioration, the residential makeup of the city, and the presence of multiple environmental and social problems. One of its main strengths is the historic centre of Old Havana, named a UNESCO World Heritage Site and declared a Priority Conservation Zone.

State public policies in Cuba promote the development of culture. They are based on the freedom of artistic creation, identity, the preservation of cultural heritage, and the country’s rich artistic and historical heritage. The 2030 Comprehensive Strategic Development Plan incorporates this perspective into the unique realities of the historic centre.

In it, Routes and Paths to Discover with Family emerged as a result of the Study on the Impact of the Sociocultural Management of Museums, which examined the level of knowledge the public has about museums in the historic city centre. More than half of the participants were motivated by their group enjoyment of cultural life; and revealed expectations about culture that could be addressed with activities that are already carried out by such institutions, but were unknown to participants.

The objective is to promote appreciation for heritage, as well as awareness around its care and preservation in family groups, by recognizing diversity and the value of local identity.

Routes and Paths democratizes culture, reinforcing the view of cultural heritage as a testament to human creativity and the bedrock of local identity. This initiative safeguards cultural rights through diversity, access, participation, and dialogue.

The project gave a prominent voice to neighbourhood leaders who came together to show the public how unique their neighbourhood structures are, and how cultural projects define their identities.

A number of inclusive actions have emerged that favour participation by people with special education needs, adolescent youth, the elderly, and deaf people.

Routes and Paths is strongly connected to the need to protect and safeguard cultural and natural heritage (SDG 11, Target 11.4). It also promotes awareness around tangible and intangible heritage and the environment (SDG 13, Target 13.3), as well as strengthens the participation of disadvantaged groups and their sense of belonging through accessible and safe initiatives. The project encourages participation by women as guides (SDG 5), and inclusive workshops have been held to empower vulnerable social groups. Additionally, since the inclusion of Creative Spaces Havana, the routes have lent greater visibility to the region’s creative economies (SDG 8), through which collaborative alliances have been established.

Promote appreciation for heritage, as well as awareness around its care and preservation in family groups, by recognizing diversity and the value of local identity.

Routes and paths has transcended the city's cultural events, and added a new dynamic to its cultural life overall. Among others, one of its greatest strengths is the systematic efforts taken by a professional group committed to human development through the adoption of culture and its most central values.

Budget The program is supported through an institutional budget. However, tickets are sold at a price of 5 pesos (CUP), valid for 3 adults and 3 children, accessible to Cuban families, but which do not cover the costs of the project.

Maintaining this program for almost twenty years has been a significant challenge because each iteration requires a new cultural focus to capture the interest of the public.

Given the growth of the project and the high level of interest, the current technological infrastructure limits greater access, interaction with the public, and personalized attention to families.

Other obstacles associated to the harmonious and comprehensive integration of various cultural institutions and their projects, and attracting new audiences, particularly youth.

This cultural proposal has become an excellent space for socialization. The results of the public studies show participants’ satisfaction, highlighting the fact that the program is public, accessible, and personalized, with wellprepared guides and interesting content. In addition, public loyalty has been achieved.

Different institutions have also been involved with the Office of the Historian and it has become a project that has transcended the city’s cultural events.

Routes and Paths has revitalized the cultural life of the Historic Centre, contributing to the cultural development of the community and its inhabitants. Strengthening partnerships with the municipal government is a priority in order to achieve greater participation by inhabitants. In addition, a new training and awareness-raising initiative has begun with government and cultural actors. Neighbourhood leaders and actors have been involved in neighbourhood walks. This has created space for the dissemination and representation of African cultures and exponents of local traditions and cultural expressions.

Routes and Paths has become a benchmark for the development of similar projects in other provinces across the country, replicating the initiative through the various offices of the historian and of conversation in other cities.

Routes and Paths has become a benchmark for the development of similar projects in other provinces. In fact it was granted the Ibero-American Education and Museums Award (2009) and the special Cuerda Viva prize (2020).

Professionals in the Department of Sociocultural Research and Educational Programs plot methodologies, coordinate, and evaluate the network of museums and cultural centres.

One of the lines of research addresses cultural consumption and its relationship to public studies in cultural institutions. The public study has maintained its objectives over the years and has combined a quantitative and qualitative approach to social research.

The key factors for the project’s success are: its underlying vision as a creative development project that is capable of rebuilding according to citizens’ interests and expectations; its character as a public, democratic, multidimensional, accessible, and leisure-focused initiative; and finally its public and consumer research as standard practices.

The Sociocultural Research Group conducts public studies of each initiative, whose results are used to develop the subsequent communication strategy and cultural program.

Each event is allocated a budget which is used to continue funding the main cultural actions.

Its own communication media are essential for promotion.

Havana was a candidate for the fourth UCLG Mexico City – Culture 21 International Award (November 2019 – May 2020). The jury for the award drew up its final report in June of 2020, and requested that the UCLG Committee on Culture promote this project as one of the good practices implemented under Agenda 21 for culture.

This article was written by Katia Cárdenas Jiménez, Director of Cultural Management of the Office of the Historian of Havana City, Cuba.
Contact: katia (at) patrimonio.ohc.cu 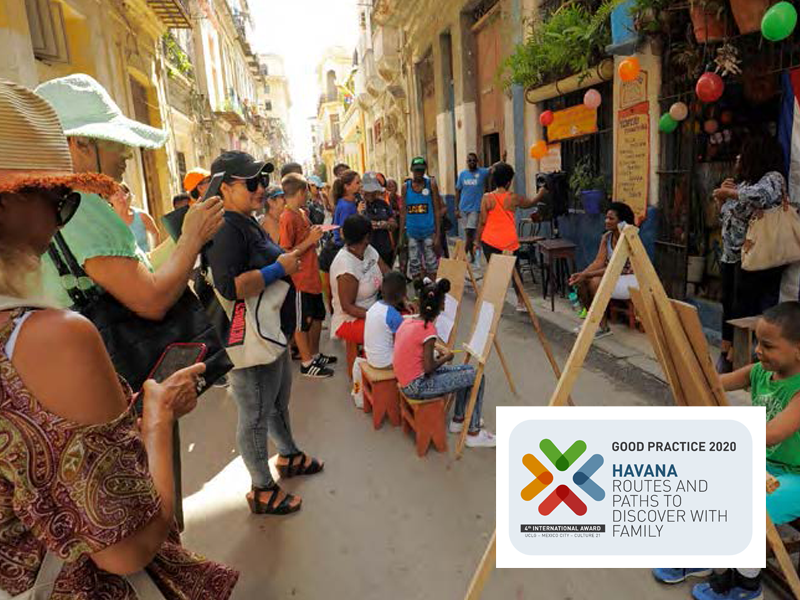