Rome is a city with an enormous historical wealth and cultural heritage; it has been a major human settlement for many centuries. The city is divided into 15 districts. With 91 other municipalities, it makes up the Metropolitan City of Rome Capital, which is located in the central-western area of the Italian Peninsula.

In 2019, Rome had 2,856,133 inhabitants. It is the 7th largest city in Europe. The surface of the municipal district of Rome is large (1,287Km2), and this is one of the key elements that define the urban policies with city planning. The territory of the city includes the urban space of Rome and multiple segregated towns, natural reserves and agricultural areas sparsely populated.

As one of the most important cities of the western world, Rome has a double role as a city and a capital, with an international projection. This involves a double institutional dimension: national Italian authorities manage some of the major institutions existing in the city, which coexist with the institutions of the city of Rome. This condition requires a permanent dialogue between the different levels of government.

The heritage of ancient Rome as well as that of the Renaissance is very present in the city centre and in a part of more distant neighbourhoods, and attracts a high number of tourists and visitors, though this overshadows contemporary and dynamic cultural expressions.

In addition, the preservation of the archaeological remains has limited the metro network. This affects the ability to travel around the city to enjoy, for example, cultural activities, and might have contributed to prevent decentralization of the municipal administration throughout its 15 districts.

The Deputy Mayor for Culture’s Office in Rome is the key actor of local cultural policies in the city. It sets out the strategies for the cultural development of the city of Rome, and deploys policies and programmes concerning cultural activities, cultural institutions, and heritage preservation, enhancement and promotion. It provides strategic and operational guidelines to three municipal Departments: the Department for Culture (which coordinates a set of artistic institutions fully and partially owned by Roma Capitale, and supports its cultural activities and those of local community groups and municipal cultural centres), the Libraries and its network (40 libraries spread across the city) and the Superintendence for Cultural Heritage (which manages, preserves and enhances the archaeological, historical, artistic and monumental heritage belonging to Roma Capitale through a system of 18 museums).

Rome has an impressive institutional cultural offer (theatre, music, cinema, visual arts…), though most of it addresses the city centre. The City Council offers high-quality, innovative and international programmes, since an important part of Roman citizens has demanding interests, needs and cultural practices, although a high number of people (around 40%) is not involved in formal participation in cultural life throughout the year. Therefore, cultural activities could expand and ideally rely on more contemporary social practices and technological forms, especially to reach young people, and involve scientific institutions. Besides, in Rome the alternative cultural sector is very active and offers high-quality programmes and activities.

3. Policies to implement the Right to Participate in Cultural Life

Since September 2016, the Deputy Mayor for Culture’s Office has placed the local implementation of the Right to Participate in Cultural Life at the centre of its policies. This ambition is to massively involve citizens in the cultural life of the city. Policies and programmes are being implemented through institutional and organizational changes. The changes are guided by the following key principles:

The Deputy Mayor for Culture's Office in Rome has placed the local implementation of the Right to Participate in Cultural Life at the centre of its policies.

The new impetus given to the cultural policies of Rome, based on the Right to Participate in Cultural Life, entails the involvement of people in the stages of the policy (design, implementation and evaluation). Thus, the concept of empowerment is being unfolded by: a) providing more spaces for citizen participation, generating bottom-top processes and building capacities in the field of community development; b) emphasizing cultural contemporaneity, launching new programmes devoted to the most avant-garde and innovative options; c) breaking the limits for cultural programmes with more science, thought and knowledge, including issues related to sustainable development.

Accessibility is another fundamental factor of the renewed cultural policies in Rome. In order to be fully people-centred, cultural policies seek to involve all cultural actors in cultural institutions and programmes: the citizens, the artists and the professional teams. New, specific, attractive programmes must be designed so that everyone, with diverse socio-economic backgrounds, gender, sexual orientation, origin or social belonging, recognizes their right to be an active actor of culture and (re)connects with local cultural resources. Work in this area focuses on: a) families as audiences for culture, boosting strategies such as free entrance and tools to provides access to cultural centres; b) indirect work on cultural diversity, acting on the whole of the population.

Networking and systemic thinking is the new approach that accompanies the new internal organisation of cultural policies. It favours the autonomy and accountability of cultural institutions and a more transversal relationship with the central structure, with more cooperation and collaboration mechanisms developed through formal and informal networks. In this regard: a) libraries are becoming unique cultural spaces with wider roles in the territory; b) spaces of live and cultural meaning are emerging in neighbourhoods, with support for their proposals on performing and visual arts; c) seasons and temporary periods structure the annual cultural calendar and allow a bigger impact, with three main programming seasons dedicated to science, communities and contemporary cultural productions.

The new cultural policies of Rome include need to improve governance and guarantee public accountability, and some measures are already being put in place. With regard to improving governance: a) rationalization is fostering a more logical system based on competencies and sectors; b) the relationship between the City Council and local cultural agents is based on opportunities and public calls throughout the year, with an increased budget. As for improving accountability: a) the general mission of cultural institutions is focusing on accessibility; b) the contract-programme is the model for cultural institutions, with a clear set of public accountable commitments; c) new transparent procedures improve quality and facilitate equal opportunities; d) continuity in projects is guaranteed by partnership agreements, and e) a new tracking system to measure the impact of cultural policies is being developed.

Finally, political leadership is providing confidence and coherence at the highest level. The city counts on the Mayor’s support for culture, as expressed in cultural policies, the institutional position of the Councillor for Culture as Vice Mayor of the City Council, and in the budget increase.

This ambition is to massively involve citizens in the cultural life of the city is guided by the following principles: empowerment, accessibility, networks and systemic thinking, governance and accountability, and leadership.

Some examples of the programmes developed are mentioned below:

The new portal for all activities: https://culture.roma.it.

Institutional and organizational changes to place the Right to Participate in Cultural Life at the centre of the cultural policies of Rome with a long-lasting impact shall be complemented with other commitments and actions:

The elaboration of this good practice is based on the document “Rome develops the right to participate in the cultural life of the city”, produced in the framework of the Rome Leading City programme of the UCLG Culture Committee. This programme aims at the elaboration of a global document, the 2020 ROME CHARTER that will develop the Right to Participate in Cultural Life with five human capabilities. Therefore, the Agenda 21 for culture is at the core of the cultural policies of Rome, and informs many of the principles and key measures observed.

Roma Capitale is the vice-chair of the UCLG Committee on Culture. This document was written by Carla Schiavone, Adviser to the Vice Mayor on Cultural Development of Rome. 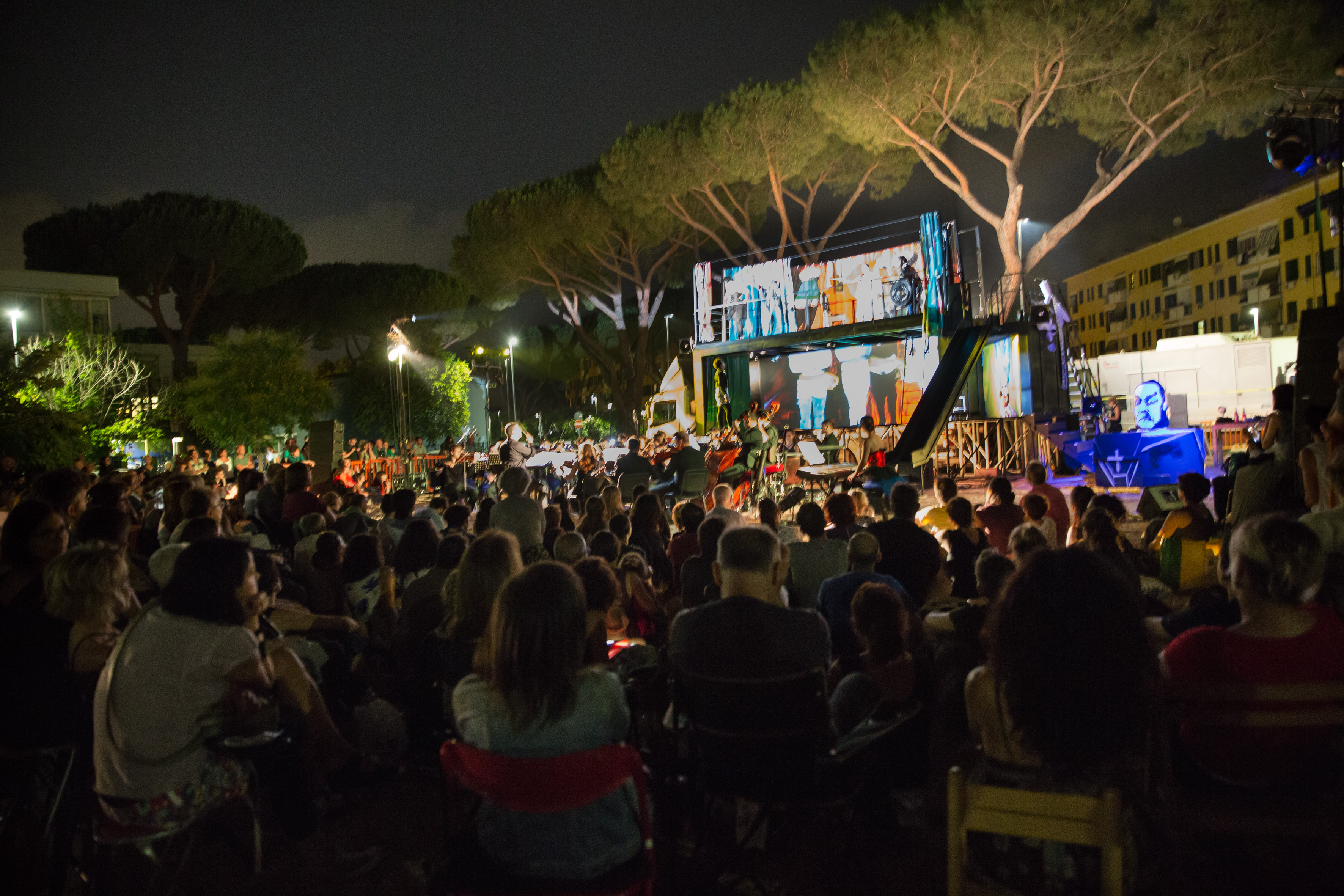