Huechuraba school for talent and the arts

Huechuraba is a commune located in the northern part of Santiago, that is home to over 98,000 inhabitants. It is an important economic and industrial hub that spurs socio-economic and local cultural development, thus growing a diverse and inclusive society within a larger participatory and sustainable territory. However, this exists alongside significant rates of multidimensional poverty, and where disabilities further destabilize the community’s social cohesion and socio-economic development.

It is within this context that access to culture was denied to citizens for many years, primarily because culture was not viewed as a fundamental right for promoting social change. However, even some of the very first programs implemented by the current government framed diversity and universal access to culture as fundamental Human Rights. This paradigm shift made culture and the arts into vital elements in the promotion and dissemination of local identity. In order to effectively ensure substantial participatory inclusion for the over 8,500 community residents with various disabilities, the first Inclusive Arts program was designed and implemented in 2018.

The goal of the project is to develop different skills and talents throughout the commune, promoting inclusion through a learning programme that helps advance arts training across Huechuraba.

In line with the commitment adopted from Agenda 21 for culture (A21C), the Huechuraba’s municipal public policies are primarily based on respect for human rights.

The School for Talent and the Arts was created as a part of a local public policy strategy that encourages inclusive artistic development and focuses on cultural diversity, sustainability, participatory democracy, and inclusion, thereby connecting citizenship with culture through a concrete and tangible initiative. Also, different guidelines for good practices are being developed, including strengthening community networks and interpersonal human relationships that can be sustainable over time.

The school responds to Action 6 in A21C, which promotes culture as a tool for equity and social inclusion. It also relates to cultural rights, as detailed online under international development agendas, specifically the United Nations Sustainable Development Goals (SDGs). The founding principle for the school is that inclusion is a basic fundamental rule for cities, spaces, and public services. Indeed, this adheres to one of the most important and encompassing goals of the 17 SDGs: to make cities inclusive, safe, resilient, and sustainable spaces, as well as protecting and safeguarding the world’s cultural and natural heritage.

Also in line with the SDGs, the school has emphasized including and developing a gender perspective with artistic skills.

The general goal of the program is to guarantee people’s right to access art and culture by developing different skills and talents, as well as by improving arts training throughout the commune. This is to be  achieved by promoting inclusion with a learning program offering workshops and classes in different art forms (singing, dance, theatre, painting, and music).

This program emerged in response to a need for spaces that provide engaged residents with multidisciplinary and inclusive training or development in artistic and cultural practices that is both formal and annual. The school has helped residents with motor, hearing, visual, and intellectual disabilities.

Specific objectives include promoting, strengthening, supporting, and lending visibility to local artistic expressions as the region’s cultural hallmarks, the recruitment of local talent, and providing tools to integrate them into daily life. This intervention also makes it possible to observe vital dynamics and thus be able to complement and support them in a comprehensive way.

Through its foundations in training, the school has created a dynamic program adapted to the demand of the community, in which is has established close ties between participants and teachers. In turn, parents have also developed a parallel network.

The population that would benefit from the project, originally considered during the initial phase in 2017, was children and youth between 6 and 29 years of age. As of 2018, children aged 3 years and older were included.

Currently, they are separated by age group and aimed at anyone 3 years and older.

The school’s main activities include offering weekly courses and workshops to the commune that have already been in operation for more than three years and that have been very well-received by the community. Also, the 2017 and 2018 Talent Shows brought together hundreds of people to showcase what has been worked on throughout the year.

The Phases of the program followed a pedagogical framework that was adapted to each discipline and teacher. It began with theoretical and introductory training, followed by a practical phase for artistic development, and ended with an assessment of results, culminating in the Talent Show.

The programme emerged in response to a need for human and material resources, which provide residents with an inclusive space for comprehensive development and training that is both formal and annual.

The municipality of Huechuraba continuously works with a number of artistic and cultural institutions, organizations, and foundations, both national and regional, which allows the city to collaborate on and develop educational artistic leisure events both inside and outside of the commune. For example, in 2019 students attended orchestra and dance performances at renowned venues across the country, such as the Municipal Theatre of Santiago, CORPARTES, and the GAM Foundation.

The budget for one year of work includes approximately 100 hours of class each week with excellent teachers, materials, and annual graduation-type events.

Generally, the school has not presented any major obstacles to the development of the stated goals and objectives. Thanks to the diligent, ongoing efforts of the multidisciplinary teams working for the municipality, the school has been well-received by the community. In time, and along with the clear needs of the project, organizers plan to increase the capacity to welcome more participants. Of course, this would also entail an increase in budget.

The impact of the Talent and the Arts program has been significant, both for the over 150 participants that have been a part of it since the beginning, and for its social impact, which is evident in the fact that the number of participants is constantly increasing.

The impact of the municipal program has been important because of its view of culture for individuals and the significance of the Institution for families. The wealth generated has also had an impact on the content it delivers and creates. This has made it possible to create living histories of Huechuraba, such as the large interdisciplinary project to commemorate the 50th anniversary of La Pincoya.

By successfully setting up the School for Talent and the Arts, the local government has been strengthened by the positive impact. Through consistent targeted actions, a large number of residents have been able to develop or learn artistic skills. Additionally, participants have been able to create important connections with the community, fostering better reciprocal relationships and dialogue. The result of this has been improved community wellbeing.

The impact can be seen in the fact that all residents, especially women and persons with disabilities, have equal opportunity to exercise their human rights and access culture and the arts.

The broader impact on the city/region and its population can be seen in the fact that all residents exercise their human rights and enjoy access culture and the arts, while also ensuring gender equality and equal opportunities.

So far, general and basic evaluation strategies have been considered for the project. These include contrasting participation statistics with the proposed target figures, as well as periodic evaluations to develop artistic techniques.

In addition, the current evaluation methods examine the graduation and exposition activities of each workshop with a retrospective review of teachers. Other methods have included lists of participants and attendance at the workshops.

The following have contributed to the school’s success: the consistency of the interventions as an annual programme with regular classes and workshops; the involvement of each participant’s direct care network and connections; extra-curricular activities; and the quality of the teachers and project leaders, who could deliver adapted teaching strategies while obtaining comprehensive and inclusive results.

It is essential for the local government to continue the school and ensure it remains as a long-term training centre.

The 2020 budget saw an increase for teachers and material resources. The goal was to improve and increase community access, as well as to further diversify the types of courses offered and improve their quality.

Finally, the year-end performance showcases what students have learned. It is a multidisciplinary and inclusive montage with students as the storytellers of their own reality.

Huechuraba was a candidate for the fourth UCLG Mexico City – Culture 21 International Award (November 2019 – May 2020). The jury for the award drew up its final report in June of 2020, and requested that the UCLG Committee on Culture promote this project as one of the good practices implemented under Agenda 21 for culture.

This article was written by Bárbara Urquieta, Head of Public Relations, Municipality of Huechuraba. 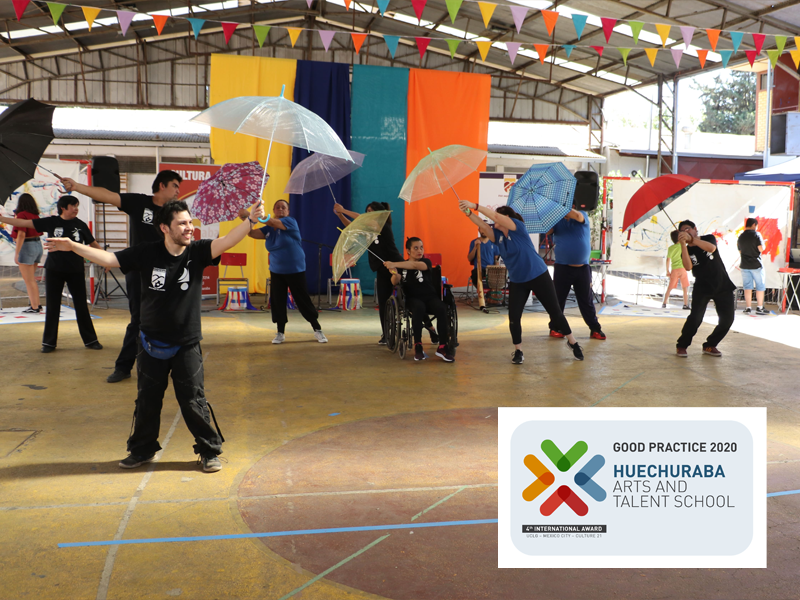