Quebec has 8.3 million inhabitants, 78% of whom are Francophones. This represents 86% of all French speakers in Canada. Outside Quebec, Francophones represent 4.5% of the Canadian population, including Acadian Francophones, who make up a group of communities sharing a unique national identity, most of whom live in the province of New Brunswick.

The Arts and the City Network was established in 1987 in response to the needs of Canada's Francophone municipalities for cultural development, and to ensure their vitality in a predominantly Anglophone North American context. This recognised charity has close to 640 members, including 500 from the municipal sector and 140 from the cultural sector. It is firmly established in Quebec, and represents more than 75% of its population.

In 2011, the Quebec government became the first state in the world to adopt the Agenda 21 for culture (A21C) as a benchmark framework. The following year, the Arts and the City Network developed its Membership Charter in line with Agenda 21 for culture and the principles of sustainable development.

It soon became apparent that few municipalities in Québec, apart from Montréal and some others, were aware of A21C. As a result, a significant awareness-raising campaign was carried out.

Given its influence throughout Quebec and the Acadian and Canadian Francophone communities, the Arts and the City Network was ideally positioned to educate Canadian municipalities on these new frameworks. Since then, the network has focused its activities on promoting culture as a key part of sustainable development in its member communities.

In 2014, as part of the reflection process led by the UCLG Committee on Culture  for "Culture 21: Actions", the Arts and the City Network considered possible actions to support Canadian French-speaking municipalities in their sustainable development approaches based on culture. In 2015, thanks to the support of the Quebec Ministry of Culture and Communications, the province's member cities and organizations in the network were consulted on the development of a declaration on "Culture 21: Actions" , as well as on an awareness-raising strategy for Quebec communities on A21C and "Culture 21: Actions".

Following this consultation, the Arts and the City Network Declaration on the implementation of these approaches in Quebec was tabled at the UCLG Culture Summit on "Culture and Sustainable Cities" (March 2015, Bilbao, Spain). Finally, an awareness-raising strategy for the entire province of Quebec as well as Acadian and Canadian Francophone communities was developed under the name of "Culture Action Strategy".

The main focus of the Culture Action Strategy is to raise awareness of Quebec communities, as well as of Acadian and Canadian Francophones, related to Agenda 21 for culture and Culture 21: Actions, by demonstrating how these tools can become real drivers of sustainable development at the local level.

The 2nd focus of this strategy, which involves setting up cultural workshops, is geared towards:

The 3rd focus of the strategy involves establishing a network of ambassadors, aimed at:

Three main actions have been implemented, each addressing one key element of the Culture Action Strategy:

1. Tools to Reinforce Understanding and Adoption

Clinics have been set up to support local, regional, or even urban municipalities wishing to start or continue the implementation of Agenda 21 for culture in their area. The Arts and the City Network coordinated the implementation and promotion of these support workshops.

During an expert-led working day under the leadership of a municipality or borough, the cultural clinics provided a participatory and cross-cutting learning and exchange space for local actors from all walks of life including education, culture, health, business, environment, and more. By focusing on the unique realities of a community, as well as on the aspirations of its citizens around the sustainable development of their community, the clinics helped establish a common vision for local development, in addition to concrete lines of action and mobilization.

Following the cultural clinic, a report of activities and recommendations was given to the community. It was developed based on the lines of action prioritised and proposed by participants, in order to outline a local action plan for the implementation of Agenda 21 for culture.

Providing support for communities on Agenda 21 for culture has become one of the three main approaches of the arts and the city network for the coming years. Moreover, the network has a master plan for qimplementing Agenda 21 for Culture to ensure its transversality.

To date, fourteen cultural clinics were organised between January 2017 and April 2019, including eleven in the province of Quebec: in the cities of Cowansville, Chibougamau, Val-d'Or, Trois-Rivières, Sutton, and Baie-Saint-Paul; in the Montreal boroughs of Rivière-des-Prairies, Pointe-aux-Trembles, and Montreal-Nord; and in the regional county municipalities (RCMs) of L'Islet, Fjord-du-Saguenay, and Argenteuil. Additionally, three workshops were held in Acadian and Canadian Francophone communities: in the village of Rogersville and in the rural community of Haut-Madawaska, New Brunswick, as well as in the village of Saint-Pierre-Jolys, Manitoba.

As part of the organization of these clinics, the Arts and the City Network worked in close collaboration with the municipalities, at the regional level, at all stages of the process, by establishing real partnerships.

The Arts and the City Network has set up a network of professionals who help publicize Agenda 21 for culture across Quebec. As key stakeholders in their respective communities, these ambassadors work with the Arts and the City Network to inform elected officials, citizens, and local stakeholders about the importance of integrating the cultural sphere into all areas of society. There are currently nine, spread across eight regions of Quebec, who have benefited from three dedicated training and exchange sessions to help them in their outreach.

One of the main partners in this strategy, the Quebec Ministry of Culture and Communications, has funded the implementation process of this network of ambassadors, as well as the first four cultural clinics in the province. The Quebec Secretariat for Canadian Relations funded the three cultural clinics that took place in Acadian and Canadian Francophone communities. In addition, the Quebec Ministry of Municipal Affairs and Housing subsidized the construction of five other clinics in Quebec. The City of Vaudreuil-Dorion, leading city of the Agenda 21 of the culture of UCLG, is a privileged partner for the implementation of the Action Culture Strategy.

The implementation of the Culture Action Strategy has created lasting synergies at the local level and increased the cultural capacities of municipalities. In this sense, the Culture Action Strategy has led to greater accountability of local actors in their development, as well as the decentralization of work by various municipal services and civil society organizations.

Through the Culture Action Strategy, the Arts and the City Network has strengthened its expertise and leadership on the national stage, which has led to more awareness-raising activities for Agenda 21 for culture, a wider dissemination of advocacy, and increased presence at events or working committees on these topics.

The Arts and the City Network was part of the organizing committee of a regional conference on culture and health in 2017 and 2018. Similarly, the annual conference of the Arts and the City Network contributes each year to the training of hundreds of elected officials, municipal officials and cultural workers around issues related to Agenda 21 for culture. For example, the network's 31st annual conference in 2018, was held on the theme Territory, Identity, and Belonging.

The Culture Action Strategy is reviewed periodically by the Board of Directors of the Arts and the City Network and at the Annual General Meeting of the members of the organization. The number of participating municipalities provides an indicator of the interest of cities to take part in this movement.

The key factors for the success of this project include cooperation between the different cities and the horizontal relationships between the members of the Network. Another factor has been to take into account the distinct character of each environment in the search for specific solutions: each community is unique, has its own issues, and, above all, has aspirations and creative solutions that only apply to them.

The Arts and the City Network has integrated the Culture Action Strategy in its strategic planning for 2018-2021 and in the accompanying action plan. The majority of municipalities that have hosted a cultural clinic have finally integrated it into a broader approach, such as with the development of a culture policy (as in the RCM of L'Islet), a culture action plan (as in the Montreal-Nord borough), or a sustainable development policy (as in Cowansville).

The City of Vaudreuil-Dorion has been a candidate for the third edition of the "UCLG Mexico City – Culture 21 International Award" (November 2017 - May 2018). The jury for the award drew up its final report in June of 2016, and requested that the UCLG Committee on Culture highlight this project as a good practice in the implementation of Agenda 21 for culture, as a special mention for the third awarding of the Prize.

This article was written by David Pepin, in charge of the Agenda 21 for culture activities, Arts and the City Network. 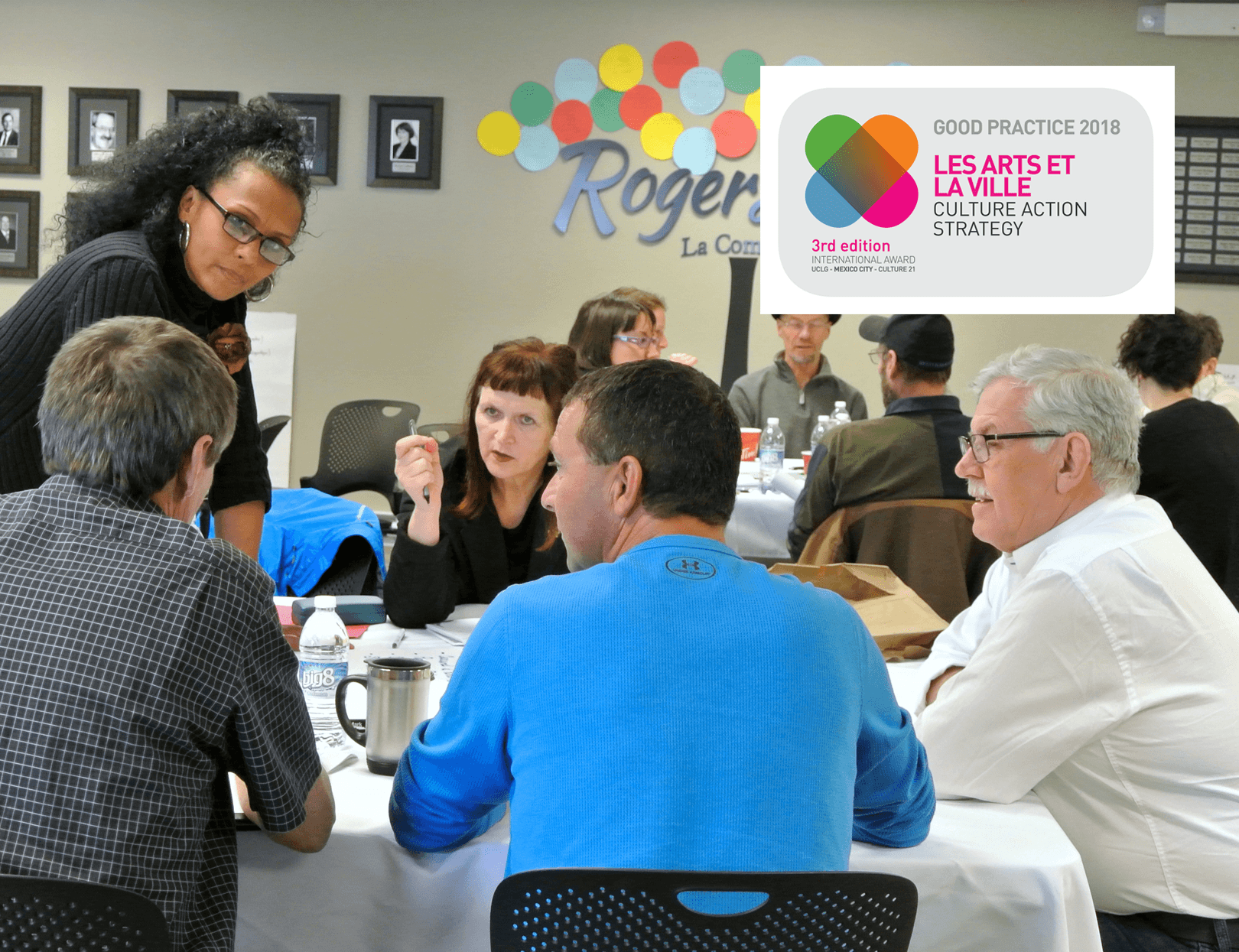