For 8000 years, the Anishinaabe have lived the Abitibi-Témiscamingue. After a law was passed in 1876, First Nations children were forced to attend residential schools and reserves were created, resulting in these groups losing their culture and language. Together, these led to cultural genocide.

The region includes seven Indigenous communities. These communities are separated by geography, language (English and French), and different tribal councils.

The Anishinaabe First Nation, like many others in Quebec, is in a process of cultural reconstruction. Even just a few years ago, there were no cultural organization to unite communities. In residential schools, all Indigenous peoples were taught to be ashamed of their identity and culture. It is therefore vital to return their access to their own culture and to help re-establish pride in their identity.

As recently as 2011, there were no indications for visitors that Abitibi-Témiscamingue was an ancient Algonquin territory. The Anishinaabe were invisible to the community. The Truth and Reconciliation Commission of Canada published a report whose recommendations served as the basis for Culturat’s actions. This led to the creation of Minwashin.

In 2015, a consultation space was created to unite these communities: the Anishinaabe Cultural Circle. Culture, which was originally used to destroy them, has now become a tool that empowers Indigenous communities to rebuild themselves and restore pride to their people.

Several public works of art, tourism projects, school workshops, and co-creations emerged from this initiative, bridging gaps between populations. The negative view of Indigenous populations that has been propagated in
different forms of media is gradually being reversed through better links between communities and the spread of positive images of First Nations peoples.

Through its implementation of Culturat, Tourism Abitibi-Témiscamingue supported the creation of Minwashin, a deeply Anishinaabe cultural organization. This represented a big step toward the nation’s cultural reconstruction. By supporting this initiative financially and administratively, Culturat has been able to continue focusing on its overarching goals while also putting the power to develop cultural life, as well as to revitalize language and heritage, back in the hands of First Nations communities.

The overall objective of Abitibi-Témiscamingue's cultural policy is to make art and culture the pillars of sustainable human development by implementing a sustainable cultural development programme.

Culturat is very much inspired by Agenda 21 for culture. It mobilizes an entire population around the well-being of everyone and peace between peoples, thanks to arts and culture. It creates partnerships between cities, RCMs, Indigenous communities, organizations, and citizens, as well as between cultural, economic, educational, and artistic environments.

Minwashin works with Culturat and other regional organizations to defend the cultural rights of the Anishinaabe First Nation. This includes facilitating exchange, emphasizing the importance of including communities in decisionmaking processes, promoting the emergence of Anishinaabe artists, and facilitating language-saving actions. These lines of action were inspired by the report of the Canadian Truth and Reconciliation Commission, which includes 94 calls to action to right the harmful injustices done to Indigenous communities.

Culturat’s main goal is to mobilize the population of Abitibi-Témiscamingue around an innovative, creative, unifying, and structuring movement that is focused on identity, the arts and culture as areas of action, respect for differences, and large-scale progress. As such, it supported the creation of Minwashin, which has been tasked with supporting, developing, and showcase Anishinaabe arts, language, and culture.

In 2012, following the CED recommendation to protect and appreciate First Nations culture throughout the region, Tourism Abitibi-Témiscamingue sought to prioritize this line of action with the CULTURAT project, under the patronage of the Canadian Commission for UNESCO (CCUNESCO). In 2017, Minwashin was officially founded and undertook the First Nations component of Culturat, with the support of Tourism Abitibi-Témiscamingue.

Culturat First Nations seeks to create opportunities for exchange and networking in order to boost culture so that projects can be implemented at the regional level. This involves organizing regular local and regional meetings, creating spaces for dialogue and collaboration, the development of awareness-raising campaigns, and the creation of specific and adapted tools. Minwashin strives toward this goal by bringing together all the Anishinaabe communities in Quebec, while building partnerships with organizations in the region.

Bringing different people together requires understanding one another and their history. By inspiring the Anishinaabe to reclaim their cultural identity, Culturat First Nations helped to bring about cultural initiatives and encourage the population of Abitibi-Témiscamingue to develop partnerships with them. Minwashin continued this process by changing the way the Anishinaabe population was portrayed in media to be more positive in virtual communication, radio stories, and documentary series, among others.

The authority of Tourism AT combined with Culturat’s reputation have been instrumental in facilitating exchange between Indigenous communities and regional, national, and international organizations. This partnership has also been vital in ensuring the representation and participation of communities in decision-making processes, as well as involvement in different government bodies, at various levels and in several areas, such as language or tourism.

This focus is now entirely overseen by Minwashin, which allows direct contact between these organizations and members of the Anishinaabe culture.

Project development in the communities has become more diversified and Minwashin provides support for their creation and implementation. The following are all projects led by Minwashin: strengthening synergies between Anishinaabe radio stations; creating exhibitions and organizing cultural and creative events that reflect both Anishinaabe culture and language; creating a heritage project; developing adaptive training programs.

By understanding that knowledge reduces inequity and promotes empowerment, Minwashin aims to transfer and improve knowledge, know-how, and skills in communities through the appreciation of Anishinaabe culture, awareness, and language. The initiative also aims to support Anishinaabe artists in their work, and in carrying out research projects related to Anishinaabe cultural heritage.

Perhaps the most important result of the program is the change in mentality that is taking place, especially among the school age population, which reflects a mutual desire to understand and recognize themselves through arts and culture. More and more festivals in the region are adding Indigenous elements to their event schedules. Algonquin culture is now present in the community. Indigenous artists have emerged and are recognized both locally and outside the region. The Indigenous art community has taken shape and is being seen and heard. Additionally, an annual gathering called Miaja has been established around culture, identity, and language.

The first Miajain event was in 2018, and had 150 attendees. The following year, the number of participants doubled. Representatives from outside of the area, including the Head of the Assembly of the First Nations of Quebec and Labrador, as well as all the linguists from the First Nation, were present. The Council of Priests has prioritized bringing people together by providing funding to Minwashin.

Culturat and Minwashin are benchmark programs because of their innovative approach and significant results. They are a great opportunity for the development of Abitibi-Témiscamingue.

The Culturat process has been the subject of two surveys, a strategic work plan, and a documentary. Minwashin conducted strategic planning, where it consulted with community leaders and Indigenous cultural leaders. It also worked in close collaboration with the University of Quebec in Abitibi-Témiscamingue and the University of Ottawa.

The main strength of Culturat is the way it has mobilized an entire regional community around identity and culture. A survey conducted in 2019 found that 89% of the region’s population considered Culturat to be an essential step in the area’s development.

Culturat has taken a humanistic approach, focusing on cost, patience, understanding, and in-person exchange, which ensures a regular presence in communities. The inclusion aspect of this approach is also one of its main reasons for success. It promotes the creation of links and networks between sectors, giving rise to multiple projects involving artists: municipal projects, business projects, school activities, projects between Indigenous and non-Indigenous artists, and others.

The creation of Minwashin itself is a vital achievement, as it empowers the Anishinaabe First Nation to take control of its own cultural development.

Minwashin uses self-determination and strong assertion to ensure that actions aimed at bringing together Indigenous and non-Indigenous populations will continue to raise awareness and appreciation around Algonquin culture.

The collaboration between Minwashin and Tourism Abitibi-Témiscamingue, as part of Culturat, will continue in the future through the implementation of various projects.

The Abitibi-Témiscamingue region was a candidate for the fourth UCLG Mexico City – Culture 21 International Award (November 2019 – May2020). The jury for the award drew up its final report in June of 2020, and requested that the UCLG Committee on Culture promote this project as one of the good practices implemented under Agenda 21 for culture.

This article was written by Pascale Charlebois, Consultant on the Coordination of Culturat, Tourism Abitibi-Témiscamingue, Rouyn-Noranda, Quebec, Canada. 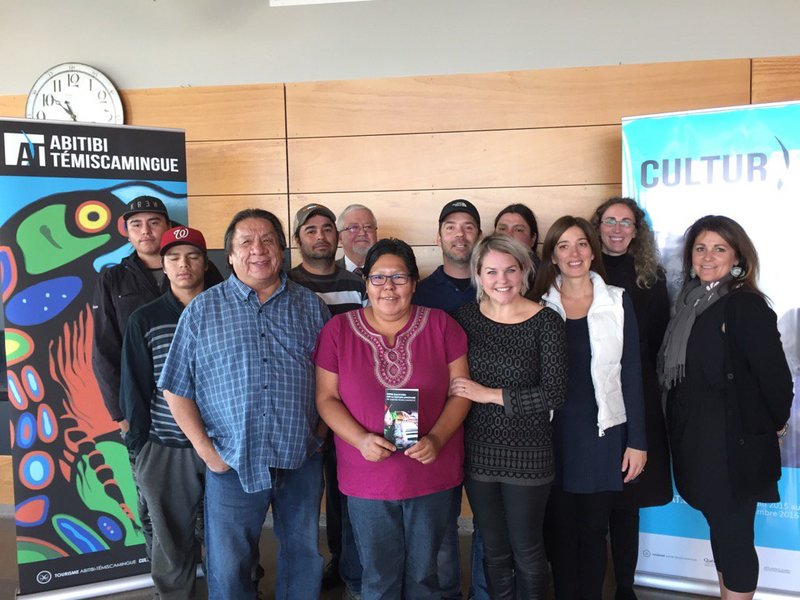