The canton of Antonio Ante is located in Imbabura, Ecuador, and its population accounts for 14.46% of the total population of the province. This number is growing at approximately 2.5% per year, making this canton the second most thriving population in Imbabura. The city's rural population of 25,350 inhabitants is just slightly above that of the urban population of 24,650. There are 25,650 men as compared to 24,350 women. With regard to ethnic distribution, there are 75% mixed, followed by 18% from the Indigenous population, and a minor, 5% black population, as well as 2% Caucasian.

With a shared interculturality and space, each group can exhibit its unique identity through agricultural productivity, gastronomy, or diverse production and culture. Alongside Andrade Marín, Atuntaqui has established itself as the area's centre for textiles and craftsmanship.

The Imbabura Factory building was once abandoned, but the municipal government restored the building so that this piece of history would not be forgotten. Various activities were undertaken by a number of bodies in order to find an alternative use for the facilities. In May of 2001, a request was submitted to declare the Imbabura Textile Factory and its surrounding structures a National Cultural Heritage site. This was ultimately granted but other problems subsequently arose. The funding required for its restoration needed to be secured and number of state bodies were approached to find alternative investment in the project. The municipality designed the "Imbabura Factory Cultural Centre" project whose goal was to convert what was left of the factory into a hub for social, cultural, and production development in the canton, The project involved designating over 80% of the physical area to building an archaeological, ethnographic, and textile museum. A second space was dedicated to local development with a recreation area. This joint architectural and heritage initiative is a significant historical landmark in the cultural identity of Antonio Ante.

The primary goal of the project was to comprehensively develop and strengthen culture, tourism, and productivity, as well as to use the museum to reestablish the importance of local history and culture for national and international visitors.

One of the objectives of the Land Management and Development Plan is to solidify local identity, and strengthen cultural development in the canton through the protection, restoration, and beautification of heritage. The Imbabura Factory complex is a multidisciplinary project based on culture, heritage, tourism, and the sectors of education and production. This has helped to fortify cultural identity and lay a solid foundation for creating new opportunities and activities that maintain community traditions.

Furthermore, investment into the National Institute of Cultural Heritage is a commitment by the local government and inhabitants to preserving and caring for property that is vital for the canton's productivity. Indeed, this goes hand in hand with cultural activity.

Since opening its doors on May 5th, 2014, the museum has become one of the main tourist attractions in the province of Imbabura. It is a public space for free expression that helps visitors understand the origin of the textile tradition. As a result, this helps to save collective and individual memory. Responsible and participative management of heritage has strengthened the institution through coordination with various social, academic and cultural organisations. This has facilitated the integration of social groups, disadvantaged groups, as well as both public and private education institutions. It also helps guarantee, preserve, and spread awareness of heritage as a common good. The project focuses on the transmitting knowledge through recruitment programmes geared towards strengthening skills and improving resources for entrepreneurs in different fields, particularly in handicrafts and textiles.

Responsible and participative management of heritage has strengthened the institution... This has facilitated the integration of social groups, disadvantaged groups, as well as both public and private education institutions. It also helps guarantee, preserve, and spread awareness of heritage as a common good.

To comprehensively develop and strengthen culture, tourism, and productivity; to provide national and international visitors with a museum that re-establishes the importance of history and local culture, to create a welcoming and functional centre for conventions and events, a gastronomic area for traditional Imbabura food, a space to exhibit and sell local crafts, and a centre for technology transfer that provides support to all productive sectors; to do this with a management model that coordinates public, private, and community efforts to promote sustainable regional development.

Specifically, the goal was to restore the Imbabura property. This began by bringing together citizens concerned about the dilapidated state of these facilities that once made up the largest textile centre in the northern region of the country, around which over 50% of the population was economically based.

Actions taken by the municipality to achieve this began in 2001 with the request to declare the Imbabura Factory and its neighbouring hydroelectric power station a National Cultural Heritage site. In 2007, management of activities was successfully transferred from the Ecuadorian Social Security Institute to the Autonomous Decentralised Government of Antonio Ante. This made it possible to present the "Imbabura Factory Cultural Centre" project to the central government.

The initiative reignites a restlessness and curiosity for learning, reflection, and the pursuit of knowledge, generating collective appropriation of creativity, critical thinking, and artistic cultural dissemination throughout the territory.

The initial phase was to receive approval for the project by the Ecuadorian Cultural Heritage Institute, and to subsequently secure funding from the Ministry of Culture. The declaration of the project as a Presidential Commitment generated significant interest at the national level. As a result, a management commission was formed and led at that time by the Ministry of Heritage, which acted as a coordinator and was responsible for undertaking rebuilding and restoration activities. The second phase involved proposing a management model for recovered property to the municipality, which involved creating a public entity that would guarantee the project's sustainability.

This initiative could not have moved forward without partnerships between different bodies, whose collaboration helped in undertaking activities. The Imbabura Provincial Government and the Ecuadorian Populorum Progresio Fund collaborated to outline contributions in order to carry out the Diverse and Productive Imbabura project. Fashion designers and embroidery artisans also created collections that represented different cultures, such as the Indigenous and Afro-Ecuadorian populations who are based in the province of Imbabura. These types of projects strengthen the creativity and productivity of the area's inhabitants.

Citizens of the canton and the province benefit from the cultural activities carried out by the Imbabura Factory Complex. The museum supports education institutions with its informal education centre that strengthens the knowledge of its students. In addition to this, it is a familiar space that re-emphasises the value of history. There is also a theatre/auditorium where free, unique cultural performances are staged in order to bolster the music, dance, and theatre communities. It has forayed into film screenings with a view to broadening cultural activities through visual artistic processes, while reigniting a restlessness and curiosity for learning, reflection, and the pursuit of knowledge. It is also geared toward generating collective appropriation of creativity, critical thinking, and artistic cultural dissemination throughout the territory.

The project has empowered the population and had a positive impact on the municipal administration. This is evident in the creation of more opportunities and the opening of new spaces for cultural representation across the canton and the province. The local government has been recognised by various entities for its active support of cultural development, which has transformed into institutional strengthening, and pushed it to commit to continue working on the project.

Visitors to the Imbabura Factory museum can enjoy seeing the old machinery, delve into the fascinating history, and learn about the origin of the textile tradition in Antonio Ante. Furthermore, cultural growth has been driven by assigning spaces to artistic expressions, such as temporary paint or photography exhibits.

Given that the facilities are used as a proper space for cultural activities, coupled with the fact that they are part of the area's Industrial Cultural Heritage, the space provides the population with a greater rapprochement and openness in presenting different artistic expressions. Holiday courses for children have given them the opportunity to make the most of their free time by developing and strengthening skills as well as getting involved in sports activities.

The Imbabura Factory complex has become one of the province's main attractions. It also highlights the importance of other public institutions such as the Ferrocarriles del Ecuador [Ecuadorian Railways Company] given the factory’s popularity as one of the top destinations on the train system. It has successfully attracted a greater number of visitors to the area, while establishing synergy with the commercial centre of the city. Visitors come to learn about the impact that textile production had on the country, as well as the history taught through the different elements of the Imbabura Factory project. The convention centre has established a need for complementary services such as food, security, cleaning, and household services, among others. As a result it has provided employment opportunities in these areas. The strengthening and formalisation of some of these sectors has revitalised the economy. This is also due to the fact that these services are not only required for specific events at the factory, but rather that the need for them has spread to other public and private institutions.

Evaluation tools include statistics on income, data on the number of visitors from the textile industry, as well as the different events organised and developed at the convention centre and events facilities. Public satisfaction was assessed through surveys and the level of public attendance at free social and cultural activities. The popularity of the Imbabura Factory is reflected in the increased number of proposed projects.

Given that the facilities are used as a proper space for cultural activities, coupled with the fact that it is part of the area's industrial cultural heritage, the space provides the population with a greater rapprochement and openness in presenting different artistic expressions.

Continuity is assured through the company's self-management, and through conventions and events held at the facilities.

Antonio Ante was a candidate for the second "UCLG Mexico City – Culture 21 International Award" (January - May of 2016). The jury for the award drew up its final report in June of 2016, and requested that the Committee on Culture promote this project as one of the good practices to be implemented through Agenda 21 for culture. 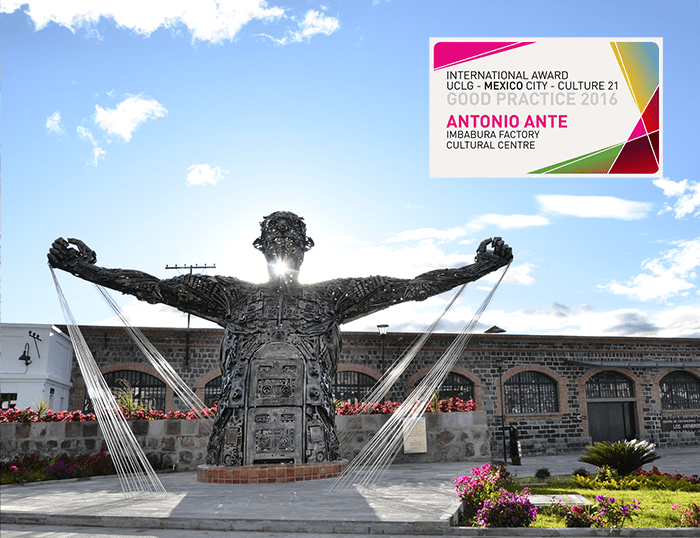