Yopougon is the largest commune in the Côte d’Ivoire and one of the 13 communes in the District of Abidjan. With a surface area of 153 Km2, it was created in 1970 within the framework of an urban planning project to balance the sprawl of Abidjan. It is composed of residential areas and zones of economic activity, which absorbed the traditional villages without eradicating their socio-political and cultural organisation.

With a population of around two million inhabitants, Yopougon is home to an industrial zone that attracted populations coming as a result of the internal rural exodus and West-African migratory flows. It is the primary cultural centre of Abidjan. It boasts the highest rate of educational establishments and a multitude of artists, associations and selfemployed entrepreneurs that play a key role in the cultural dynamic. Despite these assets, the economic crisis of the 1990s and the politico-military crises of 2000 and 2011 threatened Yopougon’s cohesion.

Cultural decentralisation is recent in the Côte d’Ivoire, it began in 2003. In 2014, the Côte d’Ivoire developed a national cultural policy document aiming to safeguard national cultural heritage and professionalise the arts and culture sector, with a view to place culture at the centre of development strategies. Since 2015, the City Council has taken these guidelines into account in its local development strategy.

Through educational and creative programmes focusing on social cohesion and the economic and social inclusion of young people and disadvantaged groups, the programme places the human rights of all at the heart of its work.

Today, the Commune’s challenge is to implement these sectoral policies and educational and creative cultural programmes in order to respond to the policy priorities of its human, urban and economic development. This concerns young people and their artistic, civic, technical and professional training; the development of creativity and job creation within a dynamic that strengthens social cohesion, and equal access to local facilities, including in precarious neighbourhoods. In the sectoral plan, the priorities for 2020 are the policies and programmes for the development of reading, the promotion of the performing arts and the revision of the 2011 cultural strategy, in the light of digitalisation and the SDGs.

The aim of the action plan is to make Yopougon an educational, creative and inclusive city. In a context where action has been sporadic, it aims to drive a shift in paradigm to make culture the linchpin of innovation in municipal action, in conjunction with all the economic, social, environmental and cultural challenges of sustainable urban development.

The “Yopougon: Becoming an educational and creative city through social cohesion” programme places the inclusion of the most vulnerable people, the human, economic, social and cultural rights of all, and the development of a spirit of initiative and solidarity at the heart of its action.

The programme aims to achieve the following specific goals:

The challenge is to implement educational and creative policies and programmes to address its human, urban and economic development in an environmentally sound manner.

The implementation of Yopougon’s vision of cultural development is currently structured in three phases. The first phase consisted in the study of the context, the identification of resources and potentialities and the development of a strategic plan to enhance Yopougon’s cultural and touristic resources. The second phase began in 2013 with the implementation of two structuring sub-programmes for the provision of cultural services to the population and the structuring of the Department for Socio-Cultural A¢airs. It is being undertaken in parallel with the third phase, initiated in 2019, which focuses on the strengthening of cultural actors and CSOs.

The programme’s priority targets are:

Sub-programme I: Strengthening of social cohesion through socio-cultural actions:

Sub-programme II: Urban regeneration for the renovation and construction of socio-cultural infrastructures:

The new approach has promoted the recognition of cultural actors, youth associations and women's groups, as well as a better consideration of their aspirations and difficulties, thus strengthening the youth and women's associations involved in the various projects.

The key projects of the Programme “Yopougon: Becoming an educational and creative city through social cohesion” have been carried out thanks to international partnerships, which have undertaken the definition of logical frameworks and indicators, monitoring, and arrangements for mid-term reviews and evaluations at the end of each project.

In view of the large number of specific objectives and indicators, each phase of the programme was carried out in accordance with the principles adopted during the preparation of the evaluation and indicators.

To measure the indicators identified, monitoring and information-gathering charts were prepared, as were interviews with beneficiary representatives, meeting reports and activity progress reports.

Exchanges of trainers and activities will be carried out between Yopougon’s YOP-Crealab and Abobo’s Babylab towards digital production, with a focus on children and young people.

The mediators trained within the framework of “Generation Positive” will be involved in the future activities of the YOP-Crealab by its founding partners. The mediation activities related to reading and the creation of a management association for the MSJ guarantee the sustainability of their action. The City Council plans to include operating aid in the structure of its annual budget.

Yopougon was a candidate for the fourth “UCLG Mexico City – Culture 21 International Award” (November 2019 – May 2020). The jury for the award drew up its final report in July of 2020, and requested that the Committee on Culture promote this project as one of the good practices to be implemented through Agenda 21 for culture. 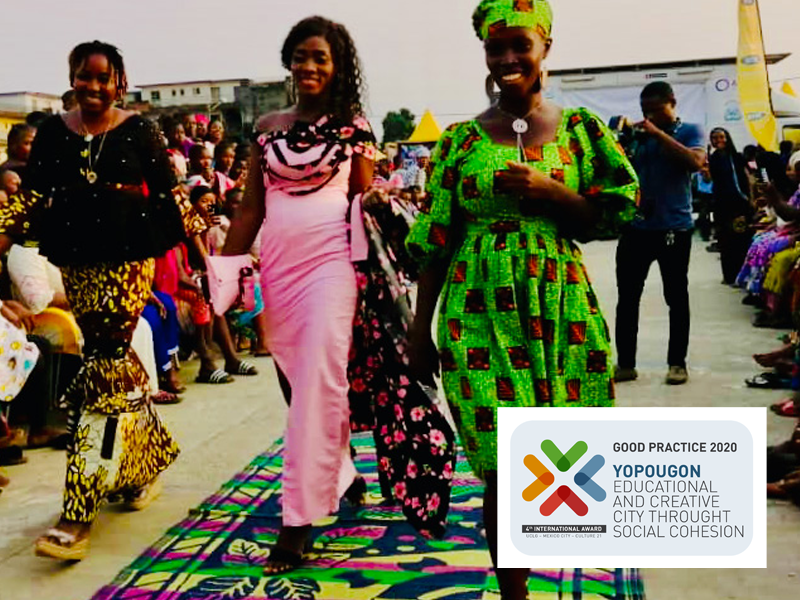