LAM 360° (Land Art Mongolia, LAM) is a biennial art festival located in Mongolia. LAM focuses on land art as a form of spatial visualisation of the relations between nature, culture and social policies. It strongly promotes freedom of expression in joining people and institutions from all sectors of Mongolian society by interconnecting their respective backgrounds and perspectives through collaboration and networking actions of regional and global scope. Ulaanbaatar, the capital of Mongolia, hosts the Public Art Program, which aims to support the citizens of Ulaanbaatar in active participation on issues of sustainability and nature protection through environmental art.

In 2006, LAM was initiated on the occasion of a Land Art Symposium in Bor Undur, Gobi (a small village near Sianshand, a day trip from Ulaanbaatar) by Marc Schmitz. Since its inception and first edition in 2010, the biennial has taken place every two years in dierent regions of Mongolia. As the achievements of the rural nomadic world view seem to be forgotten in today’s urban context of the city of Ulaanbaatar, LAM supports the discussion of these issues.

The first biennial was curated by the Indian Canadian art critic Robin Alexander Suri, and approximately 30 international artists were invited from around the globe to the Gobi Desert to realise site-specific art projects. The final exhibition and a symposium were held in the National Gallery in Ulaanbaatar.

In subsequent editions of the biennial, venues were accompanied by a public symposium at the Academy of Science – bringing together Mongolian and international speakers – and by an exhibition, both of which were held in Ulaanbaatar. The biennials were accompanied by a catalogue, with a full documentation of each artistic work. Moreover, in 2015 LAM hosted a presentation at Palazzo Zorzi (Palazzo di UNESCO at Venezia) during the opening of the 56th Venice Biennial.

“Ulaanbaatar Public Art Week” was established in 2017 and held in its second edition in September/October 2019.

As the achievements of the rural nomadic world view seem to be forgotten in today's urban context of the city of Ulaanbaatar, LAM supports the discussion of these issues.

LAM aims to incite an advanced discourse on cultural and social policy which will take up environmental and social sustainability, with a strong emphasis on the most vulnerable sectors of society in Mongolia (such as, nomadic people, ethnic minorities, non-commercial cultural organisations and youth) in the context of cultural transformation in Central Asia.

The “Ulaanbaatar Public Art Week” is a bi-annual event that takes place throughout the city of Ulaanbaatar and consists out of a number of get-together activities including an international public conference, contemporary art exhibitions and public art interventions. The “Public Art Week” is executed in the years between LAM’s Contemporary Art Biennial and forecasts the upcoming biennial’s themes. Both the biennial and the “Public Art Week” bring important global topics such as climate and democracy to Ulaanbaatar and create dialogue with the citizens of the city through artistic interventions, cultural experts and speakers.

Both the biennal and the public art weel bring important global topics such as climate and democracy to Ulaanbaatar and create dialogue with the citizens of the city.

LAM publishes an open call for Mongolian artists to realise public art interventions during the art week within the urban context, as well as for participating in the exhibition. From a high number of incoming proposals five projects are selected by the curatorial team and each project is supported with a production grant. There have been art interventions all over Ulaanbaatar in very diverse neighbourhoods, for instance in the underpass of the Chinggis Avenue near the department store, the Naraantool market and others. For the final exhibition LAM also invites international artists to collaborate with these five Mongolian artists.

Since its beginning, a major task has been the funding activity for LAM. Funding has mostly been granted by international institutions. For the future, LAM would however imagine working on a closer level with the local governmental institutions in order to provide the ongoing financial sustainability of the project.

One impact that LAM is proud of is the international relevance that the project has demonstrated. LAM was invited for several presentations at international events such as: at the Asia Summit in Manila, the Kochi Biennial in India, the World Biennial Forum in Gwangju (Korea), Sharjah Biennial in the Emirates and the International Conference in Shanghai 2019.

LAM has also established an exchange for artists to other international events, such as at the Bangkok Biennial in 2020, the Venice Biennial in 2017 or at Yatoo Korea in 2019.

The impact of LAM's activities has been an enormous one on the development of contemporary art and culture in Ulaanbaatar and Mongolia.

The impact of LAM’s activities, such as the contemporary Art Biennial and the “Ulaanbaatar Public Art Week”, has been an enormous one on the development of contemporary art and culture in Ulaanbaatar and Mongolia. It has formed the cultural landscape and put Ulaanbaatar on the international cultural map.

Evaluations are made on several levels, starting with the reports to our donors, financial brace down and tax declarations. There has also been positive feedback from participating artists, the cultural sector and the media.

When LAM was founded 10 years ago, it was very di¦cult for contemporary art in Mongolia to find exhibition opportunities, funding or recognition. There was a profound need in helping young artists to realise their ideas and projects and present them to the public. Overall, the cultural scene has developed greatly since 2010; individual artists have been awarded international prizes and Mongolia has become an active player in the art scene. We often hear about the importance of our initiative for the development of Mongolian artists, but we also get feedback from visitors and the public, who highly appreciate the presentations of nomadic narratives that are open to the public.

LAM hopes to further establish the collaboration with the office of the Mayor of Ulaanbaatar. Additionally, the Program of the Public Art Week is reaching out to other international cities to form yearly partnerships, a fact that could enrich the agenda of Ulaanbaatar and its partners.

Ulaanbaatar was a candidate for the fourth “UCLG Mexico City – Culture 21 International Award” (November 2019 – May 2020). The jury for the award drew up its final report in July of 2020, and requested that the Committee on Culture promote this project as one of the good practices to be implemented through Agenda 21 for culture.
This article was written by Marc Schmitz Ser-Od, Artistic and Executive Director of LAM, Ulaanbaatar, Mongolia. 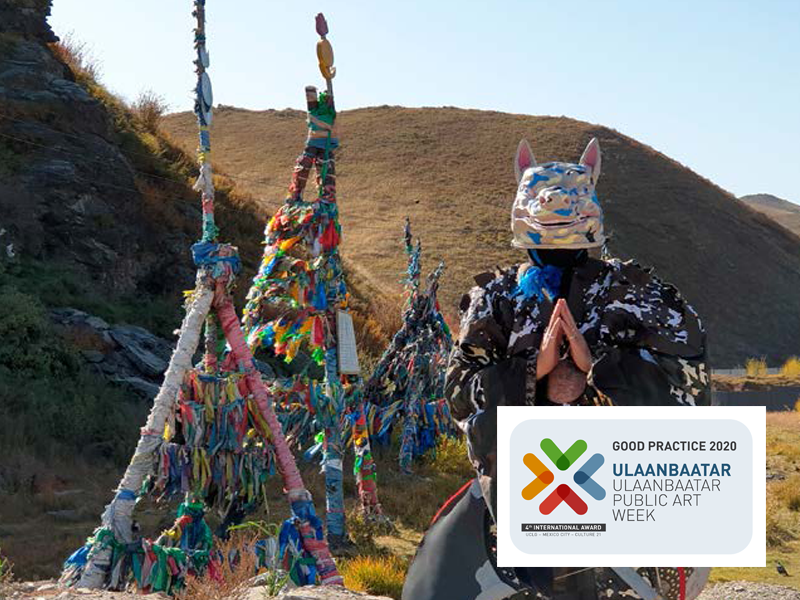