Thirty years of construction and transformation

Donostia/San Sebastian is home to 187,949 people. It is located in the Basque Country, 20 kilometres from the border of France.

Donostia/San Sebastian has per capita GDP of 40,755, in addition to a strong ecosystem around science and innovation, as well as basic and applied research centres. Currently, 53,809 people work for 8,138 knowledge-based companies, and 60.7% of the population between the ages of 30 and 34 has completed tertiary studies.

For years, Donostia/San Sebastian focused on hosting its important summer cultural festivals. However, in 1990 the approach changed substantially. Culture required a broader, more comprehensive, more inclusive, and less temporary perspective. A geographically balanced policy was adopted to cater to all generations through a process of immersion, learning, and growth for audiences. This inclusive policy set aside older elitist and selective approaches to address people’s democratic right to access culture.

By overcoming the outdated tendency of keeping culture on the margins of municipal policy, over the next 30 years the project transformed the city’s public space, social balance, citizens’ self-worth, coexistence, and the level of involvement and participation in the collaborative management of public governance.

The overall objective has been to turn culture into the transformative core of a city that once faced stagnation.

The commitment and leadership of the city council to this end has been vital. They created a system that was capable of responding to demands, challenges, and objectives that extend far beyond the cultural sphere, such as its contribution to the processes of social and political standardization.

The overall objective has been to turn culture into the transformative core of a city that once faced stagnation due to its unique environment and high standards of well-being.

The initiative has also sought to transform a city that was torn apart by violence, focused only on occasional festivals, and which desperately needed to connect with the world. This was achieved by promoting inclusiveness, crosscutting work, diversity, democracy, participation, inclusion, heritage, conservation, cultural differences and plurality, as well as by building sustainable, meritocratic, friendly, and supporting public spaces.

The project focused on adding emotion, soul, and vitality back into to the city by ensuring citizens’ engagement, pride, and self-worth. To do so, it tackled concrete issues through specific, targeted policies. For example, it addressed the lack of facilities in areas far from the city centre, and the need to reform and adapt existing cultural facilities and historical buildings.

There were no cutbacks or lulls. Indeed, every moment of this three-decade process has seen a step toward strengthening the city's cultural policy.

The initial idea was to implement change for all citizens regardless of class, background, or education, and with no neighbourhood left behind. To do so, up to 11 cultural centres were opened in different parts of the city, starting in 1986 with the Altza neighbourhood, a densely populated area with a large immigrant population. The sociocultural map of the city began to take shape.

However, the initiative adheres to the demands from citizens in different neighbourhoods for new facilities.

Indeed, every moment of this process has seen a step toward strengthening the city’s cultural policy. What was initially established as a Municipal Board of Culture became a public entity that would provide essential legal and economic support to the progress made so far. At each step, new services and programs were established that could operate autonomously.

The local government has led the project over this entire period, indicating that the various mayors and top cultural policy makers are the highest-level public representatives in this area. This has lent greater credibility and authority to cultural policies. One notable event was the fact that the city was named the European Capital of Culture in 2016. It is clear that the municipal leaders have completely revived San Sebastian’s cultural life and its civil society initiatives. As a result, the city’s government has successfully created an ecosystem where public and private agents share the spotlight.

Before specific departments were created within the City Council, Donostia Kultura had already spent time working in areas that are now included in the 2030 Agenda for Sustainable Development. These reinforce a path that was previously followed by the Department of Culture. As noted in work done by the Ikertalde Consultancy Group, the economic and social impact of Donostia Kultura, as well as the economic success of cultural activity are both significant achievements. In addition to the project’s impact on culture in Donostia, its ability to create the Chillida Leku or Tabakalera cultural centres stands out as successful initiatives.

Thanks to the cultural policies implemented over the last 30 years, today Donostia’s society is more cohesive and committed to development, civic engagement, and critical approaches. In addition, there is coordinated program between the capital and the regional government of Gipuzkoa in the field of culture. The inhabitants of San Sebastian and Gipuzkoa benefit from each other’s services, programs, and facilities. A part of Donostia Kultura’s partners come from the territory, which has itself established a complementary and mutually-beneficial dynamic.

Policy implementation has followed a rigorous methodology of systematic evaluation. Each department of Donostia Kultura continuously collects any statistical data that rigorously and objectively reflects the present state of culture. Partial data is written in the Annual Report, a document that records the milestones that have happened during the year, and which aims to reflect the evolution in behaviours and attitudes of the citizenry, including both the positive and negative trends in those changes.

The key to the success of Donostia's cultural policy has been to build a solid foundation: instead pof building impressive facilities that may not always be able to host events, the city has instead docused on efficiently providing access to cultural services.

The key to the success of Donostia’s cultural policy has been to build a solid foundation: instead of building impressive facilities that may not always be able to host events, the city has instead focused on efficiently providing access to cultural services. Before it had a major centre for contemporary culture, San Sebastian created a cultural ecosystem of ten cultural centres, twenty libraries, six performing arts centres, and six museums. These were established based on social and geographical criteria that create a solid base for the implementation of cultural
policies.

It should also be noted that coordinated joint civil society and institutional actions have reinforced the success of the underlying objectives thanks to their partnership and a climate of mutual trust. This collaborative model has ensured commitment to, and participation in, cultural policies that strive toward the actions outlined in the 2030 Agenda for Sustainable Development.

These three decades of growth and well-being ended with a radically different paradigm that required establishing a new narrative. It simply is not possible to reuse the same recipes and formulae for different scenarios. Of course, this is primarily where the challenge lies. Donostia Kultura has significant level of organizational influence and financial capacity to respond to evolving demands. Currently, its large-scale objective is to find a way to attract new audiences, specifically the youngest age group, between the ages of 16 and 30. As a result, it has established a new commission to boost reading habits to prepare youth for the increasingly rapid change of the 21st century.

San Sebastian has five campuses of many other university institutions. The goal is to establish an effective alliance with the education sector and the university sector, and subsequently build synergies with the cultural sphere. Without the involvement of younger generations, and their contributions, culture simply cannot survive.

Donostia/San Sebastián was a candidate for the fourth UCLG Mexico City – Culture 21 International Award (November 2019 – May 2020). The jury for the award drew up its final report in June of 2020, and requested that the UCLG Committee on Culture promote this project as one of the good practices implemented under Agenda 21 for culture. 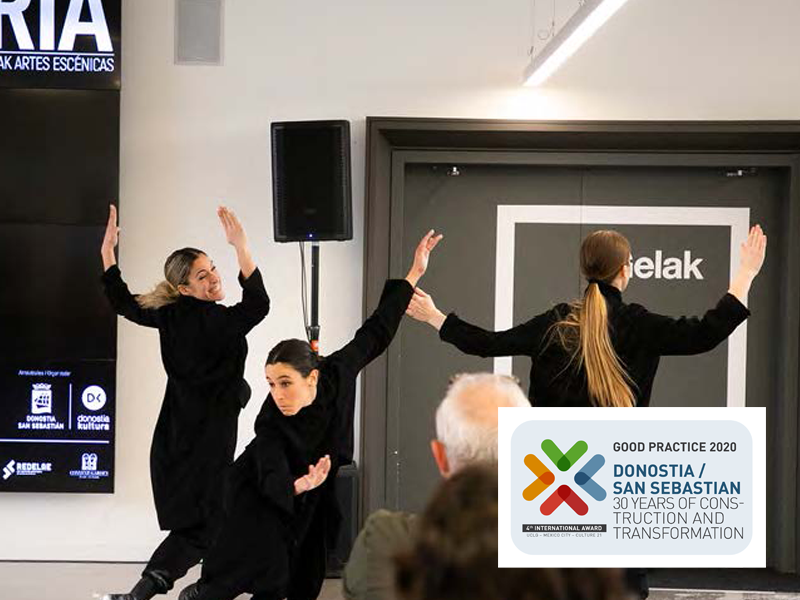